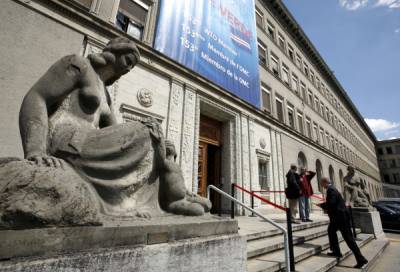 The states that are part of the WTO have been unflattering about some of the actions of the United States. Washington was even accused of attacks on "independence." The criticism of the organization’s members was caused by a US veto imposed on the extension of the authority of the South Korean judge Chan Son Hwa, who is at the head of the appeals body. The Americans “blocked” this judge simply because they did not like his decisions in disputes concerning US interests.


Washington is accused of undermining the foundations of the World Trade Organization. Criticism happened after the US vetoed the reappointment of a judge from South Korea. EU and legal scholars warn: the right of veto threatens the impartiality of the global merchant court.

He writes about it Financial Times.

Opponents of the United States argue that Washington is losing faith in the WTO and is preparing for a major economic “battle” with China, and therefore is working on measures of anti-dumping protection against cheap imports.

Washington informed members of the WTO that it could not support the appointment of a second Korean candidate, South Korean Chan Sona Hwa, who is at the head of the WTO Appeal Body.

Meanwhile, this judge is a respected expert in international trade law in South Korea.

The appeals body is not an academic body that investigates problems simply because they are “of interest,” members of the organization said in Washington. And the appeals body needs nothing to "participate in abstract discussions."

However, the Americans objected. And objected collectively.

WTO members, including Brazil, Japan and the European Union, reminded the United States that the appointment of judges for a second four-year term was accepted in the organization. And blocking an appointment runs the risk of undermining the very foundations of the appeals instance and even the independence of the court. The entire system of litigation in the WTO may be in question.

This is of particular concern to WTO members, since the resolution of trade disputes is considered a strong link in this intergovernmental organization.

Experts believe that this is an unprecedented case, representing a very serious threat to the independence and impartiality of the current and future members of the appeals instance.

Robert Azevedo, WTO Director General, on the objections of the United States noted that "they have their own problems," and now they have given them "explicitly."

At the same time, he acknowledged that the reappointment of judges is a “sensitive issue” and raised a discussion about the possibility of limiting the terms of office. Some participants proposed to appoint to the posts of appeal for one seven-year term.

The article also notes that this US intervention may have a further impact on the fate of the expected decisions of the appeals body. Among the issues that are expected to be resolved soon, there is one Chinese: whether the Chinese economy has the right to be considered “market”. The answer “yes” would be an important indication of status within the WTO. The status would help Beijing fight against the anti-dumping barriers that are put against it on both sides of the Atlantic. Beijing itself claims that it should be given this status “automatically” in December 2016 of the year, on the 15 anniversary of the country's accession to the WTO. However, the United States and some opponents of China in Europe insist that the text of the agreement on China’s accession to the WTO is “ambiguous”, and therefore the question must be brought to the meeting of the appeals body.

Greg Schaffer, a law expert at the University of California, said that Washington turned politics into a matter that should be legally resolved. As a result, America began to look like a “bully,” and not as a “champion of the principles of the rule of law.”

Vladimir Olenchenko, a Russian political scientist and senior researcher at the Center for European Studies at the Institute for World Economy and International Relations of the Russian Academy of Sciences, believes that Washington is teaching WTO partners to different rules in international trade.

“It’s not to say that this is an isolated fact that falls outside the general line of conduct of the United States in the WTO and in other international organizations. Previously, countries showed indifference when the United States behaved like this only in relation to Russia. Now Washington, apparently, has rejected all sorts of taboos and is doing what it needs. And maybe trying to put pressure on these countries ", - said the expert radio "Sputnik".

In addition, he believes that now the United States will focus not on the WTO, but on the Transatlantic and Trans-Pacific Partnerships: “If the United States succeeds in monopolizing decisions in both agreements, then, of course, the WTO will become a sort of“ appendage ”to these organizations. And, apparently, the US is already beginning to gradually accustom its partners to the fact that Washington will dictate its will and set the rules. ”

Professor of the Department of Foreign Policy Activity of Russia of the Russian Presidential Academy of National Economy and Public Administration under the President of the Russian Federation Alexander Mikhaylenko also thinks so. He believes that Washington wants to take advantage of the crisis in the WTO to develop its own trade structures.

“The WTO is in crisis,” said the expert. "Free Press". - The Doha Round negotiations on the future of the organization, which began in 2001, did not move forward. Now there are discussions about whether to continue this process or start negotiations from scratch. The main reason is that there are contradictions between developing countries that are gaining ever greater economic power and importance and developed countries in finding a new balance of power. ” Americans are trying to promote the Trans-Pacific and Transatlantic trade partnership, says Mikhailenko.

“In the case of the Transatlantic Partnership between the US and the EU, it is clearly seen how the Americans are putting pressure on the Europeans to conclude an agreement as soon as possible and on the proposed conditions. But Europe is not satisfied with this agreement by far. The United States is used to being hegemones, but they no longer have it that way. They can remain the dominant force, but for this it is necessary to negotiate with partners, but they do not know how, because they are used to push. In the Swiss newspaper "Le Matin" recently wrote that Americans feel themselves masters of the world, therefore they put pressure on everyone, including their partners and allies. "

In this regard, the expert noted that it would probably be beneficial for Americans to see the appeals body affected by the degradation processes in the WTO. "It is possible that in order to show everyone that the entire system of world trade needs to be changed, Washington would like to deliberately stop this body," said the professor.

Washington has once again indicated to their "partners" their real place. However, the partners did not want to put up with the will of the "hegemon".

On the other hand, the processes of degradation of the WTO, the very organization that Russia has been striving to join for many years, uncovered with a crash.

Today it is obvious that Americans are preparing to reshape the system of international trade so that it fully corresponds to the will of the owners of the entire planet - their will.

Observed and commented on Oleg Chuvakin
- especially for topwar.ru
Ctrl Enter
Noticed oshЫbku Highlight text and press. Ctrl + Enter
We are
Results of the week. “He was terribly unlucky, especially on Friday”And what about our WTO?
Military Reviewin Yandex News
Military Reviewin Google News
27 comments
Information
Dear reader, to leave comments on the publication, you must sign in.