International Children's Day with tears in their eyes 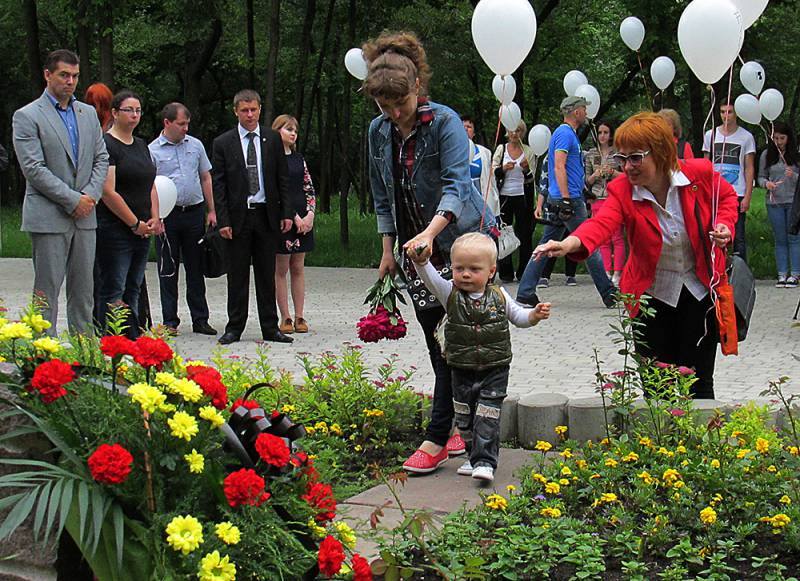 The silhouette of the girl and the number of 101 ... One hundred and one children died during the shelling of Donbass ... Donetsk artists recently painted a mournful emblem on the wounded walls of the airport as a sign of their memory. The same emblem - on white balloons, which 1 June, on International Children's Day, soared into the sky. 101 balloon - let every child - there - will have its own ... 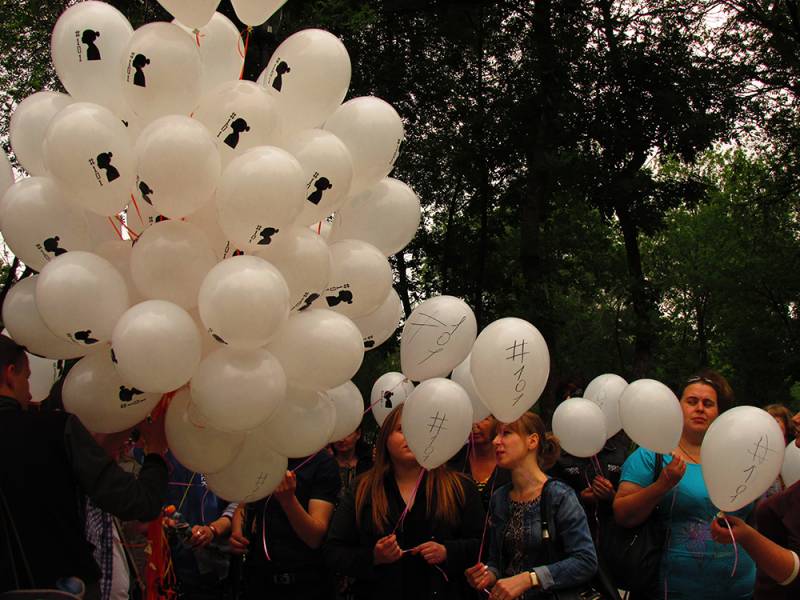 Now the Donetsk residents have become more cautious in critical situations, they know how to behave in the event of something ... Therefore, the recent fierce shelling by ukroratels of the Kuybyshevsky district of Donetsk (which occurred on the night of May 28) has done without victims. But several houses and apartments were destroyed. Shortly before this shelling, the Tuv family from Gorlovka was recalled. A year ago, the girl Katia died, forever remaining 11-year-old. The shelling also claimed the lives of her father, and her mother and younger brother were seriously injured.

Children's Day is a reason to remember not only the little angels of Donbass. 30 May 1999 in Yugoslavia during the NATO bombing killed a young, gifted Sanya Milenkovich - a girl-mathematician, who probably could have become a great scientist. And 31 of May of the same year - NATO criminals deprived the life of two-year-old Marko Simic and his father. They walked around the city of Novi Pazar, when the “democratic” bomb exploded nearby ...

But the children of Yugoslavia for NATO and the “enlightened world” are just “collateral victims.” And the killed little grandsons of the Libyan leader Muammar Al-Gaddafi are “legitimate targets” (as high-ranking NATO officials said at the time).

On Children's Day, you can again remember with sorrow in your heart how many little inhabitants of the planet suffer from poverty, hunger, thirst, exploitation (and sometimes even outright slavery), drug addiction, child prostitution and other vices. A lot of these flaws could be eliminated if the money spent on the barbaric bombardments of Yugoslavia, Iraq, Libya, on the support of terrorists from the “Syrian opposition” and on other unseemly goals would be spent on helping children. But hundreds of millions of children are deprived of the right to some decent life.

And still - in Yugoslavia, and in Afghanistan, and in Iraq, and in Libya, and in Syria, and in the Donbas, and in other parts of the world - many, many children, by the efforts of Washington and its allies, had already chosen the right and life itself ... But even for the loudest international crimes, not a single American or Western European president answered.

For the time being, Mr Poroshenko also did not answer for the suffering and blood of Donbass. Moreover, he continues to enjoy the patronage of his masters - those who put him on the Ukrainian throne.

“What, if not fascism?” Asked posters with portraits of murderers, with photos of the “Right Sector” ... On June 1, hundreds of Donetsk residents came to the Alley of Angels. 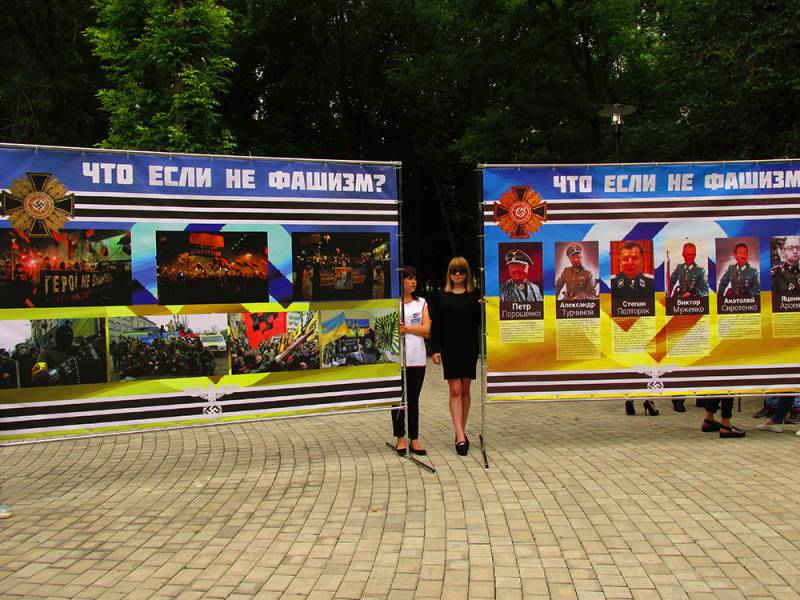 This alley appeared a year ago in the capital of the mining region - it is dedicated to the memory of children killed by ukrohuntoy. People held flowers, toys and white balloons in their hands. And on these balls - the same emblem that appeared on the walls of the Donetsk airport.

“I remember how last year, an alley of memory was opened on this very spot. I then cried. And I am not ashamed of this, ”said one of the most famous warriors-defenders of Donbass, Eduard Basurin. “Because every child who left this life did not want to become an angel.” He would like to remain a child and live. ” 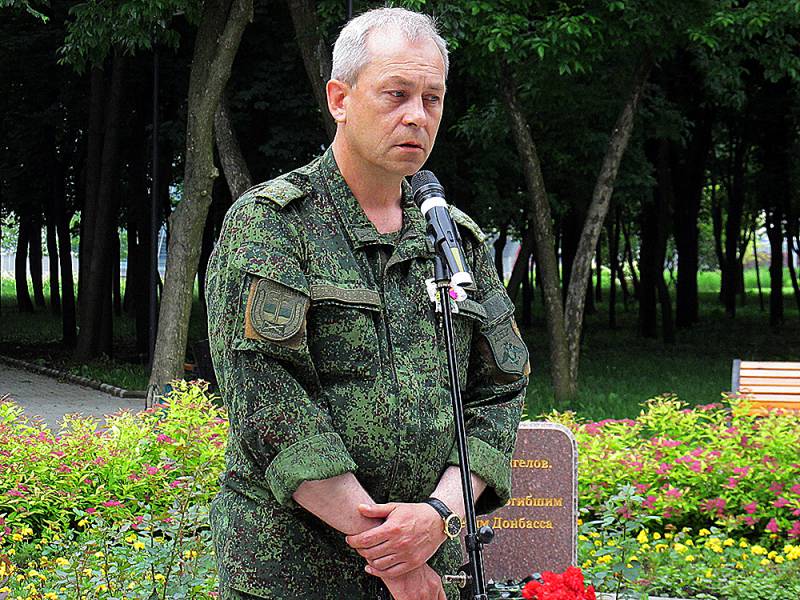 Young poetess brought with them touching poems dedicated to the memory of the fallen. The poet Anna Revyakina, before reading her lines, said that she wanted to come here with her son, but he said that he could not. Because he is a boy, and boys should not cry ...

Let my city live without fear of lead
Let the children play and the wind blows the sheets.
Otherwise, we will have to enter in the passport
Instead of the city To the painful city After, -

Two journalists from Western countries, Finn Janus Putkonen, director of DONI International News Agency, as well as Frenchwoman Christelle Nean, came to commemorate the memory of the children of Donbass and express their condolences. These are people who are trying in every possible way to break the information blockade around the unjust war unleashed by the Poroshenko junta.

“In the rest of the world, people are having wonderful holidays in honor of this day - Children's Day. But here we remember those we lost. Those forces that caused so much destruction and misfortune to our people also caused an information blockade that does not allow us to tell the world the truth about what is happening here. Every day I meet with families who have lost someone from their loved ones. And I have no words to express the pain they are experiencing. I, together with the staff of our agency, make every effort to break through the information blockade and convey to the whole world the truth about what the West is doing. I sincerely hope that next year we, together with the rest of the world, will organize holidays for children and will celebrate Peace Day here, ”said Janus Putkonen. 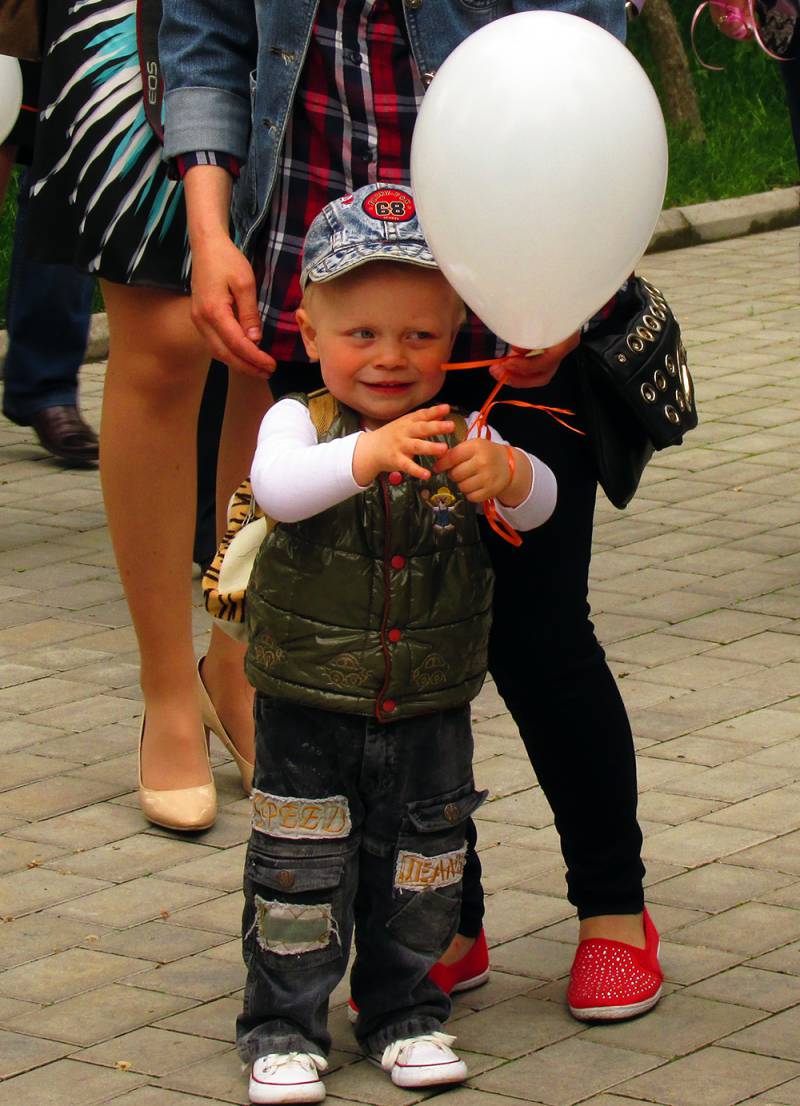 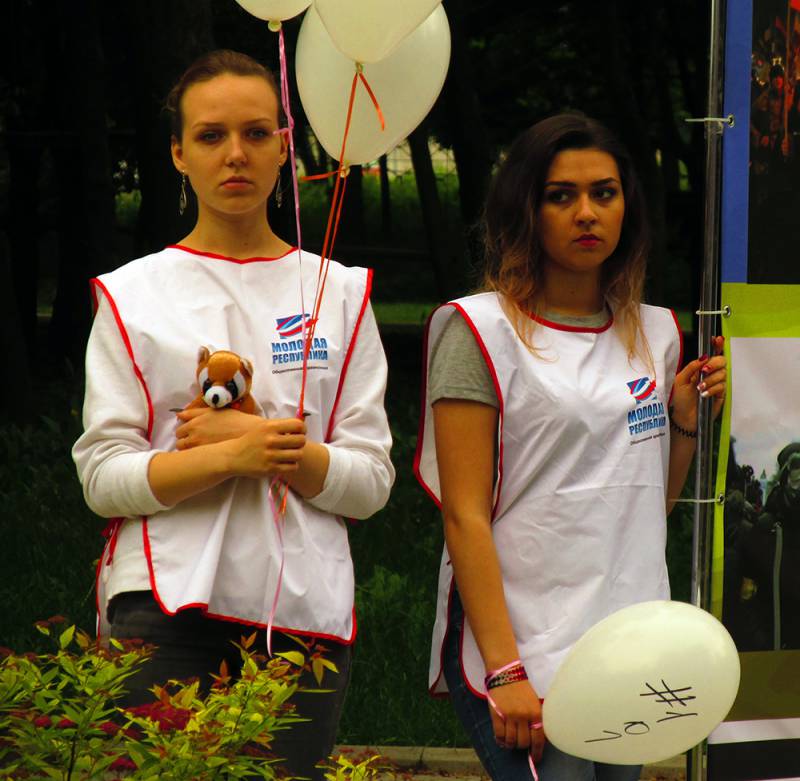 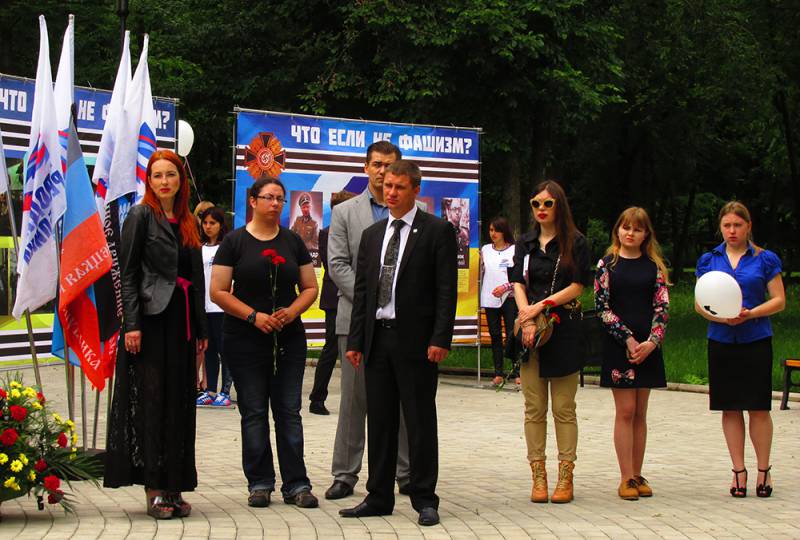 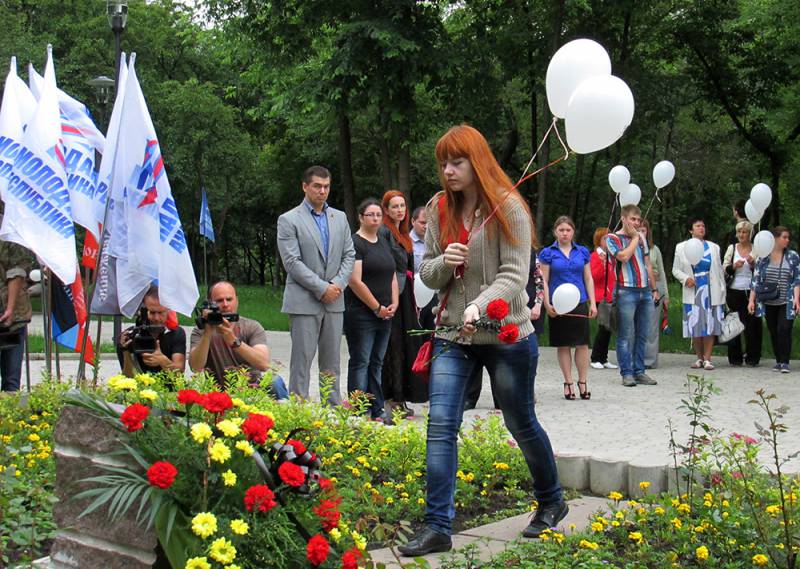 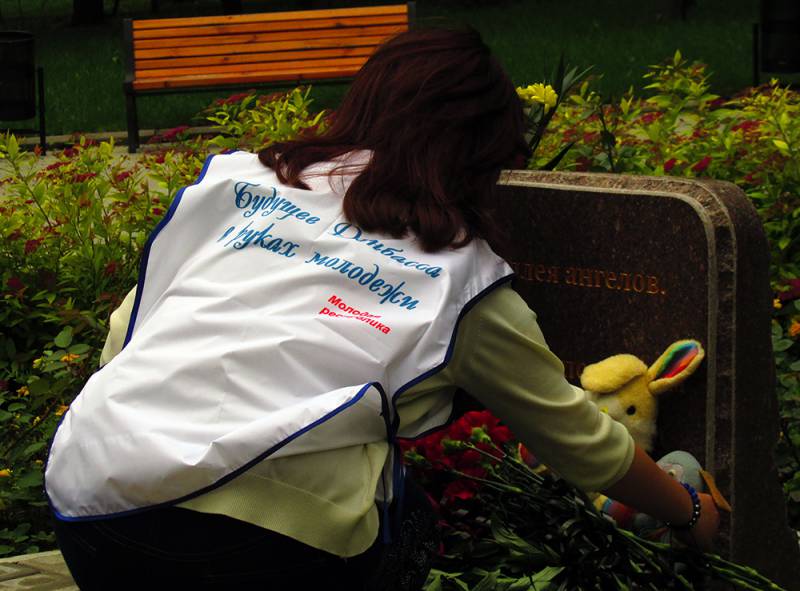 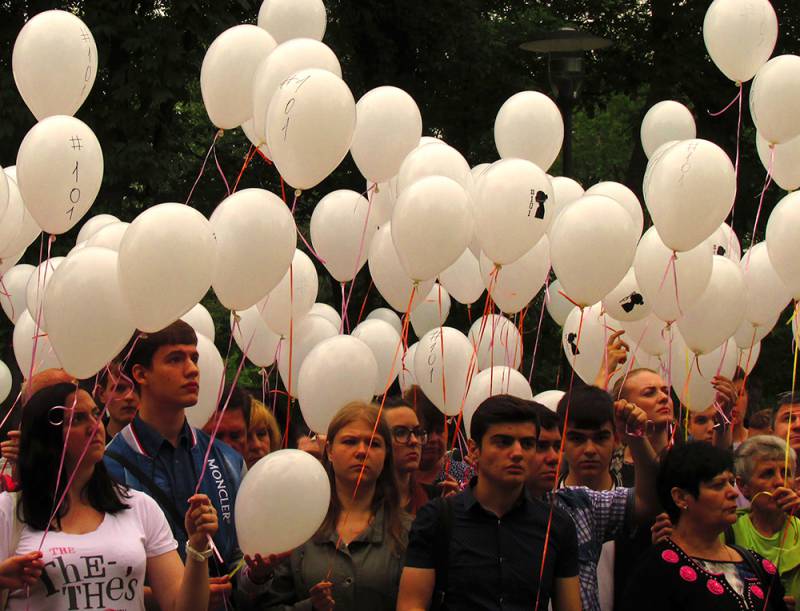 Among those who laid flowers to the memorial stone were the deputies of the People’s Council of the DPR, Sergey Kondrykinsky and Ekaterina Martyanova. 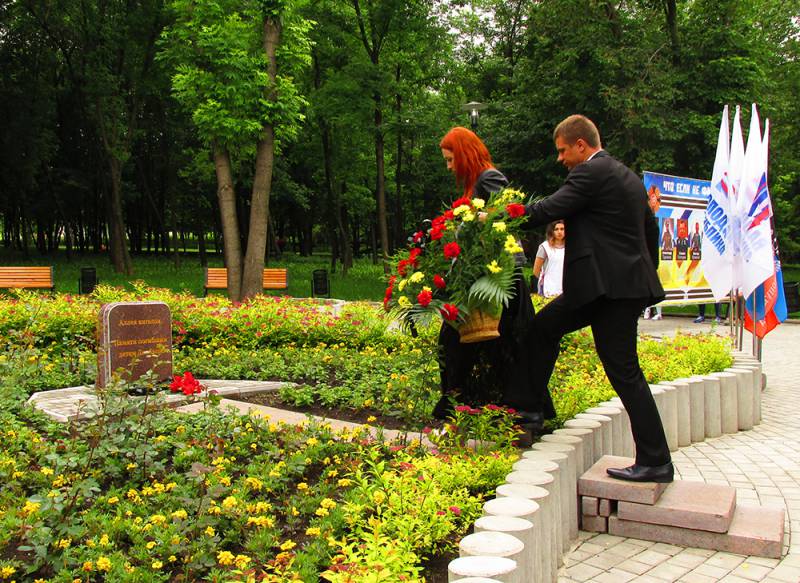 ... From Odessa, they say: this very drawing, which the artists inflicted on the wall of Donetsk airport - the silhouette of a girl and the number 101 - appeared in the city, which survived the new 2 in May 2014, the new Khatyn. Despite the fact that the city near the Black Sea, sung by Utesov, is today in a state of total political dictates by neo-Nazis, there are people who, at the risk of freedom, and even for life, put a mournful symbol of solidarity with the Donbas on the walls.

Ctrl Enter
Noticed oshЫbku Highlight text and press. Ctrl + Enter
We are
International Day of Peace. Letters of young residents of Donbass sent to the skyIn Donetsk, the OSCE missions painted their eyes, and in Lugansk they celebrated the 100 anniversary of the birth of Matusovsky
Military Reviewin Yandex News
Military Reviewin Google News
16 comments
Information
Dear reader, to leave comments on the publication, you must sign in.