5 2016 June
11
“There were so many prisoners that Hussar squadrons drowned among them.”


27 April 1915, the attack of the 3 of the cavalry corps, crushed the enemy's general army. The actions of the Russian cavalry in the First World War were at times of strategic importance, but remain a solid white spot.

By the beginning of the Zadnestrovsky battle, the 9 Army of General of Infantry P. A. Lechitsky had a significant number of cavalry units and formations. The 7,5 Infantry Division accounted for the 6,5 Cavalry Division. Almost half of the army consisted of mobile, mostly selected troops. This circumstance played a significant role in the unfolding battle. The 3 Cavalry Corps was to crush the Austrian front south of the Dniester, breaking through the fortified positions of the enemy. This went against both the theory and the practice of the First World War. The main gravity of the operation rested on the cavalry units.

The regiments of Count F. A. Keller, revealing a fortified enemy position, knocked the enemy out of a triple row of trenches with wire obstacles on the bank of the Dniester. The Russian cavalry broke through to the rear of the Austrians and captured the heights on the right bank of the Onut stream near the villages of Balamutovka, Rzhaventsy and Gromeshti. The most important task was assigned to parts of the 1-th Don Cossack Division. The 10 th Don Cossack regiment, breaking through a heavily fortified position (powerful trenches, wire barriers in the 12 – 15 series), captured about 600 prisoners of the lower ranks and six officers, four machine guns, four guns and six charging boxes. Reserve hundreds in a horse system, having passed the district dug in by trenches, began prosecution of the running enemy. Following the 1 th Don Keller immediately threw into the battle and 10-th cavalry division.

Fights proceeded with varying success. Russian cavalry had to endure the fierce onslaught of the Austrians. The commander of 10 of the Ingermanland Hussars, Colonel V.V. Cheslavsky described the enemy attack in memoirs: “At dawn on April 27, the enemy opened intensive gunfire of all calibres, which intensified by the 9 hours of the morning when he launched an offensive against the right flank of the occupied My regiment positions in the direction of the village Balamutivka. I took one squadron from my reserve ... During this time, the enemy’s chains managed to approach the 600’s steps towards our trenches and, coming under fire from a squadron and eight machine guns, began to suffer heavy losses, which made them lie down and pause. But his new thick chains continuously began to emerge from the forest. It was visible as the soldiers fell, as sheaves, neupayuschie went forward quite bravely and, having reached the front chain, poured into it. ”

The attack was repelled and the regiment, noticing the Austrian retreat had begun, rushed to pursue them in a horse formation. He attacked in the direction of the village of Yurkivtsi and the station of Okna, cutting off all enemy units between Balamutovka and the Dniester. Four hussar squadrons in the vanguard under the command of Lieutenant Colonel Barbovich were the first to enter the enemy infantry. As a result of this attack, more than a thousand prisoners were taken with the commander and brigade headquarters, several machine guns.

The regimental commander wrote: “We overtook entire enemy reserve columns, which were so frightened by the sight of cavalry that were rushing weapon and became crowded in heaps, raising their hands up. Many, for joy that they were not chopped and not stabbed with pikes, threw their helmets up and shouted "Goh." There are so many prisoners left in my rear, that the hussar squads sank positively among them. ”

Having broken through to the rear of the enemy during the swift operation, the divisions of the 3 Cavalry Corps attacked the enemy’s main position and its infantry, protected by several rows of wire obstacles, with a lot of dugouts and message moves. During the battle, selected infantry units of the enemy were overthrown and put to flight.

Crushed and cavalry of the enemy. Two Hungarian hussar regiments were crushed by the Cossacks and partly chopped up, partly taken prisoner. During the First World War, only the Magyars tried to withstand the dashing Cossack attacks, but, as shown история, even such inborn cavalrymen were in most cases bits. Four thousand prisoners, 3 guns and 10 machine guns of the enemy became the trophies of the 17 of the cavalry corps for the day of the battle.

A cavalry officer wrote: “What is the strength of the Russian cavalry and its Cossacks? Firstly, of course, in the wonderful military spirit of the Russian officer and soldier, in unshakable courage, dashingness and bravery of our cavalrymen and Cossacks, who in peacetime on races, felling, flanking and dzhigitovk so fascinated us our fellows. Secondly, in the magnificent upbringing and training of our cavalry, and thirdly, in a beautiful, powerful, unpretentious, equestrian composition, which runs well in the country. And we consider all these three qualities equivalent. ”

The attack at Balamutovka-Rzhaventsev is interesting for its scale: 90 squadrons and hundreds participated in it. Russian units depending on the situation acted as flexibly as possible. The Don Cossack regiments, on foot, breaking through the fortified position of the Austrians, developed this success with a horse attack, which completed the rout of the enemy. The command of the 3 Cavalry Corps used tactics such as massing attacks and building up efforts in the direction of the main attack. 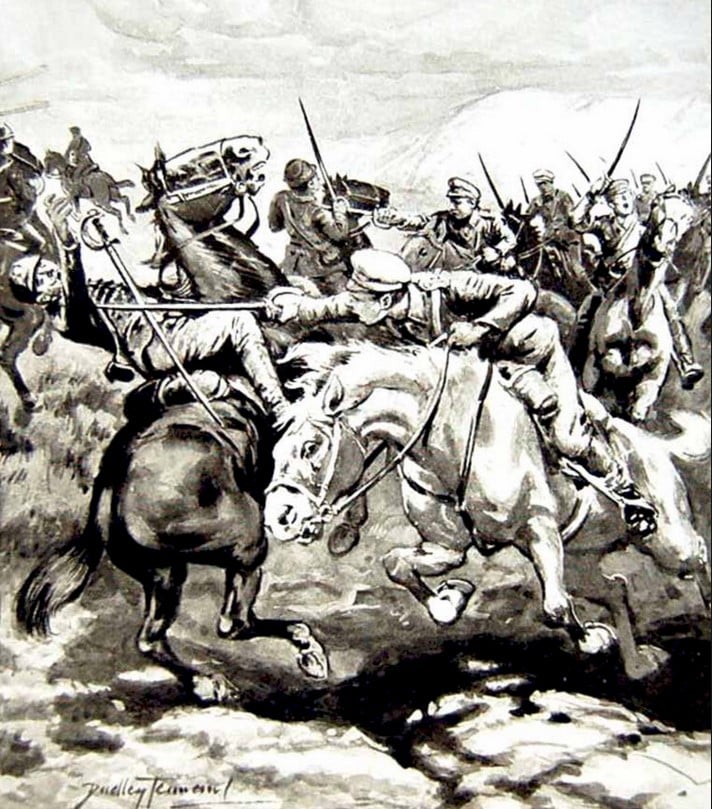 In the Zadnestrovsky battle, the Russian cavalry played a strategic role — in the battles of Balamutovka-Rzhaventsev and Gorodenka, the fate of the army operation was decided: the enemy general army was defeated. It must be emphasized that the Russian cavalry acted during the positional period of the war, when active operations were expressed in the form of a breakthrough of the enemy front. And it was possible to develop the advantage only by a quick strike by a strong cavalry group. It is precisely the strategic cavalry, acting by significant masses, that solves the corresponding tasks.

Already after the first combat clashes, the superiority of the Russian cavalry over the enemy was revealed, both as personnel and in combat training. It is not surprising that the Austrians (to a lesser extent) and the Germans (to a greater extent), as a rule, avoided mass horse fights and in most cases preferred fire or foot fighting. At the same time, the history of the First World War abounds in such attacks of the Russian cavalry, and on infantry, machine guns, artillery, and even the fortified positions of the enemy. Many of these attacks were tactical and operational, and some were of strategic importance.

Horse attack - a means of combat is very risky, only determined warlords and hardened fighters can carry it out. Horse fights are usually fleeting, they require high moral tension and excellent training of troops, while firefight is less risky, easier to manage, although more prolonged.

It is not surprising that the cavalry achieved success where there were good commanders. It was once said that her story is made up of the glory of superiors. And this postulate is not outdated - in the conditions of the war of the beginning of the 20th century, the cavalry commander had to possess exceptional personal talents and a certain military talent. Such, as is known, are born rarely. But precisely F. A. Keller represented that type of ideal cavalry commander who was in demand by the world war.

In the battles of Balamutivka-Rzhavenets, large settlements of Zalishchy and Nadvorn were taken, and the 7-I of the Austro-Hungarian army of General K. von Pflanzer-Baltin was driven back over Prut. The breakthrough of the enemy front and the rapid advance of the cavalry in two or three days affected the central sector of the front of the army. The enemy began to hastily leave fortified positions against the Russian 30 and 11 of the army corps and retreat to the south - beyond the Prut and into the mountains.

But the main thing - the course of this unprecedented attack in history has shown: even in the context of a positional war in a network of wire obstacles, when a machine gun dominates the battlefield, the role of cavalry is not lost. The cavalry attack is not only possible, but in the appropriate operational and tactical conditions and with proper leadership, it promises unprecedented success.

Even during the hardest spring-summer campaign of 9, the 3-I Russian army and its 1915-th equestrian corps did not actually have any defeats.