The flights were carried out from the Central airfield named after MV Frunze, better known as Khodinka. However, in the same 1936-m it was closed for a major reconstruction, during which it was necessary to build a concrete runway. While construction was in progress, civil flights were sent and received by Bykovo airport.

The airfield and navigation arrangement of the Moscow-Vladivostok airline was completed by 1932, but for a long time it was used mainly in the postal-cargo mode. After all, air passengers had to get to the “Vladik” for several days, with many transfers, which, with the exception of a small gain in time, did not give advantages over traveling by rail. And as far as such a flight was pleasant, anyone who had to fly An-2 can imagine.

Survey work on the Moscow-Vladivostok highway began in the late 20, when Dobrolet, the predecessor of Aeroflot, mastered more than 12 thousands of kilometers of regular overhead lines. The experience of long-distance passenger transportation was developed on the Moscow-Irkutsk highway with a length of 4500 kilometers, where, from May 1931, K. Kalinin K-4 airliner worked in postal quality in small quantities. He was replaced by a large-scale K-5 for eight passengers instead of four from its predecessor. K-5, in particular, was used on the route Irkutsk - Vladivostok. Three or two-engine Tupolev ANT-9 for nine passengers seemed more preferable for long-haul flights, but even he, who worked successfully for the Soviet-German airline Deruluft, did not meet the requirements for machines for transcontinental flights. For them, the board needed more and more comfortable. But what is interesting, the image of ANT-9 embellished all Soviet air tickets of those years.

The passenger plane specifically for the Moscow-Vladivostok line was taken by the team of A. N. Tupolev. Thus was born the five-engine giant (at that time) ANT-14 “Pravda”, during the creation of which the developments embodied in the heavy TB-3 bomber (ANT-6) were used: wing, landing gear and many other components of the 30’s Soviet “flying fortress” yo The ANT-14 was designed for 36 passengers and had an impressive flight mass at that time - 17,5 tons. But with a cruising speed of less than 200 kilometers per hour, the Pravda’s flight range was only about 1200 kilometers. To get to Vladivostok, it took several intermediate landings with the rest of the crew.

ANT-14 was tested in the air by M. M. Gromov in 1931, but, alas, it was not launched into the series, so he did not have to master the Moscow-Vladivostok route. The car was handed over to the squadron named after Maxim Gorky and not the poorest Soviet citizens were used for amusement walks over Moscow (flights were paid). He had to make only four long-haul flights: two to Kharkov, one each for Leningrad and Bucharest. However, the plane was very reliable. Over the 10 years of operation, he transported about 40 thousands of people without accidents and serious damage. 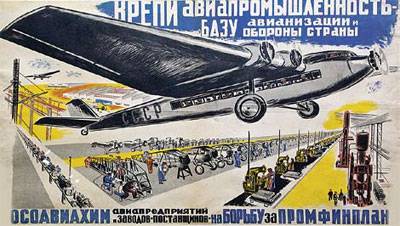 For servicing the Moscow-Vladivostok air route, it was probably necessary at least no less than a dozen such machines. Civil Air Command fleet hoped to get them even more - fifty pieces already in 1933, but it remained in the plans. Apparently, inconsistencies with the necessary retrofitting of the ANT-14 in order to turn it into a military aircraft, not only a transport one, but also a bomber, also prevented the introduction of the machine into the series. The possibility of such a “conversion” was a requirement of the military leadership.

However, ANT-14 did not promise any decisive advantages in comparison with the railway Trans-Siberian Railway. This flight would cost the passenger approximately 200 rubles, which corresponded to the average monthly salary in the USSR in 1936, and G-1 and G-2, that is, heavy bombers TB-1 and TB sent to demobilization, were quite suitable for freight traffic on long-haul routes. -3.

Subsequently, the Moscow-Vladivostok flights were carried out by the famous Lee-2 — the Douglas DC-1938 transport and passenger Douglases manufactured from 3 of the year. Regular passenger air traffic on the highway actually opened only in 1948 when new 27-local IL-12 began to operate, more comfortable for air travelers, but quite unpretentious, requiring airfields for takeoff and landing that "Cross-country" Lee-2. This was a milestone in the development of air links - the Il-12 spent a little more than a day on the road from Moscow to Khabarovsk, while the Transsiberian express train overcame the path in six days. Advertising flights on the IL-12 read: “The plane will take you five to six times faster than the train. Ticket prices are cheaper than sleeping cars of the 1 category of courier trains. In the cockpit of the aircraft there are comfortable soft armchairs, a wardrobe, a wash basin, for infants there are cradles with bedding. There is a buffet on board. ”

By 1955, the main trunk horse of Aeroflot has become a more advanced, but still piston IL-14 on the passenger 32. And in the second half of the 50-x "air Transsib" submitted to the first Soviet jet airliners Tu-104. In 1958, a test nonstop flight from Moscow to Vladivostok made a turboprop handsome Tu-114 - a civilian modification of a heavy strategic bomber Tu-95.

In 1958 – 1964, the capital of Primorye began to take on regular Tu-104, as well as turboprop Il-18 and An-10 (later Tu-154 and Il-62 came), and piston veterans, including Lee-2 labor workers, went to near highway. Chroniclers of the airport "Knevichi" precisely from this time counting his new history. I wish there were more Russian-made cars in the future. And the first in our country transcontinental airline Moscow - Vladivostok and today is one of the longest in the world.

Ctrl Enter
Noticed oshЫbku Highlight text and press. Ctrl + Enter
We are
The last battle of the destroyer "Frunze"The myth that Stalin is guilty of the death of the outstanding Soviet commander M. V. Frunze
Military Reviewin Yandex News
Military Reviewin Google News
3 comments
Information
Dear reader, to leave comments on the publication, you must sign in.