2 2016 June
36
30 May. Kiev. Session of the Inter-Parliamentary Assembly of the Verkhovna Rada of Ukraine, the Seimas of Lithuania and the Seimas and the Senate of Poland. If you say simply-skhodnyak Russophobes to talk. And to talk, of course, not about the problems that worry and worry the deputies in the participating countries. The topic should be shared. 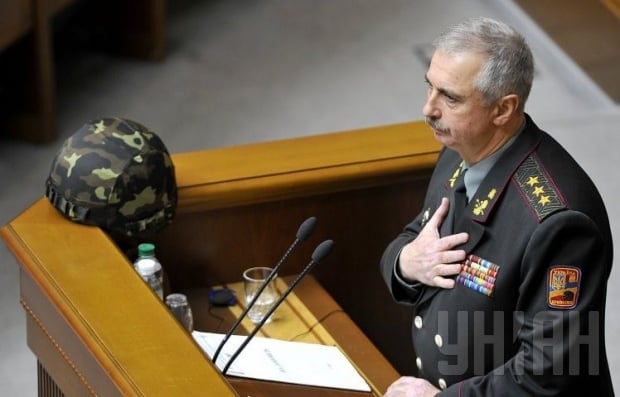 Apparently, the topic was searched for very long. There were a lot of questions, mainly on the topic "what to do with Russia." And one of the key moments was the speech of the Deputy Secretary of the National Security and Defense Council of Ukraine, Mikhail Koval.

Why Turchinov himself did not speak, but put in his place a three-star general, hard to say. Apparently, for the weight and to believe. A man in uniform (I do not want to offend the term "military"), apparently, is simply obliged to have more weight than an unshaven mug in a crumpled jacket.

"Russian troops are preparing for active offensive actions with a view to reaching the administrative borders of the Donetsk and Lugansk regions, as well as“ breaking through "the land corridor to the Crimea. And international sanctions against Russia remain an effective mechanism, but not sufficient to force Moscow to abandon its aggressive plans."

In principle, nothing new and interesting. Next came the numbers, with the help of which the pan general planned to convince the listeners of the reality of the Russian threat. And here is something.

And Skibitsky called other figures of the Russian armed forces located in the Crimea.

The storyteller, although the general, Koval, the right word. Although the figures voiced by the representative of the Ukrainian intelligence, it is enough to plow all the APU.

And Mr. Turchinov did not stay away. While Koval frightened the parliamentarians with figures, the head of the National Security and Defense Council of Ukraine at a meeting with the chairman of the Lithuanian parliament, Loreta Grauzhinene, was in full swing in the spirit of the times.

Turchinov began by saying that in the very near future full-scale hostilities could begin in the Donbas. And, of course, blamed Russia on this.

“Russia is not a third party, but an aggressor. It's theirs weapon used to fire in the east, it is their soldiers who kill the Ukrainians, it is they who have unleashed the war. ”

As they say, no comment, because the clinic is there. There would be "knit and prick", and listen to him.

"We see Russia daily firing at the Ukrainian positions, while practicing the use of new weapons and new methods of warfare, completely ignoring the basic positions of the Minsk agreements."

I will not even discuss the adequacy of Turchinov himself, everything is clear with this question. However, I ask the question: for the sake of what does he carry this nonsense? And everything is simple.

“We are actively developing the defense-industrial complex, but we cannot fully cover the need for the full range of weapons needed to protect Ukraine. The decision on military-technical assistance from the allies is needed not after the intensification of hostilities, but as a preventive measure. "

That's all. It's just like white day. But let's think about whom Turchinov is crucifying? Before the Balts and the Poles. That is, in front of those from whom he definitely will not receive any military assistance. And of the above allies, forgive, none.

Apparently, no one wants to listen to Turchinov and his followers in the West. The song about the fact that Ukraine is protecting Europe, the world, the solar system and the galaxy from the bloodthirsty hordes of Russians, is no longer interesting to anyone.

And alas, but the "fifth army" in the world (or Europe, I do not remember exactly) has slipped to the usual limit-begging in the company of its own kind. Unbelievable, but it is a fact.

A year ago, even in the sweetest dream, I could not have imagined that the Ukrainian military and security men would beg for something in the company of the Balts. And how it all began beautifully, remember? As Biden promised and weapons, and equipment, and the latest complexes ... And where is Biden now, and most importantly, where is what he promised?

Kiev has repeatedly made statements in the wake of the ongoing virtual war with Russia. As if there is aggression of Russia, as if war is going on. It is impossible to say where, however, it goes and by what forces Russia is present and fighting there.

One could not pay attention to this nonsense, if not for the real build-up of Kiev by the troops around the DPR and LPR. Kiev junta does not shrink anything, causing discussions about the possible development of events in the south-east of Ukraine. Yes, and storytellers themselves come up with a good idea, here you can not argue.

It is easy to understand that the Kiev authorities just need to constantly stir up hysteria around the artificially created "hot spots", the Crimea and the Donbass. “Scream, you will be heard” - the principle is very old, but, according to the Ukrainian authorities, it is still very effective.

However, if not very seriously, the scenario in the case of a real outbreak of hostilities may be somewhat different - the corridor is likely to be cut not to the Crimea, but to Poland.

And two more words about the Crimea. It is impossible to say that Russia militarizes the Crimea at an accelerated pace. There is nothing more than a database update in the current environment. But even if we accept that Russia is “militarizing” the Crimea, this is not happening because of Ukraine.

The situation today in the region forces us to be active. And in terms of the rotation of troops in the Crimea, and in terms of updating the technical base. And Russia will solve these issues as it sees fit. On its territory.

And Ukraine, first of all, should be concerned about the situation in the Donbas. And since the aggravation of tension occurs precisely because of the constant military pressure and provocations on the border with the LC and the DPR from the side of Ukraine, this is the military threat to Kiev. But it does not come from Moscow, Donetsk and Lugansk, but from Kiev.

But Russia will not fight with Ukraine. No matter how hard they tried to present it to the world community in Kiev. It is strange that the Ukrainian authorities do not predict such options. A realistic approach is the only thing that can, if not save, then at least delay the moment of the final collapse of the Kiev junta.

Ctrl Enter
Noticed oshЫbku Highlight text and press. Ctrl + Enter
We are
Results of the week. “I will ask you not to offend our bird”Results of the week. “Look, the whole face is black! Have you ever read Moidodyr? ”
Military Reviewin Yandex News
Military Reviewin Google News
36 comments
Information
Dear reader, to leave comments on the publication, you must sign in.