So that’s why she doesn’t shoot ... About NATO’s plans to increase the Black Sea flotilla

2 2016 June
122
The closer the gathering of NATO generals and politicians, the more reason to really think about our relations with the bloc. And, accordingly, about the attitude of the block towards us. Through the mouth of its representatives, NATO is increasingly threatening Russia. 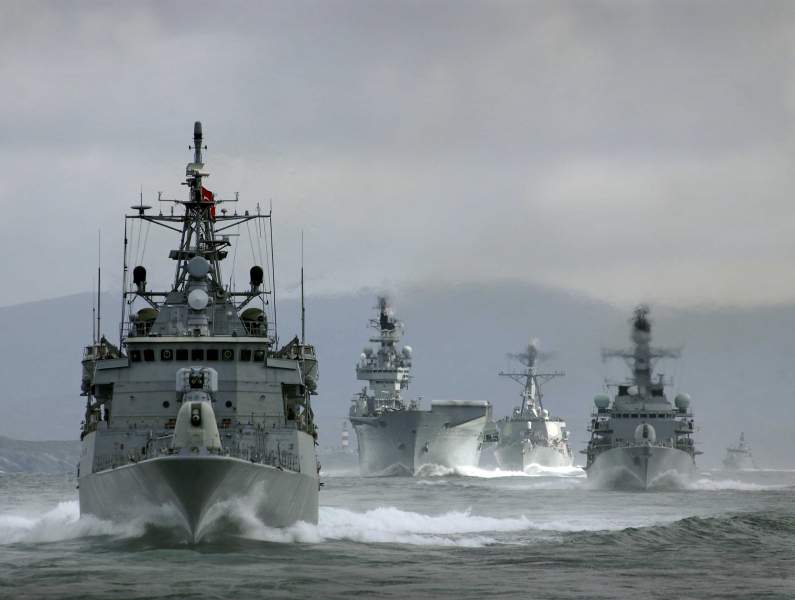 Just recently, the Turkish president voiced the idea of ​​the need to “stop” Russian forces in the Black Sea. The need to prevent the transformation of the Black Sea in the "Russian lake".

When the VKS operation began in Russia in Syria, we were shocked by the actions of Turkey in relation to our aircraft. It was clear that this was done on purpose. All the "arguments" of Erdogan were so ridiculous that even his allies tried to dissociate themselves from Turkey.

We do not know what Ankara wanted. We leave this incident to the conscience of the Turks. We will not now intervene in the dismantling of Russia and Turkey, despite the fact that the Turks are members of NATO.

Many experts then tried to explain why this happened. But no one gave a clear explanation. They chose to forget about the plane. Especially since the sanctions of Russia hit a competitor. And to some extent contributed to Erdogan's greater desire to talk about the problems of refugees in the EU.

The thought that I will express today is at first glance absurd. The plane was destroyed with the consent of NATO. It is with the consent. And perhaps on the direct instructions of NATO generals.

Alas, I cannot provide documentary evidence. Too serious a level for "a serious information leak from NATO headquarters to take place today." Therefore, I will proceed from the logic of further events.

A country member of the alliance shot down an aircraft of the armed forces of another country. NATO has repeatedly stated and proved this with the help of pictures and calculations about its capabilities in the field of space reconnaissance. But, as in the case of Boeing, at the time of the incident over this territory there was not a single one of almost half a thousand groups of American military satellites. And the European have disappeared somewhere ...

Following. Erdogan after the destruction of the aircraft quickly "rushed" to NATO. Save! Not to apologize to Moscow, but to Brussels. For protection. And, as subsequent events showed, he was right. We "built muscle" but beat Turkish aviation did not dare. And the sanctions that apply today, as I wrote above, play on the side of Europe in the competition for markets.

Farther. Turkey is beginning to quietly "surrender" its position in negotiations with the EU regarding refugees. Yes, they offered money to the Turks. Serious money, but not as much as the Turks lost from the break in relations with Russia. And an order of magnitude less than requested by Erdogan.

By the way, the expulsion of the premier's political "Olympus" also fits perfectly into the pattern of relations. It was through him that the main communication with the block took place. It means that it is he who is to blame for some, in the future, "unresolved issues."

And today - numerous statements about the "Russian lake". Statements from whom? From a country that has dominated the region since 1936. Together with the USSR, and now, with Russia. The country that controls the Black Sea straits.

We very often speak and write about the famous Montreux 1936 convention of the year. We speak as a guarantee of stability in the region. Is it so?

Of course, now someone will talk about the peaceful Black Sea in Soviet times. After all, during the USSR, NATO had no desire to deploy a fleet or flotilla then. Everyone was happy with everything. The convention was in force.

Well yes. Only supported by this action was the strength of the Black Sea Fleet of the USSR. Let me remind you that 120 combat ships were part of it at that time! In total, the fleet had more than 800 ships! The ratio of forces of the USSR - NATO was almost 5 to 1. Here it is, the real component of the Montreux Convention. And the guarantor of security on the Black Sea.

Can NATO "circumvent" this convention today? Easy! How many countries are in the alliance? You don’t even have to answer. And each can send "his" warship to the World Cup. Only one. But the group will be quite impressive.

Another way? Yes please. Who prevents to transfer several warships to Romania or Bulgaria? In order to help create your own fleet. Countries in the block. They have a right. Even Georgia can get several ships. As a candidate member.

According to experts in the field of the Navy, any grouping of ships in the Black Sea can be destroyed by means already located in the Crimea in a matter of minutes. Even without the help of the given forces and means. And the “immensity” of the Black Sea does not allow having a large number of serious ships there. Maximum of 12-15 frigates.

This is enough to deliver the first and last strike with the same Tomahawks. Further down the drain.

And now that we receive in the total. Launchers in Romania. Launchers in Poland. Placement of NATO battalions in the Baltic States 4-5. Flotilla in the Black Sea. Agreements on the use of territory in the Nordic countries. The development of military infrastructure in the countries bordering on us. The list can be continued.

I hope NATO will not fight with Russia. But we have already managed to draw us into the enormous costs of rebuilding the modern fleet. Trying to drag us into an arms race. And who is in charge of this process is also understandable.

I will repeat the idea that I have repeatedly expressed in my publications. We need today to understand the word "enough". Not to "tear the veins" of the last forces due to the deterioration of the life of the people, but to plan to build new ships, create new weapons, equip equipment with new missiles. But according to plan! And then all NATO attempts will be just PR.

In the meantime, in order to destroy the NATO flotilla in the Black Sea, today (assuming that it is already there), the Black Sea Fleet forces need only a few minutes. "Bastions" with "Onyx" perfectly cope with this. And with 100% guarantee. 300 km almost complete control. But there are still "experts on the cookies" on the Su-24, there are "Varshavyanka" with cruise missiles.

"There is much in the world, Horatio, that our sages have not dreamed of ..."

Ctrl Enter
Noticed oshЫbku Highlight text and press. Ctrl + Enter
We are
ARMY-2016. Cluster VCS. Part of 2. Space is space!Results of the week "I do not need a Turkish coast"
Military Reviewin Yandex News
Military Reviewin Google News
122 comments
Information
Dear reader, to leave comments on the publication, you must sign in.