They do not want to "restrain" Russia

2 2016 June
63
NATO fails to find in Europe a large number of allies, "concerned" with the eastern frontiers. The states of Western Europe consider the real danger of not the Russians, but the hordes of the “Islamic State”. In Denmark, they directly stated that the country cannot play an active role in the formation of battalions for Poland and the Baltic republics: there is no money, they say. It is obvious that the previous tensions between the US and its European allies remained, despite the propaganda of the “Russian threat”. 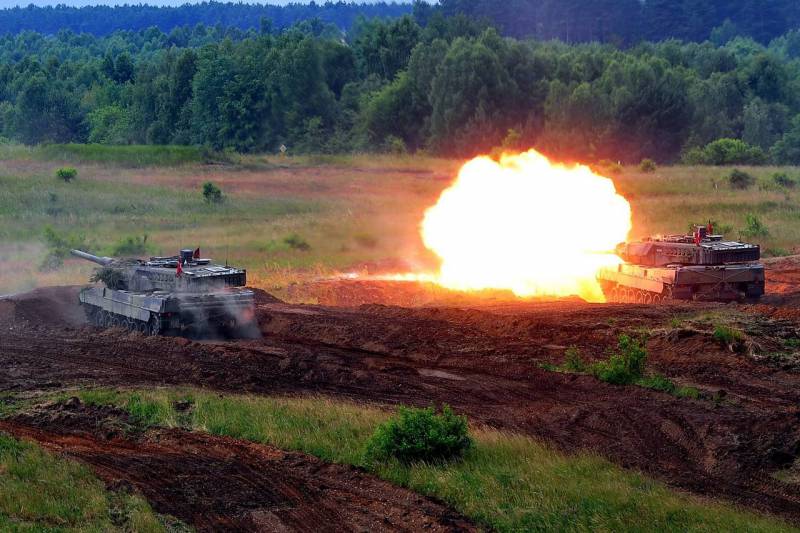 A NATO summit will be held in Warsaw in July. The meeting will determine the course of the alliance to create a so-called security environment. This was recently told in Tallinn by NATO Deputy Secretary General Alexander Vershbow. Recall his words.

According to him, NATO today is facing a number of dangers: in the east it is an aggressive Russia, in the south there is instability caused by refugee flows.

Mr Vershbow noted that in the Baltic countries and Poland, units of up to battalion each will be deployed: "The point is that a force consisting of all units of the allies can respond to any invasion." In addition, in July, it is necessary to approve a “long-term strategy towards Russia, and this will be preceded by a broad analysis of Russia's foreign policy and its security policy, which will promote greater unity of views of the alliance member countries on this issue.” According to the NATO Deputy Secretary General, the Allies are increasingly aware that they are dealing with a revanchist Russia that adheres to "irresponsible" rhetoric "about tactical nuclear weapons».

A joint operational group of increased combat readiness consisting of five thousand soldiers was created by the decision of the NATO summit in 2014.

One of these days in "The Wall Street Journal" Julian Barnes article was published on the topic of the European "allies" of the USA in NATO.

The article states that after Washington decided to send not one battalion to Eastern Europe, but two, the North Atlantic alliance seemed confused: there are almost no states in Europe ready to “voluntarily hold back” Russia by fulfilling mutual treaty obligations to protect.

Europe does not want to dance to the tune of the Americans. The fact is, the journalist notes that not all NATO members in Europe share the “concern” of Washington with the notorious “eastern frontiers”. If the countries of Eastern Europe find the strengthening of the borders necessary, then the states of Western Europe are not worried about the “Russian threat”, but about the militants of the “Islamic State”.

Denmark directly told the Americans that all these battalions for Poland and the Baltic countries require a lot of money, while Denmark lacks them.

Norway itself wants to ensure its security, since it borders with Russia.

White House does not like this behavior. President Obama called the European states "free riders".

Washington has one hope. Americans are negotiating an increase in ... Canadian troops in Poland. There are already two hundred and twenty Canadians there, but now we are talking about a thousand. However, Ottawa has so far not responded to anything concrete to these American plans.

Chairman of the State Duma Committee on International Affairs, Alexei Pushkov, recently listed a number of NATO countries that are betting on a military standoff with the Russian Federation.

"In NATO, there is a group of states that relies on a military confrontation with Russia," he said in an interview "Russian newspaper". - These are the Baltic countries, Romania, Poland, the UK and the USA. We need to take this as a signal that there can be no talk of restoring relations with NATO in the foreseeable future. At least, until NATO refuses its new strategy of forward basing and intimidation of Russia, until it returns to the Founding Act, signed in 1997, until it explains to the “young Europeans” rushing into battle that they will not be allowed to drag the Western alliance into a potential military conflict with Moscow. "

“Recently, we have seen the real price of empty talk that NATO is a“ peace-loving alliance ”, which deals exclusively with“ expanding the zone of democracy ”. It is difficult to understand how the "expansion of the zone of democracy" can be facilitated by the creation of NATO bases in Poland or by strengthening the military presence of the alliance in the Baltic States, which the Secretary General of the Alliance Jens Stoltenberg constantly talks about. Or how the American reconnaissance aircraft, which only in May have already flown five times over our borders, have been expanding the “zone of democracy”. Rather, it can be considered as preparation for military actions, ”added Pushkov.

Known statement and another expert.

During the recent video link in MIA "Russia Today" Russia's permanent representative at the alliance, Alexander Grushko, said: “Another topic that has received a resonant response is NATO's attempts to strengthen interaction with the EU. Corresponding meetings were held here, and it was agreed to continue in the zone of so-called common interests to look for mechanisms of conjugation and more efficient use of potential. What cannot but worry us is that NATO is trying to introduce cooperation in hybrid operations in the EU, and here the anti-Russian focus is evident. ”

“European states also differ with respect to the Russian Federation,” cites the opinion of Vladimir Yevseyev, head of the department of Eurasian integration and development of the SCO Institute of the CIS countries, Utro.ru. - There are Baltic states that are extremely anti-Russian. There is Poland, which pursues an anti-Russian foreign policy. There is Romania, which in many ways is a conductor of American influence. Therefore, if we talk about Poland, Romania or the Baltic countries, here the United States has full support. Another question is that other states - Hungary, the Czech Republic - have their own point of view. ”

As a result, the United States is trying to use other states to fulfill its interests, the military expert believes. These are the states that "fear Russia". Such a US game "is not always possible." The US recently tried to shift its functions in the Middle East to Turkey, but what came of it?

The United States generally needs to go to the Asia-Pacific region, because there is China. Therefore, Europe’s security functions should be decided by Europe. The United States wants Europe to hold back the Russian Federation, but here the Allies have a number of questions: 1) why does Europe need it; 2) who will pay for it? And especially such questions are often asked by those countries that are never opposed to Russia - for example, Italy or Spain.

Yes, let us add on our own, it is unlikely the Italians, with the Spaniards, who were hard hit by the American game “in sanctions”, are ready to “restrain” Russia even more. Another thing - the ruling elite of the Baltic states, as well as Poland. But, since they are so eager to restrain Russians, let them restrain themselves for this and pay out of their own pockets.

Do not overdo it?