Project "ZZ". Who will put someone on his knees

1 2016 June
80
Turkish President Erdogan wanted to improve relations with Russia. Frank-Walter Steinmeier, the German Foreign Minister, suggested thinking about lifting the sanctions on Russia, since no one is interested in destroying the Russian economy. In the Los Angeles Times, they wrote about the need to guarantee the non-expansion of NATO to the Russians, and the Finns lost the information war to the Russians and understood: it’s better not to go.


31 May Recep Tayyip Erdogan said he wants to improve relations with Russia. His words leads "Lenta.ru," with reference to the agency Reuters.

It seems that the Turkish ruler showed some kind of incomprehensibility, because he stated that he did not understand what steps Moscow expected of him. And he said that both countries should work on improving relations.

Further, “neosultan” again referred to his own incompetence, noting that “he does not understand how relations between states were sacrificed because of the“ error ”committed by the pilot.

A little earlier, German Foreign Minister Frank-Walter Steinmeier told about the desire to defuse tensions with Russia. He was far more intelligent than Erdogan.

Apparently, the minister is eager to change the course of Germany towards Russia, since it is not the first time that he speaks in favor of easing sanctions and for dialogue with the Russians. Steinmeier even announced the start of a new phase of cooperation between Germany and the Russian Federation.

Speaking at the German-Russian forum, he noted that sanctions were “not an end in themselves” at all, and Russia's counter-sanctions should not become a means used in order “to put the partner on his knees”.

According to him, “no one is interested in the complete destruction of the Russian economy,” since such destruction certainly will not be a “contribution to strengthening European security.”

However, Steinmeier rejects sanctions very cunning. He believes that they should be applied "intelligently." The politician does not allow the recognition of the "annexation" of the Crimea. And nevertheless, “consistent progress” in the implementation of the Minsk Agreements should be the basis for “phased cancellation of sanctions instruments”.

Steinmeier also spoke out against a “return to NATO philosophy,” which is still being built solely on “enhancing the ability to conduct military operations.”

In addition to Steinmeier, Katharina Barley (General Secretary of the SPD) spoke out for loosening the sanctions, and on behalf of the party: she emphasized that the Social Democrats would like to speak.

Joshua Itskovich-Shifrinson, renowned publicist at Dartmouth College, Assistant Professor at the Bush School of Government (Texas A & M University), in a new article for "Los Angeles Times" spoke about the need to guarantee the Russian non-expansion of NATO.

But the leaders in Moscow are talking about something else. For them, Russia is the injured party. They argue that the United States is not in a position to keep its promise about NATO’s non-expansion, made in the 1990 year of the negotiations between the West and the Soviet Union on the unification of Germany.

The West simply denies such an agreement. Nevertheless, the publicist points out, hundreds of notes, minutes of meetings and printouts from the archives of the United States point to it. Putin is “not holy,” but Russia's accusations of aggressiveness are “not quite fair.” Stability in Europe also depends on the West’s readiness to reassure Russia on the issue of the borders of NATO states.

No wonder that Russia was angry. Since the middle of the 1990s, Poland, Hungary, the Czech Republic, the Baltic countries and others have gained membership in NATO. Boris Yeltsin, Dmitry Medvedev and Gorbachev himself protested through both state and private channels, claiming that the US leaders had violated the non-expansion agreement. Later, the alliance reached further east, began to look towards Ukraine and Georgia.

Therefore, Russia's objections deserve attention. US policy has contributed to the tension in Europe.

Soon the heads of western states will gather in Warsaw for the NATO summit. The discussions will undoubtedly focus on efforts to curb “Russian adventurism” - including another increase in the presence of NATO troops in Eastern Europe and deepening NATO’s ties with Ukraine and Georgia. Such steps will “only strengthen” the Russian opinion about the “duplicity of the United States,” the author believes.

And concludes: just as the promise not to expand NATO in 1990 helped put an end to the Cold War, even today the guarantees of non-expansion of the alliance could help reanimate relations between the US and Russia.

The Russians did not just get angry, as comrade noted. Itskovich Shifrinson, but very angry. The other day, some Finns felt their angry. You could even say that these Finns lost the Russian information war.

On the Finnish theme writes Andrew Higgins in "The New York Times".

Finnish journalist Jessikka Aro, a journalist in Finland, working for the Yle Kioski television and radio company, has had to deal with the Russian info convoys.

She asked the audience to talk about their personal impressions of the activities of the so-called "army of trolls" from Russia. (The journalist Higgins immediately called them "vicious and poisonous" forces leading the network "agitation.")

Of course, Ms. Aro received feedback. But not only from the audience and listeners from Finland, who came across the network with the actions of the "aggressive" spokesmen of the "pro-Russian position", but also from those "poisonous" ones.

According to the publication, against the Jessica began the "evil campaign of retaliation." Higgins is sure that the very experts on defending the "pro-Russian position" led her. These people seemed not to be too shy, verbally attacking and falling asleep to her, and at the same time her television and radio company, with “insults”.

The actions of the “pro-Russian heralds” are so “destructive,” a journalist assures the American public that “NATO and the European Union have even created task forces to combat them.”

In the 2015 year, recalls the newspaper, Mrs. Aro was in St. Petersburg. The purpose of the trip was to investigate the activities of the "factory trolls." Pro-Russian activists in response staged a protest at the office of the company “Yle”, and Aro herself was bombarded with “offensive e-mails”. At the same time, they poured mud on social networks and even accused of drug trafficking. She dedicated a special video on "YouTube". The journalist appeared before the audience in the form of a deranged painted girl. 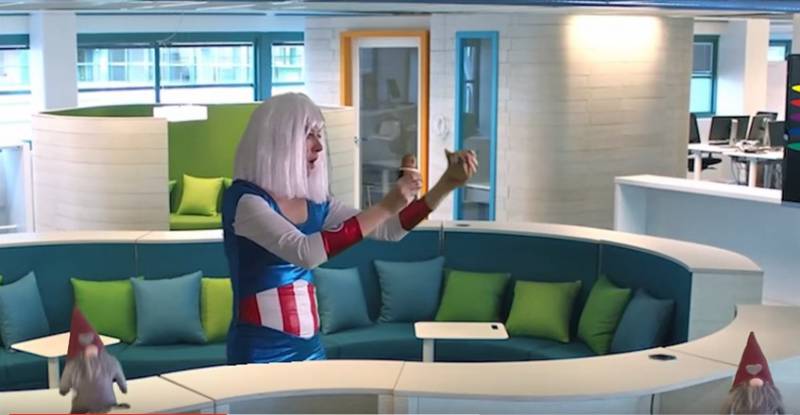 The article further states that Finland is on the front of the information war. Russians don't want Finland to join NATO. Hence the infoveyna.

A US journalist reports that many insults to Aro came from anonymous authors. Nevertheless, one of her critics did not hide his name. This is Johan Beckman from Finland, a supporter of Putin. He denies the fact that information attacks on Aro were part of the “information war”. On the contrary, the West is waging a campaign against the Russians full of misinformation. And Aro herself participated in this campaign, she made attempts to limit the freedom of speech to those people in Finland who are supporters of Russia. According to Comrade. Beckman, she and they declared "Russian trolls."

Earlier, the same Beckman declared that Mrs. Aro was an “helper of the United States and Baltic special services”. Higgins writes that at about that time they began to call her a "NATO slut."

Such achievements of Mrs. Aro can hardly be called a victory in the information war. With all due respect to her, we note that the search for truth brought her too far. Of course, today readers of the Military Review will speak about its activities. And they certainly are neither paid agents of the Kremlin nor the notorious “Russian trolls”. They write their reviews for free.

Jessica Aro (and along with her and Recep Tayyip Erdogan) it would be worth learning the wits from Herr Steinmeier. To strengthen friendship between nations, he does much more than the first two. Perhaps, he will even become the person thanks to whom the sanction anti-Russian noose will weaken.

Ctrl Enter
Noticed oshЫbku Highlight text and press. Ctrl + Enter
We are
Results of the week "I do not need a Turkish coast"Los Angeles Times: Pentagon rate in 10 billions lost
Military Reviewin Yandex News
Military Reviewin Google News
80 comments
Information
Dear reader, to leave comments on the publication, you must sign in.