From the Arctic Ocean Flotilla to the Northern Fleet

1 2016 June
18
June 1, Russia celebrates Northern Day fleet - the "youngest" of all the military fleets of the Russian state. His official история started 83 years ago. On June 1, 1933, the Northern Fleet was formed, four years later, in 1937, transformed into the Northern Navy. Today, the main task of the Northern Fleet is to maintain marine strategic nuclear forces in constant readiness in the interests of nuclear deterrence. Therefore, the main part of the fleet is made up of nuclear missile and torpedo submarines, missile-carrying and anti-submarine aviation, missile, aircraft carriers and anti-submarine ships. In addition, the fleet is entrusted with the task of protecting shipping, economically important areas, and fulfilling important foreign policy assignments of the Russian leadership in the waters of the oceans.


The Northern Fleet is the youngest in Russia. But in fact, the history of shipping in the northern seas of our country began much earlier than the Northern Navy Flotilla was created in 1933. Even in pre-Petrine times, the coast-dwellers of Pomors went there on their ships - brave Russian sailors. Peter I laid the foundation for organized shipbuilding in the northern seas. But until the beginning of the twentieth century, a separate compound of the Russian Navy in the Arctic Ocean was absent. And this is despite the fact that since the end of the 19th century, polar expeditions were repeatedly put forward, commanded by Russian naval sailors - Georgy Sedov, Alexander Kolchak and some others.

Under the conditions of the First World War, the need to create a separate naval compound in the northern seas surrounding the Russian Empire became apparent. Especially since this required urgent tasks of the defense of the Russian frontiers and the protection of Russian navigation in the northern seas. By the time of the outbreak of the First World War in the northern seas, only one Russian military ship served in the fisheries protection service - the Bakan messenger ship. In fact, the water area of ​​the northern seas was defenseless against the actions of the German navy. Already in 1915, the explosions of merchant ships sailing in the White Sea became regular. I had to turn to Great Britain to organize joint trawling and defense of the coast of the White Sea. But the British, since their problems of the North Sea defense were not directly related, they practically did not help Russia.

By the beginning of the First World War, there was, in addition to hydrographic vessels, only one Russian military vessel (the “Bakan” messenger vessel), which served to protect the fisheries. The appearance of German mines in 1915 in the White Sea, on which merchant ships were undermined, forced the Marine Ministry to start organizing the “White Sea Trawling Party”. The help from England, to which Russia has repeatedly appealed, was sporadic and extremely weak. In the end, the Russian leadership came to the conclusion that it was necessary to organize trawling and the protection of navigation in the White Sea on its own. However, this task seemed difficult to achieve.

At that time, the main Russian naval forces were concentrated on the Baltic and Black Seas. It was almost impossible to transfer the ships of the Baltic and Black Sea fleets to the Arctic Ocean. The only way to organize the formation of a separate flotilla on the Arctic Ocean was the relocation of part of the ships of the Siberian Flotilla, based in Vladivostok. But the Siberian Flotilla itself was sparse and could not provide a strong help to the forming flotilla of the Arctic Ocean. I had to turn to foreign countries with a proposal to purchase ships for manning the flotilla. It was possible to come to an agreement with the Japanese - the former battleships Poltava and Peresvet and the cruiser Varyag were purchased from Japan. In 1904, during the Russo-Japanese War, these ships were scuttled, but the Japanese raised and repaired them. In addition to the three former "Japanese" Russian ships, it was decided to transfer several ships of the Siberian Flotilla to the Arctic Ocean. In February, 1916. The Maritime Ministry of the Russian Empire made a formal decision to form the Arctic Ocean Flotilla. 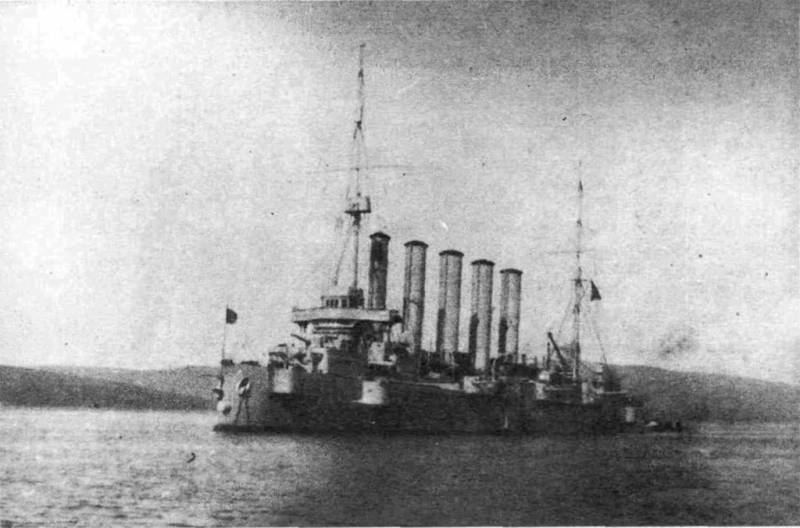 However, the relocation of ships from Vladivostok to Murmansk did not work out free from excesses. The cruiser "Peresvet" sank in the Port Said area, having blown up on a mine. As a result, it was decided to transfer the battleship "Chesma" to which the battleship Poltava was renamed (before the death of Peresvet, it was assumed that Chesma would be replaced by the cruiser Askold in the Mediterranean, which would go to the North). Besides him, the cruisers “Askold” and “Varyag” arrived to the North. The cities of Yokanga and Murmansk were chosen as the bases for the flotilla, and the ships for the needs of the new connection were transferred from Vladivostok. There was no money from the tsarist government for the purchase of new warships abroad, so Russia was forced to purchase outdated trawlers, whaling ships, steamboats and yachts and hastily convert them into military ships. In particular, for the needs of the northern flotilla, we bought 6 Norwegian and British, 5 Spanish trawlers, 3 American trawlers, 1 French and 2 Norwegian whaling ships, 14 yachts and steamboats, which were converted into messengers ships. However, it was possible to order the construction abroad and the new military courts. For example, in the UK, 12 minesweepers were built, and from Italy in September 1917 of the year a submarine built on a special order arrived in Arkhangelsk, which was given the name Saint George.

However, the October Revolution and the subsequent withdrawal of Soviet Russia from World War I led to a new stage in the short history of the Arctic Ocean Flotilla. Already 26 February 1918 of the Naval Department of the Central Committee of the Arctic Ocean Flotilla decided to reduce it. According to this decree, the flotilla was to include 1) trawling division consisting of 16 minesweepers, 2) messenger vessels to protect the fisheries of the northern seas - 5 vessels (Gorislava, Yaroslavna, Kupava, Taimyr and Vaygach "); 3) Transport workshop "Xenia"; 4) flotilla communications service comprising 2 minesweepers and 2 messenger ships; 5) Directorate of lighthouses and stations as part of 5 ships; 6) White Sea hydrographic expedition as part of 2 hydrographic vessels and 3 minesweepers; 7) sea icebreakers Svyatogor and Mikula Selyaninovich; 8) Murmansk survey, which included the Pakhtusov hydrographic vessel; 9) two squadron destroyers; 10) St. George submarine (later it was to be relocated to the Baltic Sea). All other vessels and institutions of the flotilla were ordered to reduce or liquidate. However, 24 in May 1918 was followed by a new order, according to which the number of ships in the flotilla was further reduced. In particular, the trawling division was reorganized into the detachment of 12 minesweepers, it was decided to remove all minesweepers from the hydrographic expedition, to transfer the submarine to the port for long-term storage. Obviously, the Soviet naval command was convinced that the young state would no longer need a large naval flotilla in the Arctic Ocean. But, as it turned out very soon, the reduction of the flotilla was a major mistake. The Civil War began, accompanied by the intervention of foreign troops. English and French airborne forces landed in Murmansk, the Finns launched an offensive.

It is worth emphasizing that the White Finnish offensive took place in March of 1918, just before the decision was made to further reduce the flotilla. By the way, the decision to reduce the flotilla was actively pursued by a certain A.M. Yuriev - Deputy Chairman of the Murmansk Regional Council of People's Deputies. At first, Yuryev and his supporters carried out at an accelerated pace the demobilization of the most active part of the sailors of the flotilla, and then on 30 on June 1918 officially announced a break with the Soviet authorities and signed an agreement with representatives of England, the USA and France on “joint actions”. This treaty unleashed the British, American and French hands for further intervention in the northern ports of Russia. The ships of the Arctic Ocean Flotilla were in the hands of the whites and interventionists, therefore in the northern regions of Russia mainly ground battles took place between the Red Army detachments on the one hand, the interventionists and the white ones on the other. The “white” government of the Northern region, under the leadership of Tchaikovsky, passed a number of the most interesting ships of the flotilla to the British and the French, formally justifying this decision by following the allied agreements, while Great Britain was at war with Germany. In fact, it was a real robbery of the flotilla on the most combat-ready ships that were taken to England and France. As a result of the actions of the Tchaikovsky government, the fleet composition by February 1919 declined very strongly and included only 12 messengers and hydrographic vessels, 4 torpedo boats, 9 minesweepers and the battleship Chesma. 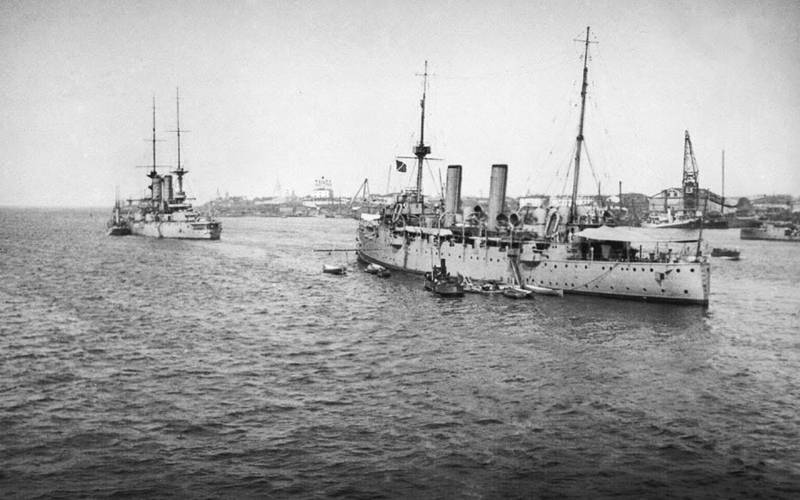 When by February 1920 the large-scale offensive of the Red Army units against Arkhangelsk began, whites began an accelerated evacuation. General Miller, in particular, was evacuated on the icebreaker "Kozma Minin", which the red icebreaker "Canada" did not manage to overtake. On February 20, units of the Red Army liberated Arkhangelsk, and on February 22, as a result of an uprising of sailors and soldiers, Murmansk passed into the hands of the Bolsheviks. Spring 1920 g. North of Russia met already under Soviet rule. The leadership of Soviet Russia had to think hard about how to restore the naval forces in the Arctic Ocean - after all, a significant part of the ships of the flotilla was led away by interventionists in foreign ports. In the end, it was decided to create the White Sea navy, which was later transformed into the North Sea Naval Forces.

According to orders from 26 June 1920, the Marine Forces of the North Sea included a naval squadron, a river flotilla, hydrographic expeditions of the White Sea and the Arctic Ocean, lighthouses directors and White Sea stations, coastal defense ships of the Murmansk region, and a diving rescue party. The Chesma battleship, the 3 auxiliary cruisers, the 3 cruiser, the 2 destroyer, the Kommunar submarine (the so-called Saint George boat), the 8 patrol boats, the 2 boats, the 2 cruiser, and the 1 cruiser, and the 7 trailer included the battleship of St. George; yacht. The coastal defense of the Murmansk region consisted of 4 patrol boats, 2 minesweeper, 1922 steamer. A number of vessels were transferred to hydrographic expeditions and the Directorate of lighthouses and the White Sea terminal. After the end of the Civil War, it was decided to write off all obsolete and more unfit for the service of the court. Hydrographic vessels remained in the naval forces, icebreakers handed over to the trading ports of the White Sea. In December XNUMX, the North Sea naval forces were disbanded. 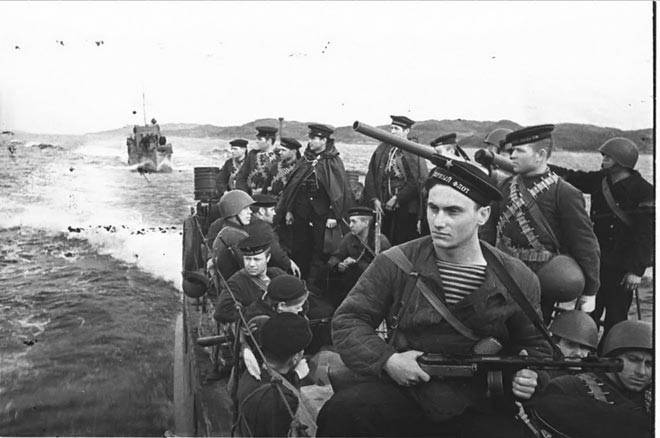 However, already after 11 years after the disbanding of the North Sea Naval Forces, the Soviet leadership again turned to the idea of ​​rebuilding a military flotilla in the northern seas - to protect the northern maritime borders of the Soviet Union. As a result, 1 June 1933, in accordance with a special circular, was formed the Northern Military Flotilla. For its staffing 3 squadron destroyers, 3 patrol ships and 3 submarines were transferred to the Kola Bay from the Baltic Sea. The main naval base of the fleet initially became Murmansk, and from 1935 the city became Polar. In 1936, the Northern Flotilla also received its own naval aviation - a separate link of the MBR-2 aircraft was redeployed to the North. 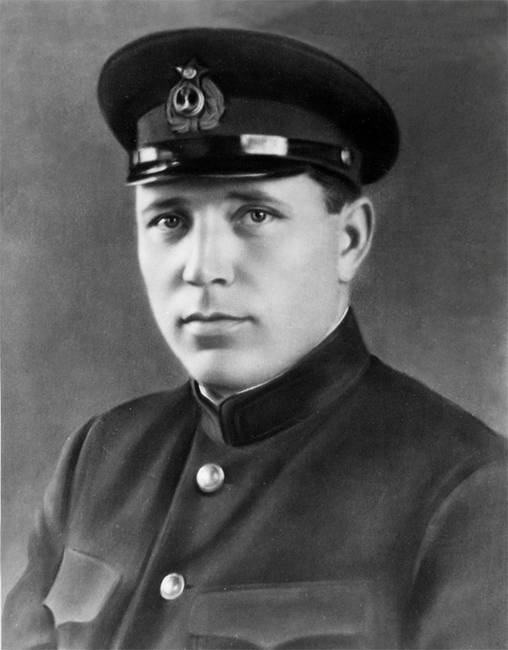 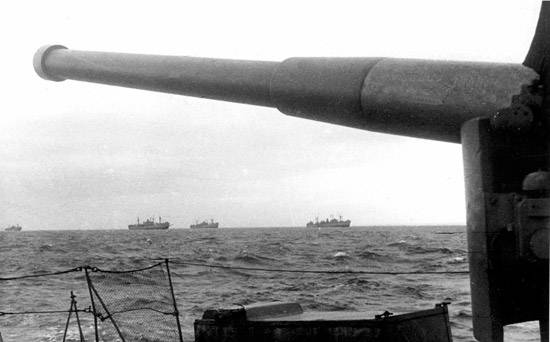 Thanks to the actions of the Northern Fleet forces, more than 200 ships and enemy ships, more than 400 transport ships, around 1300 airplanes, were able to ensure the passage of 76 allied convoys with 1463 transports and 1152 escort ships. Thousands of North Sea sailors fought heroically on land, eliminating many enemy soldiers and officers. But the fleet personnel suffered considerable combat losses - over 10 thousands of officers, officers, sailors fell in battles with the Nazi occupiers and their allies. Currently, the Northern Fleet is one of the most powerful and dynamically developing military fleets of the Russian Navy.