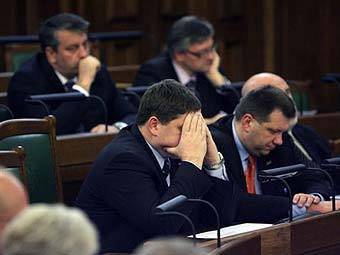 On Thursday, during the next plenary session of the Latvian Seim, the draft amendments were rejected for consideration by the commission. This project involved giving the Russian language the status of a second state. Thus, this issue will be submitted to a referendum.


60 Seimas deputies opposed the project being submitted to the commission for consideration. One of the deputies of VL-TB / DNNL - Karlis Kreslinsh - abstained. It was noted that the representatives of the “Consent Center” faction pointedly left the meeting room shortly before the voting began.

According to the Latvian Satversme (Constitution), the draft amendments are submitted for voting at a referendum. A nationwide vote on this issue is likely to take place within one, maximum two months after the decision made by parliament. The preliminary date is called February 18.

The question of introducing a second state language in Latvia was raised at the suggestion of the Native Language society, among whose leaders were Alexander Gaponenko, Vladimir Linderman and Yevgeny Osipov. In order to get a basis for a survey of the population of Latvia, they managed in record time to get more than 12 thousands of signatures of citizens. The second stage of the campaign, which took place from 1 to 30 in November, allowed 180 to receive thousands of signatures from Latvian citizens in support of the bill. In total, the initiative was supported by 12.14% of the country's population that participated in the previous parliamentary elections.

Already announced the amount that will have to spend from the budget for the referendum. According to preliminary estimates, it can reach 1.7 million LVL.

Representatives of the top leadership of Latvia did not support the proposal of the “mother tongue”. The referendum was called an “absurd game” by President Andris Berzins, who declared that he was not going to take part in it. The parties in power, on the contrary, call on citizens to visit polling stations on election day and cast votes against the controversial initiative. The consent center, in turn, calls for a vote that is consistent with the personal convictions of each of the citizens.

In order for the amendments to the Constitution to be adopted, the support of more than half of the voters who participated in the last elections of the Sejm is necessary. This means that you will need at least 771893 votes to adopt a project.

Earlier in the newspaper "Vzglyad" a message appeared from the Speaker of the Latvian Parliament Solvite Aboltina, who said that the Seimas deputies do not have the moral right to vote for granting the status of the second state Russian language. At the moment, Russian is a foreign language in its status.

In Latvia, the current population is about 2 million people, 44% of which are Russian-speaking. 16% of them have the status of non-citizens, people who moved to Latvia during the USSR. The rights of citizens and non-citizens are about 80 differences, among which is that non-citizens can not participate in elections and referendums.
Ctrl Enter
Noticed oshЫbku Highlight text and press. Ctrl + Enter
We are
Latvian referendum. The majority of citizens are against Russian as the second state language.The Latvian Parliament will consider the issue of recognizing Russian as the second official language
46 comments
Information
Dear reader, to leave comments on the publication, you must to register.