1 2016 June
32
On the eve of the presidential palace "Akorda" (Astana, Kazakhstan) opened the summit of the Eurasian Economic Union. These days, the biennium marks the signing of the agreement on the creation of the EAEU. The summit is attended by the heads of the participating states: President of Kazakhstan (as host) Nursultan Nazarbayev, President of Russia Vladimir Putin, President of Belarus Alexander Lukashenko, President of Armenia Serzh Sargsyan and President of Kyrgyzstan Almazbek Atambayev. 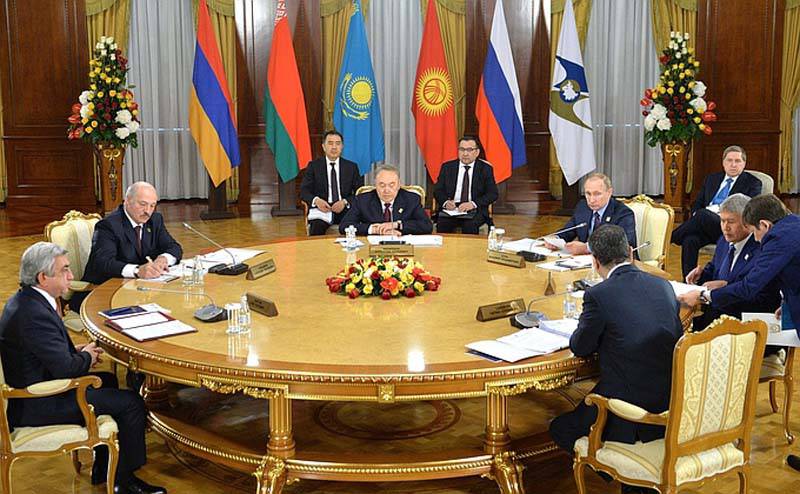 The stated agenda of the EAEU summit consists of 14 issues, including the formation of a single energy market (oil, gas and petroleum products), the deepening of trade integration, the search for opportunities to expand the partnership of the EAEU with foreign countries and economic associations.

As for the formation of a single market for hydrocarbons trading in the EEU, the chairman of the EEC board Tigran Sargsyan commented on the situation. According to him, the concept was approved whereby energy companies of the countries of the union education will receive "non-discriminatory access to the oil infrastructure of partners." In addition, according to Tigran Sargsyan, the EAEU countries will be able to purchase oil and petroleum products without quantitative restrictions and without export duties, and at prices that are market prices and are set at exchange trading. The concept of a single energy market will work no earlier than 2025 of the year.

The idea of ​​such an energy partnership was eventually supported by all the presidents, however, as they say, not without rough edges. For example, the President of Belarus, Alexander Lukashenko, was alerted by the wording “market prices” when making purchases of oil and oil products. “Non-discriminatory access to the oil infrastructure of partners” did not alert, but “market prices” alerted ...

As a result, the Belarusian leader criticized the path along which the Eurasian Economic Union was moving up to this point. According to Alexander Lukashenko, there is still no “barrier-free environment and equal conditions for all” in the EEU. Information Service BelTA cites the statement of the President of the Republic of Belarus:
Barrier-free environment and equal conditions in the EAEU have not been created. In whatever format our association functioned, the number of withdrawals did not change. They remained at the level of 600. Our domestic trade only falls with the signing of the agreement on the EAEU. This means that not all contractual positions correspond to the current situation in the economy and our expectations. We need to work out the mechanism of the work of the EAEU in applying unilateral measures to protect one country against other countries. We have taken the direction of industrial cooperation. We have decided on the parameters for the support of national producers and the development of exports. Now we need to begin the practical implementation of these tasks. The steps to integrate in the energy sector. Today we reviewed plans for oil and gas. But from concept to realization, the path is long. The reason for this is ourselves. The Eurasian Economic Commission must take comprehensive measures to implement the concepts. We are discussing the possibility of creating a single market for medicines and medical devices. However, here too there was no further talk. To determine the place of the EAEU in the world economic system, we need to create our own single market. It is necessary to be strong, to strengthen the union. It will be easier to have a dialogue when we speak from one position. Without this, we will not be able to effectively implement both domestic and foreign policy.
To be fair, it should be noted that the Belarusian leader was not the only president at the summit who expressed dissatisfaction with the forms of interaction either within the EAEU or the EAEU with external partners.

Thus, the president of Kyrgyzstan Almazbek Atambayev raised the issue of difficulties with the transit of Russian (and not only) goods through the territory of Kazakhstan. According to him, various barriers continue to persist that impede the free movement of goods to and from Kyrgyzstan.
The President of Kazakhstan, Nursultan Nazarbayev, responded to this remark. According to Nazarbayev, in the year of the chairmanship of the Republic of Kazakhstan in the EAEU, everything possible will be done to increase the level of integration and to remove barriers that hinder the growth of commodity turnover in particular and the economic development of the union.

Press office Kazakh leader cites a fragment of his statement:
In this regard, at my suggestion, as the chairman of our organization, 2016 was declared the "Year of deepening the economic relations of the EAEU with third countries and key integration associations." In my address, I mentioned that we see the EAEU as an open community, organically integrated into the world economic system, serving as a reliable bridge between Europe and Asia. Last year, the first EAEU agreement on the creation of a free trade zone was signed with Vietnam. Today, issues of cooperation with China, India, Israel, Egypt, Iran, Cambodia and many other countries are being worked out. The possibility of establishing trade and economic relations of the EAEU with integration associations, such as the EU, SCO, ASEAN and others, is considered separately. Internal issues of interaction, in general, are already regulated. I am confident that the implementation of the tasks and principles of the Union’s activities will serve as a powerful impetus for the economies of our states. We should look for opportunities, as in these difficult conditions, when we experience a sharp decline in mutual trade, to find other ways of interaction. Cooperation within the framework of the association allows us to consolidate resources and create favorable conditions for joint economic development.

Armenian President Serzh Sargsyan said that the EEAA has not only economic problems, but also problems related to security issues. According to Sargsyan, “the escalation of the conflict in Nagorno-Karabakh by Azerbaijan has become a challenge to the security of the EAEU.” Serzh Sargsyan stated that “the risk is obvious.” At the same time, the head of Armenia noted that such a conflict pushes investors away from the EAEU, who are not ready to invest in projects, if significant risks remain associated with the presence of “permanent hotbeds of conflict”.

Press Service of the President of Armenia quotes his statement:
Armenia cannot stand aside in case of aggressive actions of Azerbaijan in relation to Nagorno-Karabakh. Of course, the Karabakh self-defense forces restored order and took control of the situation. Russia played an important role in this, to which Azerbaijan requested to restore the cease-fire regime. In Vienna, with the mediation of the countries of the OSCE Minsk Group co-chairs, a meeting was held during which agreements were reached on establishing confidence-building measures - mechanisms for monitoring the line of contact and investigation of incidents. Armenia intends to consistently work towards the implementation of these agreements and continue the search for a peaceful settlement based primarily on the right of the people of Nagorno-Karabakh to control their own destiny and to self-determination. Armenia agrees with the co-chairs of the Minsk Group that this principle, like the principles of non-use of force or its threat, as well as the principle of territorial integrity are the basis for the settlement of the Nagorno-Karabakh conflict.

Even this rather brief overview of the EAEU summit says that practically each of the presidents of the countries belonging to the Eurasian Economic Union is mostly focused on the problems of the state he heads, and not on the union as a whole. This is understandable. His shirt is what is called closer to the body. But at the same time with this complaint, then at each other, then at third countries, the number of problems only grows. Here and the fall in trade, and the remaining economic barriers and the desire of some to get to the resources and infrastructure of others, not wanting to share their own resources and infrastructure. All this so far resembles a communal apartment of impressive scale, where literally everyone is not happy with his neighbor, but at the same time he tries to pretend that they don’t do anything with a sourish mien on his face ... consensus in a communal? - it all depends on how abrupt the character of its inhabitants. Moreover, it can only be achieved when all these inhabitants understand that this is their common home, and therefore it needs to be kept clean and tidy, regardless of what you think about your neighbor or his level of welfare.

As a result, it seems that they agreed that “they will maintain a common house and oppose the“ infantile ailments ”of a supra-state entity, too, if possible together.

Almazbek Atambayev:
I believe in the future of the EEU. He is only two years old. The EEU is still very young. At the same time, it is clear that the union has great potential. There are already certain results, successes, there are misses, losses and artificially created barriers. But, apparently, it should be in a young body. But we all, the heads of state and our peoples, must clearly realize that we have no other alternative. We are responsible for the future of the EAEU, for the future of our countries.

Russian President Vladimir Putin saidthat “one should not expect any magic means from our interaction,” while adding that “such integration will help overcome current difficulties.”

Hopefully, the tension seen on the faces of the presidents in the above photo from the summit is not a reflection of the level of tension within the Eurasian Economic Union.