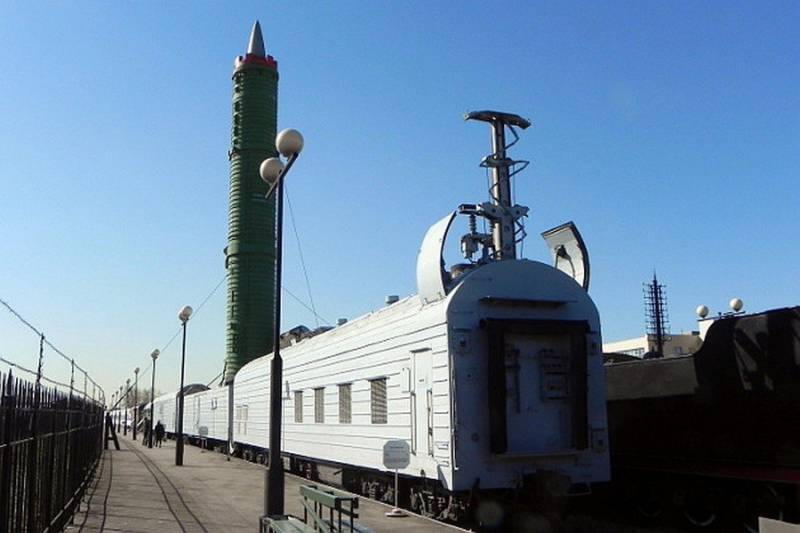 They say that new is well forgotten old. However, sometimes there are situations when a return to the old and expedient, and even necessary.

We are talking about BZHRK - combat railroad missile systems. At the end of the Soviet era, our country had such a miracleweapons. And the term "miracle weapon" is not ironic. BZHRK "Good for you", despite all the difficulties of exploitation, became that hemorrhoids for the secret services of our probable enemy.

Today, the likely adversary is mostly called a "partner", but the essence does not change one iota. NATO, as it was pulling up to the borders of Russia, continues its march in this direction, and the missile defense system, no matter how the US tries to convince everyone that it is directed against Iran, is increasingly seeking to settle also on our borders.

President Putin voiced that we will take adequate measures to counter. Apparently, one of such measures was the revival of BZHRK. Of course, not at all in the form in which they existed in 90.

A little excursion into history.

The Soviet rocket system 15P961 "Modedets" (RT-23 UTTH) stood on combat duty at the Strategic Missile Forces of the Armed Forces of the USSR and Russia in the period from 1987 to 1994 year in the number of 12 units. Then (by 2007 year) all the complexes were dismantled and destroyed, with the exception of two, transferred to the museums.

On the railways of the USSR and Russia had the symbol "train number zero."

The structure of BZHRK included a train of standard configuration for the complex: 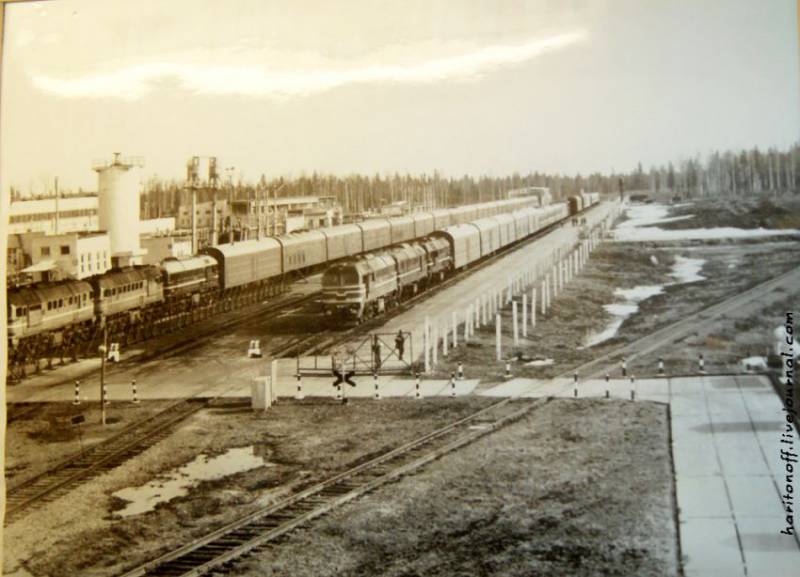 In each of the locomotives, a separate locomotive brigade was on duty. During the training of officers' locomotive brigades of BZhRK, for detailed acquaintance with the route, they were periodically seconded to civilian trains following the same route.

BZHRK looked like a normal composition of refrigerated and passenger cars. The starting modules had eight wheel sets. The remaining wagons - wagons - four wheel sets each.

Even from the satellite it was difficult to distinguish the BZHRK from the usual mixed composition. The only thing that could give out BZHRK - it's built locomotives. But over time, more powerful diesel locomotives were developed, and there were two locomotives. And for masking, the heavy trains of the Ministry of Railways of the USSR also began to be equipped with two pairs of locomotives. 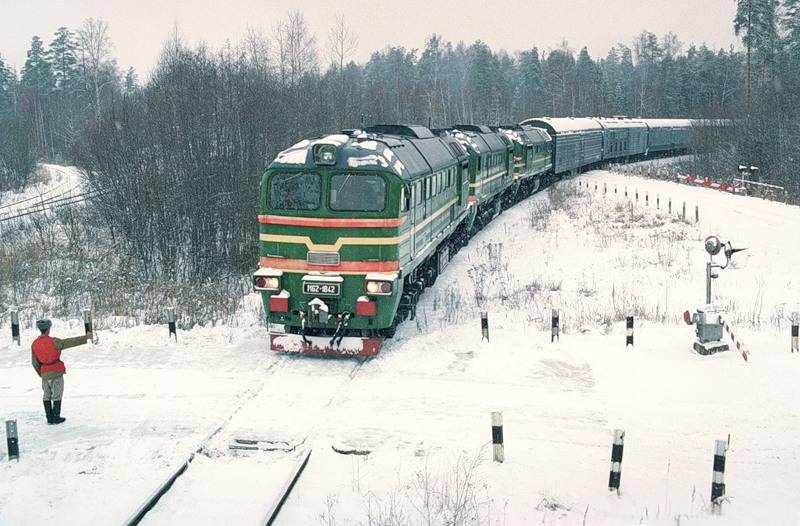 The brilliant creation of Soviet engineering. It was created by groups led by RAS Academicians Vladimir Fedorovich Utkin and Alexey Fedorovich Utkin. Alexey Utkin created the starting train himself, and Vladimir Utkin created a rocket and a launch complex. And they coped with the task, leaving behind a weapon that they could not create in the United States. This applies to both BZHRK as a whole and the RT-23 rocket. 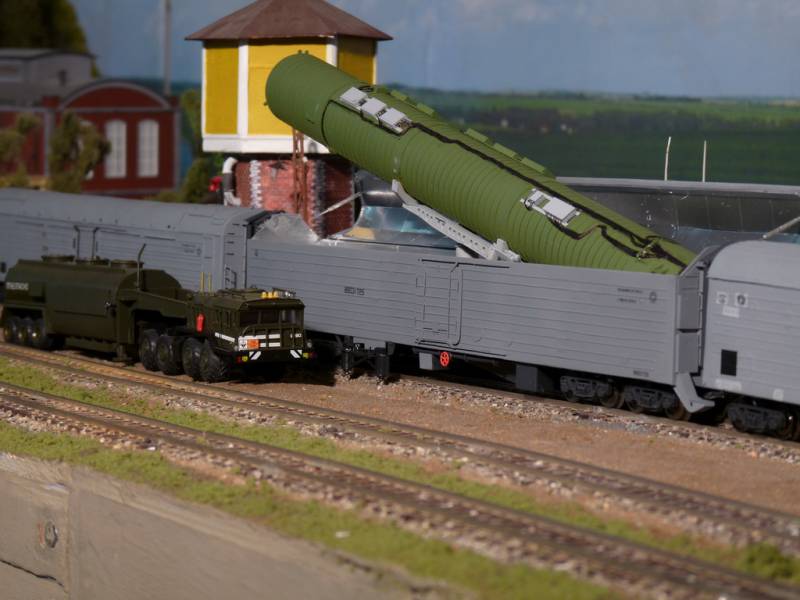 The head part of the missile is a separate type of individual targeting with ten combat units with a power of 0.43 Mt and a complex of means for overcoming missile defense.

The TP-23 was solid fuel, the head part was covered with an aerodynamic fairing with variable geometry (initially inflatable, later - folding). This design of the fairing due to the presence of restrictions imposed on the dimensions of the rocket size railway car.

In general, 512 inventions and patents were registered when creating this railway launching ground. It makes no sense to list them, because it takes too much space, and behind each patent is the work of Soviet engineers who successfully created a unique combat complex. What is worth only retractable nozzles and fairings, fitted to the dimensions of the car, the system of removal of gases from the canvas, the system of removal of contact wires, if the launch was carried out from the electrified section of the road. 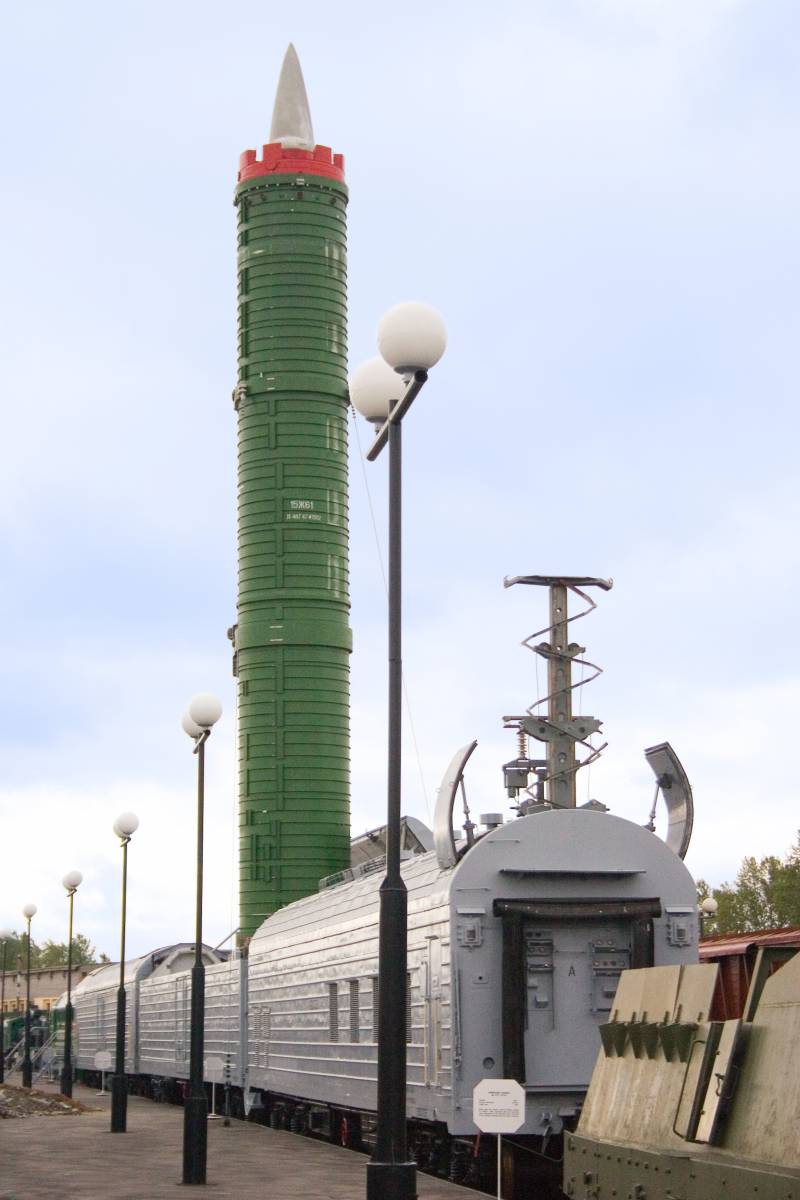 A strange device on the roof of the outermost car: a mechanism for withdrawing contact wires 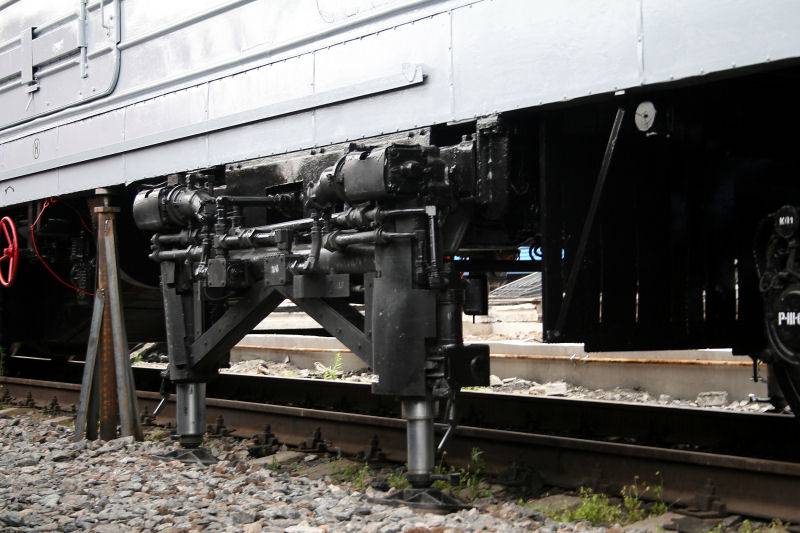 Hydraulic bearings, which accounted for the load during the launch of the rocket in the starting position

BZHRK "Well done", immediately became a headache for the Pentagon. To track them into orbit, a special grouping of satellites was launched, and at the end of 80, when BZhRK had already embarked on the routes, a container with tracking equipment was sent from Vladivostok to Sweden by rail as a commercial cargo. However, the Soviet counterintelligence container quickly "figured out" and it was removed from the train. American General Colin Powell once admitted to the founder of the BZHRK Academician Alexey Utkin: "Searching for your rocket trains is like a needle in a haystack."

Paradoxically, the Americans spent more money on tracking than the creators spent on the development of the train. And "Well done" quietly dissolved in the vast expanses of our vast country. And threatened with "scalpels" to potential opponents. 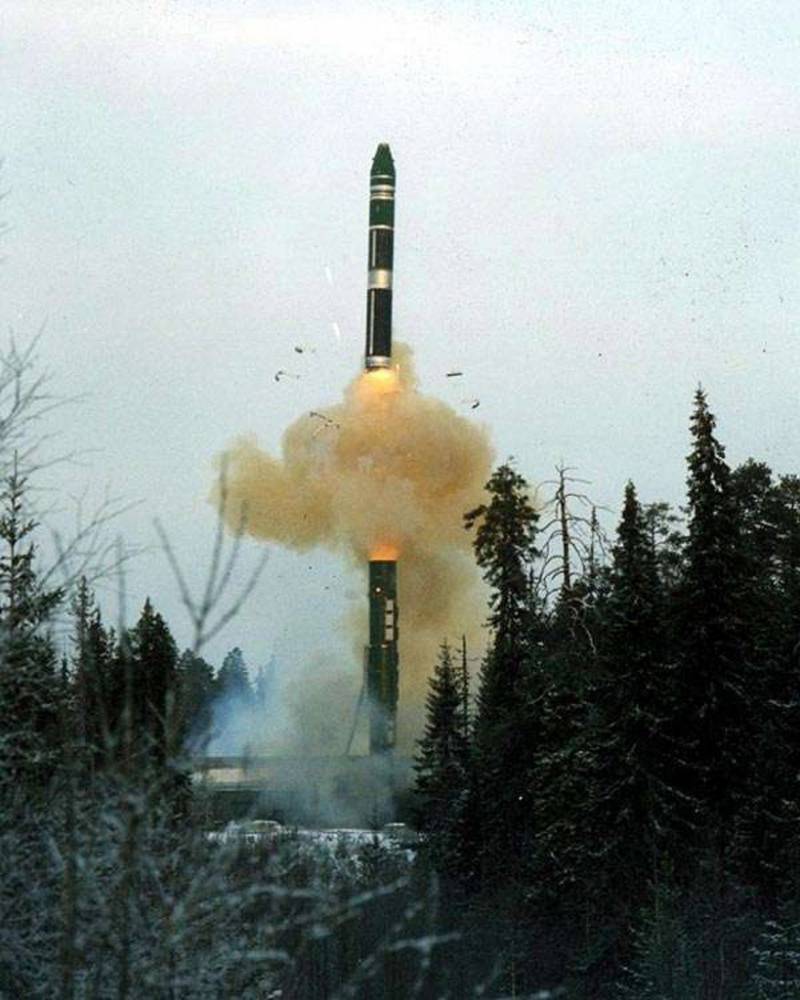 By the 1991 year, three missile divisions were deployed, equipped with BZHRK 12: in the Kostroma and Perm regions, the Krasnoyarsk Territory. Within the 1500 radius of kilometers from the location of the joints, the railroad track was modernized: wooden sleepers were replaced with reinforced concrete, heavy rails were laid, and embankments were strengthened with more dense gravel.

To completely disguise such work was carried out in other parts of the country.

Outside combat duty BZHRK was in shelter. Then he moved to a certain point of the railway network and divided into three. Locomotives diverted launchers to launch sites — they were usually located around a triangle point. But in general, the launch could be made from any point of the route.

The train had a fuel tank (also disguised as a refrigerator) and a pipeline system that allowed the locomotives to be refueled on the move. There were also sleeping cars for calculation, stocks of water and food. The autonomy of BZHRK was 28 days.

After launching missiles at one point, the composition went to the next - there were more than 200 in the Soviet Union. During the day BZHRK could go over a thousand kilometers. For reasons of secrecy, the routes were laid past large stations, and if they could not be passed, their rocket trains passed without stopping at dawn, when there were fewer people.

Since the BZHRK was planned as a counter strike weapon, the Shining experiment was conducted on 1991 - on the effects of electromagnetic radiation, and on Shift. The latter simulated a nuclear explosion of kiloton power. At the Plesetsk test site in 650 meters from the rocket train, 100 thousands of anti-tank mines that had been taken from warehouses in eastern Germany and laid with the 20-meter pyramid were blown up.

A funnel of diameters 80 meters was formed at the site of the explosion, the sound pressure level in the inhabited compartments of the BZhRK reached a pain threshold (150 decibels), one of the launchers showed that it was removed from readiness. But after restarting the onboard computing complex, the rocket was launched.

According to the START-2 agreement (1993 year), Russia had to remove from service all RT-23UTTH missiles before the 2003 year. At the time of decommissioning, Russia had three missile divisions (Kostroma, Perm and Krasnoyarsk), all 12 trains with 36 launchers. For the disposal of “rocket trains” at the Bryansk repair plant of the Strategic Missile Forces, a special “cutting” line was installed. Despite Russia's withdrawal from the START-2 agreement in 2002, during 2003 - 2007 all trains and launchers were destroyed, except for two demilitarized and installed as exhibits in the museum of railway equipment at the Warsaw station of St. Petersburg and in the AvtoVAZ Technical Museum .

At the beginning of May, 2005, as officially announced by the commander of the RVSH, Colonel-General Nikolai Solovtsov, BZhRK was removed from combat duty at the RVSN. The commander said that instead of BZHRK with 2006, the troops will begin to receive the Topol-M ground-based mobile missile system.

But Topol-M is no match for the Scalpel absolutely. Yes, more modern and protected, "Topol-M" is ten times inferior to the "Scalpel" in power of the warhead.

And then, finally, the news came that the revival of BZHRK began in Russia. Moreover, 12 May passed the information that the production of components of the new train, which will be called "Barguzin", has begun. And by the year 2020, the Barguzins will be on duty.

Of course, the development of technology has affected the appearance and composition of the new BZHRK. Three (and even two) powerful diesel locomotives are likely to replace one. As an option - gas turbine GT1-001 (locomotive with a gas turbine engine). It uses electrical transmission: a gas turbine engine that runs on liquefied natural gas is connected to a generator, and the current generated by the latter is fed to electric motors, which set the locomotive in motion.

The capacity of the gas turbine locomotive is 8,3 thous. KW, which is the largest indicator value for this type of locomotive in the world.

RZD provides the following characteristics of the tested model: speed up to 100 km / h, one refueling is enough for 750 km, fuel is liquefied natural gas. 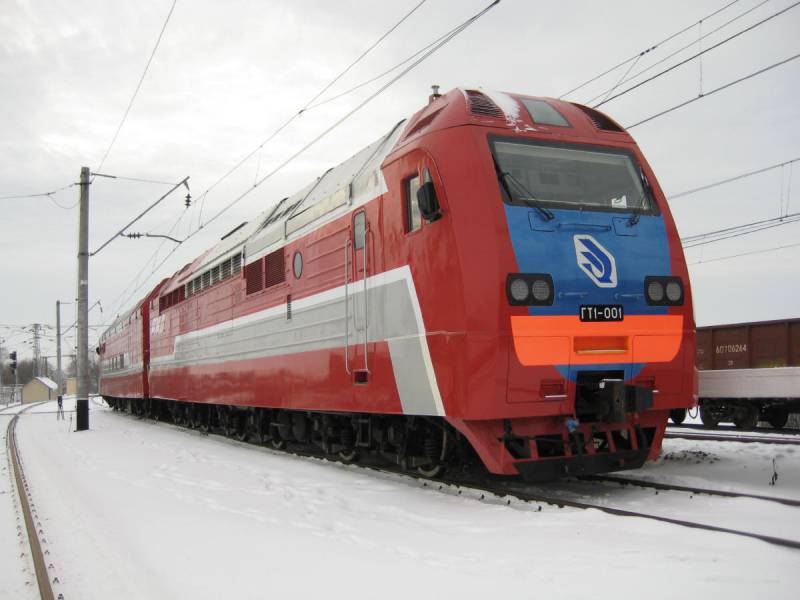 7 September 2011 of the year GT1-001 set a new world record by running a freight train around the VNIIZhT ring weighing 16 thousand tons (170 cars).

In service with one BZHRK there will be not one, but 6 missiles. And one train will be equated to the regiment.

The RS-26 missile system, aka Yars-M, aka Avangard, aka Boundary. In the modification specifically for BZHRK it will be "Frontier".

The missile is equipped with a separable warhead of individual targeting and has a set of means to overcome the missile defense. Solid, three-stage, flight range up to 11 thousand km, can be equipped with 4 warheads with a capacity of 150 — 300 kilotons.

Is such an approach adequate, recalling the words of Putin? I am sure that it is. Our "potential ps" calculated that when 25 disperses such complexes across our vast territory, the probability of damage to BZHRK is estimated to be no more than 10%. Subject to the use of missiles such as "Voevoda", or similar in accuracy and ability to fly. What our "potential n" is not yet observed. But "Frontiers", capable of flying 11 000 kilometers, quite quietly reached those lines ...

Well, there will be something to talk about before the US Congress, demanding new and new allocations of funds "for defense." Good luck, as they say.

If the Barguzins are really on the database by 2020, we will breathe a little easier. Yes, to create and build everything you need is a very expensive business. But BZHRK - not an aircraft carrier. It will be easier, and cheaper. And so much pleasure "potential" ...

At such times we live, unfortunately.

It is a pity that the brothers Alexey and Vladimir Utkin, who watched the death of their creations in the cutting lines, kindly provided to us by American partners, will not see this. 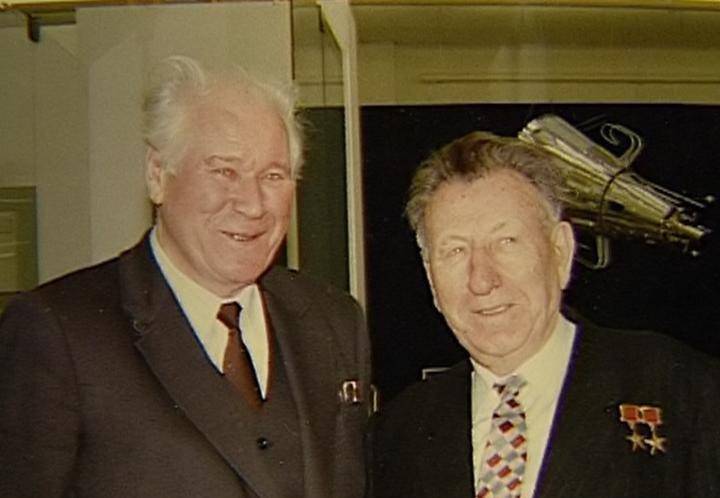 But if the "Barguzins" replace the "Well done" to safeguard the tranquility of our country, this means that the work to which the geniuses from the very depths of the Ryazan region have given their whole lives is done.