Bellver Castle - “my home is my round fortress”

Europe, as we know, in the Middle Ages was a real “country of castles”, where more than 15 thousands were built. But the castles in Europe were different. The earliest (of those that we know) - the castle of Doue-la-Fontaine in the French city of Angers, was built in the middle of the 10th century - that’s how long ago. But these locks were very simple, and their main part was the donjon tower. 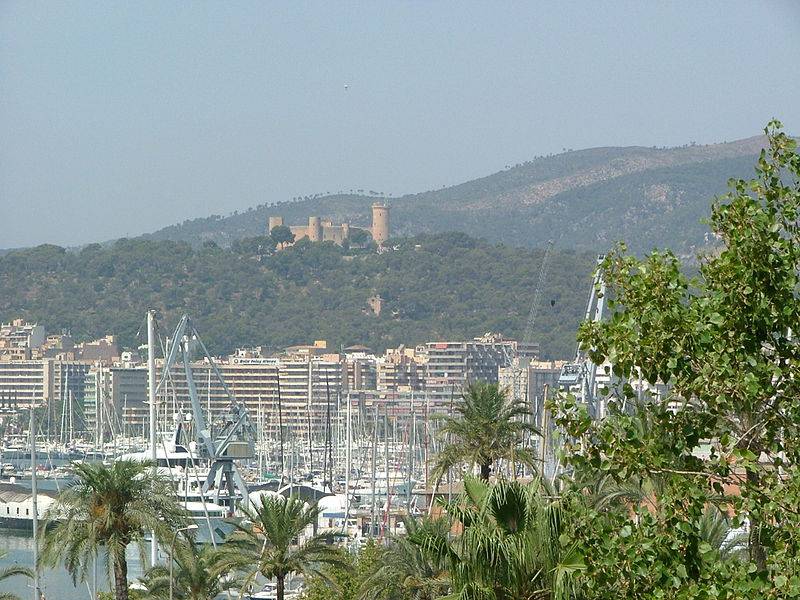 This is how the Bellver Castle is seen from afar for those who come to the island of Mallorca.

Some of these towers were very large, for example, this is the famous Tower of London, translated from the English simply “tower”. But there were other donjons, such as the Tower of the Counts of Flanders in Ghent, which they began to build in 1180. Downstairs was a dungeon, a kitchen and guest rooms, above — a chapel and halls, and what is interesting and even amusing: its upper gallery with watchtowers and battlements was built only in the 19th century to the needs of tourists. Before that, apparently, there was no need! 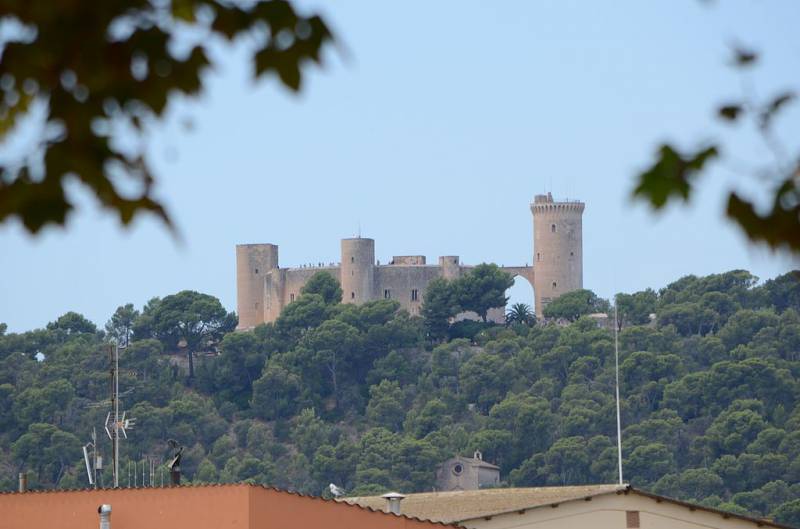 To inspect the castle, you need to climb it up the mountain!

A huge round donjon in Villeneuve-sur-Yonne was built by King of France Philip II August in the twelfth century. However, such castles still needed a courtyard, one tower could not do! So there were so-called "concentric locks", one of which was Beaumaris Castle in England. 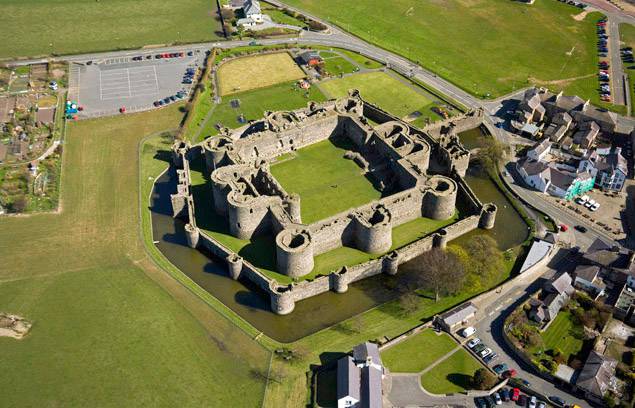 Beaumaris Castle in England is a typical “concentric castle”.

But the castles of noble feudal lords and sovereigns were required not only for war. For example, the emperor of the Holy Roman Empire, Frederick II used the octagonal castle Del Monte in Italy as a kind of hunting lodge, and the case when the locks were built with a similar purpose is far from the only one!

For example, a castle could be either a winter or summer residence. Here is a summer residence in 1300 - 1311 years. ordered to build the Spanish king Jaime II. He stands on a mountain height 112 m at a distance 2,5 km from the center of Palma. It all started with the fact that his father, King of Aragon, Jaime I, joined Palm in his possessions in 1229, and then in 1235, he was also crowned with the crown of the island of Mallorca. When, after his death in 1276, his sons shared his possessions, his younger son Jaime II received the title of King of Majorca. 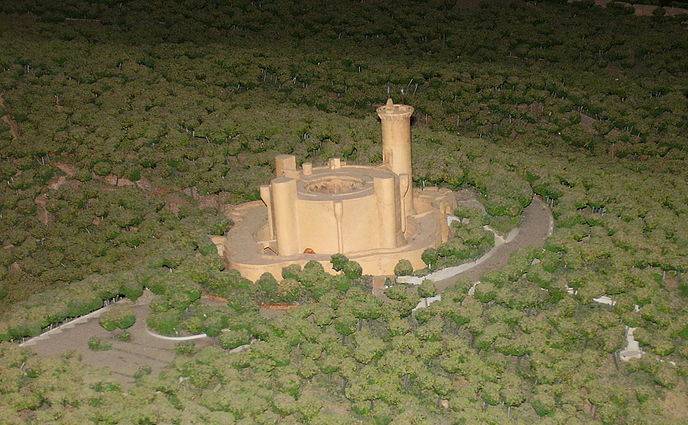 A model of Bellver Castle, on which its unusual architecture is clearly visible.

The construction of the castle of Jaime II was entrusted to the architect Pere Salve, who completed the construction of its main buildings as early as 1311. The interior was designed by the artist Francisco Cabalti, who already tried to please his crowned customer. For the construction of the castle used local sandstone, which was mined right at the foot of the hill on which it was built. It is believed that its prototype was the ancient fortress of Irodion, standing on the West Bank, which also had a round shape and one main big tower and three small towers. In less than 30 years, as in 1343, the castle came under attack: King Pedro IV of Aragon, conquering Mallorca, decided to start with him. Then in 1344, Mallorca was annexed to Aragon, and supporters of the last King Jaime III, including his widow, and sons, were kept in the castle. In 1391, a peasant uprising happened on the island, and the castle was again besieged, but this time its defenders succeeded in fighting back. And in 1394, King Aragon Juan I escaped here from the plague, the epidemic of which spread to Europe and reached Spain. Well, now, when we at least got acquainted with history of this unusual castle, let's take a little walk through it, as if we visited the beautiful city of Palma in Mallorca! 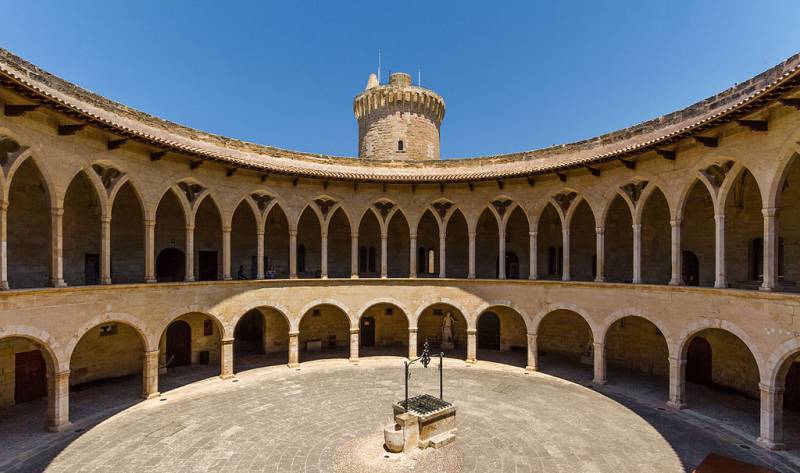 This is the courtyard from which we will begin our excursion. The courtyard is located inside the citadel, which has a diameter of about 50 m. There is a two-tier gallery along its entire perimeter. The arches of the first floor are round. They are supported by the 21 column, and the Gothic arches of the second support 42 octagonal columns. This is a typical Italian style - a combination of antiquity and Gothic, which is beautiful and rational. 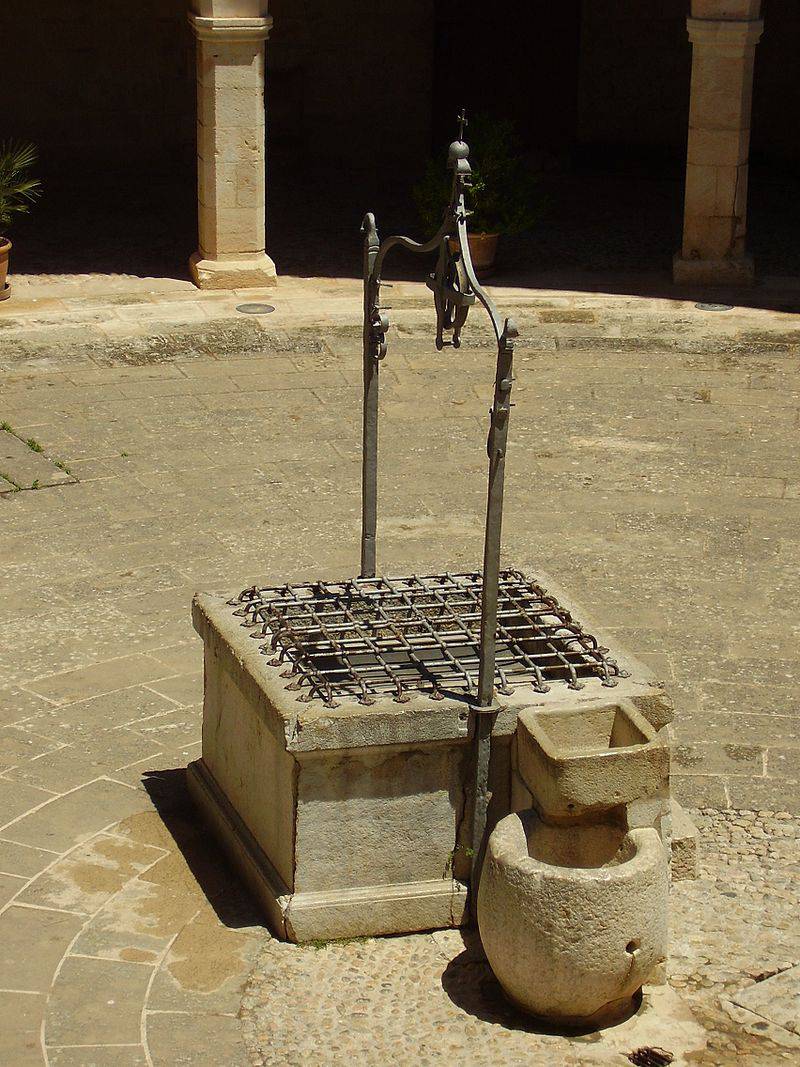 In the middle of the courtyard there is a well, which supplied the castle with water. 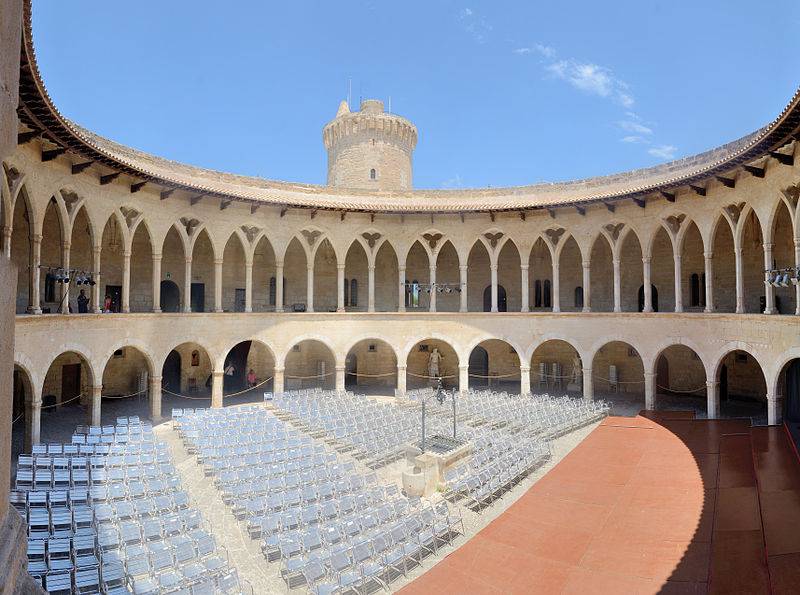 But this is the same courtyard, but only turned into a theater hall. We can say that this is just the perfect place for the production of Shakespeare's tragedies: "There is no sadder story in the world than the story of Romeo and Juliet." No scenery in this place is just needed! 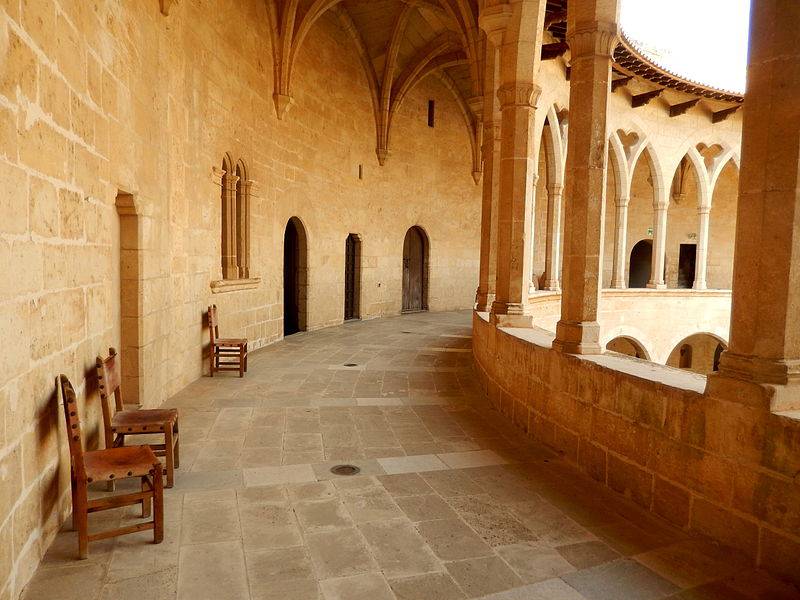 We go around the yard through the gallery and if someone is tired, he can sit down ... 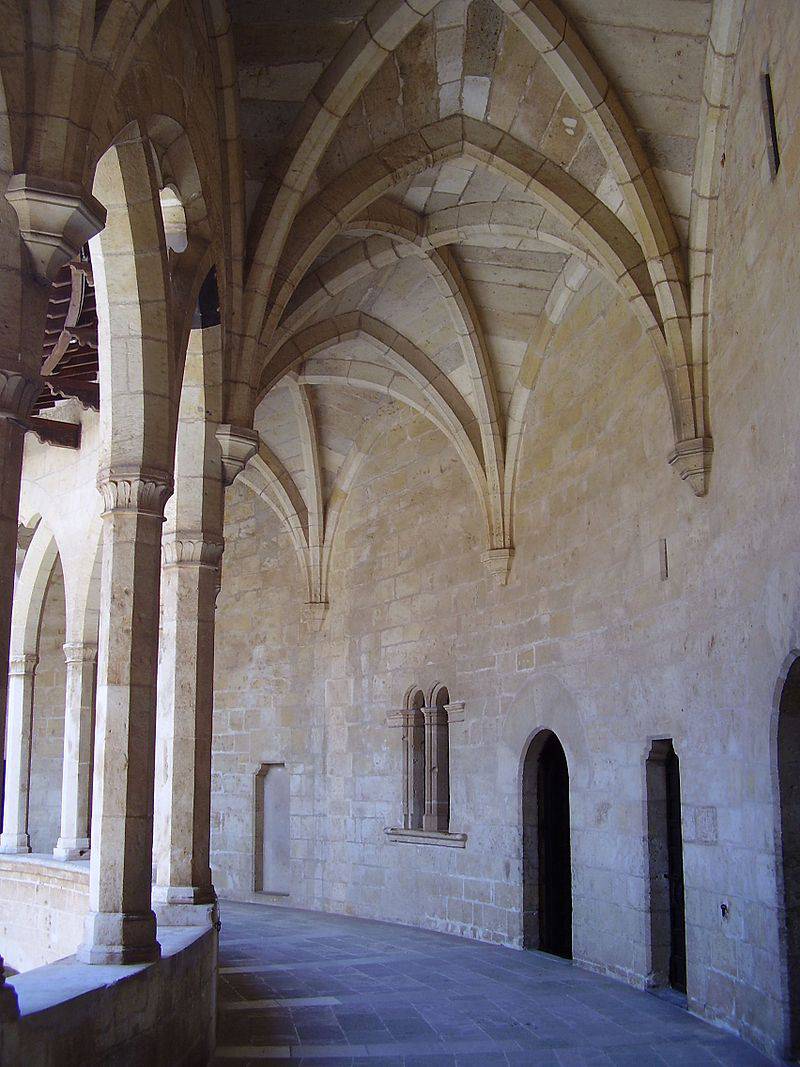 On the second floor, the ceilings are still typically Gothic. The reliability and durability of such a design proved time itself!

In the 17th century, the castle was modernized to install artillery. In the 1713 year, a covered bastion was also built on the north side. And in the XVIII century, the castle turned into a prison for important political criminals. At the beginning of the 19th century, the Spanish politician and writer Gaspar Melchor de Jovelyanos languished here, who compiled his first scientific description. The French physicist Francois Arago, accused of espionage, was also hiding here. So we can say that this is partly the “Spanish castle of If,” even if there are not so many famous names associated with this castle. 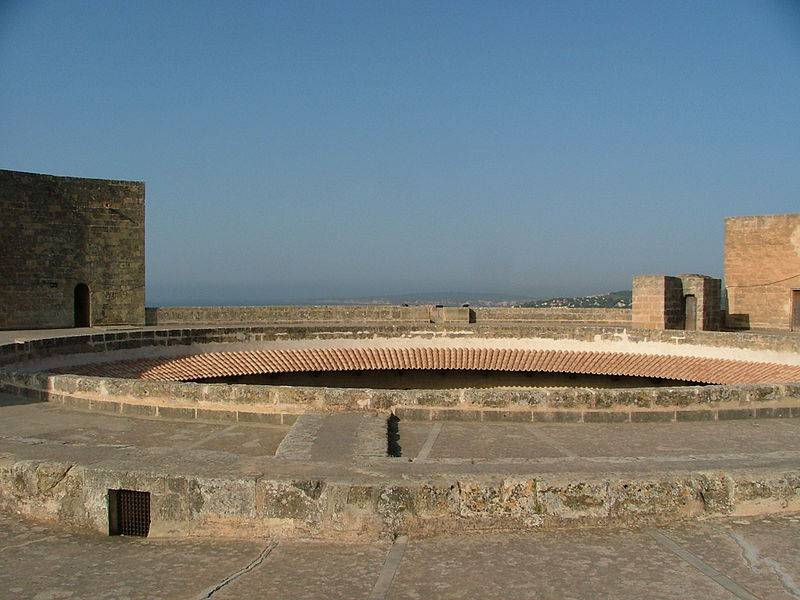 Now we climb to the roof and see that it is completely flat, that it offers a wonderful view of the city and the port, and that there is simply no better place to defend the castle. 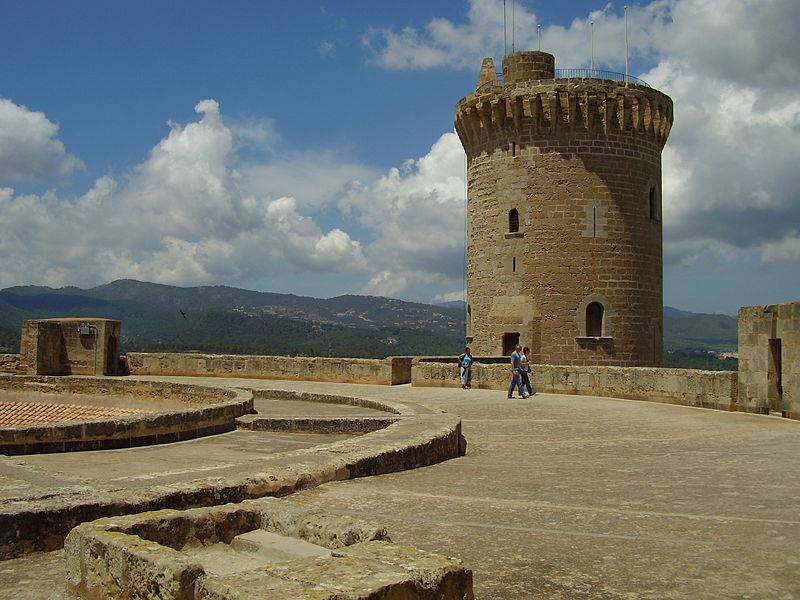 The width of the roof is such that it is free to ride a bike. 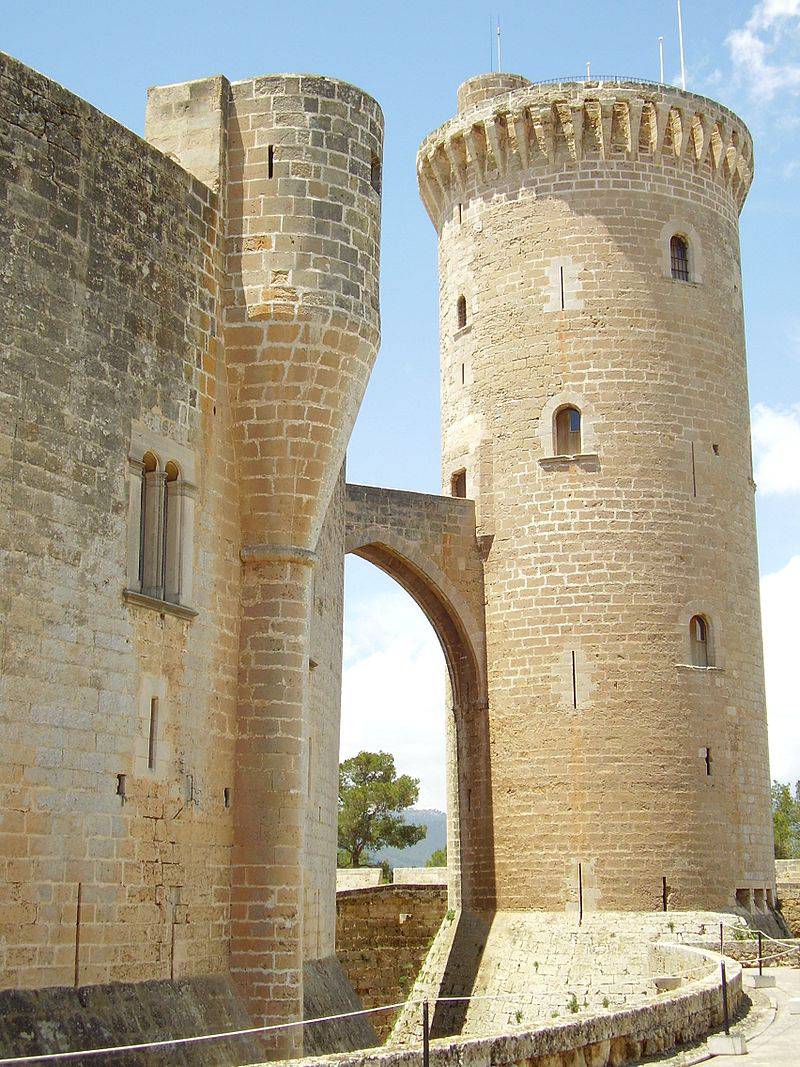 Three towers were added to the massive citadel, in terms of the letter U, and the donjon tower, to which, from the roof (!), Is truly an architectural sophistication, there is an arched bridge seven meters long. The height of this tower is 25 m, it has four floors and is oriented strictly to the north. The diameter of the tower is 12 m, and its ring is crowned with machined 38. The height of the lowest floor where the dungeon was located is five meters. Three large horseshoe-shaped towers are oriented on three other cardinal points, and 4 small towers indicate, respectively, the north-west, north-east, south-west and south-east directions.

In 1931, the castle entered the Mallorca municipality to turn it into a museum. But in 1936, he was again transformed into a prison. Now for the 800 rebel nationalists. And they paved the highway leading today to the castle. In 1976, it opened the Museum of the History of the City, starting with the first settlers of Palma and until the Middle Ages. There is also a collection of sculptures belonging to Cardinal Despuch. The courtyard is skillfully suited for various recreational activities. For example, it hosts a classical music festival with the participation of the Balearic Islands Symphony Orchestra. 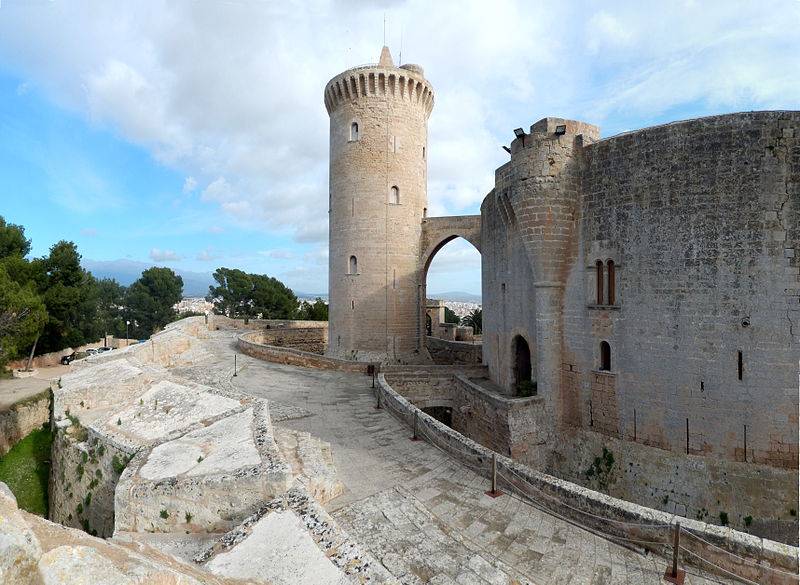 And now let's study it a little more, so to speak, defense functions. Look: the castle citadel is surrounded by a dry stone moat, as well as a detached donjon, but the castle also has an external wall with loopholes for artillery, and behind it another moat! 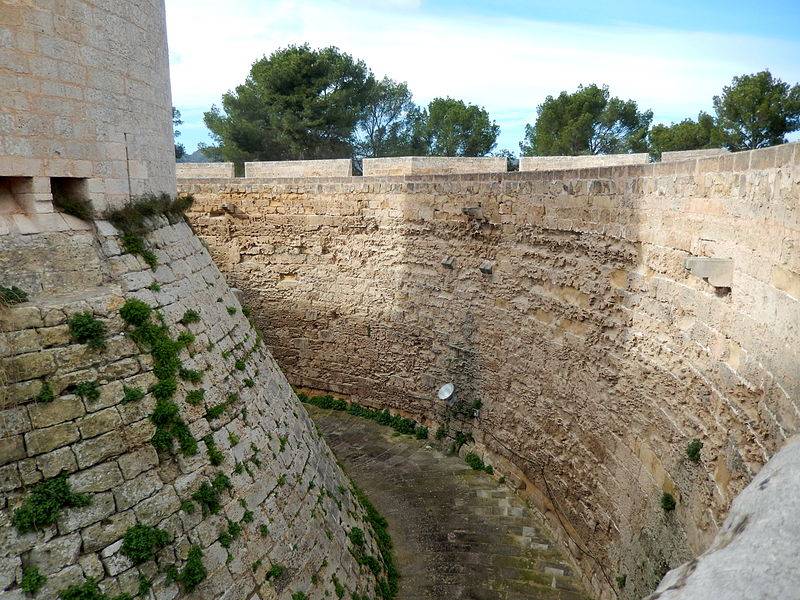 There he is, this moat, lined with stone from all sides! 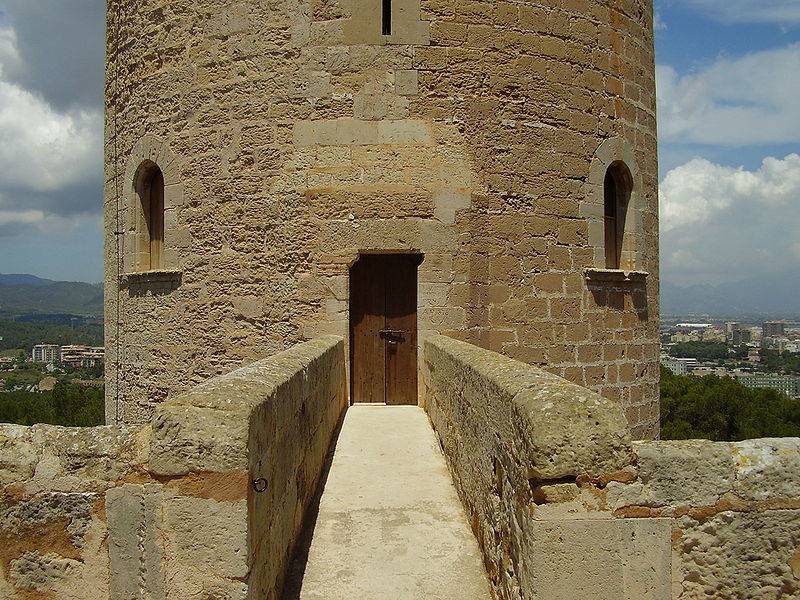 The bridge to the donjon is very narrow, and right above it is a loophole for shooters. 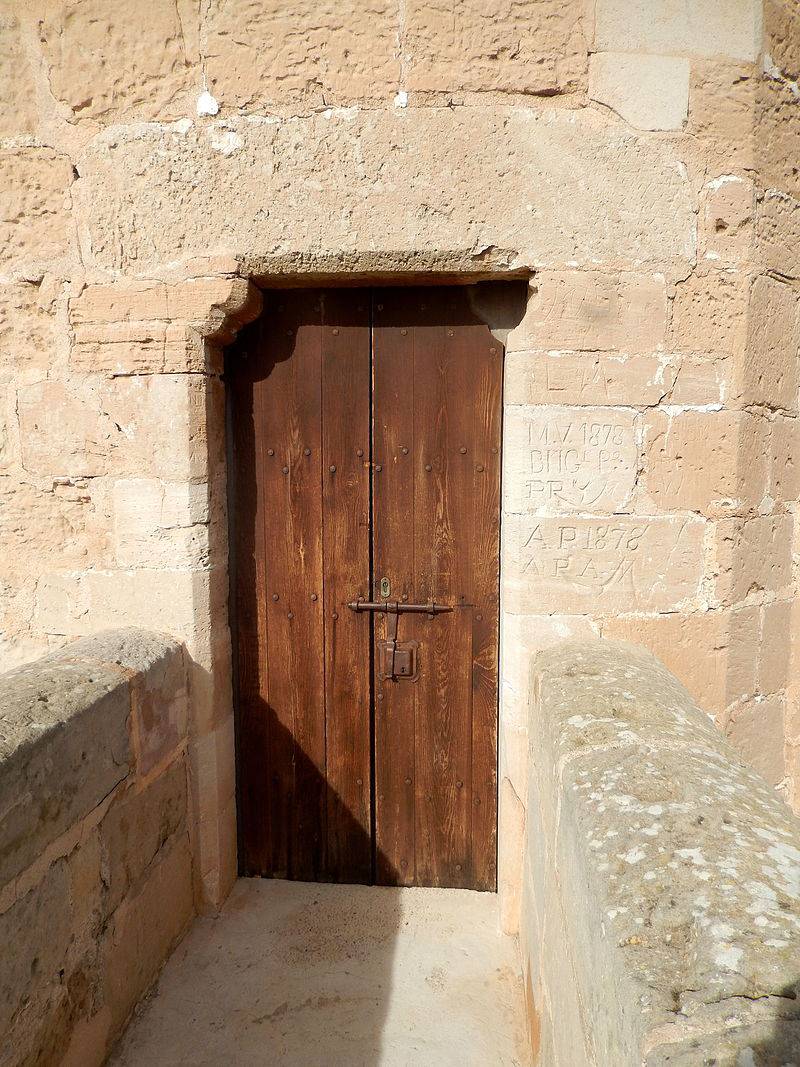 The door is quite narrow and, standing under the machining machines, it can’t be broken in any way, because they just throw stones at you from above!

On the first floor of the two-story citadel there were utility rooms and servants' rooms. There are only narrow loopholes in the wall that run all the way around. On the second floor there were royal chambers, a kitchen and a chapel. The stairs connecting the floors are spiral, which also prevents attackers from going upstairs, while defenders, on the contrary, are very helpful. 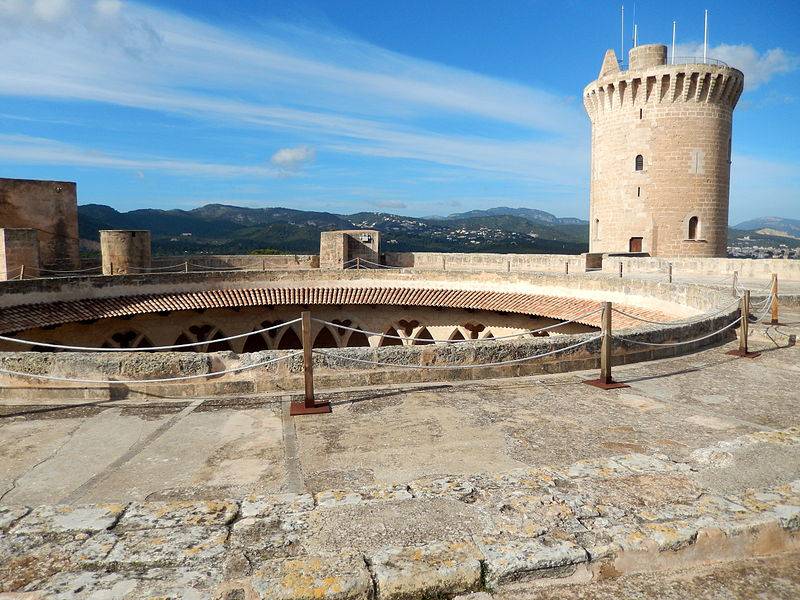 Interestingly, along the perimeter of the roof of the castle there used to be teeth, but for some reason they were removed during the reconstruction held in the 17th century. 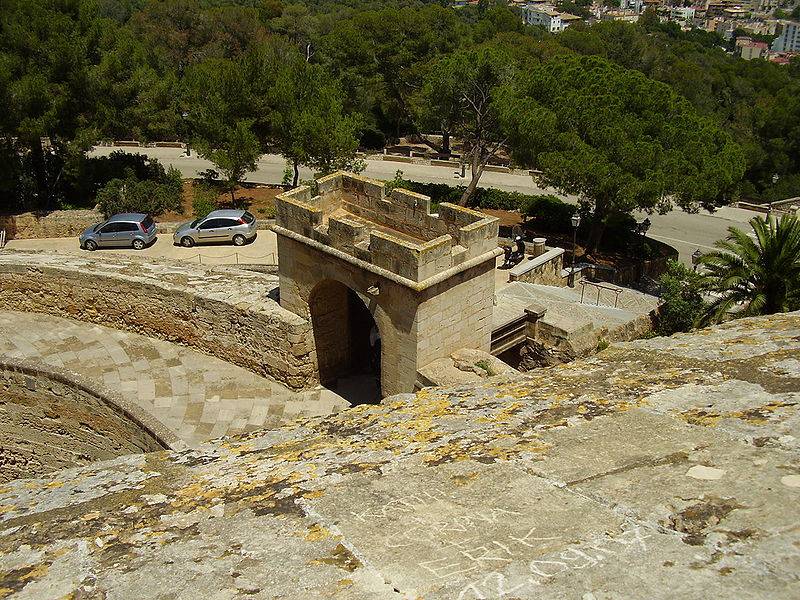 The main entrance to the citadel of the castle is located next to the northwestern turret, and the bridge in the shape of the letter D leads to it, so that the one who enters the castle must turn his back on his main tower. There is another entrance, at the southwest turret, and it is arranged in the same way. 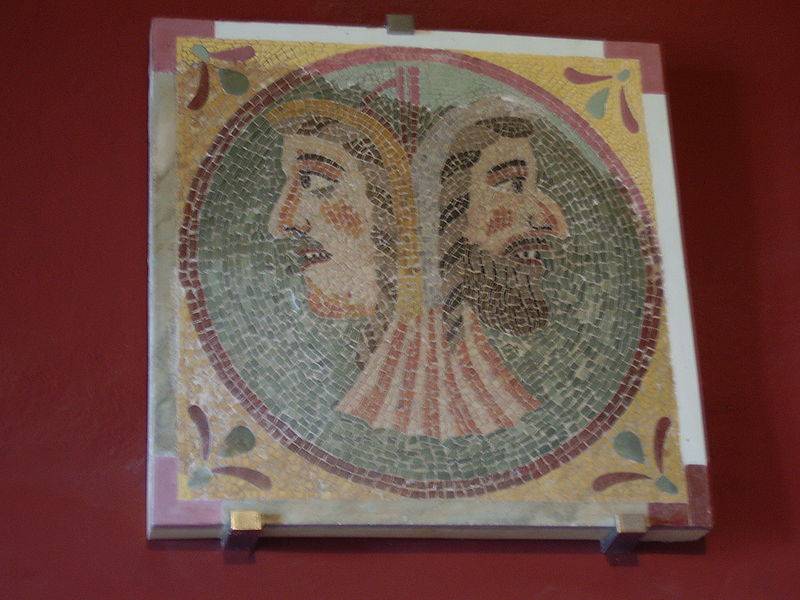 As already noted, the castle houses a museum that is decorated with preserved mosaics ... 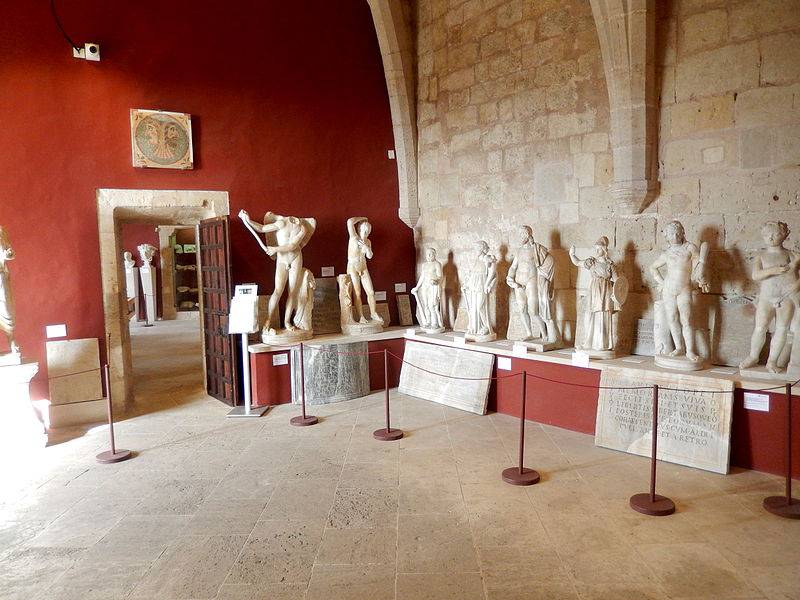 ... And in which you can see these sculptures and much more!

In conclusion, it should be said that due to its location on the hill for primitive artillery of the XV - XVI centuries. This lock was a tough nut, because the guns of that time had to shoot from bottom to top. But, of course, with the progress of artillery, any castle, even the most perfect, became vulnerable to it. 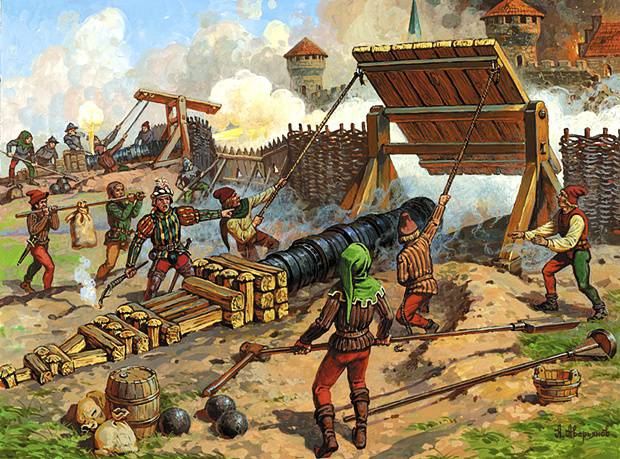