How to protect the state symbols of Russia from "local designers"? 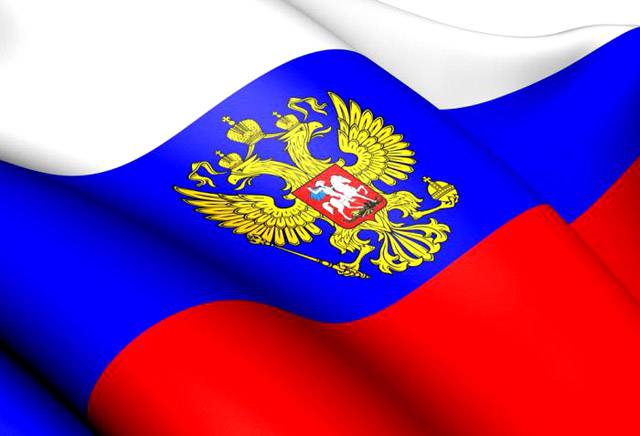 State symbols of Russia, such as the flag and emblem, require constant protection. Especially in the regions, periodically claiming “special rights” and “special status”, where “local rules” and “local symbols” have been implemented for decades, and the state authorities are not too carefully, voluntarily or involuntarily distorting them.

On the eve of the holiday 9 in May in Ufa in front of the building of the main heat and power plant of the city - CHP-1 hung the Russian flag. True, upside down. Nobody corrected. So he hung on Victory Day, while Ufa residents did not post photos on social networks (group BashDTP).

The version was expressed that, perhaps, on holidays, the thermal power station employees received a delegation from the Serbian Republic - after all, this is what the Serbia flag looks like. How to know, how to know ... 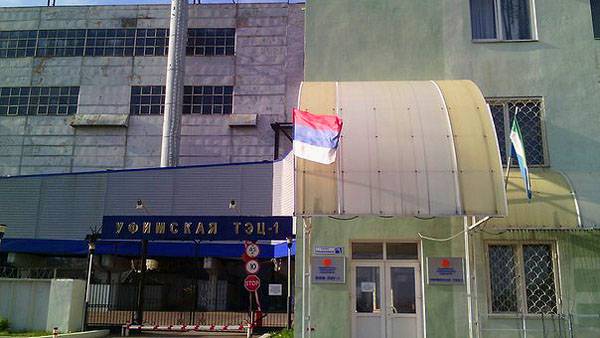 For example, during the celebration City Day The concert platform in front of the Ufa city administration building was decorated with banners depicting the flag ... of Bohemia and Moravia. Instead of white-blue-red stripes, as expected, there were white-red-blue, as on the flag of the Protectorate of Bohemia and Moravia (the territory of the current Czech Republic) - a state that no longer exists in 1945! 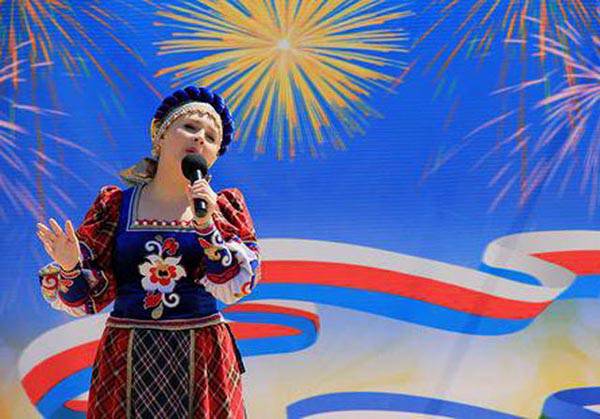 This case caused outrage of the audience and a lot of sarcastic comments on social networks. For example, Blondjew wrote: “the most“ blooper ”is that this“ flag ”was hanging for several days before the holiday in front of the windows of the city hall! those. ALL city officials watched him from the windows every day ... " Oleksandr horbunov commented like this: “don't worry already, choose ONE color, red, for example! Remember three different colors, and even consistently? NO! ”

By the way, after the holiday, girls from a youth organization appeared at the door of the Ufa administration, who distributed ribbons with a depiction of the Russian flag to employees of the institution, recalling what it actually looks like ... 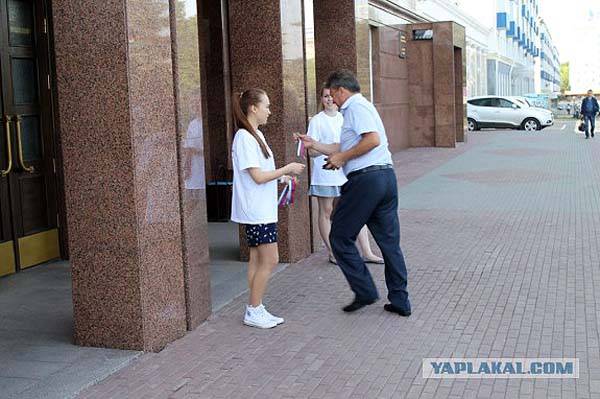 
There is a tendency with the flag, however ... Something natural for the region, where for a long time as part of the upbringing of “a citizen of sovereign Bashkortostan”, were claimed as state, other symbols — Salavat Yulaev and kurai.


The coat of arms of Russia ... Here the topic is a bit different.

I came across the fact that for some representatives of the local ethnocracy there are two heads of an eagle - a reason to cringe. This irony has its own tradition. I remember in my time the president of Bashkortostan Murtaza Rakhimov, setting his subordinates in a cheerful manner, publicly asked the question - what kind of bird is this? ..

I will not delve into interpretations and heraldry, but especially for local inquisitive minds I will note that the emblem has been of origin from the 15th century. By participating in the wars that Russia fought, the ancestors of the modern Bashkirs went into battle under the Russian flag and, accordingly, the double-headed eagle.

This symbol was present first on the seals of the units of the Bashkir-Mescheryaksky army, and after the formation of a separate Bashkir cavalry army - on the military banner. Under the double-headed eagle, the Bashkirs fought and died. Not under kuraem (umbrella plant, musical instrument). Although kurai is also a significant symbol for a certain part of people, which should be treated with care. 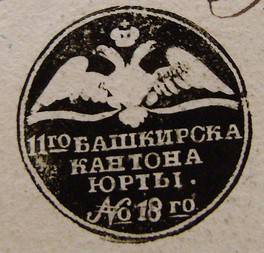 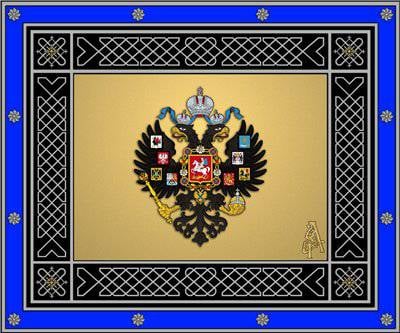 Banner of the Bashkir Equestrian Army arr. 1891 of the year (front side) 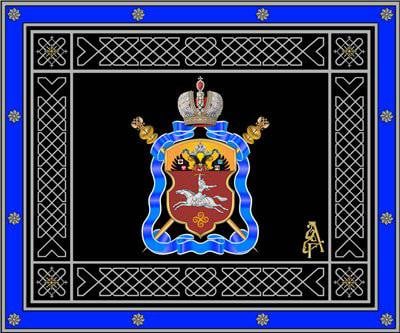 Banner of the Bashkir Equestrian Army arr. 1891 of the year (downside)


But let us turn to the modern local “adjustments” of the state emblem. Recently I was presented with such a leaflet: 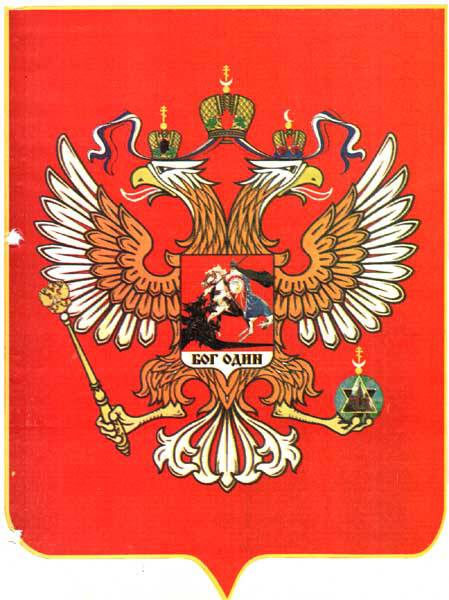 And now its most expressive fragments (from above - from the Appendix to the constitutional law “On the State Emblem of the Russian Federation”, from the bottom - “Ufa Design”). 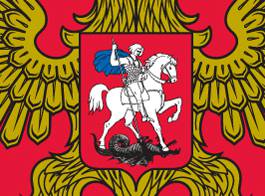 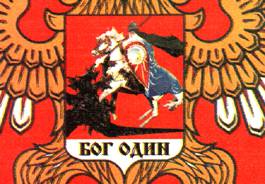 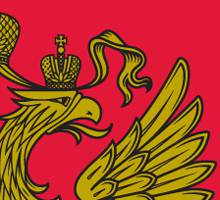 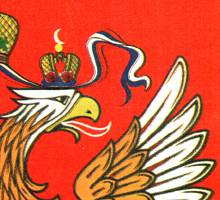 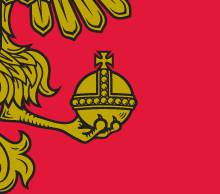 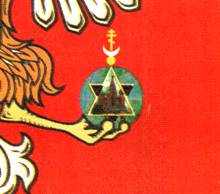 The format of the leaflet is 26,5 x 20, i.e. close A4. Printed in typography (not a printer!). Output, of course, no. Nobody hangs up such leaflets on the fences, she walks her hands among "her own people", she came to me by chance. The ideas of such a “adjustment” of the state emblem are not new; they wrote about it in due time. But to replicate in the printing ... Hmm ...

Naturally, there are questions: where were they printed? on which equipment? on whose money? What is the circulation? Who is the author of the design? But I repeat the main question - why was it necessary to replicate? For what purpose, exactly? Who and what they wanted to prove?

If, for example, at home ... then you can even place your portrait in the center of the coat of arms. And admire. If you demonstrate such a “coat of arms” on the street, you may have natural questions. As well as cuffs and bruises ... If you are replicating, questions for you are of a completely different plan ...

I gave only a few examples from local practice. But this, I think, is enough.

State symbols are not nonsense, they are fundamental values. For a long time no one cared about them at all. I remember well the times when the Russian flag was torn from the Ufa television center. And no one then defended him. On the contrary, they fawned upon ... And those who did it were strongly encouraged (they still broadcast from the TV screens of Bashkir satellite television). That is, the problem, as it seems, is to a large extent a personnel property.

The carriers of state ideas are concrete people, statesmen (“first the interests of the Fatherland, then my personal ones”), it was they who created the great country. In Soviet times, they were her support, but then they were on the periphery. In “national regions” such people have been squeezed out of socially significant spheres of life for decades - politics, state administration, municipal government, education system, social sciences, toponymy and heraldry, museum business, book publishing, mass media (TV in the first place). Today we are reaping the benefits ...

Changes occur, but extremely slowly. According to my observations, in the “national regions” Moscow is late all the time. Sometimes for a year or two, sometimes for five. So you can not have time ...

So what to do next? To organize monitoring of state-significant symbols? Strengthen control?

Monitoring, of course, is necessary, but not only at the regional level, but without fail at the all-Russian one. I do not call for the creation of a special character protection service. There is an antimonopoly service (for example, the FAS recently defended the symbol "Motherland is calling!"). But, perhaps, it would be more effective to transfer special powers to protect state symbols to the Federal Agency for Nationalities, where experts are concentrated.

They, as they say, and the flag in hand. Both literally and figuratively.

Ctrl Enter
Noticed oshЫbku Highlight text and press. Ctrl + Enter
We are
Why am I proud of my country?Mystery of state symbols
Military Reviewin Yandex News
Military Reviewin Google News
94 comments
Information
Dear reader, to leave comments on the publication, you must sign in.