31 May 2016
7
At an exercise held in Grafenwehr (Germany), the crew of an assault vehicle designed to make passes in minefields, demonstrated how exactly a mine was exploded at a distance by photographing the entire procedure on a GoPro camera. The teachings took place on 19 in May, and the video itself appeared on YouTube’s popular 23 May 2016 video hosting. The M1 Assault Breacher Vehicle ABV, an assault armored demining machine known by the nicknames "Schröder", a shredder, a chopper, became the hero of the video. It is worth noting that this machine often becomes the hero of popular videos.


The detonation of mines, land mines and improvised explosive devices (IEDs) is carried out using an elongated demining charge. With it, for example, you can make passes in anti-tank minefields in an explosive way or clear roads and communications to ensure the safe movement of soldiers and military equipment. The charge is detonated after it falls on a minefield. Mine exploders are fired from a powerful shock wave, forming passages in minefields, eliminating landmines or IEDs installed along the roads. A video posted on the Internet shows a remote detonation of an anti-tank mine when a demining charge is dragged onto it.

The M1 ABV assault clearance vehicles are in service with the US Army and Marine Corps since 2010. Total built at least 39 such machines. The plans were the construction of 52 assault clearance vehicles for the US Marine Corps and 187 for the US Army. The first case of extensive use of combat vehicles was noted in 2010 in Afghanistan as part of the joint operation of the US Marine Corps and the International Security Assistance Force ISAF (NATO-led international contingent of troops operating in Afghanistan from 2001) during Operation Moshtarak held against the Taliban from February 13 to December 7 2010. At the same time, this technique was first used in Afghanistan, most likely as early as December 2009.

If in the XIX century sappers could still get along with a simple set of tools: shovels, saws, axes and other manual devices of labor, nowadays in order to open the road tanks, armored personnel carriers, infantry fighting vehicles and infantry, heavy engineering vehicles are needed that are able to make a safe passage in the minefield quickly enough, fill up an anti-tank moat, cross over, demolish wire fences and clear road debris. The US-made M1 ABV combat vehicle meets these requirements of our time.

The M1 ABV assault clearance vehicle, or a pass making machine, was developed in Alabama at the Anniston military base. The customer was the United States Marine Corps. The need to create such an engineering machine arose from an analysis of the experience of the combat operations of the American forces in Afghanistan and Iraq. In these countries, American soldiers, as well as ISAF soldiers, often faced the threat of exploding mines or improvised land mines, which the militants installed on the roadsides.

It is worth noting that the military approached the issue of remote clearance in the 60-s of the XX century. The method of demining practiced before that with the help of artillery shelling of minefields was not effective enough and required the involvement of a sufficiently large number of artillery units and a large expenditure of ammunition. Therefore, in 1960-ies in the USSR, a method of remote-explosive demining using a jet extended charge was developed. The first such machine entered the Soviet Army's arsenal in the spring of 1969. It was a UR-67 remote mine clearance divisional system, built on the basis of the BTR-50PK with the installation of specialized equipment.

In the United States, the M58 MICLIC (Mine Clearing Line Charge), a remote mine clearance system, was created for the same purpose in the United States, which is designed to explode mine passes in minefields. In a flexible polyethylene hose with a length of 106 meters, charges of the well-known C4 explosive are placed, which, in an explosion, trigger the pressure-activated anti-personnel mine and anti-tank mine explosives, resulting in a land cleared of mines up to 6-14 meters and up to 100 meters . This strip is completely free of operational mines. For the transportation of this installation in the American army usually used wheeled or wheeled-tracked trailers. At the same time, it was installed on the floating conveyors of the US Marine Corps AAV7A1 and LVTP7A1, as well as on the М60A1 AVLB bridge laying system, and the M1 Grizzly Combat Mobility Combat Mobility Vehicle. Machine M1 Assault Breacher Vehicle has become another example of heavy military equipment, which is mounted on a similar system. 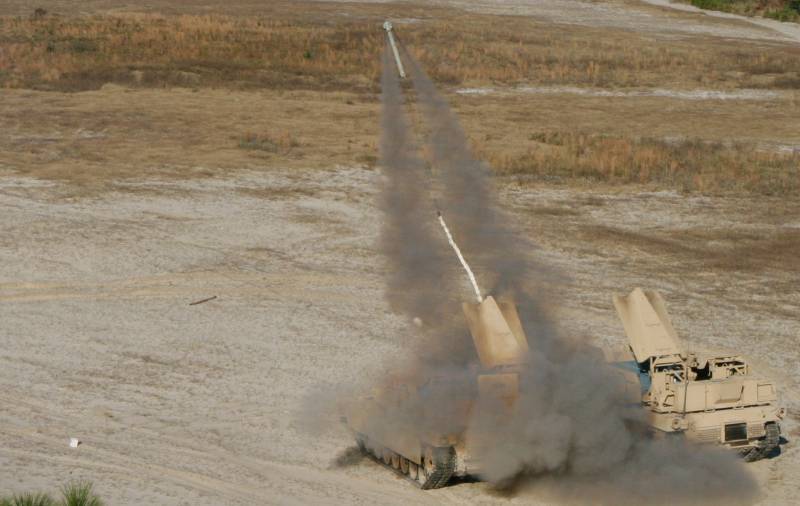 The base for the assault vehicle demining became the main American tank M1 Abrams. Thus, the old tanks, which arrived at the Anniston base for repairs, were granted a second life. It turned out to be more profitable to make sappers out of these “old men” than to upgrade tanks to a level that fully meets the requirements and challenges of today. In the process of reworking the guns from the tanks, of course, were dismantled. The defensive armament of the machine is only the 12,7-mm machine gun M2. The standard combined armor of the combat vehicle was additionally enhanced by ERA (Explosive Reactive armor, explosive reactive armor) units, speaking in Russian dynamic defense or remote sensing. Do not go anywhere and side screens, which not only provide additional protection against cumulative ammunition, but also reduce dust formation during movement.

Additionally, elements of the MICLIC remote mine clearance system were installed on the tank, the total ammunition of the С4 charges is 3175 kg. If he jerks directly on the assault demining machine, it will not seem to anyone. The principle of the system is simple and simple. A missile fired from a launcher aboard the machine unwinds a line of interconnected 5-pound components (2,25 kg) of С4 explosives. After laying such a line (its total weight reaches 800 kg), it is undermined in a minefield for safe remote clearance. Also, if necessary, a mine plow can be installed on the M1 Assault Breacher Vehicle, the depth of plowing of the ground, which is determined by skis-runners, sliding on the ground or a dozer blade 4,5 meter wide. In this case, the total length of the combat vehicle reached 12 meters, and the weight increased to almost 72 tons. Considering the fact that the power plant has not changed, the Honeywell AGT1500C engine, which develops the 1500 horsepower, is used, then the driving characteristics of the combat vehicle should have changed for the worse, which is not so critical for it, unlike the main battle tank . 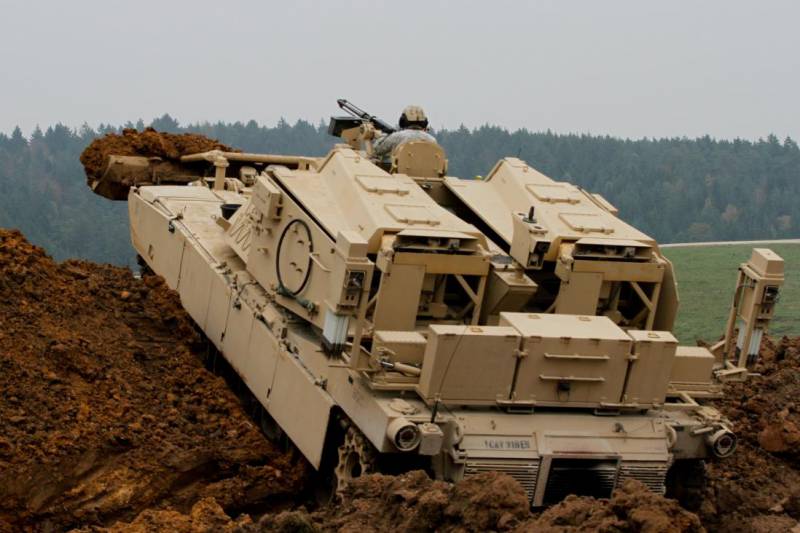 In addition to the tasks of demining the area, M1 ABV effectively eliminates blockages on the streets of cities, provides for the creation of passages in wire obstacles, helps to quickly overcome anti-tank ditches, falling asleep. This is especially important since the delay of tanks in an anti-tank ditch in modern realities is fraught with an increase in the probability of their destruction due to the use of high-precision missiles and projectiles against them or the appearance of attack helicopters over the battlefield. If we talk about the bulldozer blade, then it becomes a necessary attribute even of ordinary MBT. Thus, the latest modernization of the T-72 tank from Uralvagonzavod, intended for urban battles and built on the basis of the experience of urban battles in Syria, is characterized by the presence of this device. The bulldozer dump clears the barricades and obstructions, which are also formed as a result of the destruction of city buildings and structures, making passageways for infantry and equipment. This tank will be shown for the first time in Astana during the KADEX 2016 exhibition, which will be held from 2 to 5 in June of the current year.