The main thing - to suit sat 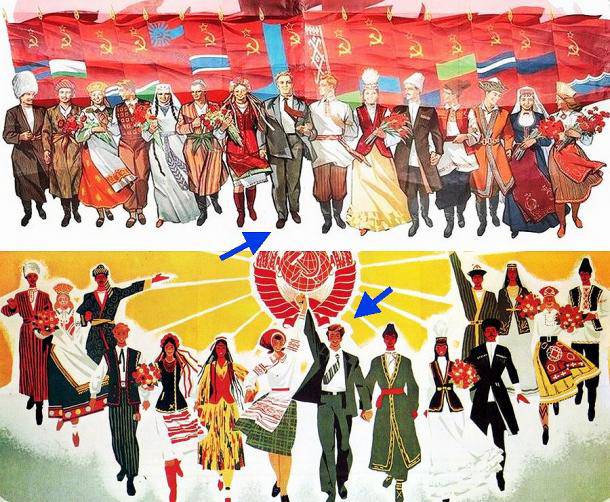 It always amazed me: why the Soviet posters about the “friendship of nations” under the flag of the RSFSR depict a man in a modern suit and tie, and the rest of the representatives of the “Indestructible Union” —who is what: embroidered shirts, trousers, kokoshniki, dressing gowns, wreaths, ribbons, belt scarves ... A solid "ethnography" ...

And all this crap has a very distant relation to real ethnography. In some of the microscopic Latvian folk costumes there are dozens, in each village they have their own “embroidered shirts”, their own kokoshniks, their own brooch-belts. And at all they are not as beautiful and rich as Soviet posters painted.

Generally speaking, the museum exhibit called “the wedding suit of a prosperous Latvian 18 of the 20th century” is a rare squalor of coarse sackcloth with rawhide slippers on the ropes. The "well-to-do" still had sneakers, and the rest of the Latvians walked barefoot all their lives, even at their own wedding.

My Latvian grandfather got his first boots in life only in 19 years, when he volunteered to fight in the First World War for the Russian Tsar-Father. Got out of stock from the non-commissioned officer. I'm not lying - he told me that himself.

Moreover, the Latvians against the background of the peoples of the other "free republics" still lived well. Google pre-revolutionary photos, you will find a lot of interesting things. For example, for most Western Ukrainians, the national costume looked like this: 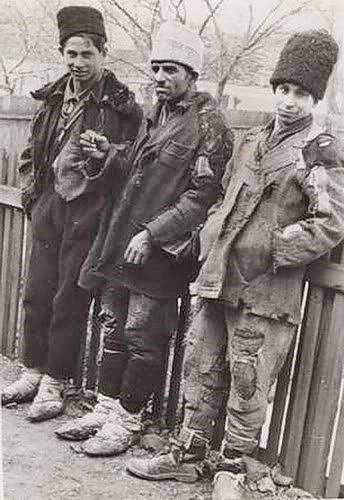 The national costumes of most of the inhabitants of Central Asia and the Caucasus did not look much better either ... Well, okay. In those dark times and outfits, American cowboys looked much more modest than Hollywood painted them later.


Why am I doing this? And the fact that the leaders of the USSR (from 1917 year to 1991-th - everything!), In my opinion, made a big and unforgivable mistake in the national policy of the country.

Its essence: the diligent promotion of "embroidery" (gowns, wreaths, kokoshniks, belt scarves, daggers). On the Soviet posters it is just rushing into the eyes. Russian - in a modern suit, and the rest - from the "Museum of Ethnography". From the invented museum.

In reality, such national costumes never existed. They were composed and painted in Soviet times. On the same Soviet posters and in the same Soviet concert films shows. The whole industry worked - artists, fashion designers, garment factories, the PR industry of those times.

You will laugh, I personally felt the influence of the Soviet “embroidery” industry. In the pink childhood I lived in the city of Krasnodar. I was very unlucky: I had a sonorous voice (not smoked, as it is now). Because I was recorded in the school choir. And this choir once won a city competition ...

As a result, one day, business aunts came to us, took measurements of us, and a month later we, unhappy schoolchildren, were dressed in “Cossack” costumes - boots, cloth riding breeches with stripes, striped shirts, and hats. We have not just been given horses.

As I remember: the product was first class. Even the boots were made of real leather (the first boots in my life!). And in this ammunition we delighted with our singing the ear of the Krasnodar party leaders at all ceremonial events ... I hate choral singing ever since ...

But the point is: we, the children, were dressed in adult costumes of “prosperous Cossacks” from the popular print movie “Kuban Cossacks”. We take into account: the lop-eared babies of my then-age even in the not poor pre-revolutionary Cossack families ran in long canvas shirts. Not that boots, not even personal pants, were supposed to be ...

At the start of the 90's, the Letts suddenly gained independence. What struck: they started to sew themselves national costumes in droves. It was an amazing sight: suddenly thousands of people dressed in the fashion of “well-to-do rural Latvians of 18 of the 20th century” began to walk around the streets. And not the fashion, the real samples of which are hung in the Museum of Ethnography, but the one that Soviet designers invented them in Soviet times.

The trouble is that the Soviet ideological pop culture has played a cruel joke with the national consciousness of the peoples of the USSR. Promoting the friendship of peoples, she inspired them through the “embroidery aesthetics” false impression of the initial independent prosperity - the total “prosperity” of their peoples.

Look again at the Soviet poster. The representative of Russia - in a simple factory suit. And all the nations of the rest of the 14 republics are in handmade attire from the best national designers. Embroidered shirts, robes, belts, hats, silver, gold jewelry, beads, monist, daggers and other bright jewelry ...

Visual images are strong stuff. When children see a movie about Rambo, they are smeared with green watercolor and play supermen: ta-ta-ta-you are killed. And they believe in the omnipotence of green watercolor, if it smears the face.

Similarly, in adults. If in the “family of fraternal peoples” (on a poster, in a movie, in a concert) your representative is dressed for life as “well-off Latvian”, “well-off Tajik”, “well-to-do Moldavian”, then the stories of his own grandfather are somehow forgotten his pants were turned off when his ripe testicles started peeking out from under his canvas shirt. And about the gold-embroidered robe, silver dagger, chrome boots, he could not dream to death.

And there is an illusion that if you somehow jump away from this Russian guy in a simple suit and tie, then you will automatically become a “prosperous” kid, like on a poster.

Latvians have already realized that by wearing an “embroidery” and a “kokoshnik”, they become similar to well-to-do Latvians from a Soviet poster. But wealthy - by the standards of the 18-th century. Ukrainians - not yet. They now have a period of "embroidery" in full swing.

Soviet poster is a strong thing ...