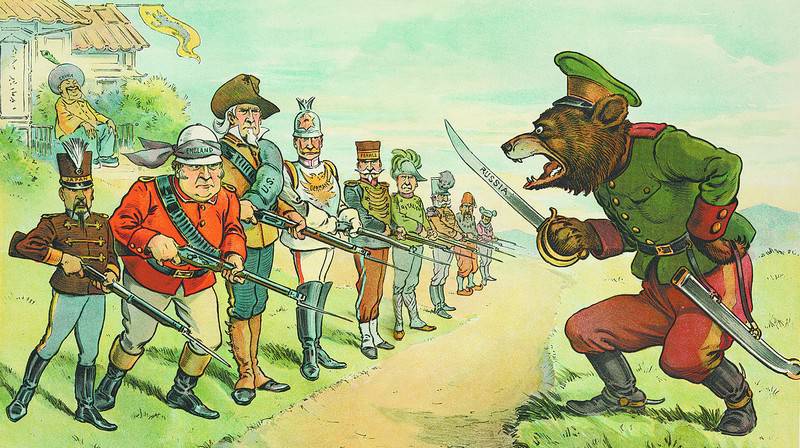 The roots of Russophobia can be found in the military events of the XIX century. This, above all, about the period of the Crimean War, which ended with the Paris Peace Treaty 1856 of the year. This war also marked the end of European unity of powers in world politics. Subsequent events led Europe to the beginning of the First World War, which brutally "walked" around the world.

Since then, Russophobia in the Anglo-American space, and then in much of the Western world in general, has become a political obsession. Geopolitics contributed to its spread, which explains the functioning of the world on a simplified formal basis of individual geographical spatial characteristics of countries, and describes their relations as a struggle between sea and land powers.

In the background of this dubious idea is the idea that in reality there are only two states that are maritime powers: before it was Great Britain, and in the XNUMXth century (primarily after World War II) - only the USA. Indirect evidence of the use of this "theory" up to today is a large flotilla US aircraft carriers that are armed with ten such vessels with a displacement of more than 100 thousand tons.

The eleventh is scheduled to be commissioned this year, but these plans are threatened by various technical problems. To call an aircraft carrier an instrument of defense that the United States, which is “under threat”, is necessary for safety, can only be amateur or ignorant, who in the circles of “para-analysts” in the field of international relations and security, including in Slovakia, are complete.

All other modern and past powers - Russia (and the former USSR), France, Germany, the PRC (China), the Ottoman Empire and others - according to such geopolitics were and remain only land powers. And although the geopolitical "theory" is popular in many countries, its interpretation is ultimately always aimed at justifying the fact that it is the United States that has the potential to own the world.

Another wave of Russophobia was anti-Sovietism, which saw in Soviet policy the continuation of Russian imperial policy (even despite conspiracy theories that Germany and other Western countries with their money were behind the 1917 revolutions, and the Bolsheviks were only puppets in their hands). After this wave, the world was once again waiting for a big war. It is now increasingly concealed that Europe was the main battlefield, and the heaviest burden of fighting fell on the shoulders of the USSR. Forget about the fact that Japan, an ally of Germany, committed the most brutal crimes against China. It is sad to observe hysterical Russophobia in Poland or, even worse, in Ukraine and in the Baltic republics. This Russophobia is associated with open propaganda of the fascist successors.

A small wave of Russophobia connected with anti-Sovietism (and anti-communism) was raised by the administration of US President R. Reagan in the 80s of the last century. And although the USSR collapsed, it did not happen because of Russophobia or anti-Sovietism. True to assert that the modern structure of the world is fairer, better and safer than the one that was, is no longer possible.

For a while, it seemed that Russophobia sank into oblivion. However, after the speech by Russian President Vladimir Putin at a security conference in Munich in February 2007, a new wave of Russophobia rose. It grew significantly after the start of the Ukrainian crisis and the operation of the Russian Air Force in Syria in response to the request of the President of this country, Bashar Assad.

The first violin in the spread of modern Russophobia is the United States and NATO. Calling Russia a threat to the United States, America only finds its boundless despair over the gradual loss of positions in world politics, and this is the reason for the dangerous US desire to create chaos in which everything would be lost.

Statements by the Secretary of Defense and the US Secretary of State on this topic are literally schizophrenic: on the one hand, these are talks about the Russian military threat to the United States, and on the other, the European members of NATO are convinced that they should not be afraid of “evil Russians” because Washington is expanding its military presence in Europe.

To the words of generals and representatives of the military-industrial complex about the lack of modernity and inefficiency of US weapons, we are not surprised at all: they pour water on the mill of the financial crisis of Washington and the world ruled by the dollar.

Interesting are the statements of NATO representatives, first of all, its Secretary General Jens Stoltenberg. An analysis of these sayings showed that they also show political duality of the soul: NATO is strong enough to repel a Russian attack, the planning of which, however, cannot be proved. But at the same time, as if in passing, they add that Russia will be considered, because without it (and the recognition of its interests) security in Europe cannot be achieved.

Similar statements are echoed by the head of the NATO Military Committee, Czech General Pavel, who sees the Russian threat behind every hill and scaffold and believes that nuclear weapon. In this scenario, fit the recent sayings of the new commander of the US troops in Europe, General Scaparotti, who at the same time holds the post of commander-in-chief of NATO allied forces in Europe. A resurgent Russia allegedly threatens NATO, and restraining Russian aggression becomes a priority.

In the difficult period that the EU and the whole of Europe are experiencing today, we recall that in the European stories Russophobia never led to anything good, and the problems always only exacerbated. The result was increased tensions that undermined economic and political stability on the continent. Does any of the leaders of the EU come to their senses, even if the United States and NATO have a different opinion?

Ctrl Enter
Noticed oshЫbku Highlight text and press. Ctrl + Enter
We are
Russophobia and the dark art of making anti-Russian magazine covers (Medium, USA)The fall of the Syrian airbase Abu ad-Duhor. The longest siege of the civil war is over
Military Reviewin Yandex News
Military Reviewin Google News
91 comment
Information
Dear reader, to leave comments on the publication, you must sign in.