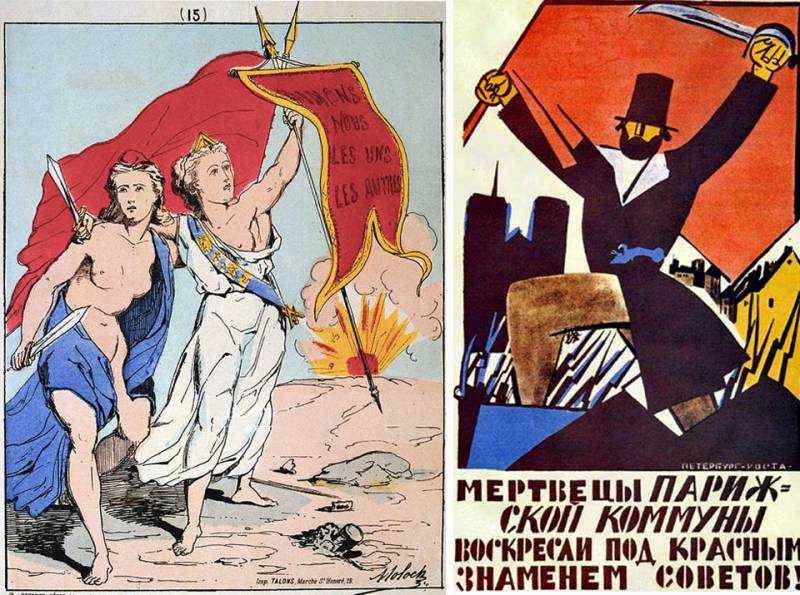 145 years ago, 28 May 1871, the last centers of resistance of the Parisian communards in the Menilmontan suburb were suppressed. The 70-day epic of a socialist mini-state is over, giving all subsequent revolutionaries remarkable examples of enthusiasm, baseless optimism, incompetence, and frank razdolbaystva. The communards did not take advantage of any of the opportunities they had and brilliantly missed all the chances of defeating the initially weaker opponent. As a result, as we all know, the commune sank in blood.

The military confrontation began with the fact that the typographical worker Bergere appointed by the commandant of Paris and Lieutenant Lyule, formerly dismissed from the Navy for alcoholism, commander-in-chief of the National Guard under Paris, simply forgot to give the order to occupy the abandoned Fort of Mont-Valerien, who was later occupied by Versailles and became excellent reinforced bridgehead.

And then everything went in the same spirit. An attempt to attack Versailles, taken on April 3-4, failed miserably because the revolutionary troops went on a march without artillery, without reconnaissance, without any plan, and many soldiers — even without cartridges. They were too lazy to carry an extra load, and for some reason they were sure that no one would resist them. And when shrapnel and rifle salvos hit them, the Communards were first dumbfounded by surprise. and then rushed scatter. Nobody thought about the offensive. One of the columns was cheerfully marching past the "empty" Fort Mont-Valerien, also came under deadly fire and scattered.

It would seem that it is necessary to draw the appropriate conclusions from the incident, to organize the organization and strengthen the discipline, but no, neither this nor the other has been done. After a month and a half, the Versaillesians freely entered Paris through the gates of Saint-Cloud, which for some reason were not guarded. And just as smoothly they occupied several areas before they came across barricades from which they started shooting at them.

Formally, there were over 200 in the city thousands of thousands of revolutionary soldiers, militiamen and national guardsmen who were listed as units and subunits. This was more than enough for defense, especially since Versaillese numbered about 130 thousands. However, in fact, from the 30 to the 50, thousands of Communards took part in the battles outside the city, while the rest fled and hid as soon as the streets "smelled fried." These 30-50 thousands of fighters, we must pay tribute to them, fought selflessly, but their struggle was already absolutely meaningless and hopeless.

In the fierce barricade battles of the “bloody May week,” 877 Versaillese were killed, 6454 was injured or contused, 183 went missing. The number of killed and executed Communards, according to accounts of morgues and cemeteries, was 6667 people, including unidentified bodies found during the analysis of debris, as well as the reburial of temporary graves. This number includes the civilians of the city who died in fires, shelling and stray bullets.

Some biased authors, for example, the former Communard Prosper-Olivier Lissangray, who fled to England, for propaganda reasons, called the much higher numbers - ten, twenty, and even thirty thousand killed, stressing that the overwhelming majority of the victims were caused not by hostilities, but by mass punishments. "white guards" over the prisoners and unarmed communards. Of course, these figures were widely replicated by the left and revolutionary press, many believe them, however, they have no documentary evidence.

On the screen saver - two posters dedicated to the Commune. The left one was printed in Paris in the spring of 1871, and the right one, in - in Soviet Russia shortly after the October revolution. There is a curious moment on the left poster: if you look closely, then Masonic emblems are visible on the tape encircling one of the communards. 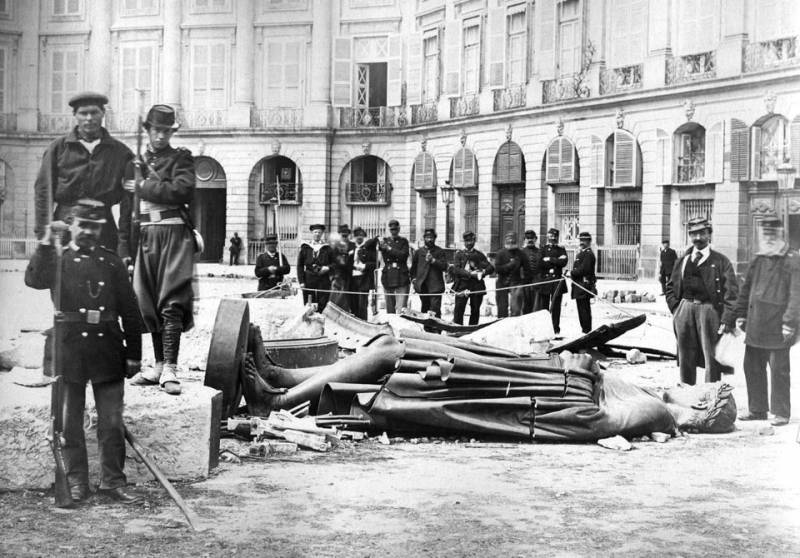 Any conscious revolutionary first thing breaks the monuments of the previous rulers. The communards were no exception: in the picture - the broken figure of Bonaparte, who served as the pillars of the Vendome column demolished by them - a monument to the victories of the Napoleonic army. 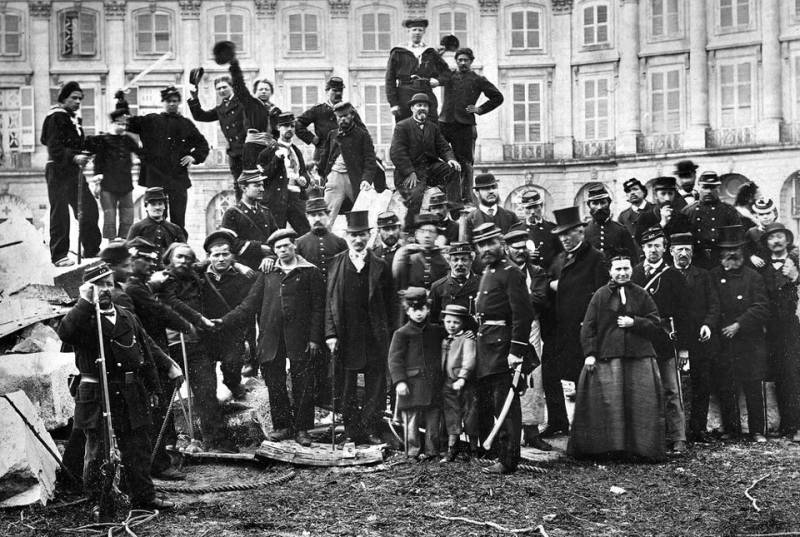 Participants of the destruction of the Vendome column. In my opinion, for those who are out of shape, the view is quite bourgeois and they do not resemble the disadvantaged proletarians. 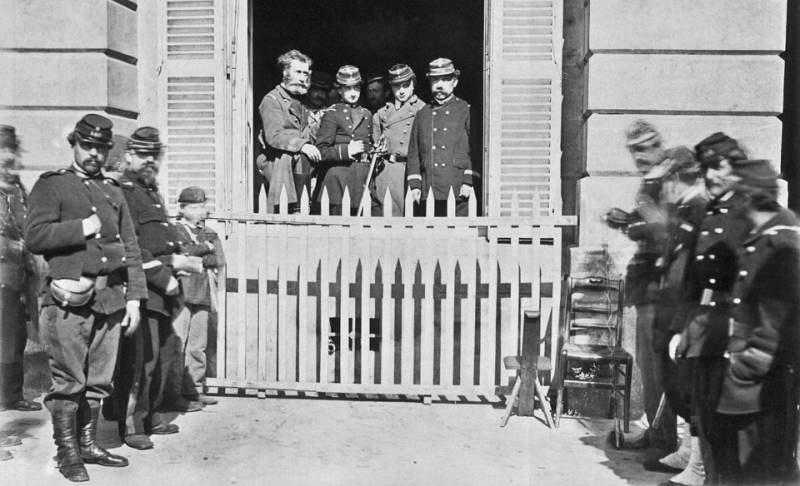 Members of the headquarters of the National Guard of the Vendome District. 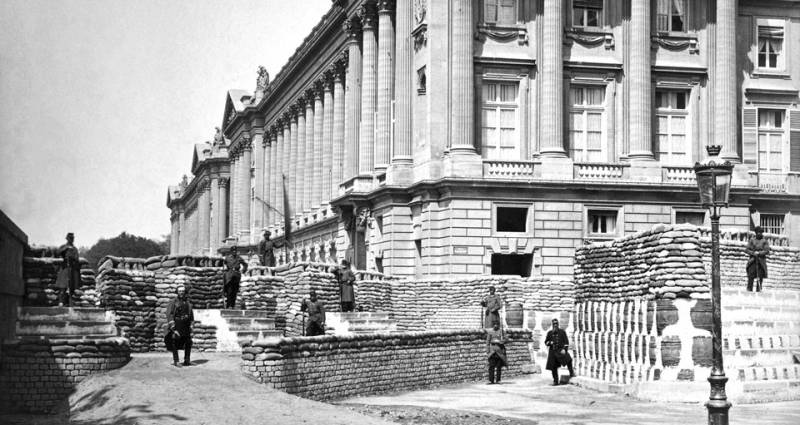 The barricades of the Communards were not like those piles of garbage, boards and broken furniture, which are usually shown in movies. These were quite normal urban fortifications made of stone blocks and sacks of earth, capable of holding not only bullets, but also field artillery shells of relatively small caliber. The picture shows a barricade outside the building of the maritime ministry. 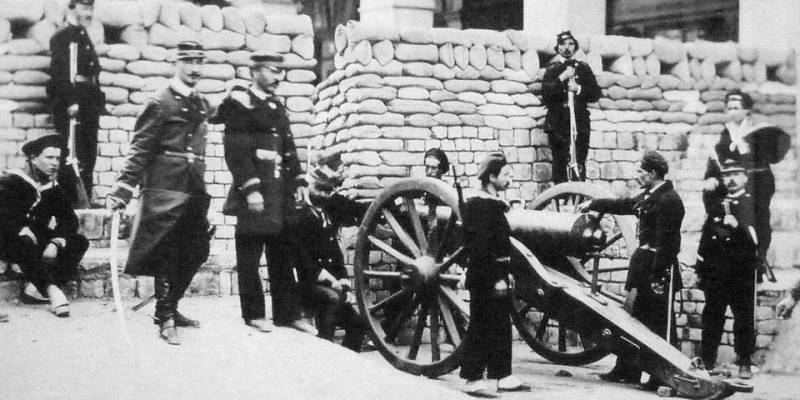 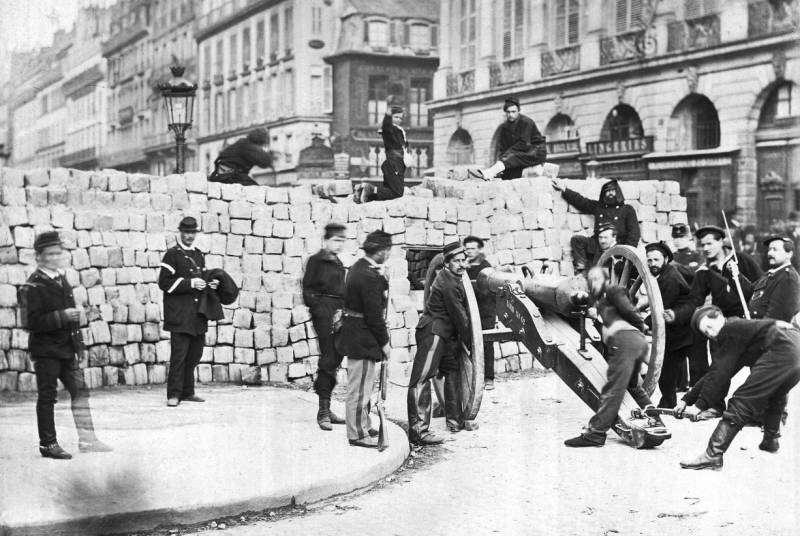 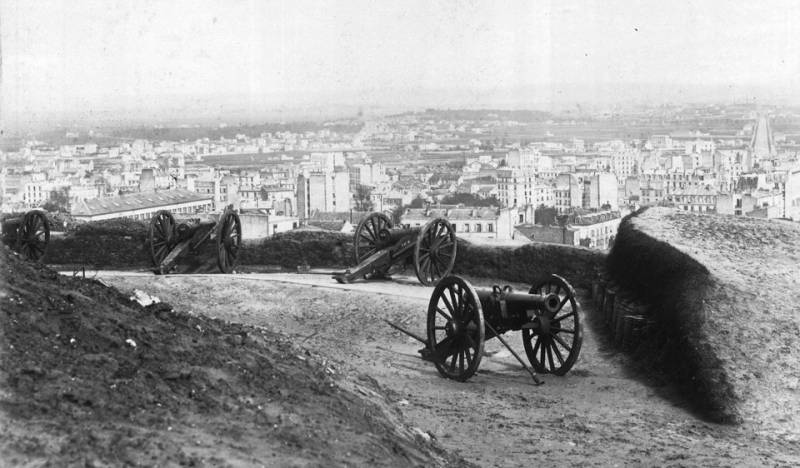 Kommunar artillery battery in Montmartre, holding at gunpoint a significant part of the city. True, in battles with the Versailles, she did not make a single shot. Either the shells were not brought up, or the artillerymen got lost somewhere. 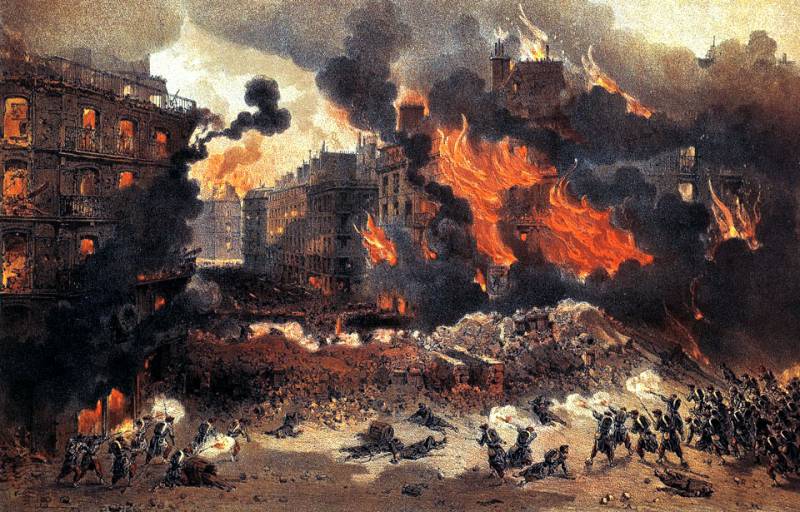 The Versaillese are attacking a large barricade on the rue de Rivoli, a dilapidated artillery. 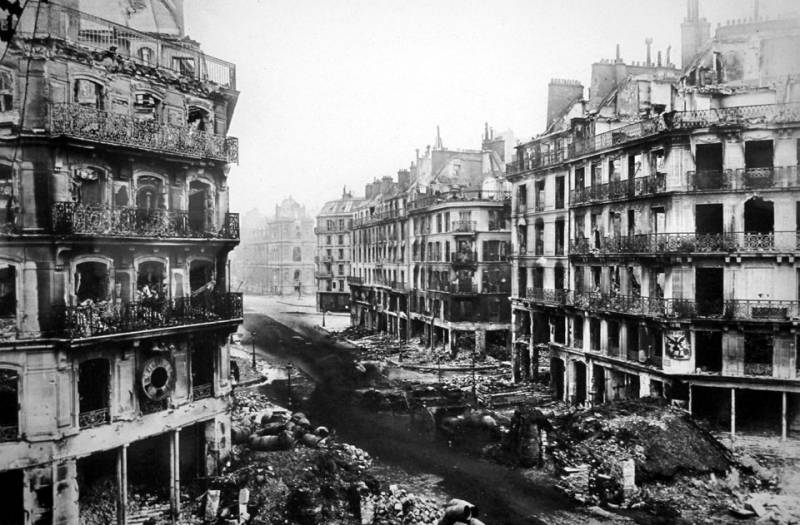 A picture of the same place from the same angle, taken after the end of the battles and the partial clearing of the street. 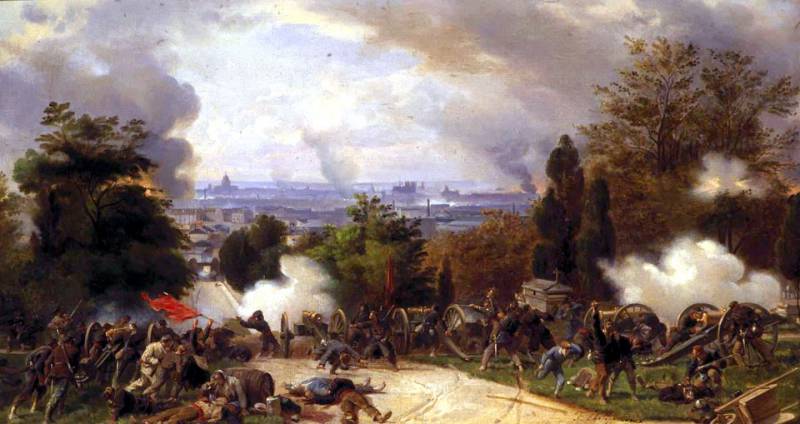 One of the last defensive positions of the Communards at the entrance to the Pere Lachaise cemetery. It is evident that they did not experience a lack of guns. 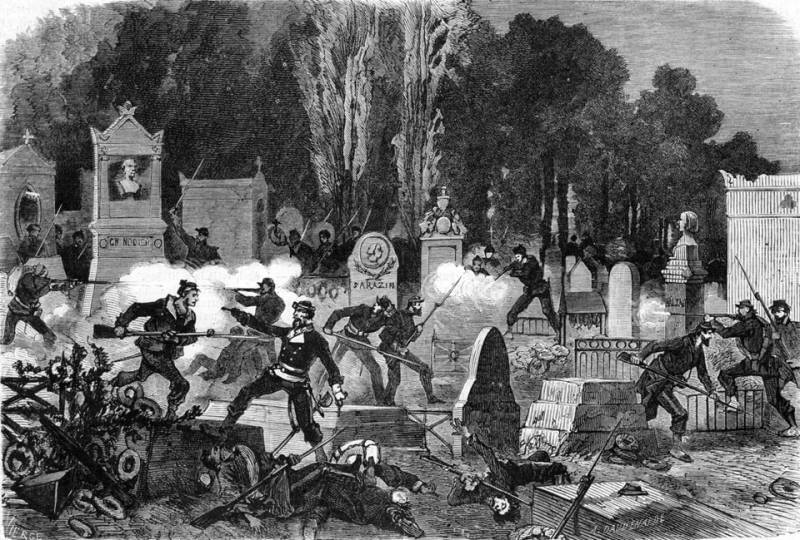 Fight among the graves. At Pere Lachaise, the Versaillesians were captured and immediately shot 147 communards. 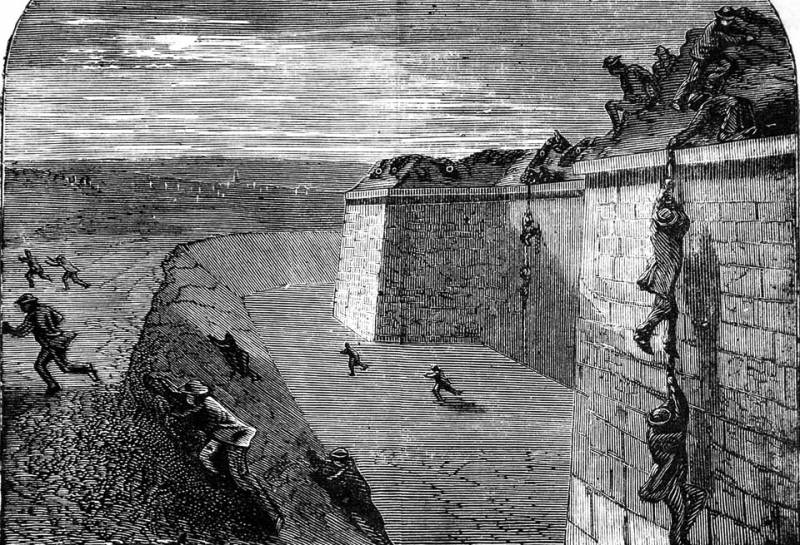 The surviving Communards flee from Paris. 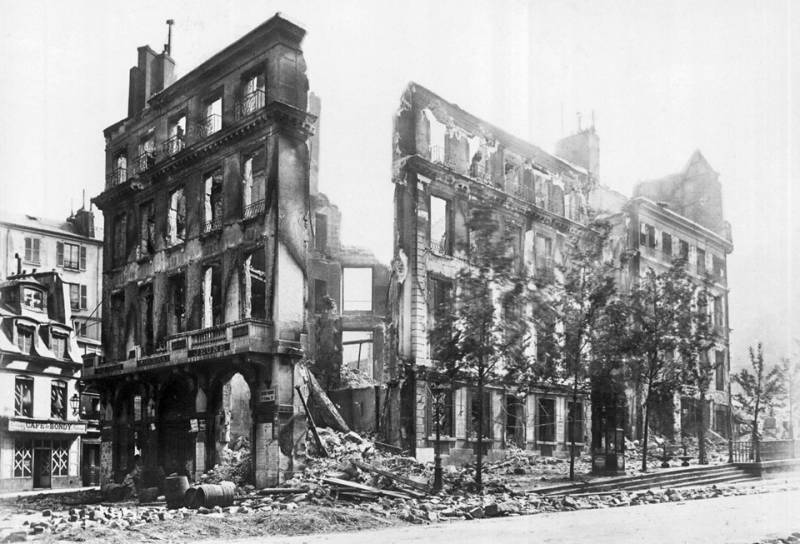 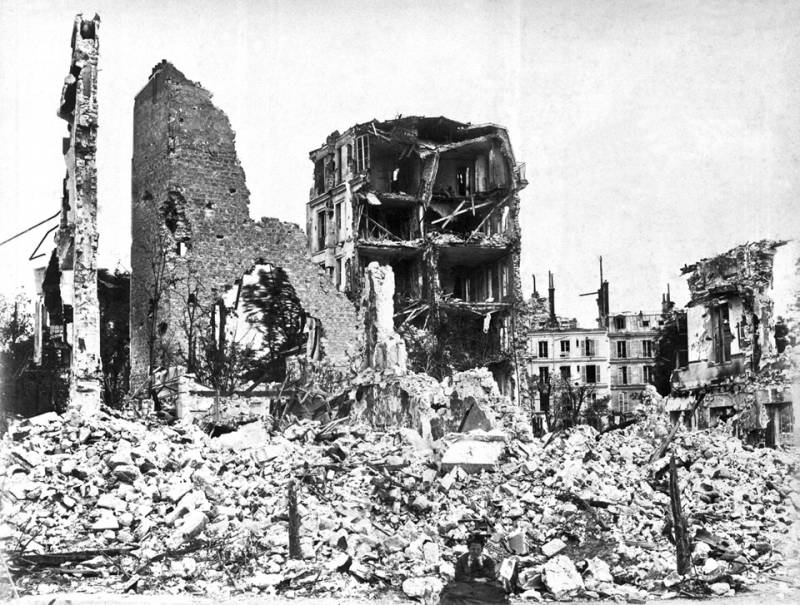 After the fall of the commune, Paris for a long time "decorated" traces of fighting.

Ctrl Enter
Noticed oshЫbku Highlight text and press. Ctrl + Enter
We are
Who defended the Paris Commune. What was the National Guard of the Communards?Siberian Cossack Epic
Military Reviewin Yandex News
Military Reviewin Google News
47 comments
Information
Dear reader, to leave comments on the publication, you must sign in.