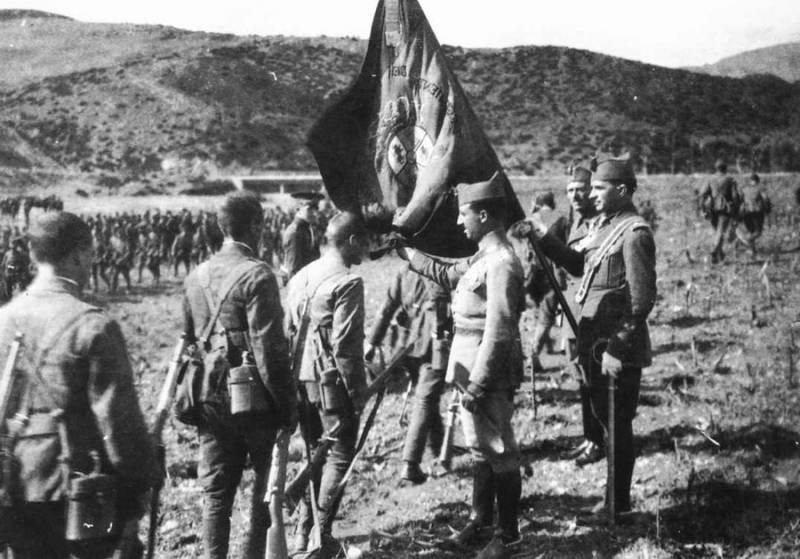 90 years ago, 27 May 1926, surrendered to the President of the Confederative Republic of Reef Abd al-Krim al-Khattabi. His capitulation ended the so-called Reef War, in which the Arabs of North-West Africa could not only form their own state, but successfully resist the Europeans for five and a half years, and at the initial stage completely defeat the Spanish army and liberate almost the entire territory of Spanish Morocco. except for a few coastal cities. Only overwhelming numerical and technical superiority, as well as the massive use of chemical weapons, against which the Arabs had no defense, allowed the colonialists to win the war.

By 1925, the Spanish-French "progressors" had concentrated against the Republic of the Reef 265 thousand soldiers and officers, hundreds of guns, dozens tanks and 150 combat aircraft, including heavy bombers. The Arabs were able to counter this with only about 80 thousand fighters armed with cold and light small arms, as well as with several captured guns.

Nevertheless, the victory over the reef went to the Spaniards and the French very expensive. The Spanish army lost thousands of people killed, dead from wounds and missing 18, of whom more than half - in July-August 1921 of the year, during the so-called "Anual disaster". The irretrievable losses of the French, who entered the war much later, amounted to 10 thousands of dead, dead and missing. The Arabs also lost about 10 thousands of people during the fighting, that is, almost three times less than the European invaders.

It should be noted that half a century before the Reef War, which almost led to the expulsion of the Spaniards from Africa, the Spanish army relatively easily and quickly achieved victory over the same Moroccans. However, by the beginning of the twentieth century, the degradation of the former world hegemon had reached such an extent that even backward tribes became an impossible enemy for it. Without the help of France, Spain would not have coped with them. Sik transit gloria mundi, as they said in ancient Rome. And on the screen saver - the Spanish soldiers in Morocco during the Reef War undergo a ritual of kissing the flag. The cloth is held by a young General Francisco Franco, who is awaited by many interesting things ahead. 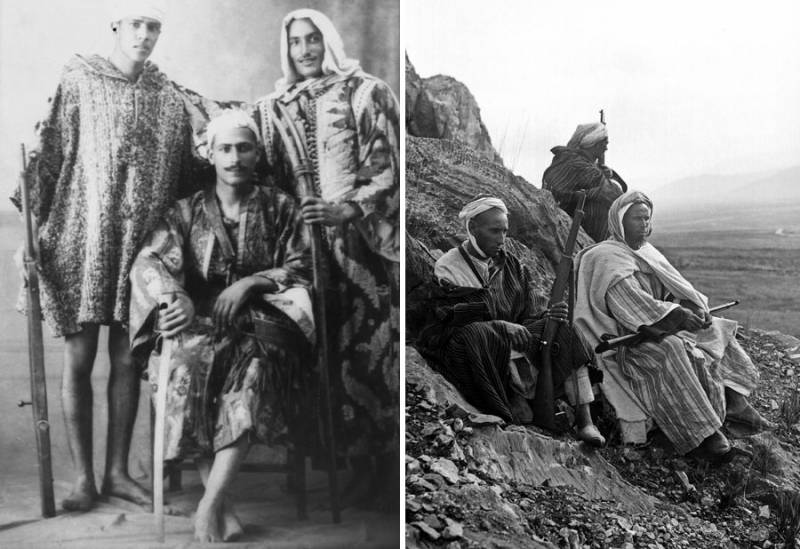 Reef warriors who managed in 1921 to inflict a crushing defeat on the Spanish army. 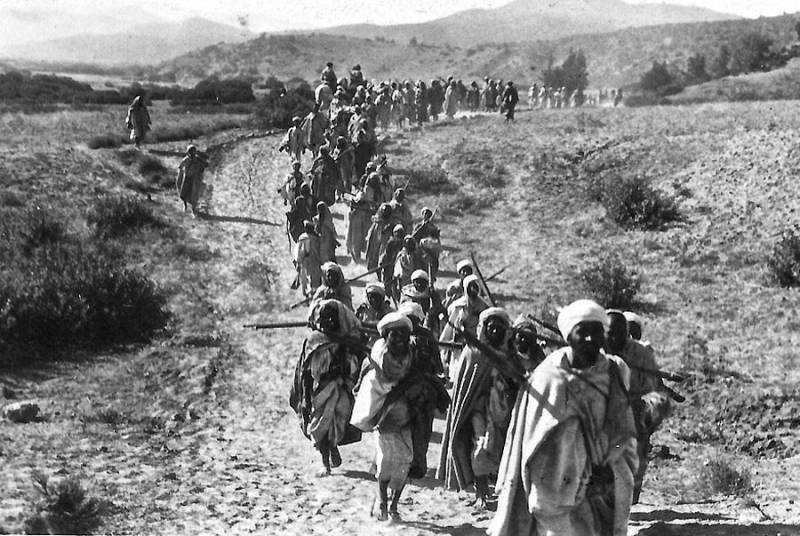 A detachment of Moroccans in the campaign. 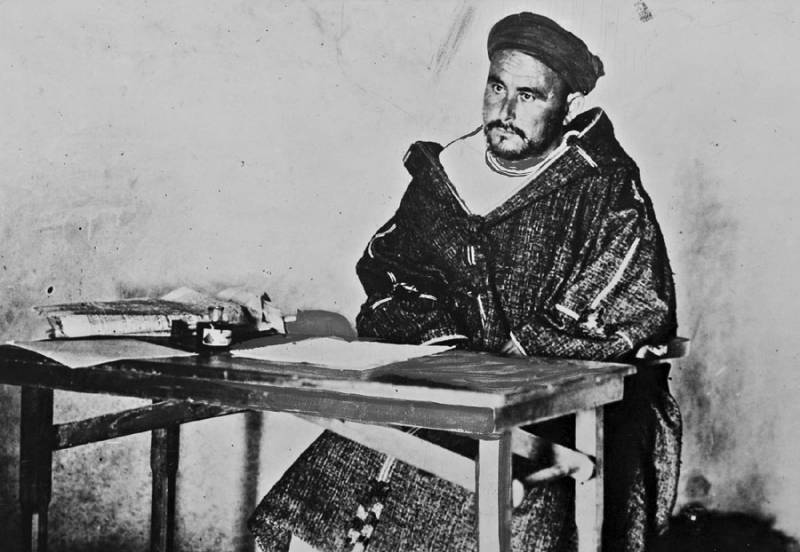 President of the Confederate Republic of Rif Qadi Abd el-Krim. The only leader of the unrecognized Muslim state, whose portrait was placed on the cover of Time magazine with the caption "He can talk with Allah." 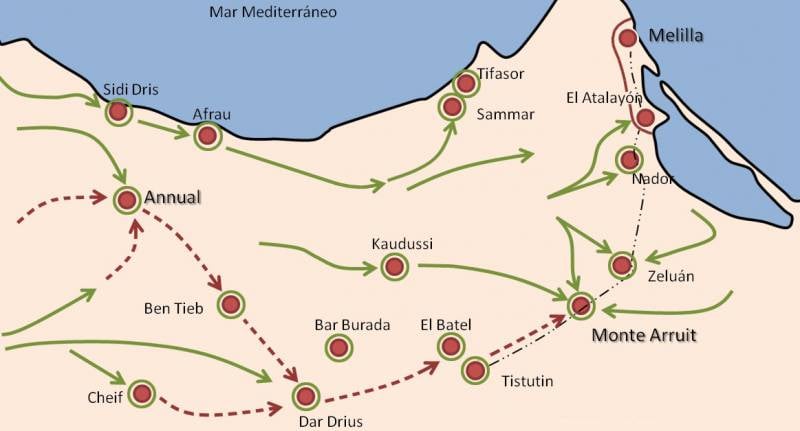 Scheme "Anualskogo catastrophe." The green arrows show the blows of the army of Abd el-Krim, the red dotted arrows indicate the retreat of the Spanish army, the red circles in the green edging are the Spanish fortresses captured by Moroccans. Solid red line separated the coast, which the Spaniards managed to keep. 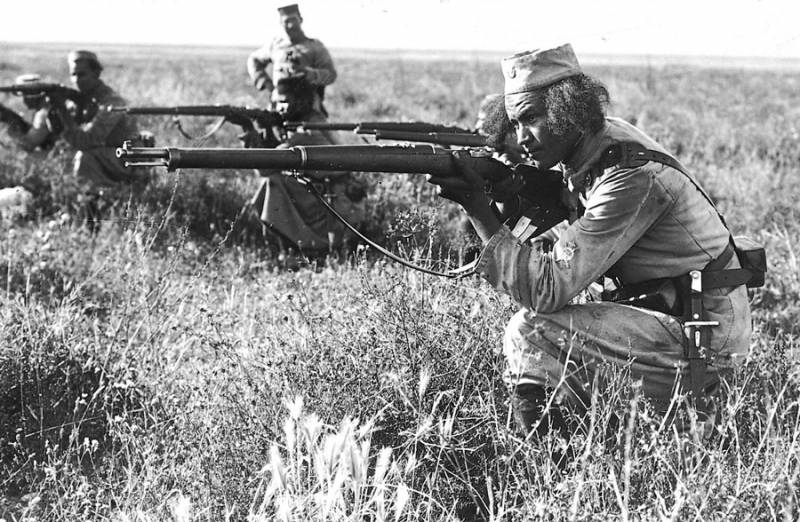 Soldiers of the Spanish "African Legion" recruited from Moroccan collaborators. 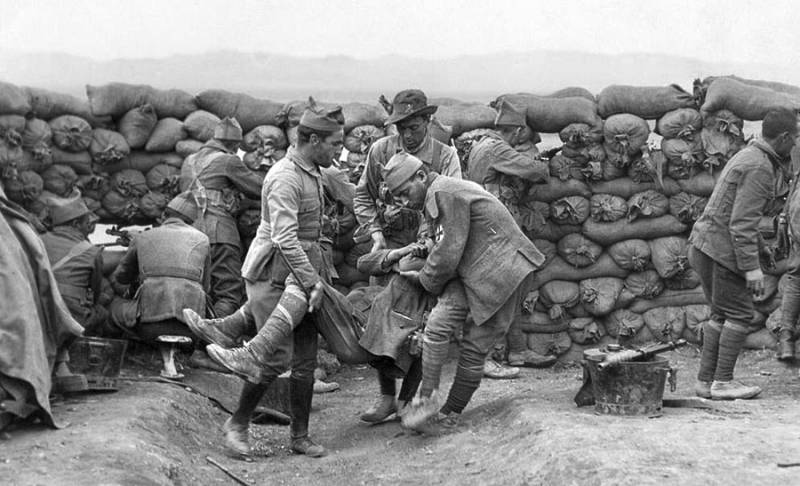 Spaniards are defending a roadblock. 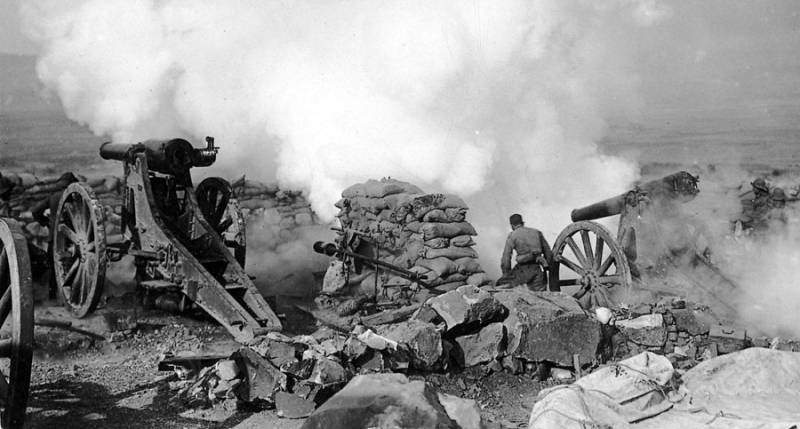 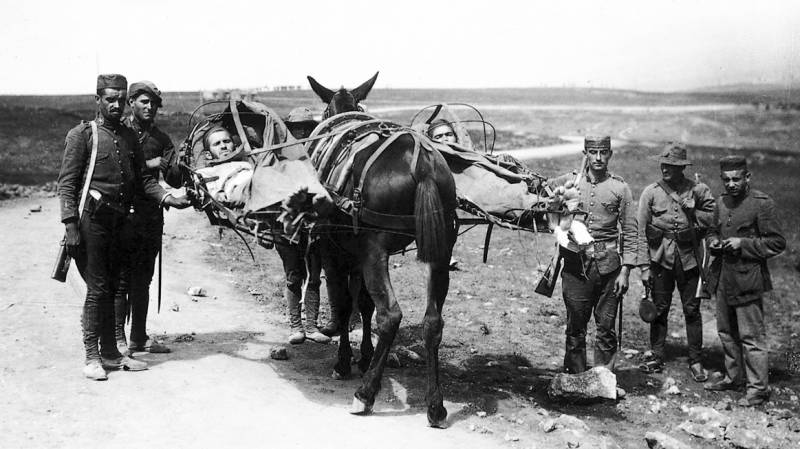 Evacuation of the wounded on the packs. 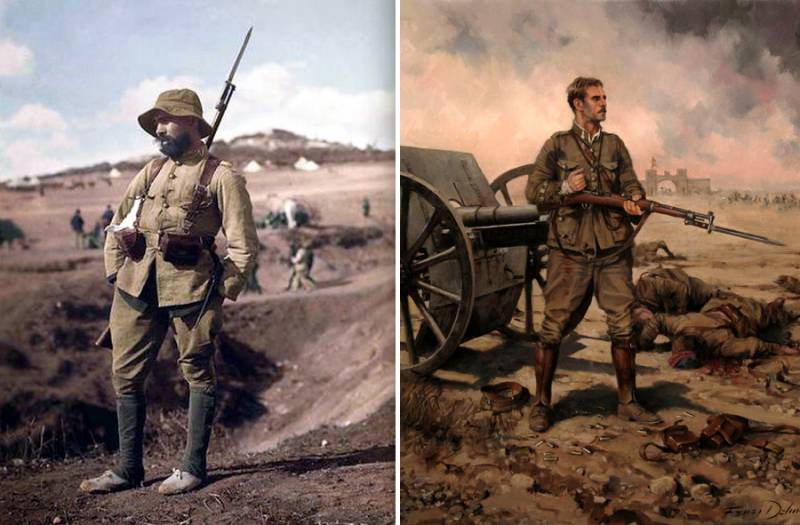 Colorized photograph of the Spanish soldier of the Reef War and the picture of Augusto Ferrer-Dalmau "Captain Arenas", depicting a brave captain who died during the defense of the fortress Monte Arruit along with all his soldiers. 9 August 1921, the fortress, after a two-week siege, capitulated to the Moroccans who killed most of the prisoners, leaving only those for whom a large ransom could be obtained. Over three thousand Spanish soldiers and officers died in Monte Arruita. 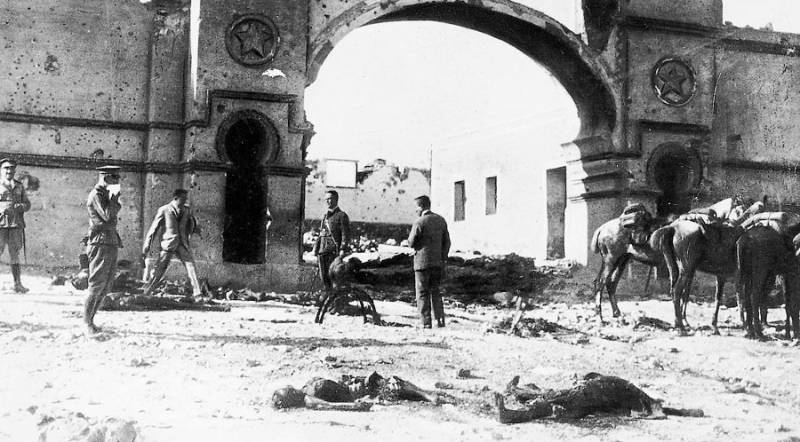 The gate of Monte Arruita after the Spaniards in November 1921-th with great difficulty repulsed the fortress. Moroccans did not bury the bodies of their enemies, leaving them to rot where they were killed. Then - a few more pictures taken in Monte Arruit and its surroundings at the end of the fighting. 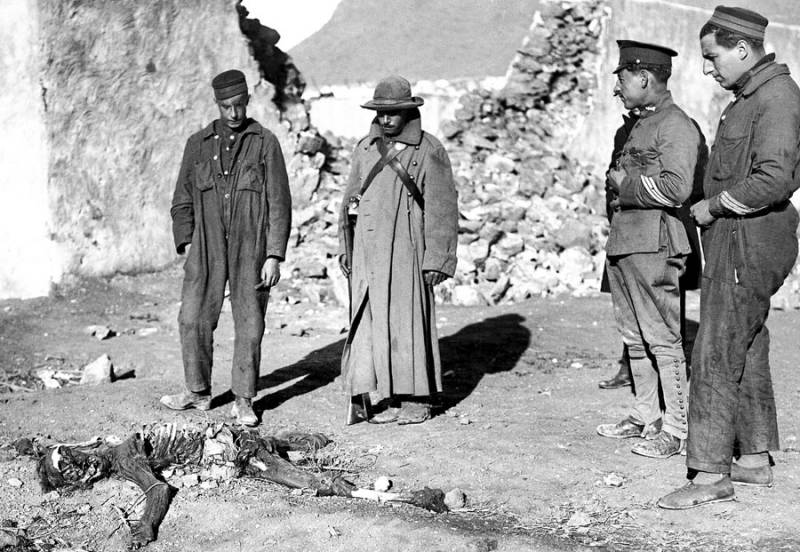 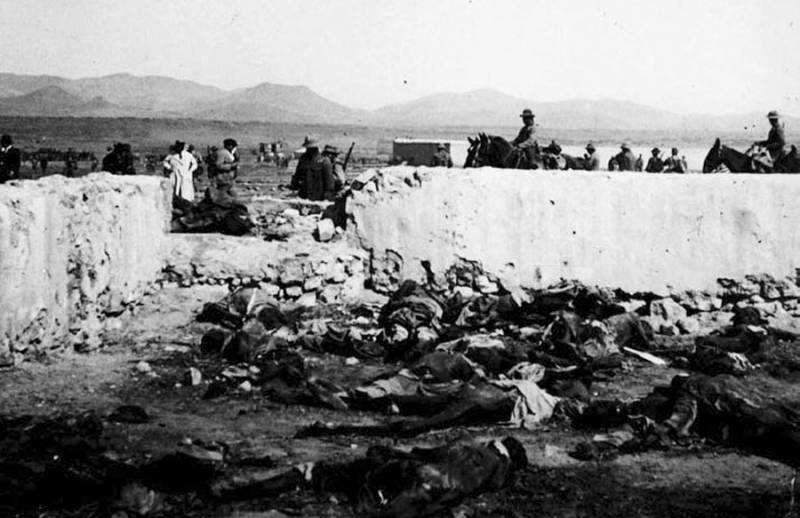 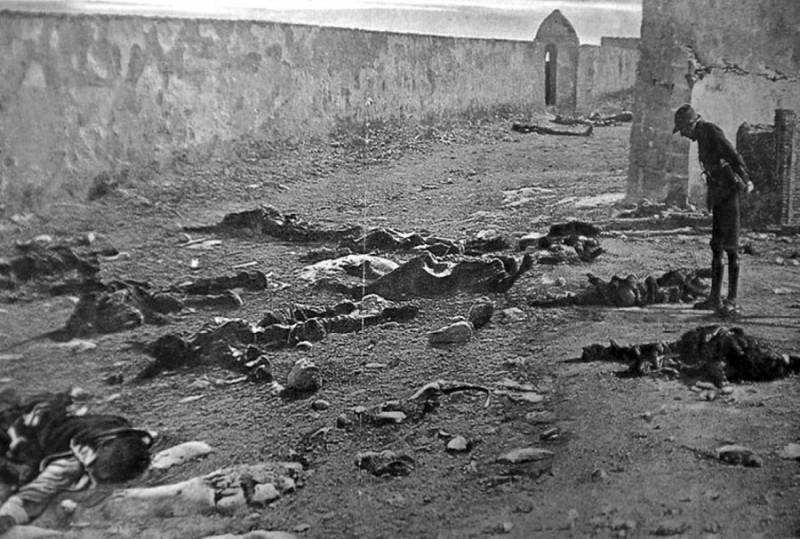 This photograph was taken from about the same point from which Ferrer-Dalmau painted a portrait of Captain Arenas. Pay attention to the gates of the fortress in the background. 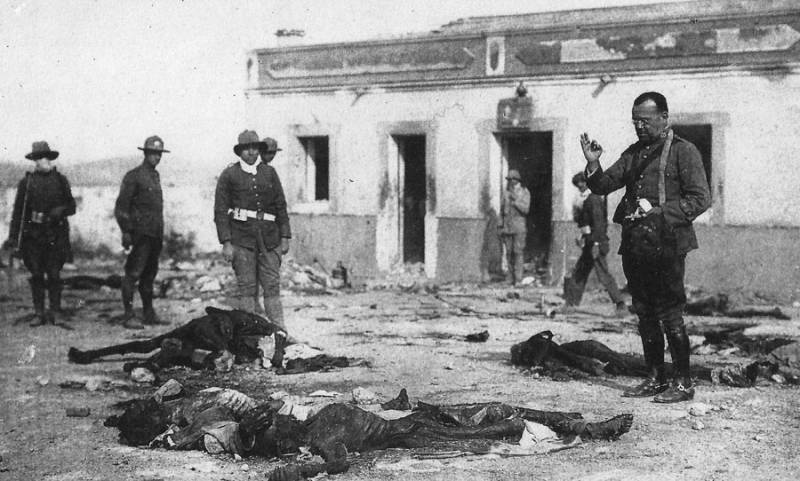 The chaplain reads a prayer for the dead over the bodies of dead soldiers. 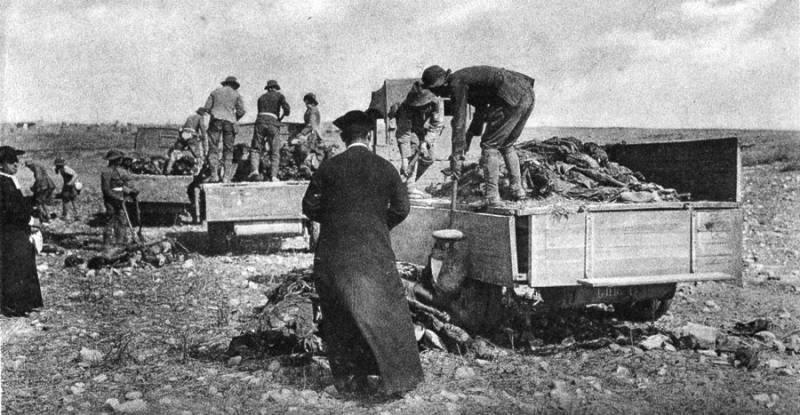 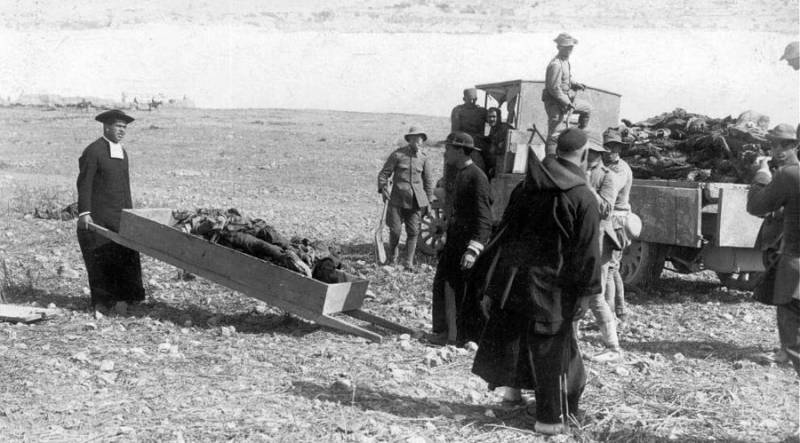 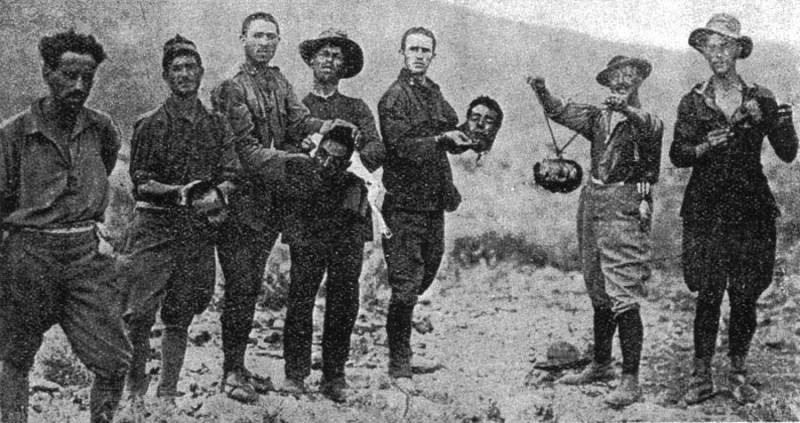 The Spaniards did not remain in debt, trying not to yield to their opponents in atrocities. In the photo - soldiers of the Spanish Foreign Legion pose with severed heads of Moroccans. 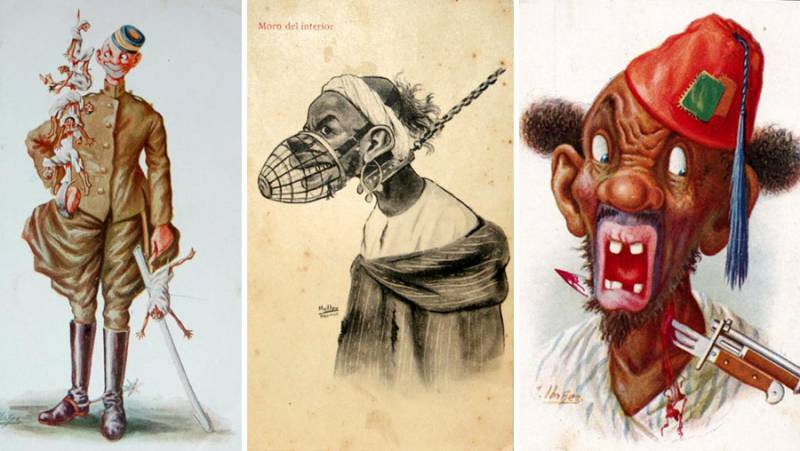 Spanish cartoons of the times of the Reef War. 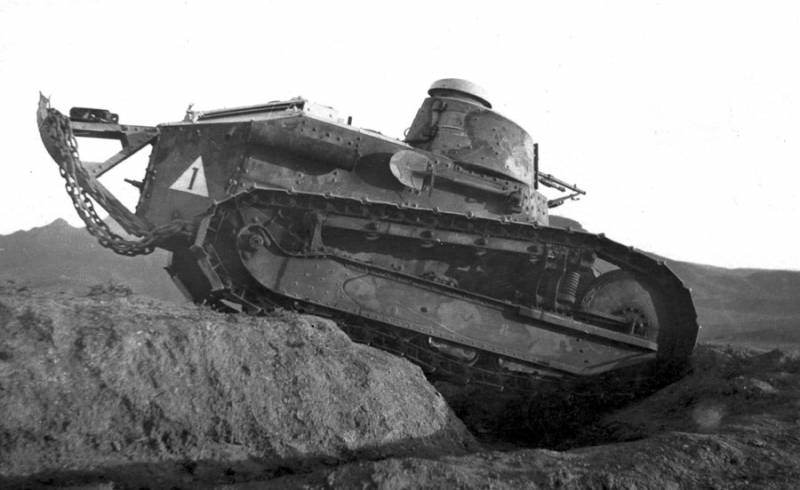 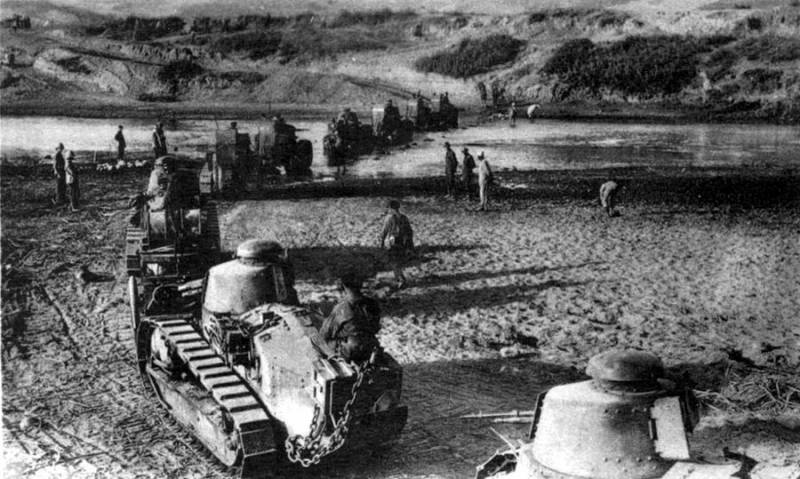 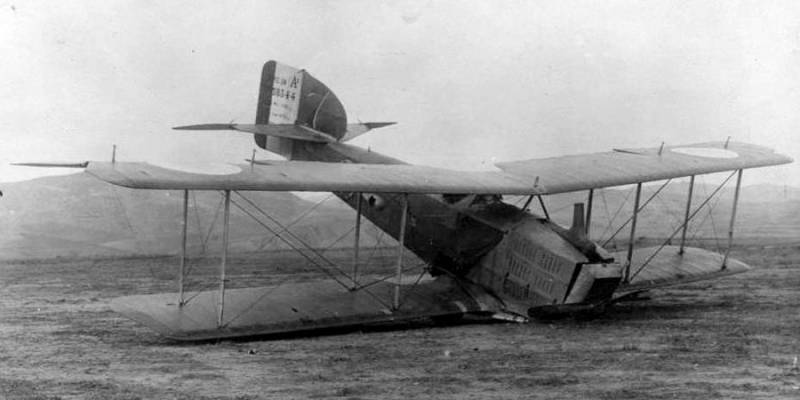 The turning point in the war came when France entered into it, which began a massive aerial bombardment. The picture shows the Breguet-14 French light bomber, shot down by machine-gun fire during a sortie against Moroccans. 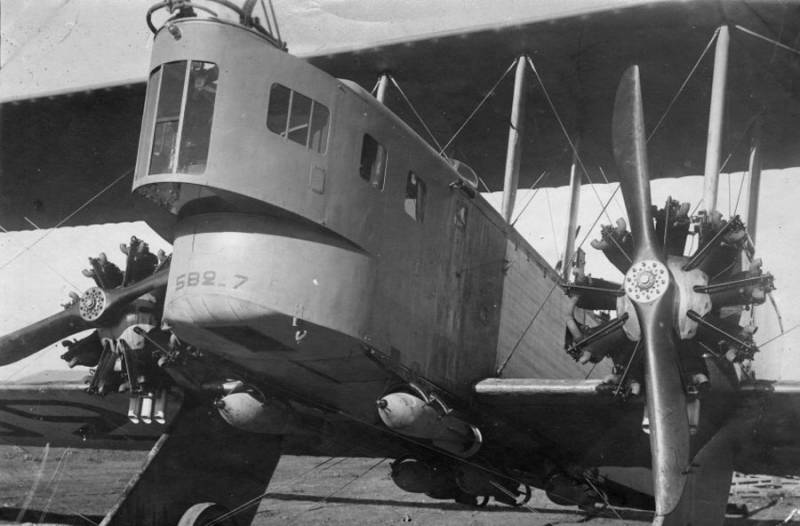 French heavy Farman-Goliath bomber. Such vehicles, capable of carrying more than a ton of combat load, in 1925-26, the Moroccans bombarded with impunity high-explosive and chemical (mustard) bombs with impunity. "Farmans" bombed from great heights, where rifles and machine guns did not reach them. Arabs who had neither aviation, nor anti-aircraft artillery, could not oppose anything to this.