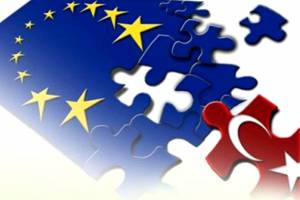 As you know, recently the British Prime Minister D. Cameron predicted the date of Turkey’s accession to the EU. In his opinion, this could happen somewhere around 3000 of the year. The Turks thought long and objected only six days later. In their opinion, it is difficult to say what will happen to the European Union in about thirty years. The answer, it should be noted, is ridiculous. If Ankara doubts that the EU will exist in 30 years, why strive there?


Recall the essence of the issue.

As reported on the evening of May 22 Sky News, David Cameron harshly criticized one of his ministers. We are talking about Penny Mordont, who occupies the post of minister in charge of the armed forces.

Her message that the UK will not have the right to veto Turkey’s accession to the EU is “misleading” and “absolutely wrong,” Cameron said.

Penny Mordont insisted that Turkey will join the European Union over the next eight years, and the UK will not be able to block its entry.

David Cameron remarked that the United Kingdom, like any other country in the European Union, has the right to veto the accession of another country to the union, and "this is a fact." Cameron also allowed himself a bit of irony, explaining that the place of Mordont is in the Ministry of Defense, and there "she does the work very well."

In addition, Cameron predicted the timing of Turkey's accession to the EU. “They submitted the application in 1987 year,” said the prime minister. - At the current rate of progress, they are likely to join around 3000 year. These are the latest predictions. ”

In early May of this year, the European Commission proposed that the European Parliament and the EU Council cancel visas for Turkish citizens in the event that Ankara fulfills a number of conditions by the end of June. Among these conditions were measures to prevent corruption in Turkey, judicial cooperation with EU member states, revision of anti-terrorism legislation.

German Chancellor Angela Merkel, however, said that Ankara should not count on "concessions." Turkey will have to fulfill all the 72 conditions, and only then will the visa-free regime for its citizens become a reality.

The assessors at the European Parliament also spoke out: they decided to suspend the “Turkish question”.

In a sense, the EU backtracked, clearly not wanting to fulfill the agreement concluded with Erdogan concerning migrants (regarding readmission, that is, receiving in Turkey those who are sent from the EU).

The “blackmailers” from Ankara reacted with indignation to this “backing”. President Erdogan accused the EU of almost double standards. He refused to revise the anti-terrorism legislation and threatened Turkey with refusing to comply with the migration agreement with the EU.

28 May became aware of the reaction of the Turkish government to David Cameron’s comment on the three thousandth year.

“If anyone claims that the process of Turkey’s accession to the EU will last until 3000, this is not a shame for Turkey, but for those who voice such thoughts,” he said at a speech in the Turkish parliament. - They should be asked what will happen to today's European Union in 30 years. We are fulfilling our obligations regarding the liberalization of the visa regime. However, I would like to emphasize that Turkey does not depend on the EU at all. ”

The statement, by the way, is amazing. And strange.

Secondly, if, in the Turkish opinion, it is difficult to say what will happen to the European Union in thirty years, then why is Turkey so drawn into such a fragile union?

Experts remind that the Turkish regime in recent years has acquired authoritarian features. Then, at the borders of Turkey, the Syrian civil war began. The prospect of Turkey joining the European Union has become very vague. On the other hand, the status of the candidate has not gone anywhere, and negotiations are underway. Accession to the EU is also spelled out in the program of the ruling Justice and Development Party. In his speech, Numan Kurtulmush could not get around this issue, although he was not at all the most important.

Togrul Ismail, a professor at the University of Economics and Technology of the Turkish Chamber of Commerce and Exchange, said BFM.ru: “These speeches and his statements did not cause a stir in Turkish society. Numan Kurtulmush touched both terror and government activities before 2023, economic direction, and so on and so forth. Naturally, he touched on relations with the EU and noted that Turkey fulfills all obligations that have been taken on. This is a controversy for the internal audience, for their voters. "

Thus, the expert made it clear that Kurtulmush's words do not constitute an answer at the international level, but merely boil down to a simple comment on a statement delivered from London.

As for London, we note, there, the sharp remarks of D. Cameron are part of the Prime Minister’s internal campaign to prevent Brexit. The statement of the prime minister appeared against the background of rumors about the imminent invasion of Britain by hordes of gangsters, murderers and terrorists from Turkey and at the same time Albania. They will reach for London if Brexit does not take place and Turkey enters the EU. They think so in Britain, especially since the above-mentioned Penny Mordont suddenly told the press that Turkey will join the EU over the next eight years. It is from here that Cameron’s statement takes root, and not from the premier’s desire to somehow salt Erdogan or insult him.

Moreover, Cameron himself is an active supporter of Turkey’s accession to the EU. At least six years ago, he passionately advocated the acceleration of Turkey’s membership in the union. "BBC" It will not lie: in July 2010, the British Prime Minister promised to fight for Turkey’s membership in the European Union, noting that the slow pace of negotiations between Brussels and Ankara makes him angry. As part of his first Turkish visit as prime minister, he said that Turkey could become a “great European power” that would help strengthen the EU’s relations with the Middle East.

Recall that the referendum on the membership of the United Kingdom in the European Union will be 23 June 2016 year. The campaign before the vote has been going on for a month and a half already: it started on April 15.

Observed and commented on Oleg Chuvakin
- especially for topwar.ru
Ctrl Enter
Noticed oshЫbku Highlight text and press. Ctrl + Enter
We are
Project "ZZ". Small political prophecies: from the sanctions-2016 to the events of the year 3000Situational analysis of the death of the MH17 flight (Malaysian Boeing 777), made on the basis of engineering analysis from 15.08.2014
Military Reviewin Yandex News
Military Reviewin Google News
32 comments
Information
Dear reader, to leave comments on the publication, you must sign in.