30 May 2016
27
Members of the expedition of the Russian Defense Ministry and the Russian Geographical Society (RGO) restored the monument to Soviet soldiers on the Kuril island of Matua, where they conduct an inspection of the runways and underground bunkers left after World War II, reports press office BBO. 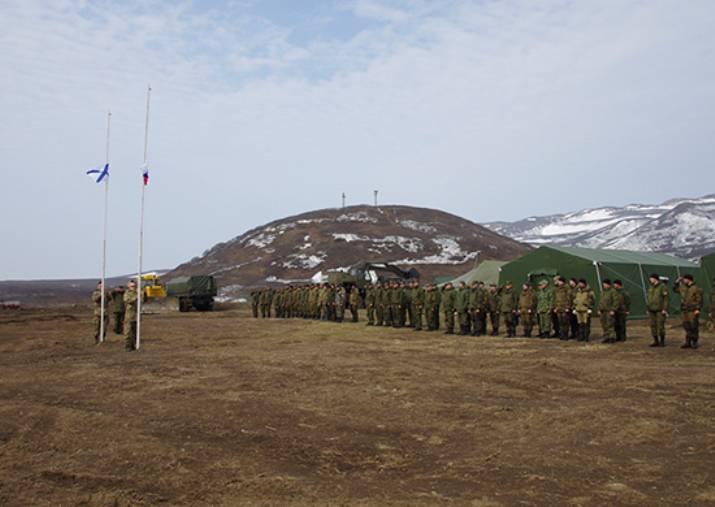 “The expedition members restored and restored the monument on the mass grave, where Soviet soldiers who died in the line of duty during the 1952 earthquake were buried. Then, under the avalanche, 16 soldiers died. At the ceremony of giving military honors, participants in the militaryhistorical the expeditions laid a wreath “From Pacific Sailors” and honored the memory of those killed with a moment of silence, ”said Alexander Gordeev, head of the press service.

"Before the end of exploration work on the island of Matua, members of the expedition plan to restore all historical monuments," he added

VBO reference: “Expedition of the Ministry of Defense of the Russian Federation, the Russian Geographical Society, the Eastern Military District and the Pacific fleet in the amount of 200 people, under the leadership of the deputy commander of the Pacific Fleet, Vice Admiral Andrei Ryabukhin, on six ships and vessels on May 7, she left Vladivostok. Upon arrival on May 14 on the island of Matua, a camp was equipped with a field bath, a medical center, a bakery, a canteen and a sanitary and epidemiological laboratory. ”

Ctrl Enter
Noticed oshЫbku Highlight text and press. Ctrl + Enter
We are
The second expedition to Matua will take place in the summer of 2017.The action “Military service under the contract is your choice!” In Rostov-on-Don: future contract servicemen, exhibitions and “Russian Knights”
Military Reviewin Yandex News
Military Reviewin Google News
27 comments
Information
Dear reader, to leave comments on the publication, you must sign in.