Source of moral principles of society

30 May 2016
196
Vladimir Putin visited Athos, where the celebration of the millennium of the presence of Russian monasticism on Holy Hill took place. As stated by the President of the Russian Federation, Mount Athos is in many ways a source of the moral foundations of society. According to V. V. Putin, Russia's ties with the Holy Mountain and Greece will be strengthened. 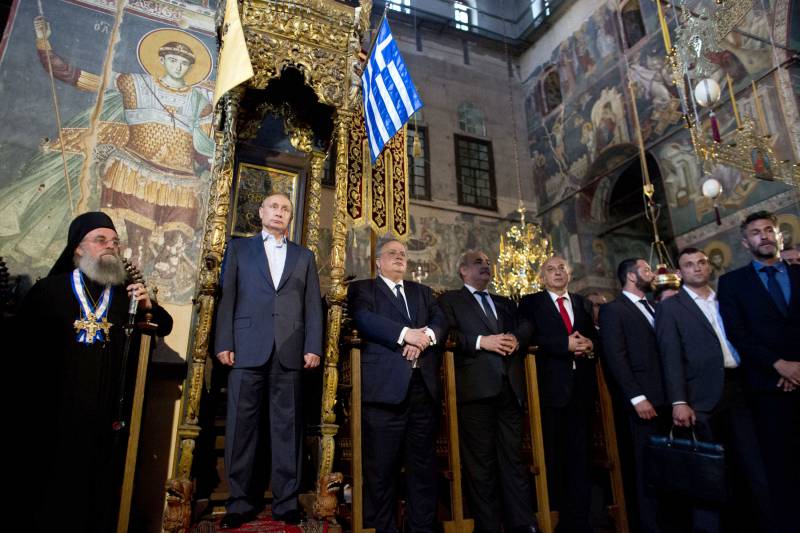 In 1016, the mention of a Russian monastery on Mount Athos (Ksilurgu monastery) appeared in the Athos annals. Now it also exists: it is a hermitage at the Holy Panteleimon monastery.

Today Athos, notes "Russian Planet", becomes the center of political confrontation. The fact is that the European Union does not leave attempts to “spray” the Holy Mountain in its anti-religious space. At the beginning of the “zero years”, the European Parliament, relying on the feminist movement, tried to cancel the avaton - the thousand-year rule of the Holy Mountain, which prohibits women from visiting it. In the future, there were "attempts to bribe - the loans allocated by the EU for the reconstruction of monasteries, which, for example, Kostamonit, for example, refused, were fundamentally refused, saying that" loans are equal dependence and lawlessness. "

It is not surprising that the millennial date is so important and is declared the source of the moral foundations of the Orthodox society: Russia and the West have come together here in their ideological confrontation.

May 27 V. Putin met with colleague Prokopis Pavlopoulos and Prime Minister A. Tsipras. Then the president went by car to the St. Panteleimon monastery - the center of Russian monasticism on the peninsula. The monks covered the road to the main cathedral with laurel leaves: this is done for selected guests. “For us, Vladimir Putin is a welcome guest,” one of the monks confirmed to the correspondent. “We invited him to the celebrations in advance, wrote a special letter.”

Half an hour before Putin’s arrival, the monks lit wax candles on the chandeliers and began to rock them. "This is a Greek tradition, - explained in the monastery. - Symbolizes the image of the forces of heaven, which were in motion at the creation of the world."

Under the ringing of the bells, the publication further reports, the Patriarch of Moscow and All Russia Kirill (who arrived on Athos earlier) came out of the altar, went to the monastery gates, and then, accompanied by monks, led Putin to the cathedral.

“I cordially greet you on behalf of the Russian Orthodox Church, on behalf of the monastic brotherhood on Mount Athos, on the memorable days of the 1000 anniversary of the presence of Russian monasticism on Holy Mount,” the patriarch addressed the president. - During these thousand years much has happened: Athos has undergone both ups and downs, both peaceful life and war. And very often it is with Russia, with the Russian people, that the quiet life on this Holy Mountain is connected. ” Thanking then the head of the Russian Federation for participating in the rebuilding of the shrines, the patriarch noted that "today at the divine service we prayed for you as the head of the Russian state, we prayed for our church, for the people." In memory, the president was presented the image of the martyr Panteleimon.

In response, the president said that he visited Athos in 2005, and acknowledged that the changes here "have just happened." He recalled that Russia and Athos have long been linked by close religious ties, and "the Athos monastic traditions play a significant role in the life of the Russian people."

The President noted that an “act very necessary for the Orthodox world” is taking place on the Holy Mountain, associated with the strengthening of the moral foundations of society. “You are largely the source of this well-being and grace,” Putin said.

In addition to participating in the celebration of the millennium of the presence of Russian monasticism on Holy Mountain, the Russian president held a meeting with the Greek president, Prokopis Pavlopoulos. The parties signed a package of documents relating to cooperation in the field of investment development, agriculture, energy efficiency, tourism, energy, interregional cooperation, reports RBC.

Contrary to the sanctions, plans of cooperation were approved at the talks, notes "Russian newspaper".

Answering the question of the RG observer about the new gas pipeline project from Russia to Greece, and then to Italy under the Black Sea, Putin said that economic cooperation is the best guarantee for ensuring peace.

“We are ready to consider any project, regardless of the context of political relations with any country in Europe, with our neighbors,” he said. “But we need preliminary guarantees, just to talk about the fact that this is of great mutual interest, we will no longer buy, and we will not spend money on it.”

Something said and the Greek Prime Minister Alexis Tsipras. “We strive to function within the framework of the European Union and NATO as a positive bridge of friendship and cooperation between Europe and Russia,” he said. “Energy should act as a bridge of cooperation in the region, and not as a springboard for clashes, for dictation or for tempting someone.”

Putin’s response was voiced: “We don’t expect from Greece to accomplish the exploits of Hercules, and it is unlikely that Greece will be able to clean the Augean stables of the European bureaucracy”.

Local journalists also asked how Moscow intends to improve relations with Turkey. "We also want to resume relations, we did not destroy them," Putin recalled. He added: “We are waiting for some concrete steps on their part. While they are not.

We talked about the tourist prospects. Here in Greece and Russia everything is fine. Against the background of the “closed” now Turkey and Egypt resorts of Hellas, on the contrary, are in demand among Russians. For March 2016, the number of Russian tourists there grew by 523 percent!

Some experts doubt the practical significance of Putin’s visit to Greece.

Former employee of the Russian Embassy in Greece, international journalist, editor-in-chief of the Moscow Carnegie Center website Alexander Baunov in an interview with the Russian Service "BBC" told why the president of Russia is Greece and Athos.

“The Greeks are primarily pursuing economic goals, but they cannot achieve anything from us because they cannot offer anything so concrete,” he noted.

Russia wants to come to the Greek economy, for example, to participate in the privatization of assets. Now the Greeks must "privatize a lot of things according to the plan of salvation." True, given the current sanctions, the European business (especially state-owned) Europeans do not want to let go where he has serious plans. “Therefore, there will not be any economic specifics significant, breakthrough,” the expert concluded. “It’s just that Russia does not give Greece money, because, firstly, democracy is in Greece, and secondly, Moscow perceives, however, not without reason, Greece as a country with limited sovereignty,” he added.

As for the likely blocking of the extension of sanctions by Greece, Bauen doubts this: "Athens could theoretically block sanctions because they are taken by complete consensus, but Greece will not have enough political courage to do it."

The expert also spoke about visiting Athos. “This year is the millennium of the Russian presence on Mount Athos, and the Greeks are not very fond of Russians on Mount Athos,” he noted.

"The fact is that at the end of the Romanov empire, the Russian presence on Mount Athos was so much eclipsed by all the other presence, both financially, by the number of monks, by the number of pilgrims, and by the amount of money donated from the Russian Empire to Athos, which in fact was already a Russian colony.

And the Greeks felt the excessiveness of this presence and some loss of Athos. They perceive painfully enough attempts to revive this presence, to increase its scale. ”

As a result, they are pleased with the arrival of the Orthodox president of an Orthodox country, but “the Russian presence there is not very happy about them” “Thus,” the analyst concludes, “there is the usual old diplomatic butt, Greece wants to reduce its Russian presence on Athos, and Russia wants to keep it and expand it, if possible.” This is simply an inherited question from all previous Russian governments. ”

Analysts and experts, whose opinions about Putin’s visit to Greece on the Internet are a dime a dozen, have missed one small detail: with the example of Greece (by the way, which is far from being in a better financial position and strongly dependent in every sense on the will of supranational institutions and creditors) any EU state could make one important conclusion. From now on, Putin’s arrival is not a dangerous undertaking for which political punishment will immediately fall on the heads of the perpetrators. Moreover, the Greek media actively and worldwide transmitted news about the visit of the Russian president, and local television followed him almost relentlessly.

It would be ridiculous to talk about isolating Russia against such a background, so even the most progressive Western press somehow forgot about that word. Either the “electrical tape ended”, or the limit of propaganda was groped, beyond which half-truth turns into the most ordinary lie.

Of course, Russia still has to “butt” with Brussels and Washington, and sanctions are unlikely to be lifted this summer. And yet, Putin’s visit to the EU country showed that Russia had already emerged from that tight isolation ring that BN Obama built in 2014 in the year.

Observed and commented on Oleg Chuvakin
- especially for topwar.ru
Ctrl Enter
Noticed oshЫbku Highlight text and press. Ctrl + Enter
We are
Countries that allowed women to fight and kill (history in 19 photos)Joy and sorrow - in one harness
Military Reviewin Yandex News
Military Reviewin Google News
196 comments
Information
Dear reader, to leave comments on the publication, you must sign in.