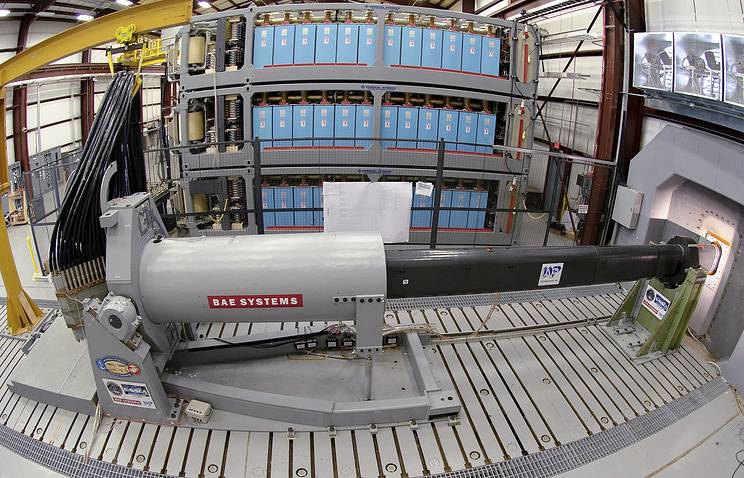 So, the WSJ published a sensational material with comments from high-ranking military officials such as Meat Winter, head of special development for the US Navy, and First Deputy Secretary of Defense Robert Wark.

A First Look at America's Supergun

The essence of the material is a story told to American readers about the testing of a new super-weapon developed by American specialists. Railgun, railgun, in short - a gun, where the projectile is accelerated by electromagnetic fields. Up to an impressive speed in 4500 miles per hour or, more conveniently, 7200 km / h. And the projectile, accelerated to such speed, breaks through everything that comes its way, due to its enormous energy.

There's also a video from the test ...

“We cannot ignore the fact that Russia has the ability to produce and fire large amounts of conventional ammunition for great distances. We need to be able to withstand such volleys. The railgun will potentially give us such a means,” says Robert Wark.

Well, well, that Mr. Wark understands that we have something zapulnut in the direction of America. And that it is very difficult for America today to oppose something to the newest Russian complexes. However, is the next “wunderwatch” so capable of stopping “Yarsy” and “Voivod”, as far as Mr. Wark is sure?

Gentlemen are sure. In their dreams, ships armed with wonderweapons. Striking, according to Winter, "ships, Tanks and terrorist camps. "Especially about the" terrorist camps "pleased. The fact that the glorious US Air Force could not do, will be done by the no less glorious US Navy. Namely, they will amaze. Precisely and inevitably.

But why the US Navy?

It's simple. The power consumption of the new weapon is not just impressive. In order for the railgun to work, a power of “all” 25 megawatts is required. That is comparable to the power plant, which provides energy to a small town, thousands per 8-10 inhabitants. Therefore, it is clear that only the Navy can talk about mobility, and even mentioning Russia and China in the context.

Well, the alignment is not bad. Having a miracle bandura, having a trough at our disposal, which is capable of feeding this crap with megawatts of energy, one can even talk about its actual trials and uses. Against whom - it is clear, there will be goals.

However, there are nuances. As always, however.

The development of this wonderful weapons of the US Navy have been 10 years. And they threatened 500 million dollars for this business. To date, two such facilities are located at the test site in Dahlgren, Virginia. One from BAE Systems, the other from General Atomics. And over the years 4, since 2012, the systems have been debugged. And so it happened. Americans showed a miracle weapon in action.

Next, it is planned to install these railguns on the catamaran JHSV-3, in order to carry out tests already at sea.

And here attention, a nuance on an exit!

Management of special developments "asked" the Pentagon for a little more money. On the final adjustment of the samples and field (more precisely, the sea) tests.

And how much is this "slightly"?

You can talk a lot about the prospects of the railgun, but the figure is simply admirable. Ten years, half a billion dollars, and here it is, the light at the end of the tunnel! Only 800 of millions of dollars, and Russia and China will tremble from the same prospect of the appearance of a vessel carrying a miracle babakhalka on board.

Here's how to cut the budget! There is something to learn. Especially if the episodes stories with laser weapons, stealth planes and other wonders have not taught anything. Let's see, by the way, taught, or not. Most likely, not taught. But since this is not our budget, we will not worry about it. It is also clear to the person who understands that the railgun is as scam as many other inventions in the field of super-weapons.

Another blaster gash. So that we are completely lost appetite.

And even better - a jet engine for space rockets. To not depend on the Russian.