Political silicone. How drafting and blue cheese will save Russia ...

30 May 2016
219
The country is aware of the fact that 22 May across the whole territory for the first time in stories Russia held a preliminary vote, organized by the party of the parliamentary majority - "United Russia". - The so-called primaries, the discussion of the goals and outcomes of which are worthy of separate material. And to discuss, in fact, is that. 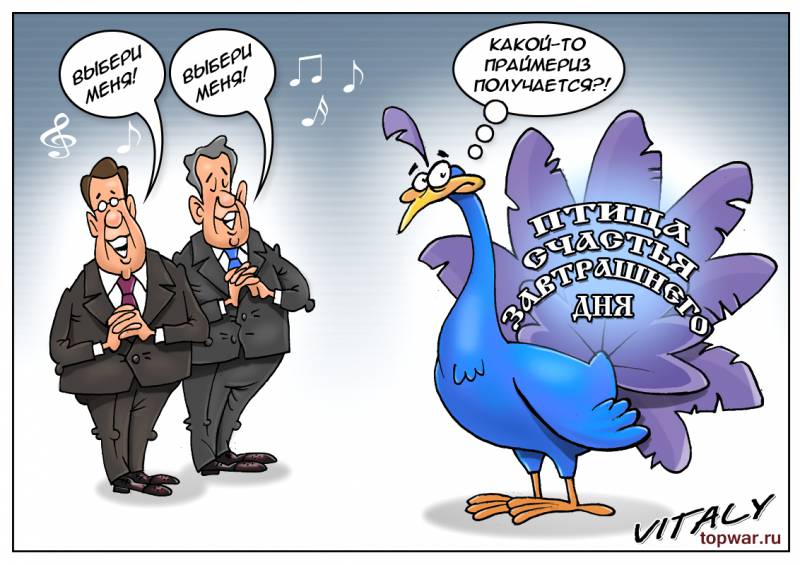 To begin with, official information from the top of the United Russia party is about the election results (in turn) of candidates. The chairman of the United Russia Federal Organizing Committee, Sergei Neverov, during the Friday (27 May) meeting, announced that about 10,5 million citizens took part in the primaries (preliminary voting). This is roughly 9,6% of the total list of Russian voters. In other words, according to the results, every tenth voter came to the polling stations organized by the parliamentary majority party. According to representatives of the Federal Organizing Committee, "they expected less."

Sergey Neverov:
I want to thank once again everyone who came and expressed support for the participants in the preliminary voting.

Thanks to all who came to the polls accepted ...

So what was the goal pursued by United Russia - the party, which is clearly going to get a number of votes in September, allowing, without any of the opponents and even pseudo-opponents, to control the course of the entire legislative process in the lower house of the Russian parliament? The officially announced goal is to find public opinion leaders capable of creating a cadre party reserve. At the same time, attention is drawn to the fact that the list of candidates for candidates in all regions of Russia by more than 50% consisted of citizens who are not members of the United Russia party. From this it follows, as it were, the unofficial goal of holding a preliminary vote — to introduce (and in some places and draw) people into the party who are well known on the ground and who seem to be willing to trust. We are ready to trust, well, simply because the list turned out to be a person familiar to potential voters, who had not yet had time to get familiar with stomach cramps or show up in certain (not doing honor) reports.

In general, you will agree, in a party-like manner, with a far-sightedness (well, at least at first glance): inquire about the recognition of a potential candidate, then test the ground for how much this recognition can be translated into percentages. And only then to draw a conclusion as to whether or not to include this individual person in the party list, so that in September there would be less doubt about the relative success in the direct elections to the State Duma. In general, the Western model one way or another, but once again transferred to the Russian political surface.

Well, now, actually, about the course of such a transfer of the Western model ...

If earlier, as you know, the party helped to build and live, now the party (de jure is already another) helps us, the citizens of Russia, not to miss. For this great thanks! ..

If it were not for the “United Russia” primaries, the Russians might never have known that the school course of drawing and the introduction of tax holidays for manufacturers of a “strategically important product”, which in Russia is (needless ...), will save the country with mold. If the reader has decided that this is an absurd author's pearls, then the reader is so deeply mistaken. These are real proposals of real participants of the preliminary vote of United Russia in Yekaterinburg and Altai Krai.

Thanks to the United Russia primaries, the country learned that within our Fatherland there was a dime a dozen of their own Vitaliy Klitschko, who, like no one, beat off the head, but who reflect in about the same categories as the current Kiev mayor. Moreover, the individual characters who participated in the debate, in their color in general, were superior to the mayor's head with the boxing past: impenetrable sunglasses of one of the potential “Fatherland saviors” are worth ... It seemed that quite a bit more, and someone from debating all the same, he will call upon you and me to “prepare for the earth” or speak out about the colors of “tomorrow, which not only everyone can look at.”
Here, as they say, it is better to see once:

No, it is, of course, understandable that representatives of all sectors of society — from a member of a comedy TV program to a person with “evening” education — can and must become ... It is also clear that the parliament, including United Russia itself, needs “ fresh blood ”... But at the same time, it seems that the political technologists in Russia, nevertheless, decided to transfer the elections to a self-sustaining show, not a bit behind the same American“ partners ”. Proof of this can be considered at least the fact that a seemingly ordinary inner-party event suddenly grew into a medina project in order to draw attention to which people were released to the foreground, discussing performances of which is a special taste even for that person. country life did not show.

Political technology sets as its task not at all that, as a result, people in the parliament were occupied by people who are able, through discussions, to come to the optimal solution of each of the accumulated problems. The main goal is to draw attention to politics, even if using the psychological principle of a negative or questionable dominant. This is when a fairly well-known person appears on the screen, while one from whom the vast majority of people did not expect political activity. The same representative of the “Ural Pelmen Show”, which is now actively being discussed online as a candidate with a “nudity” and as a candidate who, “by caring for herself, can control how to care for the city and the country”.

With such political technologies, United Russia seems to have decided to wipe at the politically holy ... - Vladimir Zhirinovsky, who for many years was the undisputed leader among the electorate voting on the principle: "But in the Duma it will not be boring!" - to jump around those who suddenly decide to run for the number of “non-systemists” who fuck together in mattresses (and literally, too).

Indeed, not boring. When the parliament can turn into a platform for role-playing games, what a boredom is there ... Yes, and some vital questions will be discussed: how much men and women evaluate the appearance of Yulia Mikhalkova, who, it turns out, their roles in the show are not even plays ..., before how is still strategically important for Russia cheese with mold. In principle, in some cases, such questions today are much higher on the agenda of both the federal and regional parliaments than, for example, questions about raising the standard of living of the population or the adequacy of tariffs against the background of the proposed quality of service.

Apparently, the show should be for citizens above the questions that most really care. What kind of fundraising is there for the promised increase in pensions, if a candidate with such lips appears on the screen ... Is it a hint that for replenishing (at least Yekaterinburg) the budget now has an effective means - political silicone? ..

Ctrl Enter
Noticed oshЫbku Highlight text and press. Ctrl + Enter
We are
Results of the week. “He was terribly unlucky, especially on Friday”Situational analysis of the death of the MH17 flight (Malaysian Boeing 777), made on the basis of engineering analysis from 15.08.2014
Military Reviewin Yandex News
Military Reviewin Google News
219 comments
Information
Dear reader, to leave comments on the publication, you must sign in.