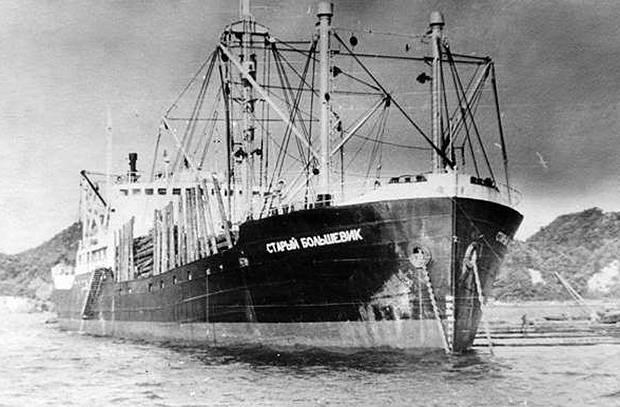 В stories Of the Great Patriotic War, the Arctic convoys, which supplied a considerable part of military equipment from the countries - allies of the anti-Hitler coalition - to the USSR, occupy a special place. They accounted for about a quarter of all goods transported by Lend-Lease, because it was the fastest way to transfer equipment that was so necessary to our warring country. But the most dangerous one: it took about 14 days, however not all ships reached the end of the route: only 1941 of the convoy passed from 1945 to 42, that is, 722 transport in total, and 58 transports failed to reach the ports of destination. How hard this route was, one can judge by the history of a single Soviet ship, the “Old Bolshevik”. This ship only survived the 27 day of May, 1942 of the year, survived the 47 attacks of German aircraft - and yet, even after a direct bomb hit, it managed to reach Murmansk.

The first deliveries to the USSR under the program of allied aid, which is now all en masse called Lend-Lease (although initially this word referred only to American military aid), began in the second half of the summer of 1941. The arctic route was chosen as the fastest and most secure route at that time. The ice-free Soviet ports of the Arctic Ocean - Murmansk, as well as Arkhangelsk, became the finishing point of the Arctic convoys. It was this city of 31 in August that 1941 of the year received the first allied convoy, called “Dervish”, and consisted of 7 cargo ships and 15 escort ships. The next convoy, to which the PQ-1 index, which soon became famous, was already assigned, arrived in the USSR on October 11. And the first convoy that reached Murmansk - PQ-6 - arrived at its destination on December 20 of the year 1941.

The most famous among the polar convoys were two marching in a row - PQ-16 and PQ-17. The first was famous for being the most successful in terms of the ratio of the costs of its posting and the value of the delivered goods. The second, alas, is notorious for the fact that his training was under the tight control of the German intelligence services, and therefore along the way he was literally defeated by the German aviation and naval fleetprimarily by submarines. Moreover, this defeat was a kind of revenge for Germany for the successful posting of the PQ-16. Although the fate of the "sixteenth" can not be called simple, which is an example of the feat of the ship "Old Bolshevik".

This ship fell into the polar convoys with purely peaceful work - transportation of the forest by the Northern Sea Route. The “Old Bolshevik” was built in the 1933 year at the Northern shipyard in Leningrad and belonged to the category of large-capacity logging trucks (length about 111 m, displacement - 8780 t, carrying capacity - 5700 t general cargo or 5100 t forest materials). The project was so successful that within five years - from 1930 to 1935 years - they built a very large series of 15 ships. Nine timber trucks passed Admiralteysky plant, another six - Northern shipyard. These vessels were distinguished by a deck of increased strength, since according to the project, up to a third of the timber cargo was placed on it. Moreover, such a load could have a height of up to 4 m, and therefore timber trucks of the “Old Bolshevik” type, which were also called “big timber trucks”, were famous for their excellent stability, that is, the ability to sail without losing balance. Finally, since the northern seas were identified as the main navigation area for large logging trucks, they received a reinforced hull and ice reinforcement. In a word, for their time these were excellent vessels, highly maneuverable, with good seaworthiness.

All this was the reason why large logging trucks with the beginning of the war called for service. A considerable part of them worked in the Far East, delivering steam locomotives vital to our country from the USA to the Soviet Union - and very much succeeded in this. A "Old Bolshevik", who worked in the Murmansk Shipping Company, became part of the polar convoys. To ensure the protection of the ship from the attacks of enemy aircraft, two anti-aircraft guns and several anti-aircraft machine guns were mounted on it - and the forest truck turned into a transport.

At the end of March 1942, the “Old Bolshevik” came to New York, where more than 4000 tons of shells and explosives, as well as a dozen planes, were loaded onto its board. In early May, the ship sailed into the open sea and headed for Reykjavik, where at that time most of the polar convoys were being formed. In the late evening of May 19, the formed caravan PQ-1942 headed for Murmansk. It included 16 cargo ships escort ships under cover of 35, as well as cruisers and 17 destroyers accompanying the caravan to Bear Island.

The first five days of the journey were calm: Hitler’s airplanes or submarines did not get to the caravan. But in the morning of May 25, when the convoy reached the island of Jan Mayen, two dozen bombers and torpedo bombers attacked him. And hell began. The attacks followed one after another, and the short May nights did not bring great relief to the ships and ships of the convoy. The worst day for PQ-16 was the May 27 day - the same one that forever changed the fate of the “Old Bolshevik” and its crew.

By the will of fate, Soviet transport was at the tail of the warrant, and therefore it was subjected to particularly violent attacks by German aircraft. For the time being, the dense fire of his own anti-aircraft guns and machine guns, as well as very active and precise maneuvering, saved him from major troubles. The ship literally dodged "Junkers" diving at him, and the main merit in this belonged to his captain - a seaman with 20-year experience, experienced northern seaman Ivan Afanasyev, and a helmsman - a former Baltic-seaman Boris Akazenko. It is through the efforts of the steering "Old Bolshevik" three times managed to dodge close torpedoes dropped by the enemy's torpedo bombs. 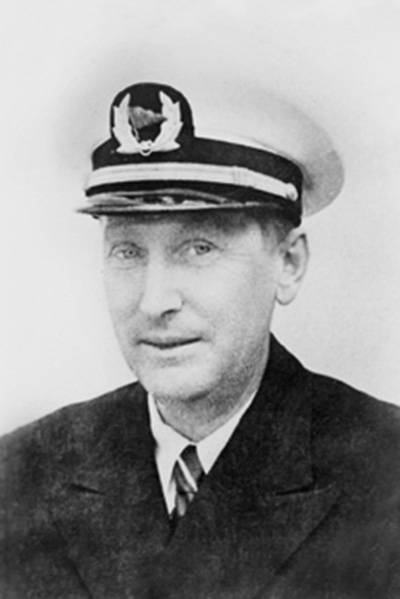 Ivan Afanasyev. Photo: sea-man.org
However, no matter how maneuvered the transport, no matter how they put a fire barrier in the path of the attacking aircraft of its anti-aircraft gunners, one of the 47 air attacks ended with the success of the Nazis. At the same time, the “Old Bolshevik” attacked nine enemy aircraft, and one of them managed to get directly into the forecastle, just before setting up. The explosion killed the calculation of the front anti-aircraft gun, but it itself was broken; the captain's bridge hit Ivan Afanasyev with a blast wave. But the worst thing is that the same bomb caused a fire in the hold where the ammunition load was located. In order to prevent an immediate explosion, Boris Akazyonok and the political assistant to the captain, the real old Bolshevik (he participated in the October Revolution as a Baltic sailor) Konstantin Petrovsky built a human conveyor through which shells were manually transported from a burning compartment to a safe place.

Noticing that a fire was starting up at the “Old Bolshevik”, and having a good idea of ​​what kind of cargo was on its board, the command of the PQ-16 convoy suggested the Soviet sailors to leave the ship that threatened to explode every minute. The English destroyer had already approached him to pick up the crew of the Russian transport and then sink the ship: this was the usual practice of convoys. But the crew of the “Old Bolshevik” answered this proposal with one phrase: “We are not going to bury the ship”. And then the convoy, snapping at the continuing attacks of the aircraft, went further, and the burning transport remained alone with the cold sea and the burning flame.

The crew of the “Old Bolshevik” fought for eight hours to save their ship - and in the end won! The fire was extinguished, a patch was put on the holes, and the transport moved after the convoy. He caught up with him the next day, when no one expected him to return. Seeing a logging truck wounded, with a hole in the board, a trumped-down timber carrying vessel and a burnt deck, approached the order and took its place in it, the convoy commander ordered the “Made good” signal to be raised on the leier of the flagship escort ship. On the stingy on emotions language of sea signals, this means admiration for the actions of the crew of the ship, to which this phrase is addressed.

In the evening of May 30, when the main part of the PQ-16 convoy entered the Kola Bay, the Old Bolshevik, smoking with a disfigured pipe, met with artillery salute of ships standing in the roadstead. The senior escort officer gave the following telegram to the fleet command: “Allow me to convey to you my personal admiration, the admiration of all our officers and all the English sailors for the heroic actions of your Old Bolshevik. Only Russians could do that. ” And soon a new telegram came to the Soviet Navy command - from the British Admiralty: “On behalf of the Royal Navy, I would like to congratulate your ships on the excellent discipline, courage and determination shown during the battle for six days. The behavior of the “Old Bolshevik” team was magnificent. ”

In the Soviet Union, the feat of the “Old Bolshevik” crew was rated no less highly. The captain of the log truck Ivan Afanasyev, pompoly Konstantin Petrovsky and helmsman Boris Akazyonok 28 on June 1942 were awarded the title Hero of the Soviet Union, and all other crew members were awarded orders and medals, both alive and dead (four seamen were buried after the battle at sea). The Old Bolshevik himself was also awarded the Order of Lenin: his image has since graced the flag of the ship. With this order-bearing flag "Old Bolshevik" in June 1942, as part of the next convoy, went to England, from where he went to the Pacific Ocean and until November 1945, acting as part of the Far Eastern Shipping Company, continued to be engaged in the delivery of military cargo from the United States. The ship remained in the working class until the 1969 year, until finally the years took their toll ...

The memory of the “Old Bolshevik” and its heroic crew is still alive today. In 2011, the Oka shipyard handed over to the seamen of Azov the universal cargo ship Kapitan Afanasyev (type RSD44 Heroes of Stalingrad, a series of ten ships). And in Murmansk, a rescue tug vessel “Captain Afanasyev” has been working since 1960, which has conducted more than one rescue operation in the Arctic.

Ctrl Enter
Noticed oshЫbku Highlight text and press. Ctrl + Enter
We are
Lend-Lease. Northern convoys. Strategic importanceDiplomats of the People's Commissariat of Defense: on the eve and during the war
Military Reviewin Yandex News
Military Reviewin Google News
51 comment
Information
Dear reader, to leave comments on the publication, you must sign in.