31 May 2016
4
The light reconnaissance tank VK 901 was built in a small series and even reached limited operation in the army. However, the German army did not order full-fledged serial production of such equipment due to the lack of noticeable advantages over existing armored vehicles. Despite this, work on promising development projects tank Pz.Kpfw.II did not stop. It was proposed to upgrade the tank VK 901 with an increase in some basic characteristics. The result of this work was the light reconnaissance tank VK 903.


In the 1941 year, after carrying out all the necessary tests, the light tank VK 901 was no longer regarded as a promising mass vehicle for the troops. The prototype checks showed that such a tank has no significant advantages over the existing equipment of a similar class. As a result, the mass production and mass operation of such a machine was impractical. Nevertheless, MAN did not refuse to further develop the project. By the end of 1941, a modernization project was prepared for an existing tank with the new designation VK 903.

One of the main claims to the tank VK 901 concerned his body armor. Its frontal parts had a thickness of 30 mm, sides and feed - 15 mm. Such sheets of armor could not provide a noticeable increase in the characteristics of the protection in comparison with serial equipment. Thus, if the authors of the project still wanted to bring it to mass production, the tank needed more serious reservations. It was decided to remake the armored case of the existing machine with the reinforcement of some armor plates. To speed up the development of a new project, it was decided to abandon major changes in other components and assemblies. 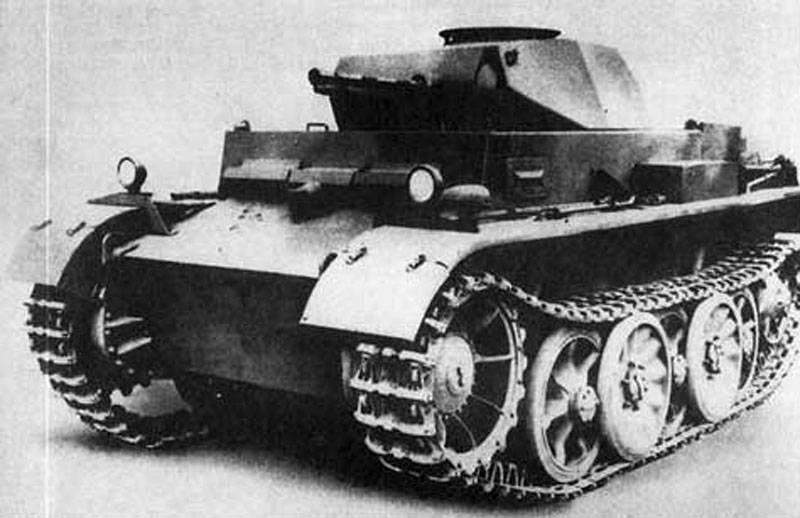 The only prototype of the tank ML 903. Photo Aviarmor.net

The former should have remained the general design of the hull, as well as its layout. As before, it was proposed to use the layout, traditional for German tanks, with a front-mounted powertrain and control compartment, a central fighting compartment and an engine compartment in the stern. The hull shape was also preserved with three front plates placed at different angles to the vertical. The sides of the hull formed the extended upper part of the hull, which served as a turret box.

The previous tank needed to increase protection, but in the new project this task was only partially solved. The armored hull of the VK 903 tank retained the frontal part of 30-mm sheets, and the sides and stern were now offered to be made from 20 mm-thick parts. This made it possible to a certain extent to improve the protection against shelling from the side or from behind, but it gave only a limited increase in the level of protection. The bottom and the roof of the hull should have been made of 20 and 10 mm thick sheets, respectively.

Tank VK 903 "inherited" from the previous project power plant and transmission. In the rear of the hull it was proposed to mount a Maybach HL 66P carburetor engine with an 150 hp power. A mechanical transmission based on the ZF Aphon SSG48 gearbox was connected to the engine using a long driveshaft. The transmission units were located in front of the control compartment and transmitted torque to the front drive wheels.

During the modernization of the tank VK 903 retained the design of the chassis. On each board it was proposed to install five large-diameter road wheels with an individual torsion bar suspension. In this case, the rollers partially overlapped each other. Two rollers were placed with a displacement outward, three - in the inner row. The front drive wheels were installed with a noticeable excess over the support rollers. The aft guide wheels were mounted slightly above the rollers.

New tank retained the existing tower design. On the chase of the hull it was proposed to install an armor structure, previously developed by Daimler-Benz. She had a 30-mm frontal sheet and a mask of the same thickness, and on the side and rear of the tower was protected by a curved 20-mm detail. Above, there was a two-part roof. The tower kept a set of periscope viewing devices in a small commander's cupola. Additional inspection hatches in the sides were not provided for the purpose of some strengthening of the structure.

The light tank complex VK 903 was supposed to be borrowed from the first version of VK 901. The 20-mm automatic gun KwK 38 L / 55 and the 7,92-mm MG 34 machine gun were to be mounted on the common mounts in the turret. It was proposed to search for targets and direct armaments using a TZF 4 / 38 type sight. Using hand drives, the gunner could turn weapon in any direction in the horizontal plane and direct it within a relatively wide vertical sector. 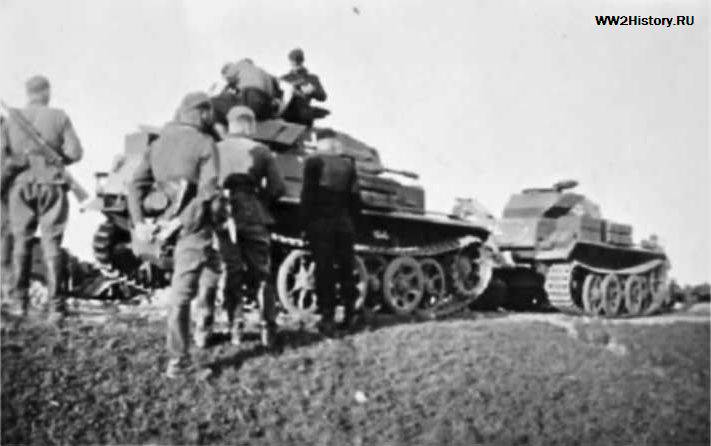 VK 903 and other equipment under test. Photo Ww2history.ru

The crew of the new armored vehicle was supposed to consist of three people: the driver, the radio operator and the commander-gunner. The first two were located inside the case, in front of it. To monitor the environment, the tankers in the hull had to use a set of inspection hatches. Two such devices were in the vertical front sheet, two more - in front of the sides. The driver had at his disposal the entire set of necessary controls, the FuG 2 radio station was installed at the radio operator’s workplace.

The new light tank VK 903 was slightly different from the previous VK 901 in terms of design, which, among other things, led to the preservation of size and weight. The armored vehicle, like its predecessor, had a length of 4,24 m, a width of 2,4 m and a height of 2,05 m. The combat weight was determined at the level of 10,5 t. By maintaining the same engine, the mobility of two tanks should not noticeably differ. VK 903 could reach speeds of up to 50-55 km / h and travel at a single fuel up to 200 km.

The first prototype of a promising tank with slightly reinforced armor was built at the beginning of 1942. During the first tests, the car showed good performance, but at this stage it was decided to change the project. In March, 42-th was offered to use a different transmission. The existing units were proposed to be replaced with a transmission borrowed from one of the latest modifications of the tank Pz.Kpfw.38 (t). This allowed to a certain extent to improve the basic characteristics of the machine, although it could lead to a significant shift in the completion dates of the project.

The first prototype of the tank VK 1301 with a deckhouse instead of a tower. Photo Aviarmor.net

At the same time, the military approved a new project and decided to order a number of serial machines. In accordance with the new order, MAN was to supply the Wehrmacht 200 light reconnaissance tanks VK 903. The first 120 machines were required to be built and handed over to the customer by the end of the current year. In connection with the plans for full operation in the troops, the tank received the official designation Pz.Kpfw.II Ausf.H. Despite numerous differences, officially VK 903 should have been considered a further development of the existing Panzerkampfwagen II.

Before the start of mass production, the designers of MAN had to recycle the transmission of the machine to meet the new requirements of the customer. These works took several months, and as a result had a great influence on the fate of the project. The process of changing the project and preparing for serial production was seriously delayed. By September, the 1942 of the year, MAN specialists had failed to complete the assigned tasks. After that, the customer familiarized himself with the current state of affairs and made the final decision on the future fate of VK project 903 / Pz.Kpfw.II Ausf.H.

Work on updating the existing project was seriously delayed. Because of this, there were reasonable doubts about the possibility of building the 120 required tanks by the end of the year. Moreover, it was possible to doubt the very possibility of starting the mass production of new equipment before the start of 1943. Due to the impossibility of implementing all existing plans in September 1942, it was decided to cancel the order for the construction of Pz.Kpfw.II Ausf H tanks. Difficulties with updating the transmission led to the fact that by the time the works were completed, only one experienced tank was available. The prototype with the updated composition of the units was not built.

One of the latest VK 1303 prototypes that got the tower. Photo Aviarmor.net

At the same time, until the end of the summer of the 1942, the MAN company managed to build and test three prototypes of the promising VK 1301 tank, which was a modified VK 903 version. In this project, armor protection was further enhanced. While preserving all the basic design features, the VK 1301 tank should have differed by a slightly greater thickness of the main parts of the hull and turret, which, among other things, led to a certain increase in the combat mass. The design of the tower was also finalized, which lost a small forage niche.

Power plant, transmission, chassis, crew, etc. Components of the new project corresponded to the early version of VK 903. The characteristics of the existing units made it possible to withstand the increased loads associated with the appearance of the new armored corps.

VK project 1301 also proposed to strengthen the armored vehicles. The main weapon of the tank was to be the newest 55-mm gun KwK 3901. On some mounts with a gun it was planned to install a rifle-caliber machine gun. Ideas about a significant increase in firepower were later rejected. Calculations showed that the existing hull and turret are unlikely to withstand the recoil of a 55 caliber gun. For this reason, over time, a gun mount similar to that used on VK 1301 and VK 901 tanks was introduced into the VK 903 project. Now the new tank was to be equipped with an 20-mm KwK 38 L / 55 cannon and a MG 34 machine gun. 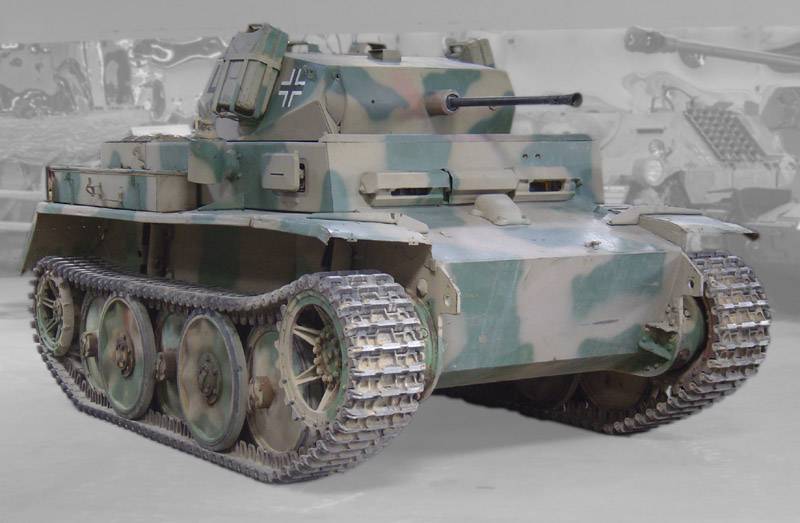 For several months, the developer has built and tested four prototypes of the VK 1301 tank. In view of the delays in assembling the new turret, the first prototype came to the test with a fixed wheelhouse, imitating the weight of the turret with weapons. The following three prototypes received full combat compartments with the necessary weapons. With the logging and towers, all four new-type machines passed short-lived tests, which ended by the end of the summer of 1942.

Until a certain time, the light tank VK 1301 was also considered as a possible successor to the Pz.Kpfw.II cars of early modifications. In this regard, it is often called Pz.Kpfw.II Ausf.M. However, the army did not receive such vehicles and could not replace the existing armored vehicles with them.

Failures of the basic project VK 903 / Pz.Kpfw.II Ausf.H, which did not have time to complete by the deadlines, had a negative impact on the version of its development. As a result, in September 1942, it was decided to abandon both VK 903 and VK modification 1301. By the time of the final refusal to continue the work and cancel production, one VK 903 prototype and four VK 1301 machines were assembled. Constructed machines, as follows from the available data, remained with the developer and later, probably, were dismantled. Unlike previous tanks VK 901, they did not manage to get on military trials.

Two options for upgrading the light reconnaissance tank VK 901 could not get out of the test and refinement stage. Nevertheless, in the course of these projects, some new ideas were developed, which later found application in the creation of the following models of armored vehicles. Thus, the further development of the VK 901 - VK 903 - VK 1301 line was the VK 1303 light tank, better known as Pz.Kpfw.II Ausf.L Luchs. Unlike its predecessors, this machine was built in series and was in service.