Savchenko said she was ready to become president of Ukraine

27 May 2016
130
The Ukrainian pilot Nadezhda Savchenko, who was pardoned the other day by the President of Russia, returned to Ukraine and decided to immediately join political activities. For a start, it was announced that she would join the committee on defense and national security of the Verkhovna Rada. Now there are reports that Savchenko has declared her readiness to become president of Ukraine, "if it is necessary for the people." 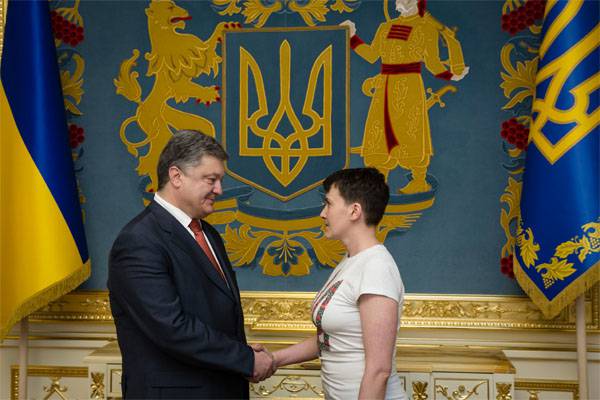 Information Agency TASS leads Savchenko's statement:
If you need me to be president, well, I will be president. I believe that people have learned not to vote for buckwheat. I will work where Ukraine will need.

The situation with the pardon Nadezhda Savchenko commented on in the Russian Ministry of Foreign Affairs. Russian Foreign Ministry spokeswoman Maria Zakharova said that the decision to pardon and return Savchenko to Ukraine has nothing to do with the Minsk agreements.

Recall that the convicted Nadezhda Savchenko was exchanged for two Russians (Alexander Alexandrov and Yevgeny Yerofeyev), whom the Kiev court sentenced to long term prison terms.