27 May 2016
52
May 26 in Japan opened a two-day summit G7 ("G-7"). On the eve of the event, the boss of the whole planet B.H. Obama announced that the G7 leaders will gather to discuss the situation in the Middle East, the South China Sea, the nuclear issue of the DPRK and some other small things. Federica Mogherini to this prudently added the question of sanctions against Russia: they should be extended. Presumably, Obama himself did not want to impose this topic: the extension of sanctions should look like the goodwill of the peoples of Europe who hate the "Russian aggressors" with their whole democratic heart. 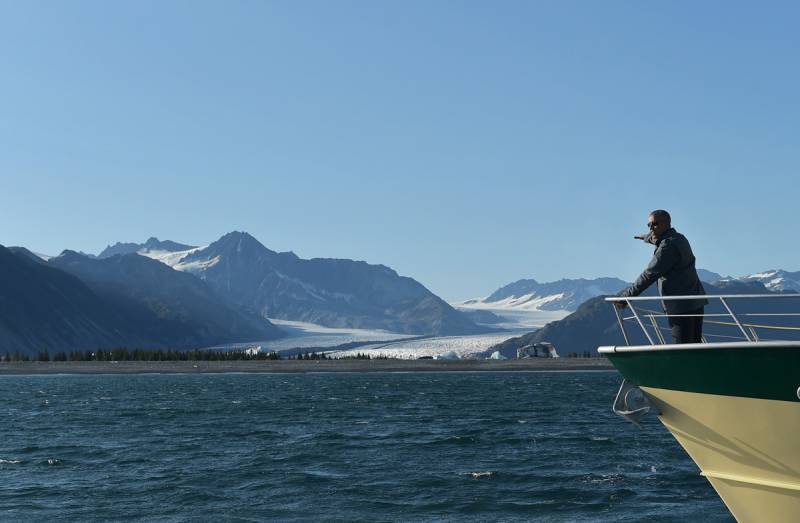 There she is, Japan. Mr. Obama is studying geography in practice.

On the eve of the summit, Mr. Obama said he did not intend to apologize for the nuclear bombardment of Japanese cities in 1945. The Japanese did not like this geopolitical impudence, and the G7 summit started against the backdrop of protest demonstrations. Citizens of the Land of the Rising Sun objected to the American President’s visit to Hiroshima in this way. However, Obama does not care about Japanese citizens.

The president of the whole planet also said that the purpose of his trip to the summit is to honor the memory of those killed in World War II and to confirm his commitment to the policy of non-proliferation of nuclear weapons. weapons. Mr. Obama believes that his visit will remind the Japanese of "a unique alliance that countries have supported for many decades."

As the "BBC", G7 summit began with a visit to the Ise Shinto temple (he is more than 2000 years old). The temple is dedicated to the sun goddess Amateras Omiki. Shinzo Abe thinks going to a holy place will help world leaders understand Japanese spirituality.

From the Japanese tradition, Shinzo Abe went straight to the topic of a new global crisis. The Prime Minister warned colleagues in the "group of seven" about the danger of a repetition of the 2008 sample of the year.

The head of the government of Japan, notes Newsru.com, believes that "the world economy is now at a crossroads." And there may be mistakes.

“If wrong measures are taken, we can face a crisis whose scale goes beyond the usual economic cycles,” the premier believes.

However, the leaders of the G7 countries differed in their assessments of the risks of a repetition of the global economic crisis 2008 of the year.

It is also reported that the leaders of the G7 states took shovels in their hands and planted Japanese cedars near the inside of the shrine of Ise Jing.

As for calories, the guests consumed national Japanese delicacies: deep-fried green peas, sea urchins, burdock root roll, eels, and Matsusaka beef. Then chickens with basil and miso bean paste sauce were served. The participants had a hearty lunch with rice vodka from Mie Prefecture and grape wine from Yamanashi and Nagano. Before taking on the chest, the Summit members rode on "unmanned" Japanese cars. Mr. Abe is sure that cars without drivers will reduce the number of accidents and reduce the number of traffic jams.

From the drones on the wheels and rice vodka participants moved to the burning topic of sanctions.

In the final declaration of the G7 summit, it was noted that the G7 states recognize the importance of a dialogue with Russia, but the duration of sanctions against Moscow is associated with the implementation of the Minsk agreements. “The term of sanctions is associated with the full implementation of the Minsk agreements by Russia. Sanctions can be lifted when Moscow fulfills these obligations, ”the newspaper quoted as saying. Kommersant.

There is an important clarification - Western sanctions can be strengthened: “We can also take additional restrictive measures to increase costs for Russia if its actions require it.”

The master of the planet, Mr. Obama, in some way doubted the effectiveness of the “settlement” in Ukraine.

The US president said that he had discussed with the partners in the G7 the situation in Ukraine. “We also touched on the theme of Ukraine, where we began to see some progress in the negotiations, but we still see too much violence. We need to settle them (the remaining moments), ”Obama quotes. RIA News".

In short, in the attitude of the powerful to Russia nothing changes. Yes, and why would? A resident of the White House said long ago that the great America never recognizes the entry of the Crimea into the Russian Federation. Europe to the chairman of the world (not to be confused with V. Khlebnikov) assented. So why change attitude?

Political scientist, director of the Institute for Political Studies Sergey Markov said "Free Press"that the extension of anti-Russian sanctions in G7 is supported by almost all the participants, while the United States, the United Kingdom and Canada speak “from extremely tough positions”.

In general, the event in Japan was assessed by the leading expert of the Center for Military-Political Studies of MGIMO, Doctor of Political Sciences Mikhail Alexandrov.

According to him, the current summit is "a largely propaganda event, designed to present the West as the master of the fate of the world."

There is nothing to add to this. The assembled "leaders of developed countries", planted Japanese cedars and drunk rice vodka, gathered only to talk ... about Russia. About that Russia, which was "excluded" from the "seven" and which was "isolated". Apparently, some people in the White House are now shaking greatly: what if some Hungary does not sign the extension of the sanctions? For retiring Obama, this would be a bang. Historical blow, we would say. Will a person from Budapest hit the impudent hegemon - will he give him a heel in his belly?

If you do not knock, the sanctions will be extended. By the goodwill of the Euro-people.

Ctrl Enter
Noticed oshЫbku Highlight text and press. Ctrl + Enter
We are
Iran Air Show 2016 air show opened in IranResults of the week. "We did not study at universities .."
Military Reviewin Yandex News
Military Reviewin Google News
52 comments
Information
Dear reader, to leave comments on the publication, you must sign in.