Two years in the crucible of war 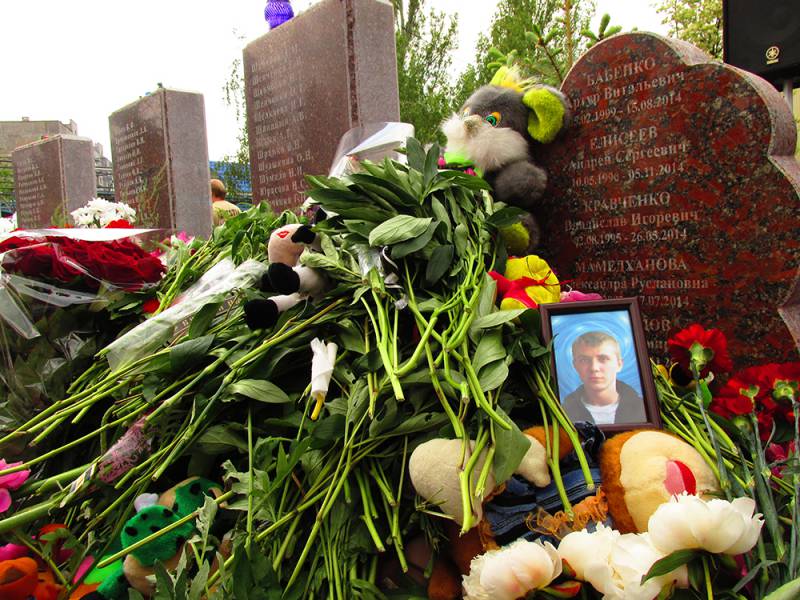 For the residents of Donetsk, the real war, when the enemy directly comes to the threshold of the house, began on May 26, 2014. The very day after the so-called presidential election took place in Ukraine after a real coup d'etat. Mr. Poroshenko was congratulated on his victory with fanfare, and a military circled over the Donetsk airport, over the railway station, over the surrounding areas aviation. It was then that the people of Donetsk learned what airstrikes are. Learned what war is.

Before that, the war was somewhere not so far away, but not very close. Slavyansk was already blazing, the best people were already standing at the checkpoints of the nascent Republic, fighting losses had already gone. But still, in secret, many hoped that their evil would not be affected. Not only touched, but also destroyed many houses, separated many families. There is no airport in Donetsk now, there is no existing railway station, and many no longer have children, parents, friends ...

"ATO" -this called in Kiev, the war unleashed against the Donbass. The antiterrorist operation ... Although in reality it is the most real, protracted terrorist act that killed tens of thousands of people already. But the monstrous terrorists are patronized by the West.

And on that day, when the most cruel punisher of this war was solemnly met in Kiev, - in Donetsk they were preparing for the tragic anniversary ...

One of the districts that took the heaviest blows of the junta was Kuibyshevsky. This includes the Oktyabrsky settlement, which is located near the Donetsk International Airport. Sergei Prokofiev. This village continues to suffer to this day and remains a very dangerous area. 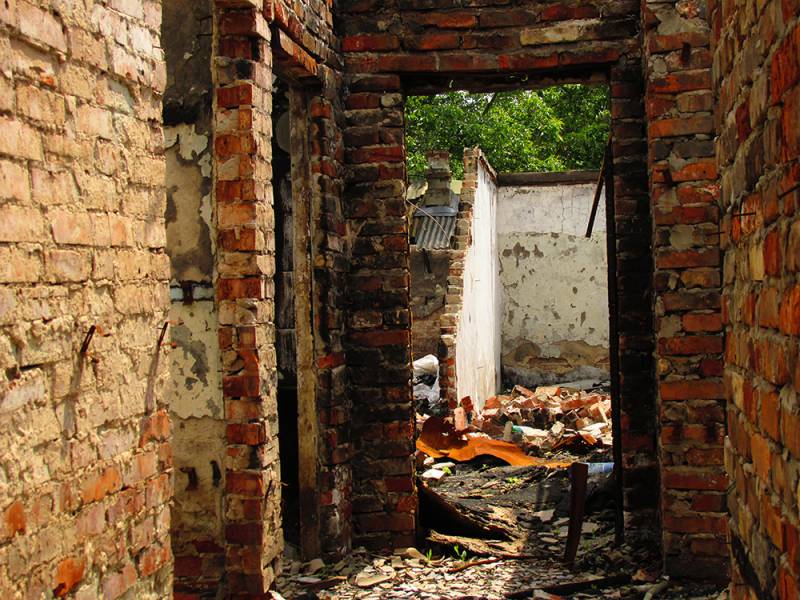 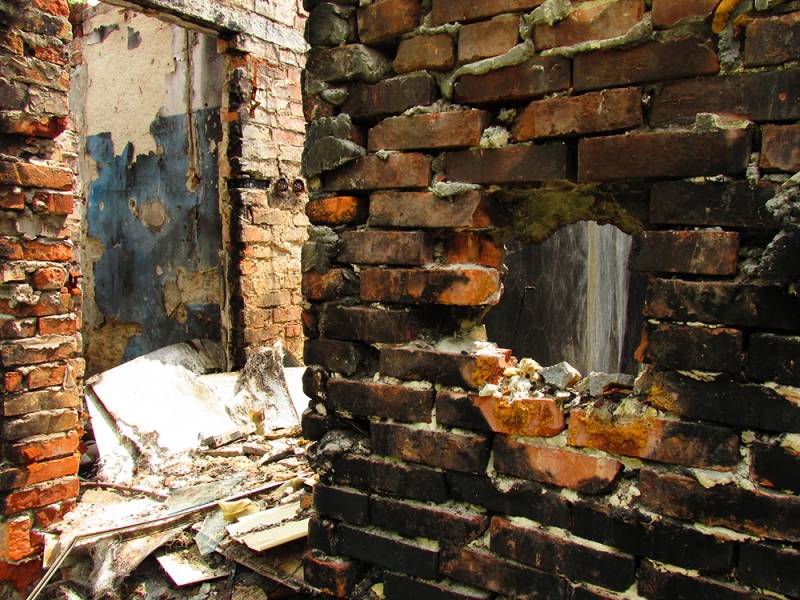 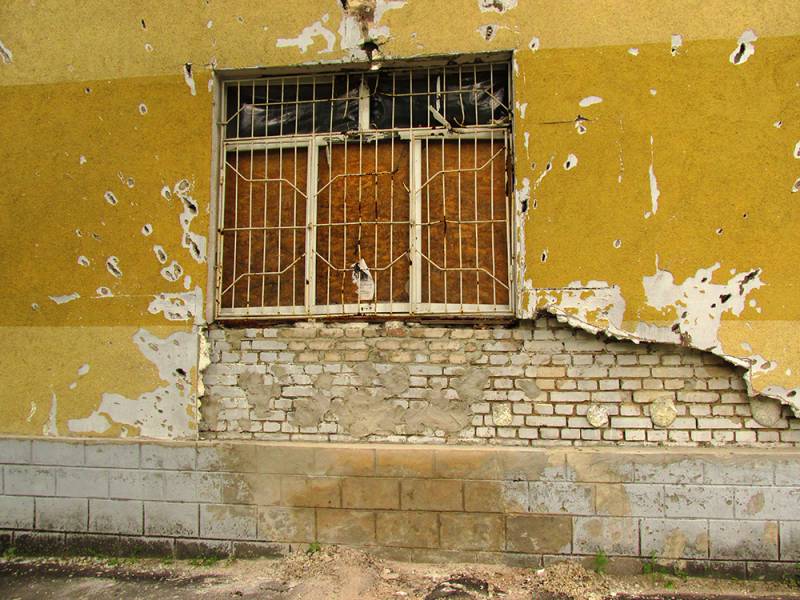 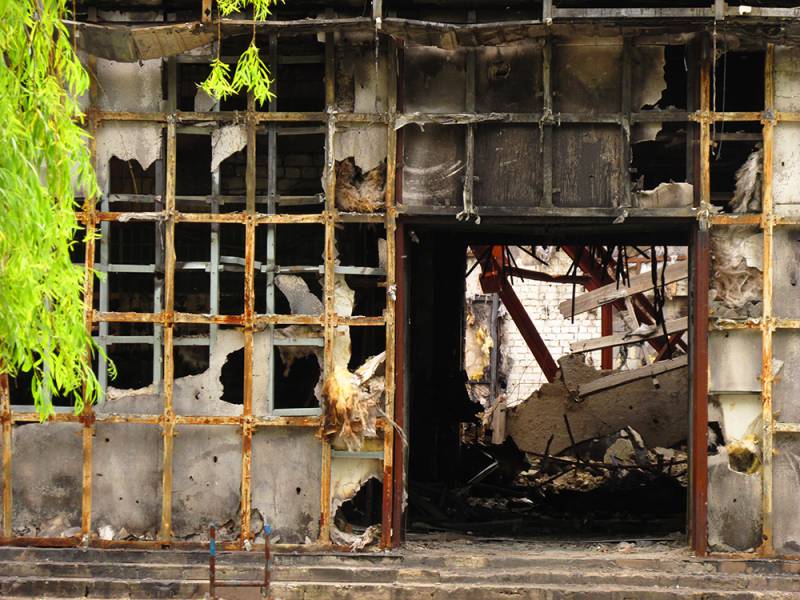 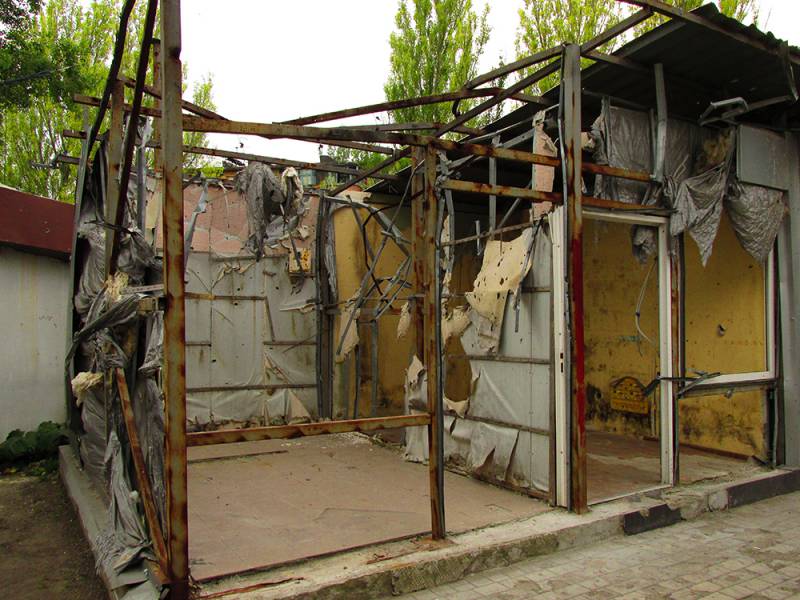 Despite this, a significant number of people - more than half a thousand - gathered at the opening of the memorial, in which the names of 212 people were carved. All of them are civilians who died as a result of the raids of the punitive troops of Mr. Poroshenko. The monument was erected on the initiative of the head of the Kuibyshev district, Ivan Prikhodko.

Olga Makeeva, Deputy Chairman of the People’s Council of Donetsk People’s Republic, addressed the audience with the following words: “Today is a tragic day. Two years ago, on the same day, war came to our house. She came on the wings of Ukrainian military aircraft. Residents of the village, looking at the sky, saw military planes and helicopters that bombed the airport and destroyed our village. But then we still could not even imagine what we have to go through. Ahead of us was the death of civilians. The death of loved ones, the death of children ... This is a sorrow that cannot be expressed in words. This is a pain that cannot be forgotten. Today we are opening a memorial. This is our duty to the lost. Our long - sacred honor the memory of them. And our duty is to pray for the repose of their bright souls. ”

Prikhodko and Makeeva removed the red cloth that covered the plates with the names. One of the parts of the memorial is dedicated to the dead children. 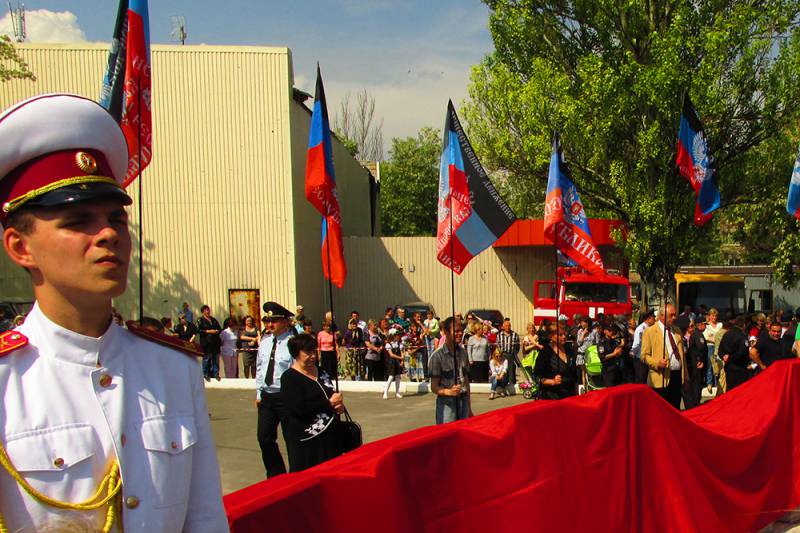 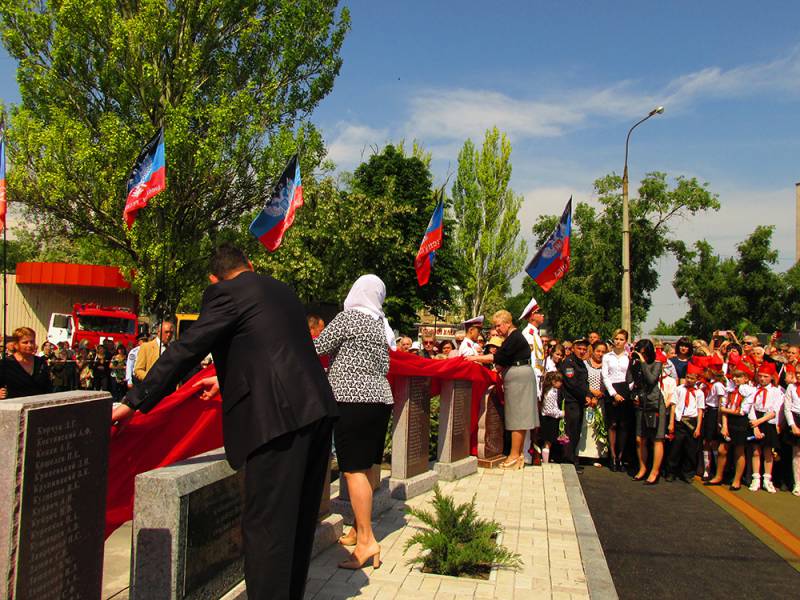 For the dead served a dirge. There was a small concert at which they sang songs and recited poems. In these works of art, created by the people - the pain of the experience, the bitterness of loss and the thirst for a long-awaited victory to come, and then peace in Donbas. 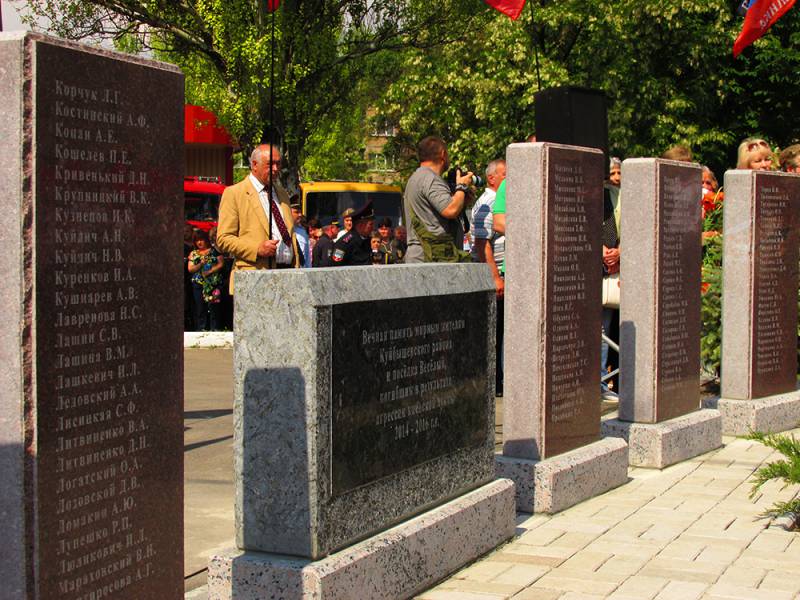 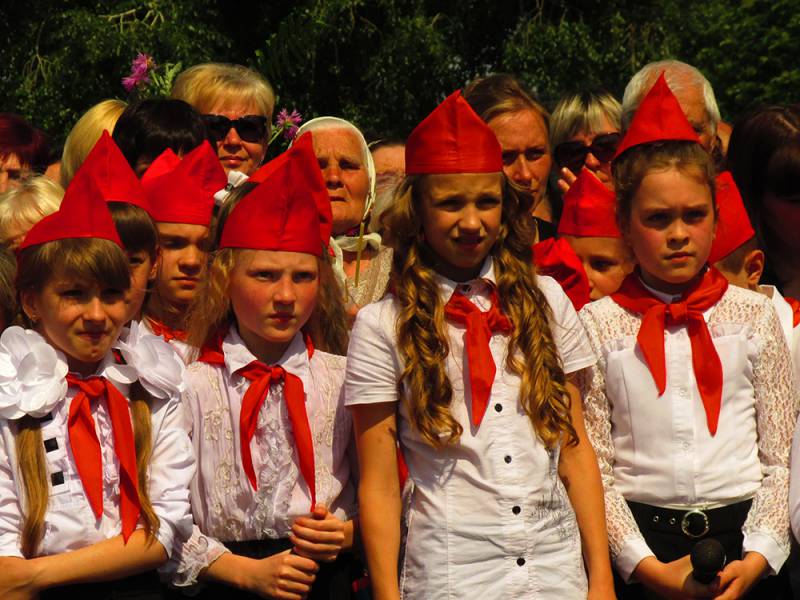 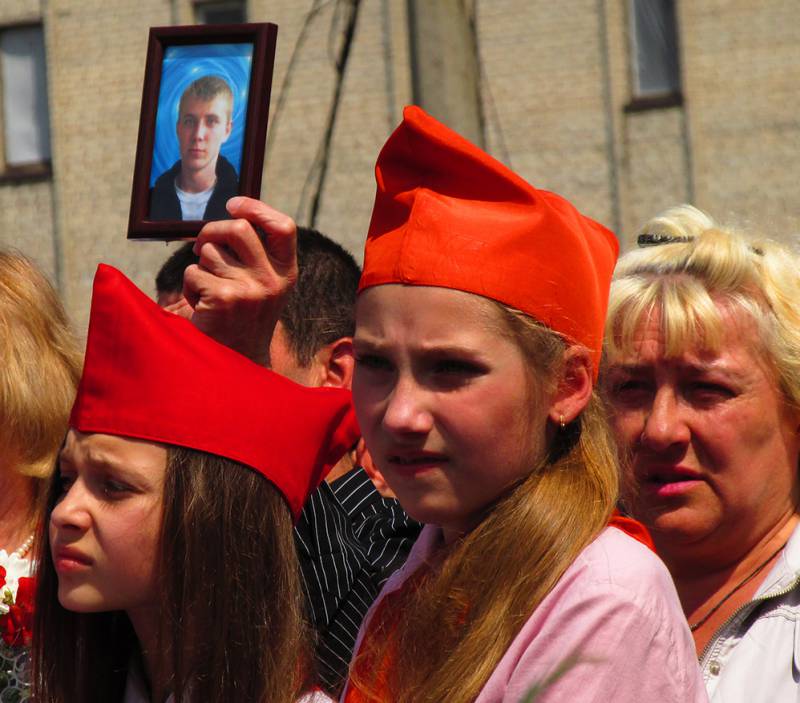 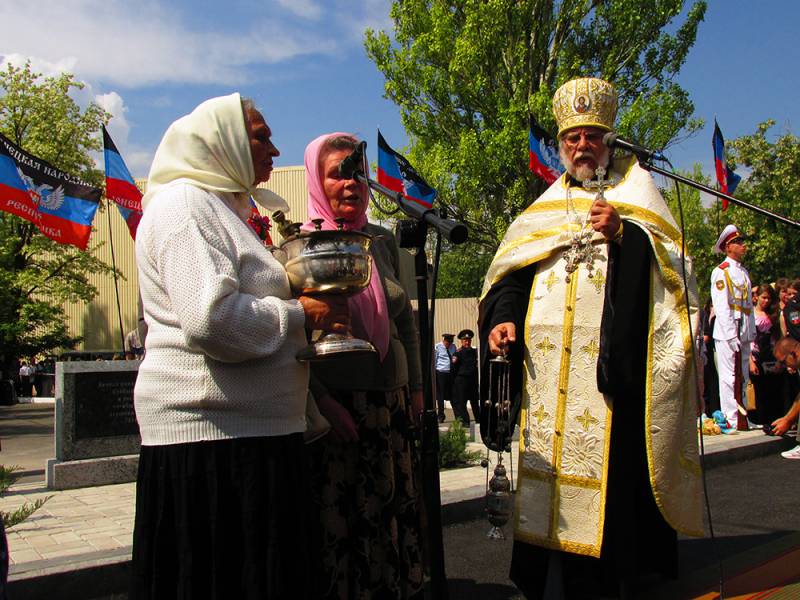 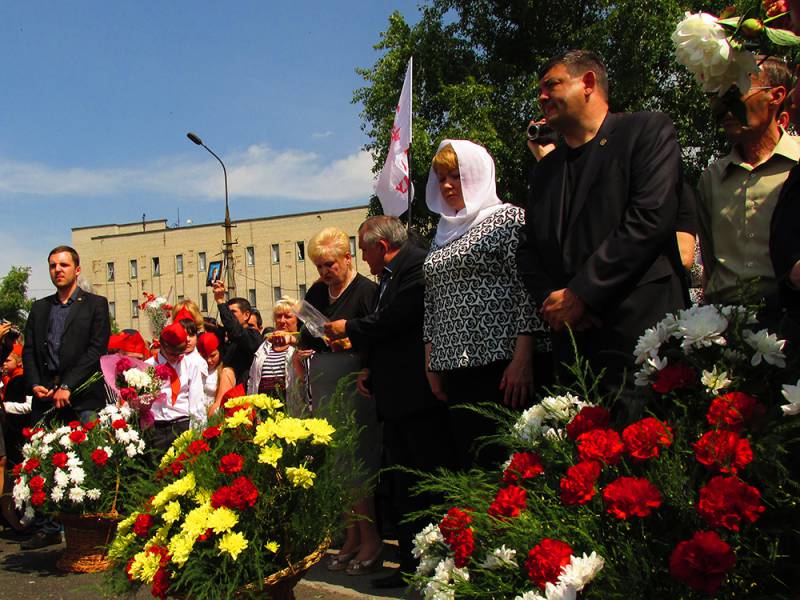 Many were crying. And some in their hands were portraits of dear dear people ... Some time after the opening of the memorial ended - it poured rain, as if God himself mourned the innocent victims of a criminal war. 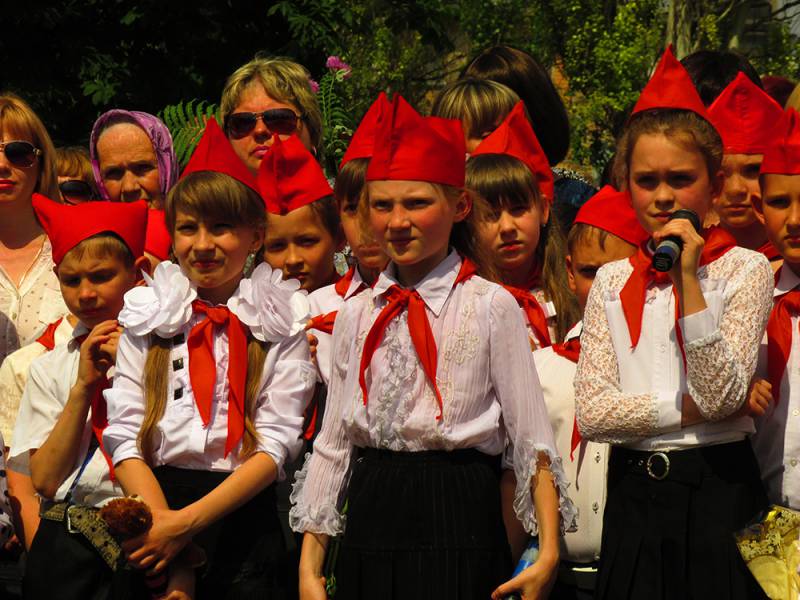 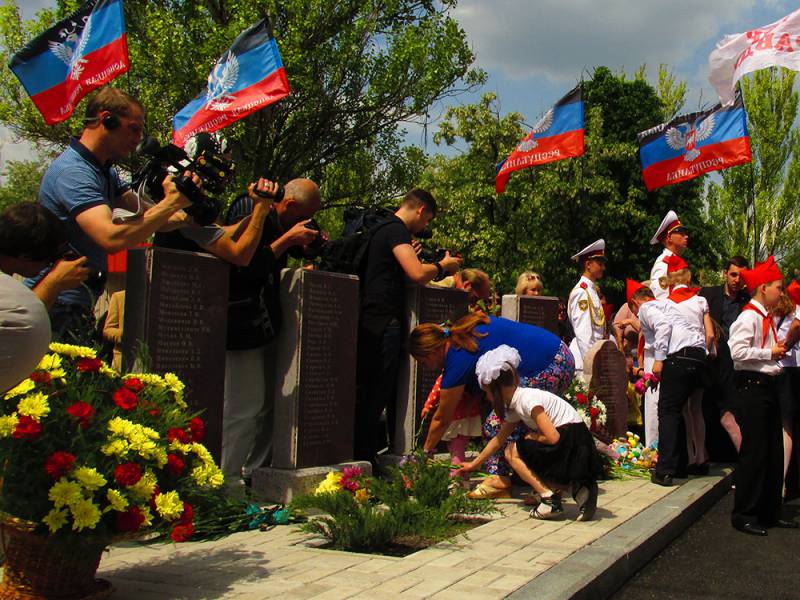 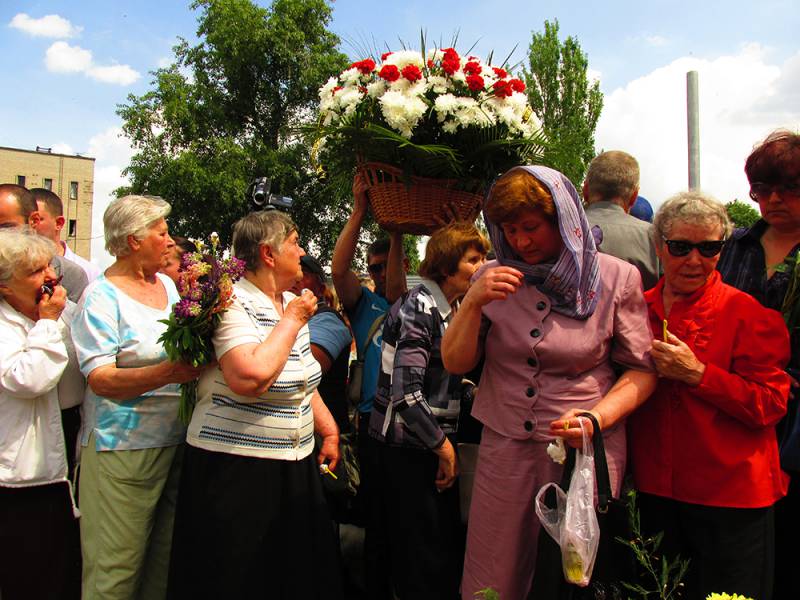 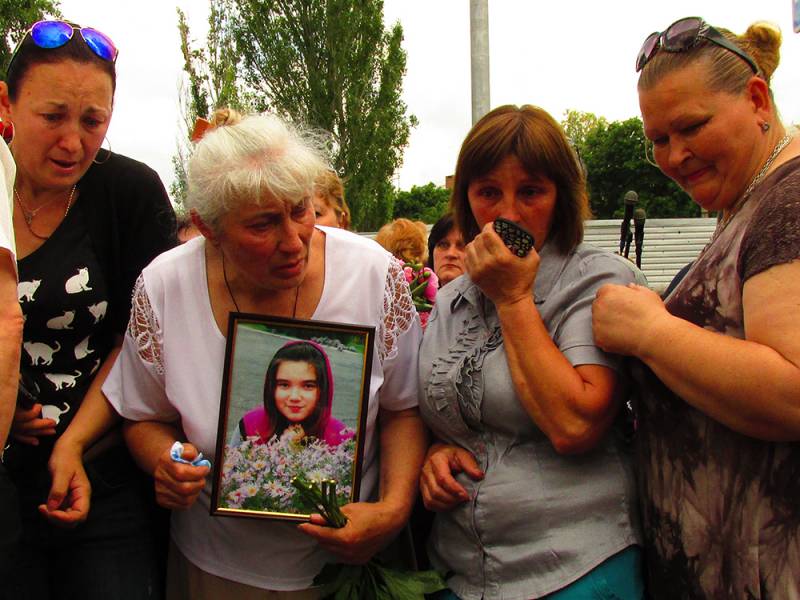 On the same day, May 26, other events dedicated to the tragic anniversary took place in Donetsk. A rally was held on Lenin Square (where I was not, as I chose to open a memorial in the village of Oktyabrsky), and in the evening the Union of Writers of the Republic held a poetic evening in memory of all who left.

The day before, on May 25, a memorial plaque was opened in Donetsk, dedicated to one of the guys who fell for Donetsk airport. Kurashov Maxim, 1992 year of birth. Orphan, studied at boarding school №1, not far from Bosse (also a memorable and iconic place in Donetsk, where in January 2015 was a shelling of a trolleybus).

The director of the boarding school, Olga Volkova, told about Maxim: “He was like all boys. He loved to learn, he loved to work, he loved to indulge, like all children. He also loved to play football ... The boarding school was a home for Maxim. He wanted to be a policeman. The guys who fought with him told that it was safe to go with him at least for reconnaissance. ”

Maxim Kurashov 13 october 2014, died near the airport. He tried to help his wounded comrade and was himself mortally wounded. 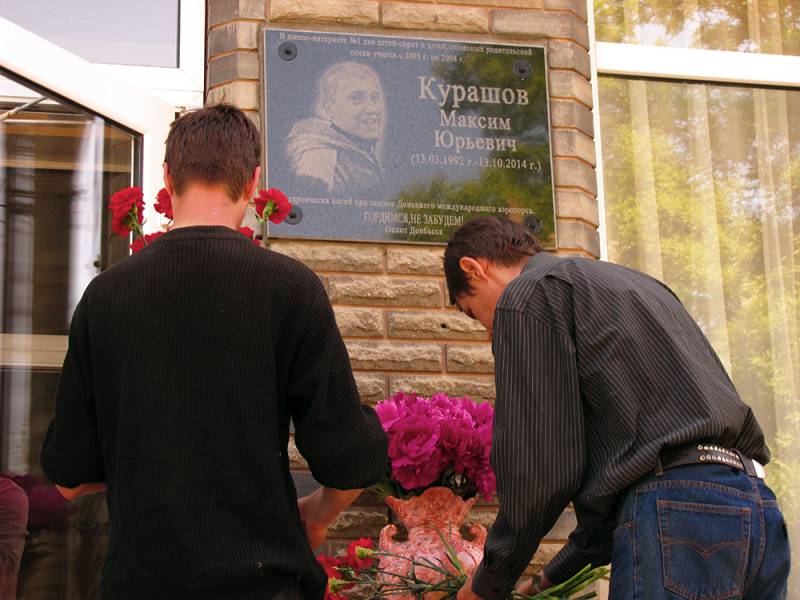 The director also described how the boarding school experienced its most terrible times. “Our school has also suffered. 24 August 2014, shells hit her territory. The corner of the sleeping building was broken, the football field suffered. But all this was subsequently repaired thanks to the people who put in our windows, thanks to the Recovery Center. And when there was an explosion on Bosse, the children were in the classroom. We went to the basement. We tried to distract the children so that they heard the explosions as little as possible. ” 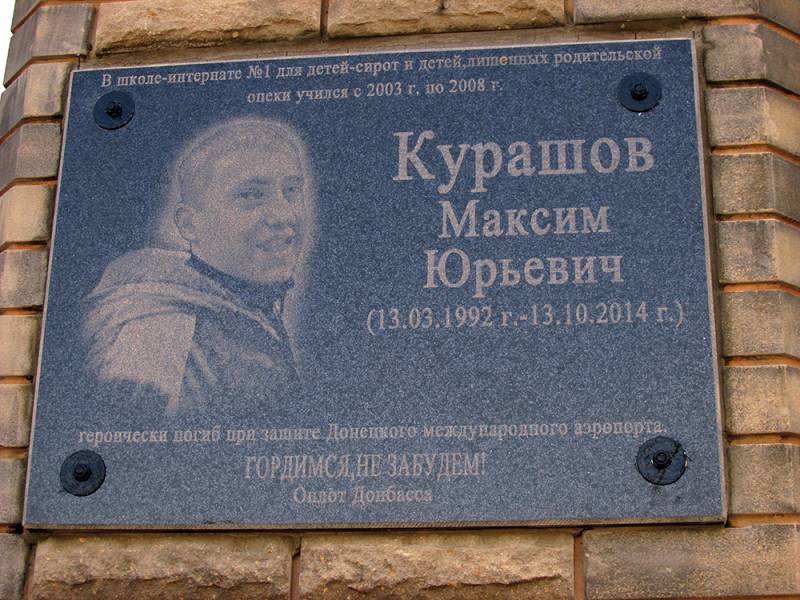 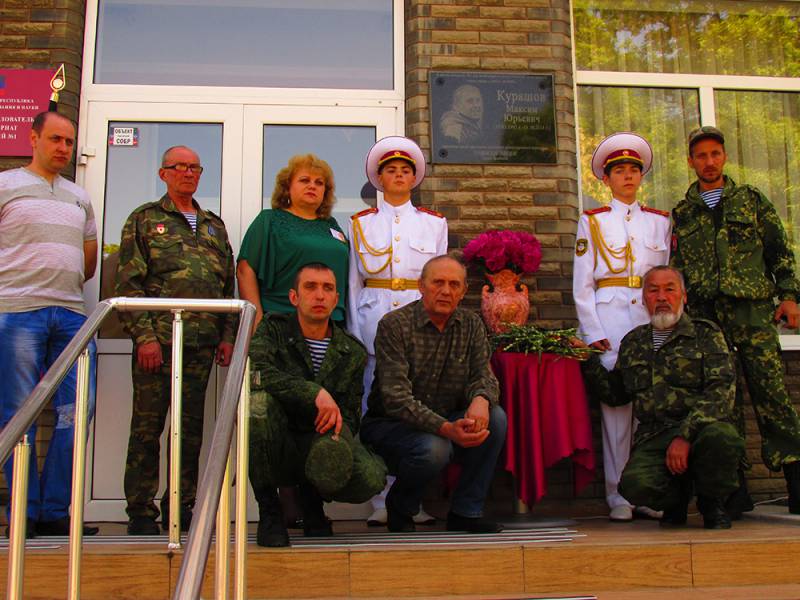 This is how Donetsk has been living for two years in the furnace of war. Among tears and pain, affected schools are being restored. Almost every day there are reports of new destroyed homes, of dead and injured people. And in the flowerbeds, famous Donetsk roses are starting to bloom, as if in memory of those who will never return.

Ctrl Enter
Noticed oshЫbku Highlight text and press. Ctrl + Enter
We are
Situational analysis of the death of the MH17 flight (Malaysian Boeing 777), made on the basis of engineering analysis from 15.08.2014Results of the week. “You are already indebted to the sea: neither the bottom nor the coast”
Military Reviewin Yandex News
Military Reviewin Google News
16 comments
Information
Dear reader, to leave comments on the publication, you must sign in.