27 May 2016
33
Recently, when it comes to unified combat platforms, first of all they mean new armored vehicles of the Kurganets-25 or Boomerang type, as well as the Armata heavy tracked platform. At the same time, lightweight military equipment is being created in Russia. As one of the most likely representatives of the light combat platform, today the family of all-wheel drive armored cars "Wolf" VPK-3927 is also considered.


The car was first shown to the general public back in 2010 year at the exhibition MVSV-2010. After that, she was shrouded by the scrutiny of media representatives, news the fact that armored cars of the family undergo certain tests appeared every year, but the matter is not really moving off the ground. Armored cars are still experienced, they are not accepted by the Russian army. At the same time, according to the Vestnik of Mordovia, in May 2016, the Wolf armored cars lit up at festivities in the city of Vyksa in the Nizhny Novgorod region, where the plant is engaged in the production of shells for various Russian armored vehicles, from armored personnel carriers to the air defense missile system.

Perhaps the Wolf III armored car will be chosen as the wheel chassis for the new 120-mm self-propelled 2-XNNXX Zauralets-D self-propelled gun, which, along with the tracked version built on the BMD-36M base, will replace the well-deserved, but already outdated SAU 4C2 "Nona-S". For the first time, this installation, which may be of interest to the Airborne Forces of Russia, appeared in a video about the results of the activities of the Nizhny Novgorod JSC Central Research Institute "Burevestnik" in the 9 year. It was there that for the first time the 2013-mm ACS was shown on the wheeled chassis (120х6) of the Wolf III, an armored vehicle VPK-6. As it was possible to judge, the 39373-mm gun of this artillery system was a modified swinging part of the 120-mm towed 120BX2 "Nona-B" gun. 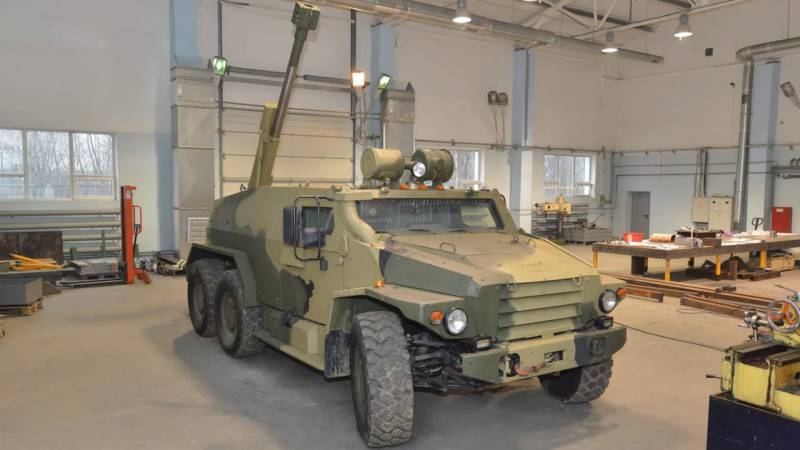 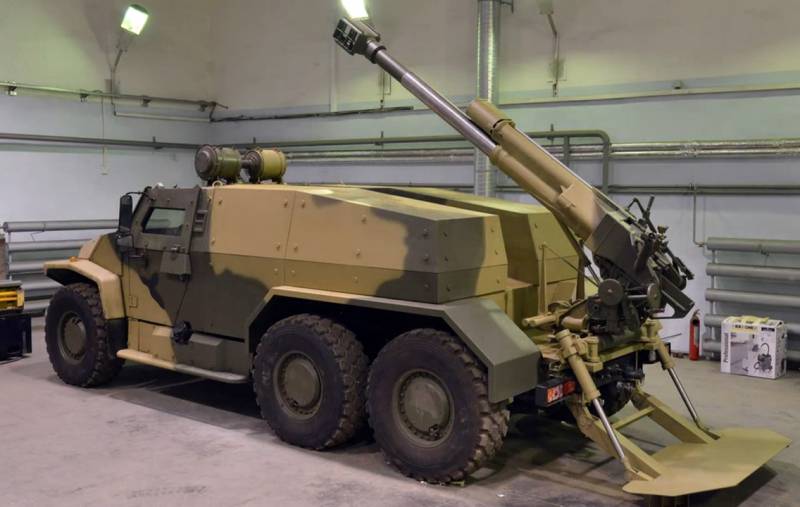 According to Russian experts, these machines in the army can be widely used, in addition to the task of transporting infantry or using them as a chassis for self-propelled guns, we can expect the appearance of armored vehicles with the installation of a variety of remote-controlled infantry and artillery modules, command and control, ambulance and truck vehicles . But this is only if the armored vehicle is really will be adopted by the Armed Forces of the Russian Federation.

The military-industrial complex-3927 "Wolf" is a family of modern multifunctional all-wheel drive army vehicles of increased security. The armored car is distinguished by the modular design, which is based on a fairly powerful frame. The realized concept of a modular design implies a wide versatility of an armored car and its high degree of unification with neighboring ruler models. The car is also distinguished by the presence of a permanent all-wheel drive with a lower near. The suspension of the car is completely independent, characterized by the presence of variable clearance (from 250 to 550 mm). Due to the variable stiffness of the suspension, the Wolf can travel over rough terrain with a fairly high speed - 50-55 km / h. At the same time, the corners of the overhangs - 45-55 degrees (depending on the position of the body) provide a good cross in off-road conditions.

The YaMZ-5347-20 diesel engine with a volume of 4,4 liters is used as the power plant on the armored vehicle. Depending on the modification, the power of this engine can be from 190 to 312 hp. The installed engine allows a fairly heavy armored vehicle to reach a maximum speed of up to 120 km / h. The car is quite well prepared to overcome obstacles, it can overcome water barriers up to 1,5 depth meter without the use of additional equipment and improvements, as well as trenches up to half a meter wide and various vertical obstacles 0,5 meter height. The average range of the car on the highway with full tanks is 1000 km. 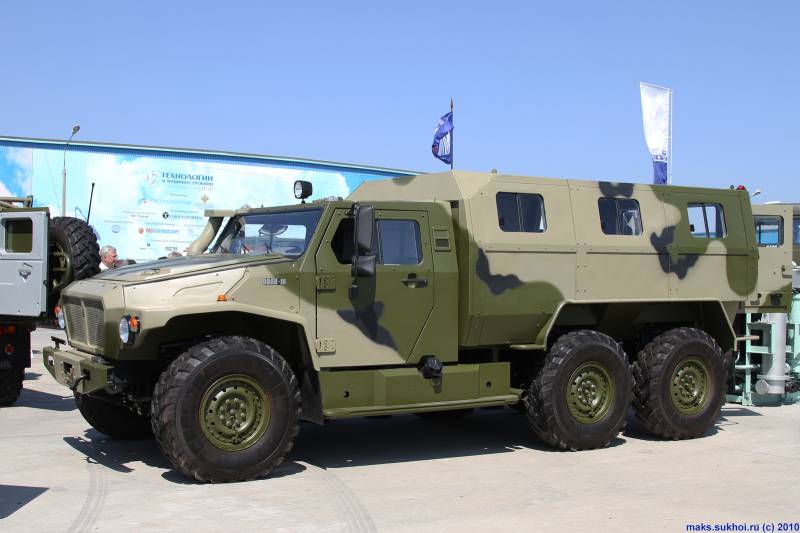 Initially, the developers of the military-industrial complex 3927 "Wolf" were planned 3 branches: armored, unarmored and civilian versions of the car. However, only armored versions are tested. In this case, the chassis of an armored car "Wolf" can be used to install various weapons systems: anti-tank systems, anti-aircraft systems of short-range, mortar fire systems, fire support weapons.

Innovative feature of all armored "Wolf" became BIUS - onboard information management system. It manages many units and units of an armored car: it monitors the temperature of the oil and coolant, tire pressure, ground clearance, etc. It is worth noting that this was the first experience of domestic manufacturers of military equipment in creating the most automated light-duty ground combat complex designed for installation on armored personnel carriers and cars.

According to Oleg Biryukov, sales director of AMZ (Arzamas Machine-Building Plant), pilot tests of various versions of the car were carried out in 2015 year. According to him, the armored car was created by the “Military-Industrial Company” by order of the Russian Ministry of Defense. The presence of a modular design allows you to install on the "Wolf" almost any target module, depending on the type of tasks that the machine will solve. A pneumatic suspension and adjustable ground clearance increase the performance of the car. According to Oleg Biryukov, the patency of the Volk armored vehicle is much higher than that of other cars of this class. 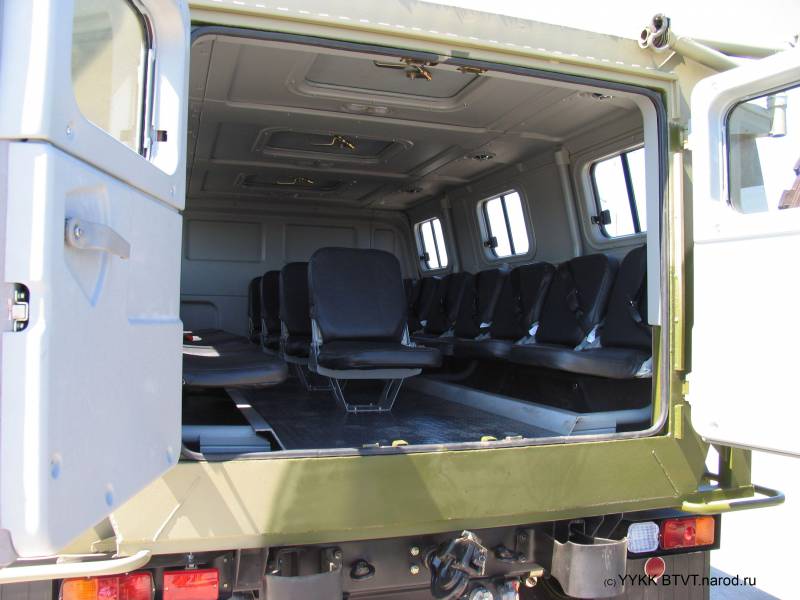 In addition, the "Wolf" is equipped with armor, which in its class of protection is higher than that of the currently used "Tiger" armored vehicles. Protection installed on the vehicle’s armor versions implies the presence of an anti-ballistic and anti-mine booking, which is carried out using special modular armor plates. The design of the car makes it easy to change damaged armored modules even in field conditions, and no special tools are required to replace them. Compared with its predecessors, the number of places for paratroopers was increased by 2 times in the new armored vehicle - to 20 places. Also an important feature was the ability to install a combat module depending on the need. Options with a combat module were designed exclusively for law enforcement agencies and the army.

It is also worth adding that the new Russian armored car, created by domestic engineers, is currently one of the first armored cars assembled only from components, parts and parts of Russian production. The main goal of the creators of the Volk family of cars was to develop a car designed for law enforcement agencies with a maximum level of unification between family cars built on the basis of the modular design principle, with a focus on the current and future Russian serial production. According to Alexei Kolchugin, the lead designer of the Wolf series, depending on the chosen configuration, these vehicles can be of general or special purpose: for various needs of special forces or conducting sabotage operations. At the same time on the armored car "Wolf" can be installed light artillery or heavy rifle weapons.

Initially, very high hopes are placed on the armored car. "The level of technology" Volkov "was dramatically increased compared with the" Tigers ", since a number of technologies implemented in Russia had simply not been used before," said Sergei Suvorov, press secretary of the Military Industrial Company (MIC). Among the new technologies, he singled out the hydropneumatic suspension of the car, the use of ceramic armor, the ability to book a car for 6-th protection class, the presence of an onboard information management system. Together, they take the “Wolf” armored car to a new level of development. 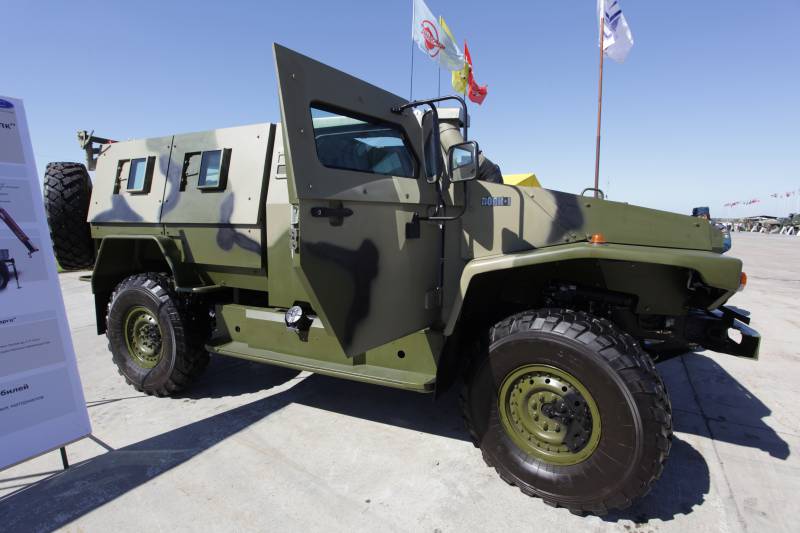 The armored car is presented today in four basic versions: MIC-3927 - the basic model of the “Wolf” family - a car (4 × 4) with a protected one-volume (7,2 m³) functional module. The internal volume of the cab (control module) for all other modifications of the armored vehicle is 2,4 m³.

VPK-39271 “Wolf-I” is a car (4 × 4) with a protected control module and a separate functional rear module (4,7 m³) designed for transporting personnel and installing various equipment with a given level of protection.

The military-industrial complex-39272 "Wolf-II" is a transport cargo truck (4 × 4) intended for the transport of personnel and cargoes with the possibility of installing various functional modules in the body. 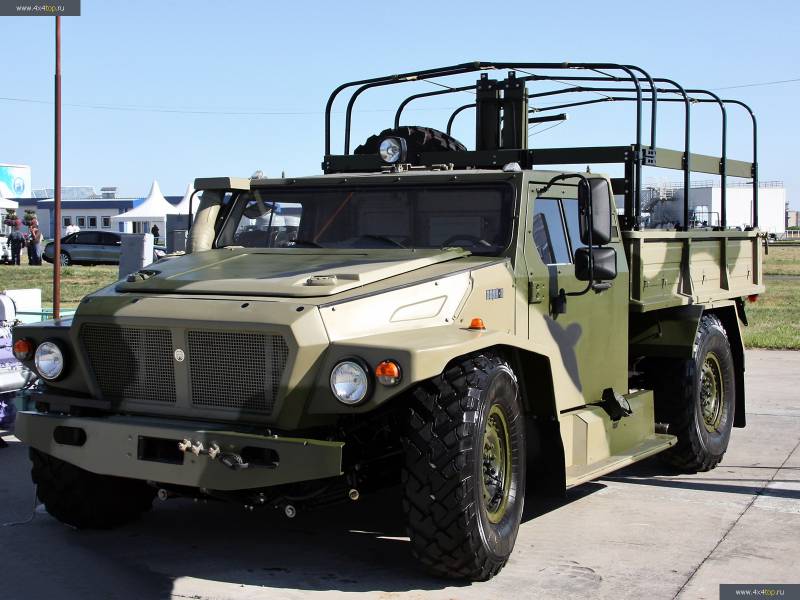