Does NATO have to win now?

27 May 2016
102
Practically every day, one or another politician, expert or specialist in international relations gives the press a recipe for our victory over the aggressive NATO bloc. Depending on the direction of the media recipes vary. From "letting us down" to "we will punch first, and they will shut up." And all the recipes give those who are not at all threatened to personally "embed". Those who will "analyze" and "criticize for wrong actions." 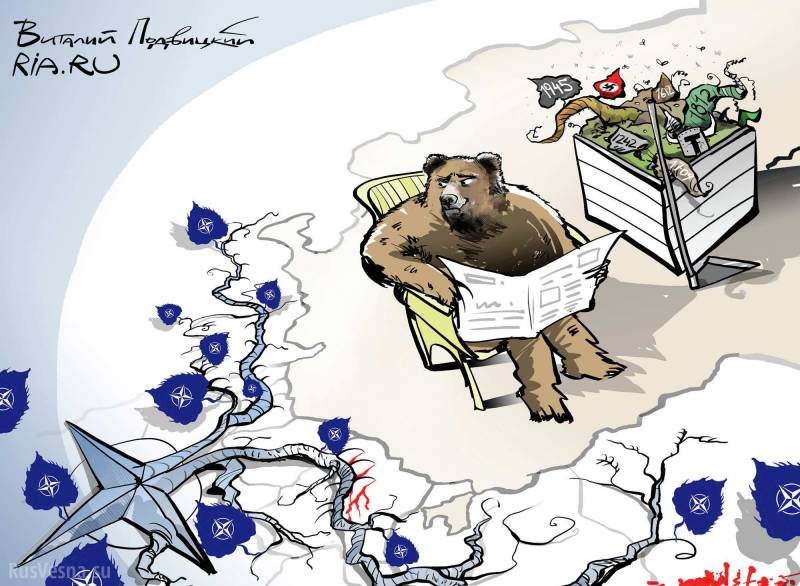 Indeed, NATO today is showing unprecedented "agility" a little earlier. They are building new bases near our borders, deploying troops in neighboring countries, are seeking to conclude treaties with non-NATO members on the possibility of using their territory in the event of hostilities. And all this against the background of real cooling to us.

Perfectly described the situation of our Minister of Foreign Affairs.

"We are not inclined to overly dramatize the situation. At the same time, we certainly cannot ignore the growing negative trends emerging as a result of the course taken by NATO to consciously undermine the strategic balance of forces in Europe, including strengthening the military potential of the North Atlantic alliance near the Russian borders, creating the European segment of the global US missile defense. "

Putin used to talk about his childhood. Including how to solve "patsansky" issues in the yard. I think that all of us remember our childhood. And fights for any reason. When it was enough to embed the leader’s insolent face, the conflict quickly faded. "Sweet" preferred to perform the role of extras. Finish the fallen or drape from the enemy in full force.

Many of the Euro-Atlantic “hawks” argue about the same today. NATO hopes that the main "fight" will be between the "leaders". And the rest will already come on the situation. Or finish off to grab your piece of "pie", or drape at full speed ...


Only this position does not pass today. No one will look for any opportunity to save the lives of citizens of countries in whose territory dangerous objects are located. Yes, and the density of the population of European countries today is such that any projectile will find "his" person. Military or civil, but will find. And it is very important that the Europeans understand this. Understood that the game with the troops and weapons in Europe threatens the personal safety of each person. A soldier or a tank near your home is a target. And the power of weapons today is such that by destroying this tank, they will also demolish the house ...

Tales about the fight against terrorism from American and European politicians and the military are no longer interesting to anyone. Already someone who, and Russia has a vast experience in the fight against terrorism. And for all offers of assistance from our side, we hear a rejection. So, they don’t really want to fight terrorists. Russia is more important to them - as the leader of "opponents of the United States."

What, in my opinion, is happening today? Why is the topic of NATO and US missile defense in Europe sounds most often in the European media? Why do we constantly hear the statements of the NATO Secretary General about the military threat to Europe from Russia?

Alas, we again "play up" NATO. Recall the NATO model of the beginning of 2000 ... At the most serious level, there was talk about the need for a bloc as such. Europeans who are able to count money talked about the extra costs of their countries. Quietly, without much pomp, they lowered the military budgets of the leading countries of the alliance. The “Yankees” also quietly behaved at military bases in Europe. Talked about the occupation of the EU by American troops.

The bloc was forced to justify its "need" with the search for enemies in Asia, Africa ... Everywhere, where at least it was possible to show its "power." It was then that NATO ideologists began to talk about the alliance as a kind of tool that could possibly go under the aegis of the UN. Such a ready-made military fist for the united nations. The fist with which they will "punch" UN decisions.

And suddenly everything changed. Europeans for some reason strongly strained in matters of their security. Why did it happen? But the reason really was and is.

The Europeans' confidence in their security after the operation, for example, in Yugoslavia was akin to Soviet pre-war confidence. "We will beat the enemy on its territory!". Our army is capable of any feat, and the enemies are weak. Because we are the most progressive country.

Absolutely the same mood was in Europe and the United States. Russia? Yes, we have already won it in the Cold War and put it on its knees. Russian army? Yes, she is demoralized and practically defeated by Chechen gangsters. And the technology that remained from the USSR has long since worked all imaginable and inconceivable terms. Rockets? And who said that they all take off?

China? Where is it? This is where old American and European technologies are being stolen, and computers that illiterate, hungry peasants gather in basements ... Is this where communism is still being built? The USSR collapsed, and China collapsed.

Who else is there? Everybody there is India, Pakistan, and other Iran ... Third World countries. Finger crush. And all sorts of Brazil and other Latinos in general in our pocket.

The first "bell", which, however, not everyone understood, struck 08.08.08. Then, when the Russian army "demoralized and armed with the old Soviet rubbish" not only successfully stopped the Georgian army prepared by the Americans, but could have seized the whole of Georgia, received such an order. And for the victory did not even need to transfer huge forces.

Further Crimea. Masterly operation. The operation, which showed not only the ability of the Russian army, but also the ability of Russian diplomacy. Carefully, without firing neutralize an equal in number army is worth a lot.

And if you add to the Russian "headache" more Chinese, Indian, Brazilian ... A lot of these "pains" are now among the Europeans. And it turns out that the "blue dream" of a world where Europeans are "chosen ones" simply because they can punish any country has burst. It turned out that the Chinese "from the basement" went into modern workshops and built their own spaceships, their own planes, their own tanks. And not inferior to European and American.

The settled myths about European exclusivity burst. The Europeans saw that the armies of European countries had long been turned into "toy" ones. It's one thing to bomb those who cannot, because of weakness, respond. Another thing to meet with the army, which knows how to fight.

NATO today is so menacingly "meowing" because the state of European society has changed. Europe is afraid of those who have not recently been considered to be equal people. NATO has a second wind. Means there is. Any plans to deploy troops pass with a bang. The main thing to tell about the threat.

Need a base in Poland? Immediately there is a series of stuffing about Putin’s plans to seize Bonn, Paris and Lisbon. And that's all. The base is our response to aggressive plans.

Need a base in Turkey? Other stuffing. Russia is going to deploy nuclear weapons in Armenia! And it will be aimed at southern Europe. Everything. Panic - and the base is worth it.

I think it is worth a little slow down. Deploying new connections is certainly a way to neutralize NATO. But maybe it's worth a little to speed up the modernization of the army? Maybe it is worth instead of increasing the number to invest in the development and production of new types of weapons?

After all, all our leaders, from the president to the types of commanders of the Armed Forces, have repeatedly spoken about the adequacy of forces and means for an adequate response. Just somehow I remembered the reaction of one not very friendly state after the downed plane. Reactions to the appearance in Syria of normal air defense and Su-35. Immediately somehow they stopped flying, they began to wave their fists from their territory.

I think in Europe in the same way the tanks “will laughed” along the borders and modernize the airfields, if opposite are the “Armaty” and the T-50 ... Or something else that we can only guess.

Migrants and sanctions are doing their job. And they also play on the side of Russia. If a person is accustomed to “eat well,” he will never want to share with another if he becomes “eat worse.” And the deployment of new NATO units, the deployment of new military facilities in European countries, the problems of migrants and the sanctions against Russia serve precisely the "slimming" of the European wallet.

From here, it seems to me, the change in the political map of Europe in the near future is quite real. See what's going on in France. And such a change in the political alignment of forces will change the strategy of NATO. It may happen that we will again expand the number, and then we will reduce. Tear human destiny, as it was at the end of the last century.

And finish the article is again a quote from Lavrov. Smart man quote a pleasure.

"We hope that common sense will ultimately prevail in NATO, and our Western partners will find the strength to refuse to build confrontational schemes, determined by the desire to ensure their own security at the expense of others."

Ctrl Enter
Noticed oshЫbku Highlight text and press. Ctrl + Enter
We are
Rozhava - the land of the Soviets. How do Syrian Kurds fight and build a new world?Memo to mercenaries in Africa
Military Reviewin Yandex News
Military Reviewin Google News
102 comments
Information
Dear reader, to leave comments on the publication, you must sign in.