30 May 2016
6
The German light tank Pz.Kpfw.II was created and put into service in the mid-thirties. Immediately after completing the tests of the first version of this machine, the development of new variants started. Subsequently, the development of the project continued and led to the emergence of new modifications of the armored vehicle, which differed from the basic version by this or that design feature. One of the most interesting versions of the development of the Panzerkampfwagen II was the VK 901 project.


Work on a new project to upgrade existing tank began in the summer of 1938, in accordance with the contract of June 18. The Wehrmacht ordered the development of a new version of existing equipment with the subsequent construction of machines of the first batch. Contractors for the new order were MAN and Daimler-Benz. The first was to create an updated chassis, and the second was responsible for the development of the turret and weapons complex. It was required to create a light tank with a combat weight of about 9-10 tons, intended for reconnaissance and battle. The promising vehicle received the designation VK 901. In addition, in connection with the development of the tank based on existing equipment, the designation Pz.Kpfw.II Ausf.G.

For some reasons, it was decided to abandon some of the main features of the basic design, having developed part of the aggregates of the new machine from scratch, taking into account the new technical requirements. As a result of such changes in the appearance of the machine, engineers had to re-develop the armored body, turret, chassis, etc. The overall layout, approach to security and some other features of the project remained unchanged. 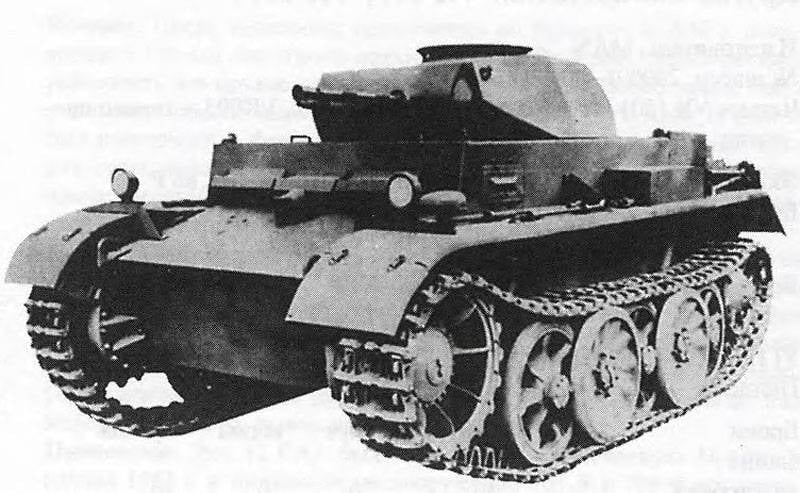 When creating the hull, it was decided to retain the existing layout with the front of the transmission, habitable compartments in the center and aft engine compartment. Also in general, the basic parameters of the reservation remained. VK 901, as late modifications of the Pz.Kpfw.II, was to receive frontal armor with a thickness of 30 mm, as well as 15-mm side and aft. The thickness of the roof and the bottom of the hull should have reached 20 mm.

The form of the armored hull of the new machine was based on existing developments, but it was noticeably different from them. The frontal part of the body was formed by three sheets of different sizes, installed at different angles to the vertical. To enhance the armor, it was decided not to make hatches to service the transmission in the middle of the inclined parts of the forehead. In the upper sheet of a small height, there are two inspection hatches with armored gates.

The hull received boards of complex shape. Their lower part was installed with the collapse outward, and the upper one formed the sides of the superstructure, which performs the functions of a sub-turret box. A similar superstructure was present along the entire length of the hull behind the front sheets. The hull received a horizontal roof with a small section in the stern, set with a backward slope.

According to reports, the VK 901 tanks could be equipped with carburetor engines of various types. In particular, the Maybach HL 45 hp 150 products were considered. and HL 66P horsepower 180 With the help of a mechanical transmission based on a five-speed gearbox, engine torque was to be transmitted to the front drive wheels.

As part of the new project, it was decided to abandon the existing chassis of the tank Pz.Kpfw.II. Instead, it used a new design with the use of other units. The new tank was to receive five large-diameter road wheels on each side, installed in a staggered manner. The outer row at the same time consisted of two rollers, internal - of three. It was proposed to equip the rollers with an individual torsion suspension. In front of the hull were placed the driving wheels, in the stern - guides. Driving wheels were installed with a greater excess over the rollers than the guides. Due to the large diameter of the rollers, the upper branch of the fine track caterpillar did not need support rollers.

Especially for the new tank VK 901 company Daimler-Benz has developed a tower with weapons. The design of the tower was based on the existing developments, but had some differences from the existing products. The traditional design for German tanks of that time was used with straight frontal and cheekbone sheets, as well as a curved part that performs the functions of the sides and the stern. The roof, respectively, consisted of two armor plates. The frontal parts of the tower and the mask had a thickness of 30 mm, the other sheets were twice as thin.

In the framework of the new project, the problem of increasing the level of tower defense was solved in an interesting way. It was decided to leave the armor plates of the turret unchanged, but not to equip them with viewing devices. The need to use small hatches in the sides and stern was the subject of controversy, and their exclusion made it possible not to weaken the design of the armor. As a result, it was decided to use a different set of instruments for monitoring. It was now suggested to monitor the situation with the help of a low commander's turret with periscope instruments.

The main armament of the VK 901 tank was to be the 20-mm KwK 38 L / 55 automatic cannon. Depending on the type of projectile used, the initial speed at the level of 750-850 m / s was ensured, which allowed penetrating the order of 20 mm of armor from the 100 distance m. Guidance weapons was to be carried out with a sight of the type TZF10. 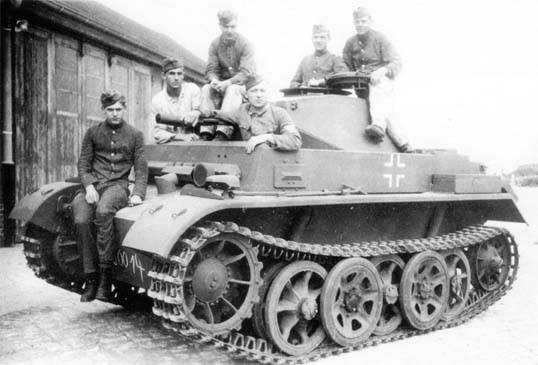 Also considered another option for weapons tank. Instead of the 20-mm automatic cannon, it was proposed to use the Mauser EW 141 self-loading anti-tank gun. Using the 7,92x95 mm “318” cartridge, this weapon could pierce up to 25 mm armor when fired from the 100 distance. The second weapon variant of the tank with an anti-tank gun also implied the use of a coaxial machine gun.

To manage a new reconnaissance tank was supposed to crew of three. The driver and radio operator were placed in front of the hull. For landing on their seats, they had to use the hatches in the roof of the hull. It was proposed to monitor the situation and the road with two hatches in the front hull plate and two in the sides. The driver had a workplace equipped with an instrument panel with control devices and a set of control levers. In place of the radio operator it was planned to install the radio station FuG 2. The workplace of the commander-gunner was placed in a single tower. The commander could use the hatch in a small turret and inspect the surrounding space with a set of periscopes.

The new tank VK 901 turned out to be relatively compact, however, it was not possible to meet the demands for combat weight. The car with fuel, ammunition and crew had to weigh about 10,5 m. The length of the tank was 4,24 m. Width — 2,38 m, height — 2,05 m. Calculations showed that the armored vehicle could reach speeds of 50 km / h .

The contract from 18 June 1938 of the year stipulated the development of the project with the subsequent construction of the prototype, its testing and assembly of a batch of 75 pre-production machines. Firms of the VK 901 project developers were loaded with other works, because of which the creation of a new reconnaissance tank was delayed. The same happened with the assembly of the experienced car. The first prototype of VK 901 / Pz.Kpfw.II Ausf.G could be completed only at the very end of 1939 of the year. Soon the car was sent for testing. 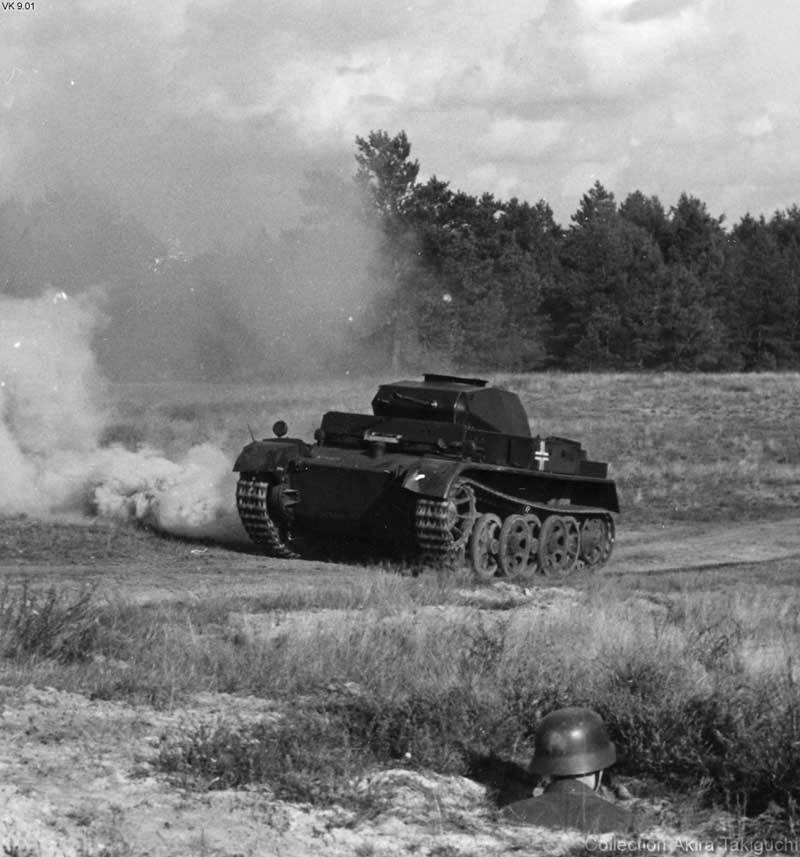 The tank is on trial. Photo Aviarmor.net

Experienced VK 901 coped with the tests, although it was not without claims from the customer. After checks, the military began to analyze the project and determine its prospects. At the same time, the contractors continued to assemble the required equipment. Interestingly, the company Daimler-Benz ahead of colleagues on the pace of assembly of its products. As a result, the release of towers for pre-production tanks exceeded the production of new chassis.

According to reports, in the 1940-41 years, two companies built 11 tanks of a new type. According to some sources, the assembly of this equipment was started only in the 1941 year by special order, and it was intended for military tests. Anyway, the total production of VK tanks 901 was limited to 12 machines, which passed the necessary checks and were transferred to the army.

Some sources mention that during the production of 11 tanks VK 901 the project underwent some changes, expressed in the use of new systems and design modifications. As a result, a batch of 12 machines is often divided into three conditional series: Pz.Kpfw.II Ausf.G1, G2 and G3. According to some information, the cars of different series, despite the small number, differed in armament and engine types. So, the most powerful 180-strong Maybach HL 66P engine was installed only on the latest tanks version Ausf.G3.

Some sources claim that in the second half of 1941, VK tanks 901 / Pz.Kpfw.II Ausf.G were transferred to the troops for verification in a real war. Other sources, however, do not cite such information and note that the data on the use of this technique by the troops is simply not available. However, any details of the military tests VK 901 missing. Probably, these machines showed characteristics and potential at the level of the serial Panzerkampfwagen II and therefore could not convince the command of the need to place new orders for production.

The fate of 12 reconnaissance tanks is unknown. There are unconfirmed data on the use of this technology for a long time. Some VK 901 tanks could remain in the troops until the 1944 year. In the future, this technique either died on the battlefield, or was dismantled as useless.

One of the towers used as stationary firing points. Photo Aviarmor.net

As already mentioned, the company Daimler-Benz, which was responsible for the production of towers with weapons, was ahead of its colleagues from MAN in terms of production rates in the framework of the VK 901 project. As a result, at the time of the termination of the construction of new tanks, 50 turrets were assembled with sighting equipment and cannon-machine gun weapons. 12 such products installed on the tanks, while the rest, due to the cessation of work, remained out of work. However, unnecessary towers found use.

Tank towers were transferred to the builders of the fortifications of the Atlantic Wall. These products were proposed to be used as long-term firing points. 27 towers were sent for use in the fortifications of France and Germany, another 11 towers were installed in Denmark. After the opening of the Second Front, these systems were used to protect against the advancing forces of the enemy, but the relatively low firepower of the available weapons did not allow to count on effective counteraction to the advancing troops.

Most of the towers of the VK 901 tanks involved in the construction of the fortifications were destroyed during the war. Until the end of the fighting were able to survive only a few similar firing points. For example, one of the towers was an element of protection of the West Olberg airfield. After the war, the tower was not dismantled, which is why it remained in its place until the end of the nineties.

During the tests, light reconnaissance tank VK 901 / Pz.Kpfw.II Ausf.G could not interest the military, which led to a sharp reduction in the order for the construction of pre-production equipment. In the future, new cars could get to the front, but there did not show any outstanding results. As a result, the next project added to the list of unpromising developments. However, the developments on the new tank are not lost. In the future, some ideas of the VK 901 project were used to create new armored vehicles.