26 May 2016
84
TV channel 112 Ukraine reports that Nadezhda Savchenko, who has returned to Kiev, in respect of which the Russian president signed a decree on pardon the day before, intends to join the Verkhovna Rada Committee on National Security and Defense. This information appeared after the statement of the People's Deputy of the Verkhovna Rada from the “Fatherland” Ivan Krulko. 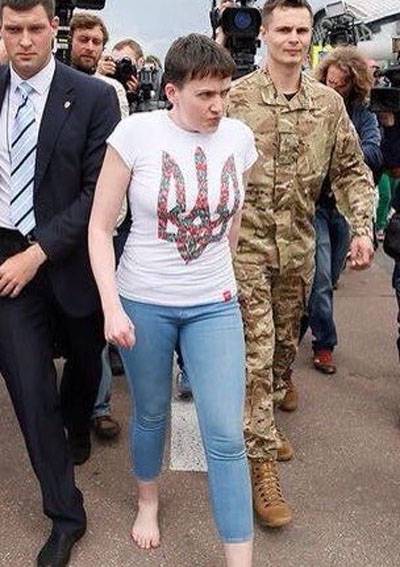 From the statement of the deputy for the Ukrainian media:
Immediately after the meeting in the presidential administration, Savchenko went to meet with the faction, with Yulia Tymoshenko. We had a very warm conversation (...) Nadezhda is a team player, and today she confirmed that she is an integral member of the "Batkivschyna" team, that she will work in parliament, asked for help from everyone so that she can enter the new for her political, parliamentary work. She will be a member of the National Security and Defense Committee. I think her voice will be very weighty there.

The formula is simple: to become a member of the Verkhovna Rada Committee on National Security and Defense, a Ukrainian citizen must take part in the murder of journalists and other civilians ...

Thus, the number of criminals in the Verkhovna Rada is increasing, and this fact does not bother any organization that calls itself human rights.