The Crimean Way of Texas

27 May 2016
113
The Texas Nationalist Movement (TND, English Texas Nationalist Movement, TNM) announced that it has received the right to hold a referendum on the independence of the state from the United States. This was announced by Life.ru. Local Republicans got their rights: two thirds of the committee of the local branch of the Republican Party approved the corresponding bill. Movement spokesman Nathan Smith said firmly: "The people have the right to self-determination." Is it really coming to America in its "Crimea"? 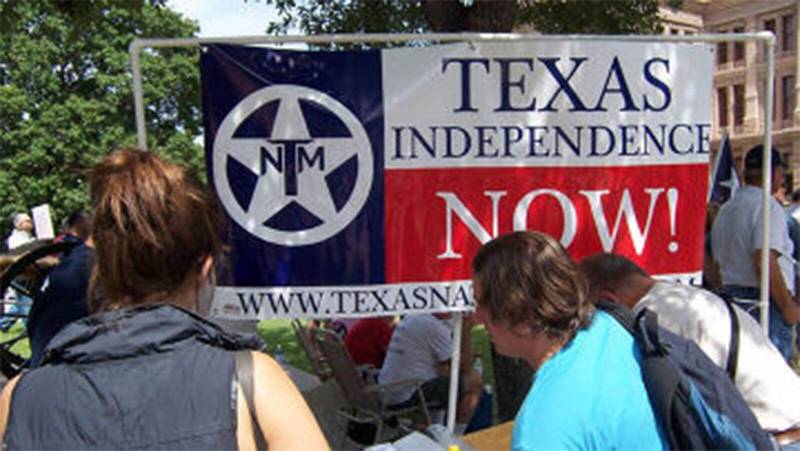 According to "Life"The TND "won the battle" for the right to hold a referendum on independence from the United States. Two-thirds of the committee of the local Republican Party voted in favor of the referendum.

"Life" received information from the original source - a representative of the TND Nathan Smith.

“People have the right to self-determination,” Mr. Smith said. “People have to choose the form of government for their region themselves, we really hope that the people of Texas will soon decide whether to remain part of the United States or gain independence.”

The state legislature must now pass a bill that allows for a nationwide vote among Texans on the issue.

Some experts believe that, if this happens, then the matter can go “according to the Crimean scenario”: in Crimea, the citizens themselves decided whether to remain part of the peninsula as part of Ukraine, or join Russia.

Mr Smith also said that in the case of a state branch, Russia would receive a new trading partner.

The journal was explained by a lawyer, Fyodor Kozlov, practicing in Chicago. He recalled that each state has its own constitution. As part of its Texas can really hold a referendum at the local level.

However, the decision of the voters concerns the integrity of the United States. Therefore, after the referendum, Texans should bring the issue to the federal level.

“The draft law concerning the separation of Texas from the United States should be put forward by the local authorities for consideration by the Senate,” the expert specified. “I am sure that this project will not go to Congress: separation of Texas will harm the integrity of the country.”

According to Kozlov, there is more freedom in this area in the CIS countries: “According to the results of the voting in the Crimea, the region joined Russia, because the majority of citizens voted for it.” In Texas, if people vote for independence, the federal authorities will not take this into account: after all, state independence must be approved at the federal level.

Many Texans today claim, indicates the publication that America in the past committed an act of illegal annexation against Texas. And this means that the territory is under US occupation.

How promising are the TND goals? About it Pravde.ru told the doctor of political sciences, professor of Moscow State University Andrei Manoilo.

“If Texas will hold a referendum on the separation of the United States on the Crimean scenario, this means that it will first have to declare independence ...” said the expert to the publication. - But seriously, Texas will definitely hold a referendum right now, when the presidential election campaign in the United States is actively underway, and its outcome is not obvious. Now there is not enough support for Clinton or Republican candidates. Trump alone remained there ... And in this regard, various political forces, including in Texas, are very good at keeping their nose in the wind, and they are well aware that right now any of these parties can pay a very high price for their support ... "

And if all the same, Texas will hold a referendum, then it may well be that more than half of the Texans will vote for the withdrawal: today, 30% of Texans support the separatist movement. “Imagine what kind of dividends a presidential candidate can receive if he agrees with Texas and persuades him after this referendum or on the eve of this referendum not to leave the United States,” the expert noted. - That is, it will prevent the collapse of the United States. This will sharply allow any candidate to get ahead, win the presidential race thanks to this factor, and Texas will receive regular benefits and preferences, while remaining in the United States. ”

Journal "Time" cited some data on the activity of the Texas separatists in recent years.

The decision of the Republicans about the referendum is an important step forward for TND activists who have long dreamed of separating their staff from the United States.

The movement reported an increase in the number of its members by 400% after the elections of the 2012 year. Also, the separatists recalled that more than 100.000 people signed a petition to the White House on the site Change.org for the separation of Texas.

However, while Texas "is not moving anywhere," reports CNN from Dallas. However, the very fact of the last decision of local activists causes a great surprise: after all, the TND, which ten years earlier was a rather modest movement, now becomes the spokesman for the "mainstream".

The movement is headed by President Daniel Miller. He told reporters that the TND really wants state independence. “This is not some kind of contrived idea,” he said, adding that the people “have the right to self-determination.”

Also, Mr. Miller compared the idea of ​​secession of Texas and a referendum on the independence of Scotland, held there in 2014 year.

According to Miller, for Texans it is very important to have the right to vote on this issue. Especially since the popularity of this idea has greatly increased since its formulation of 10 years ago.

Miller told CNN that he plans to continue the fight for secession and that what is being done today is just the beginning. He and his movement are optimistic and experiencing "joy."

Observed and commented on Oleg Chuvakin
- especially for topwar.ru
Ctrl Enter
Noticed oshЫbku Highlight text and press. Ctrl + Enter
We are
Results of the week. "We did not study at universities .."Unreliable States of America
Military Reviewin Yandex News
Military Reviewin Google News
113 comments
Information
Dear reader, to leave comments on the publication, you must sign in.