The legendary weapon of security officers and "commissars in dusty helmets", an automatic self-loading pistol of the German company "Mauser", was invented a quarter of a century before the revolution, in the 1893, by the designers the Federle brothers. It was supplied with a wooden walnut holster, which could also be used as a stock. The Mauser had a powerful cartridge, a movable sight, and, in the presence of a holster-butt, was even used as a lightweight carbine for shooting at a distance of up to a kilometer. However, at the maximum distance, the dispersion of bullets was 4-5 meters in width and height. But for one hundred meters “Mauser” beat exactly in the 30 centimeter circle. 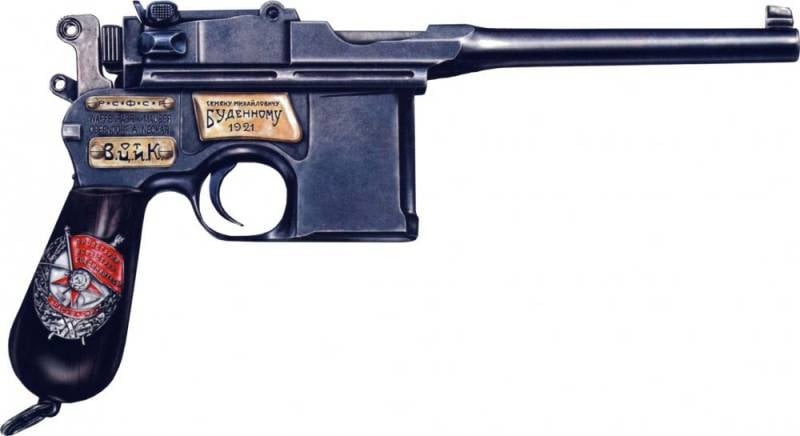 Patented the gun in the 1896 year (model C-96), and a year later it began mass production. "Mauzers" quickly gained popularity around the world (especially among hunters and travelers) and withstood over two dozen modifications (including a different cartridge, the 1912 model of the year received the most prominence). One of the later modifications made it possible to fire bursts at speeds of 850 per minute. By the beginning of the First World War, several tens of thousands of pistols were fired. And they received their baptism of fire during the Anglo-Boer War 1899-1902.

Paradoxically, the popular pistol was not officially adopted in any of the countries of the world. While its production continued until the 1939 year, and was released about a million copies.

Nevertheless, in Russia, the Mauzers were included in the recommended weapon that officers were allowed to buy instead of the Nagan revolver of the 1895 model of the year. But if “Nagan” could be bought for 26 rubles, then “Mauser” cost from 38 rubles. and above, and did not receive distribution. On the eve of the First World War, they began to arm the pilots, and from 1916-nd - the personnel of automobile and motorcycle parts. It was from them that the legendary weapons went to the commissars and security officers.

During the Civil War, 7,63-mm 1912 model pistols of the year were mainly used. Prize "Mauzers" with the Order of the Red Banner on the handle, called "Honorary revolutionary weapon" (the highest award of Soviet Russia), received the Soviet commander-in-chief Sergei Kamenev and the commander of the First Mounted Army Simon Budyonny. In 1943, the award-winning Mauser was awarded to Leonid Brezhnev.

"The first red officer" Klim Voroshilov named in honor of his beloved pistol even his horse. The hero of the Soviet Union, the legendary border guard Sergeant Nikita Karatsup, who personally destroyed the saboteurs 129 and detained the border intruders 338, was also armed with a Mauser. Not with anything, but with a reliable "Mauser", the famous polar explorer Ivan Papanin set off for ice-wintering.

The Mauzerians and opponents of the Soviet government, and even criminals, used it extensively. The famous Drozdov commander White General Anton Turkul fought with the "Mauser". Among other things, the Mauser was used by the raider Yakov Koshelkov, who attacked Lenin himself in 1919. In Armenia, opponents of Soviet power in the early 1920s were even called "Mauserists", and in Turkestan, "Mausers" gained popularity among the Basmachis.

And the connoisseur of this gun was Winston Churchill.

After the defeat in the First World War under the Versailles Peace Treaty, Germany had no right to produce pistols with barrels longer than 100 mm. I had to redo the legendary "Mauser". Observing the new requirements, Germany supplied a large batch of shortened "Mauser" for the needs of the Red Army, which in the West were called the "Bolo-Mauser" (Bolshevik Mauser). In the USSR, the Mauzers were used during the Winter War by the 1939-1940 by the skiing teams of the scouts, and during the years of the Great Patriotic War they became popular among the partisans. At the Podolsk ammunition plant, they even started producing copies of ammunition for the Mauser.

Because of its unusual appearance, "Mauser" became an indispensable participant in the Soviet films about the revolution and the Civil War. And with a light hand of filmmakers, almost all the characters were armed with a "Mauser". He was present in the "White Sun of the Desert", and in the "Elusive Avengers", and in the film "Officers."

In fact, it was a very rare and prestigious weapon, rather used as a bonus.

Turn around in the march!
Verbal is not a place for slander.
Hush, speakers!
Your
word,
Comrade Mauser.

QUESTION FROM 1918 OF THE YEAR
What weapons killed Nicholas II?

One of the regicides, Peter Yermakov, later claimed that in July 1918, it was he who from “Mauser” shot former emperor Nicholas II, his spouse, heir, and one of his daughters. In 1927, Yermakov handed over the Mauser to the museum in Sverdlovsk (now Yekaterinburg). However, the right to be considered the liquidator of Nicholas II was challenged by Yakov Yurovsky, who in 1927 also donated his weapons to the Moscow Museum of the Revolution. Yurovsky said he used two pistols at once - the Colt and the shortened Mauser. Modern researchers believe that only one Mauser was used in the shooting (three bullets of this system were found in total), which was in possession of Yurovsky, and Yermakov fired from the usual Nagana.