Vice Admiral Senyavin and the soldier Efimov: the fraternity as the main weapon in battle 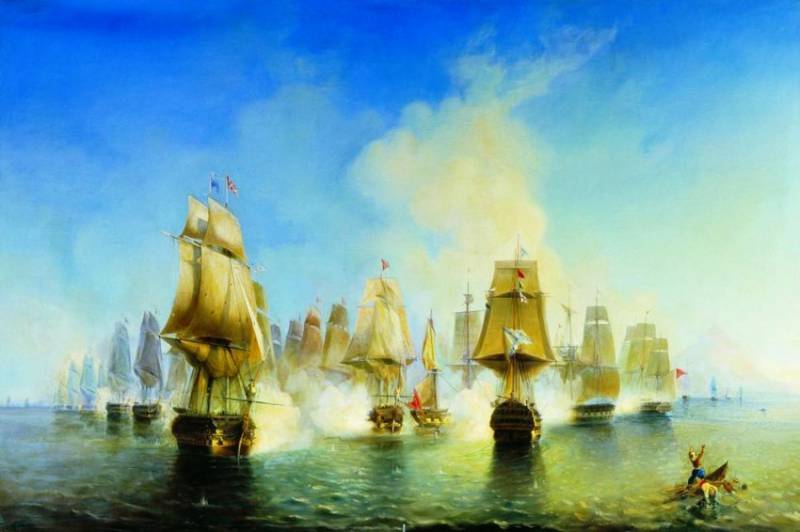 In 1807, the Russian squadron entered the Aegean Sea. All the islands there and all the coasts of the mainland at that time belonged to the Ottoman Empire. The Aegean Sea, in essence, was the "Turkish Inner Lake". A squadron with a small landing looked like little David, going to fight with the monstrous Goliath.
Turkish admirals twice brought the main forces of the empire into the sea. And they were put to flight at the Dardanelles, and then utterly routed between the island of Lemnos and St. Athos Mountain.

He was undoubtedly a charismatic person. From his youth he showed rebellious, independent character. He was in conflict with the famous naval commander Fedor Fedorovich Ushakov. And at the same time he had a bright talent of the commander. The same Ushakov gave him the best recommendation: "... He is an excellent officer and in all circumstances can with honor be my successor in the leadership of the fleet."

Historian D.N. Bantysh-Kamensky wrote about the character of Senyavin, who had already gained fame: "He ... combined justice with strictness in service; his subordinates were loved not as a boss, but as a friend, as a father: they feared more than all the punishments — the loss of the smile he accompanied all his orders and with which he received their reports. In addition, he was filled with devotion to the throne and cherished all native. " A wonderful man, a brilliant commander! But in order to forge such a character, Senyavin broke himself a lot. In his early years, Dmitriy Nikolayevich behaved like a whore. Relatives humbled his young nonsense beatings. 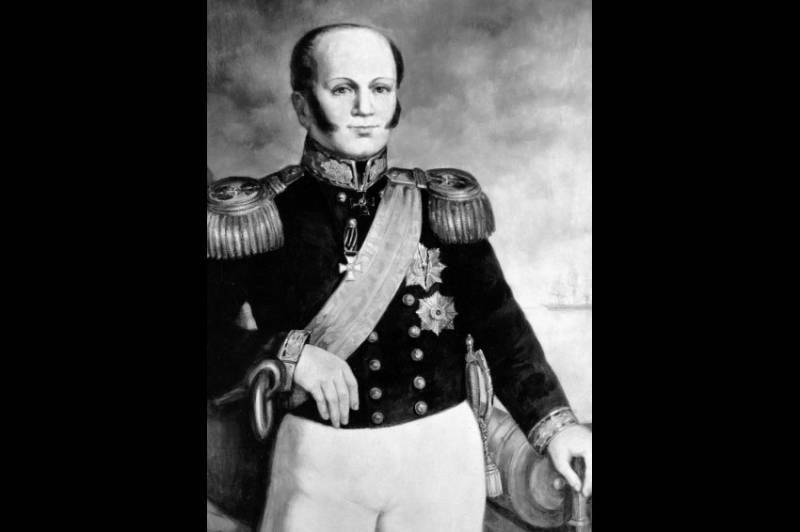 Unknown author. Portrait of Admiral Dmitry Senyavin. Photo: RIA News
Over the years, the beautiful swan of naval art has grown out of the pugnacious ugly duckling.

By the beginning of the campaign in the Archipelago, Senyavin had a tremendous combat experience. He participated in two squadron battles with the Turks - under Fidonisi (1788) and Kaliakria (1791), captured the French fortress on the island of Lefkada (1798), and successfully commanded the actions of the Russian squadron against Napoleonic France in the Adriatic Sea (1806). But besides his own tactical talent, Senyavin had another strong trump card that helped win. This trump card is a brilliant collaboration of officers of his squadron, excellent professionals, commanders who adhered to the laws of maritime fraternity.

In their close friendly circle, according to a contemporary, "... Dmitry Nikolayevich seemed to be surrounded by his own family. His conversation was varied and pleasant for everyone, everyone participated in it, for he spoke to everyone in his own conversations, so he seemed to forget himself , he remembered only the others ... When the conversation turned to Russia, his eyes were revived, everyone listened with attention and, it seemed, only in this case it was dangerous to contradict his opinion "1.

One of the junior officers of the squadron, Vladimir Bronevsky, left memories of his vice-admiral.

Once a simple soldier, Ivan Efimov, received from the commander of the enemy forces of the French Marmon 100 gold napoleonor as a reward for having bought the French officer's gold coins from the Turks for 13 (they were going to cut off his head). Efimov counted out his 13 chervonets, but refused to take the rest. Then Senyavin replaced the rejected napoleonds with a Russian gold coin, added his own and said: "Take it, not the French general, but I give you; you do honor to the Russian name," and moreover the noncommissioned officer granted the soldier.

In another case, Senyavin paid the debt to a doctor who healed Bronevsky himself from a severe wound, which he received while defending from the Turks of the Russian base on Tenedos Island. After giving money, Dmitry Nikolaevich considered this insufficient and gave the doctor a ring with a diamond. Delighted doctor immediately asked for the Russian service. The admiral received him. “With such means,” writes Bronevsky, “Dmitriy Nikolayevich acquired love from his subordinates, and this love, not easily acquired, despite the vicissitudes of cases, will save him the respect he deserved with good deeds and merits of famous ones. Attention to subordinates always ready from him help ... will never be eradicated from the memory of all who had the honor and happiness to serve under his command "2.

Subordinates responded with a dedicated service and absolute confidence in the boss. They even carried out those orders of Senyavin, which completely contradicted their combat experience. And this attitude to the vice-admiral as a father and friend turned out to be salutary in the bloody battle at the Athos mountain 19 June 1807.

On that day, Senyavin under command was the 10 of the battleships. The role of the junior flagship was played by Rear Admiral Alexey Greuil. The list of ship commanders consisted of lieutenant-captain Alexander Malygin and nine captains of the 1 and 2 ranks. They are Dmitry Lukin, Roman Shelting, William Krovve, Pyotr Roznov, Mikhail Rtishchev, Daniil Maleev, Fyodor Mitkov, Ivan and Mikhail Bychensky. These are the 11 top squadron officers. On them, Dmitriy Nikolaevich Senyavin should have placed his main hope.

And all of them - every single one - lacked combat experience.

None of these 11 people commanded a battleship in a squadron battle. Yes, and no other ship - either. Bloody and Greig did not participate in any battles. Mikhail Bychensky had only negative experience - in the battle of Gogland the ship where he served, was captured by the Swedes; This, of course, is better than no experience at all, but it could still leave a bad mark on his combat training ...

As for the rest, they all had the same type of experience of participating in large battles. Being young lieutenants, they fought with the Swedes in the sea battles of 1788-1790. But what were the battles? Slow-stately minuets, unhurried movements of squadron lines, shooting, mainly from medium and large distances. Senyavin had to act in completely different conditions. Defensive tactics could not lead him to success: the Turks would simply have left, avoiding the battle. Therefore, it was required to attack. Moreover, Dmitriy Nikolayevich could gain a guaranteed victory only by coming close to a short distance with the enemy.

Until 1807, no one except Senyavin entered into battle with the Sultan's fleet. The tactical plans of the vice-admiral could even be hindered by the skills of the Baltic officers: the experience of the battles of Gogland, Öland, Revel, Red Hill and Vyborg taught them nothing at all what Dmitry Nikolaevich wanted from his subordinates. But he believed in them. And they did not disappoint the commander and friend. 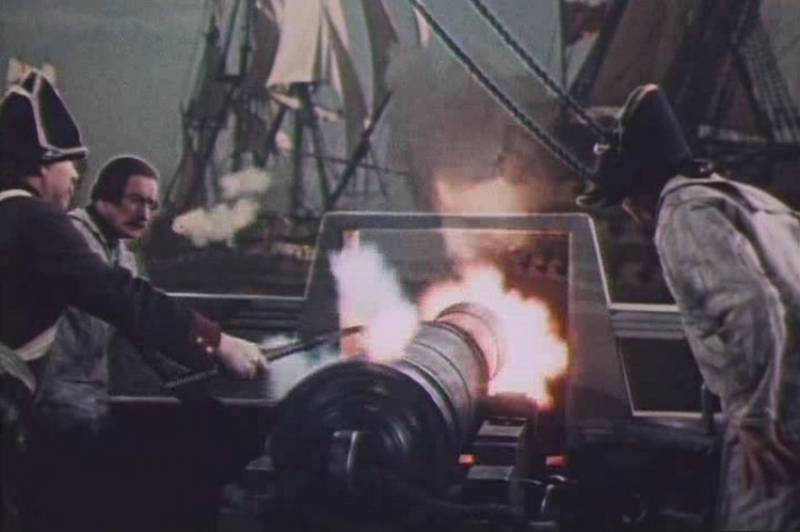 Shot from a film Photo: Motherland

Before the Athos battle, the squadron received orders from Vice-Admiral Senyavin: “As long as the enemy’s flagships are not defeated strongly, then they should always expect a very stubborn battle. And so, by this circumstance, I suggest making the attack in the following order. By the number of enemy flagships, each of our two attack , ships are assigned: "Raphael" with "Strong", "Powerful" with "Yaroslavl", and "Selaphail" with "Uriel" ... Descend to the prescribed ships for enemy flagships and attack them on purpose two with one and all The last battle of 10 Maiya (Battle of the Dardanelles Strait. - D.V.) showed us: the closer to the enemy, the less damage from him, therefore, if anyone would happen and fall off the enemy ship, then and then we can expect However, due to many unforeseen cases, it is impossible to make positive instructions on each; I do not extend them any more, I hope that you will honor your duty in a glorious way ... "3

By confronting his officers with tasks to battle, Senyavin once again took the risk: he chose a tactical design that implied a great deal of independence for junior flagships and ship commanders. The squadron commander clearly understood that he could not strictly control the course of the battle from beginning to end: the plan he had developed assumed actions by several independent detachments, moreover, some of them had to fight in the distance, and therefore give her any order with the help of flag signals embarrassing.

Senyavin understood just as well what a dangerous position he was putting himself and the flagship: he had to fight at a fair distance from the main forces of the squadron. Consequently, Dmitriy Nikolayevich was counting on the fact that his orders would be carried out by officers even at the moment when he could not control their implementation; his plan for battle will be realized, even if he himself perishes; his officers will take enough initiative and commander skills if the battle goes "not according to plan."

I calculated not in vain!

Senyavin's trump card worked: the officer fraternity he created around him followed him as the true leader and snatched victory from the Turks.

Ctrl Enter
Noticed oshЫbku Highlight text and press. Ctrl + Enter
We are
The first in the sky. Mikhail Efimov - pioneer of Russian aviationIn the shadow of the Napoleonic era. Mediterranean Expedition of Admiral Senyavin
Military Reviewin Yandex News
Military Reviewin Google News
9 comments
Information
Dear reader, to leave comments on the publication, you must sign in.