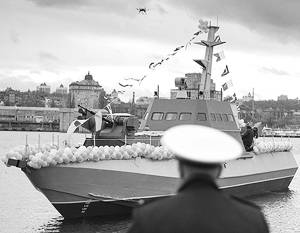 The Ministry of Defense of Ukraine announces grandiose plans for the development of the naval fleet. Over the next four years, the country plans to build thirty ships and boats (this is more than that of Germany). This is not the first time Kiev has announced Napoleonic military plans, which it later disavows. The rapidly impoverished Ukraine has no money for such an expensive pleasure as a military fleet.


Ukraine plans to build 30 warships and boats for the 2020 year, the defense ministry said on Tuesday. There are already some successes in this direction: two small artillery armored boats have been built, work continues on four more. Plus, the Ministry of Defense signed a state contract with the plant "Leninskaya forge" (indirectly owned by Petro Poroshenko, reports TASS) for the construction of two amphibious boats.

Back in the fall of 2015, the then commander of the country's Navy, Sergei Haiduk, described the bright prospects of the Ukrainian fleet. "Until the end of 2020, the Ukrainian Navy should have 66 ships and support vessels, an 31 aircraft, coastal defense forces, powerful artillery units, marines and other support units," he argued. The number of warships, along with ships of the marine guard, is 17 units. The rest are mostly collateral ships.

He also reported on plans to purchase several small submarines, which, according to Haiduk, is laid down in the “State Targeted Program for the Development of Arms and Military Equipment until 2020 of the Year”. It was not reported where it is planned to raise money for the purchase or construction of such expensive weapons. “The work is going very powerfully,” argued Haiduk, who was dismissed by Petro Poroshenko in April 2016 for insufficient performance of his duties and low authority among the military and volunteers. The Minister of Defense of Ukraine Stepan Poltorak, who acknowledged that the country cannot count on submarines, justified his statements.

Nevertheless, in Kiev, they did not lay down their hands regarding plans to expand the fleet. So, in November 2015, the first armored artillery boat of its own - non-Soviet - production was launched, which was called “an important step to restore the military potential of the Ukrainian Navy. Experts did not appreciate the enthusiasm of the Kiev authorities, calling the boat "squalor." It is these boats that are being built now at the Leninskaya Kuznitsa plant.

The United States helped Ukraine a great deal by responding to the call to replenish the country's navy. 30 January 2015 of the year according to the program of material and technical assistance of the USA transferred to the Ukrainian Navy five high-speed inflatable motor boats of the type Willard Sea Force 730 and Sea Force 11M manufactured by Willard Marine.

Not a budget issue

In 2016, a record military budget was signed in Kiev. Thus, more than 100 billion hryvnia, or 5% of the total GDP of Ukraine, was allocated for defense and security, writes the Ukrainian newspaper Observer. The Ministry of Defense of Ukraine will receive a record 55,5 billion hryvnia from them. “If you count the costs only for the army and navy, and also convert them into dollars, then this amount looks less impressive - just 2,3 billion dollars. Especially if you take into account the money allocated in 2015 year, when the Defense Ministry received 45 billion hryvnia, or 2,85 billion dollars at the NBU rate at the beginning of 2015 of the year, ”writes the publication.

Against this background, the construction costs of even such boats as the result of the work of the “Leninskaya smithy” recently launched into the project “Gyurza-M” look fantastic. So, in the 2012 year, when the boats began to build, their cost was estimated at 120 – 130 million hryvnia. At the current exchange rate, this would be 4,75 million USD. If Ukraine plans to build 30 of such vessels, then the final cost (starting from the current rate) will reach 142,5 million dollars, which is a significant part of the budget. The amounts, of course, are purely theoretical, because the dollar exchange rate has changed significantly. The contract amount could also change, because in 2013, they wanted to terminate it due to lack of funding. We emphasize that we cite as an example the construction of exclusively armored river boats of the Gyurza-M type, and not full-fledged naval ships.

More serious systems are priced much more expensive. So, in 2011, a project was announced under the name “Ukrainian Corvette”, the lead ship of which was to be “Vladimir the Great”. Its construction and equipment were estimated at 250 million euros, it was planned to build 10 of such corvettes by 2026 year - and therefore, spend 2,5 billion euros. However, in 2014, the construction of the first corvette was frozen due to lack of funding.

Director of the Institute of Political and Military Analysis Oleksandr Khramchikhin wondered what exactly the Ministry of Defense of Ukraine means by “ships and boats”. “If we mean ships and even boats in the classical sense, then it is absolutely unrealistic,” Khramchikhin told the LOOK to the newspaper.

According to him, by the year 20 it is possible to build 30 ships and boats, if only these are some very small vessels. “Over the years of independence, they built about as many small boats without weapons. They have a displacement of several tons, and the length - a few meters. These are patrol boats for border guards, customs officers. For a normal sea war, this does not fit in any way, ”the expert noted.

Khramchikhin noted that Ukraine possesses large shipbuilding capacities, but “this does not mean anything”. “Because the situation in the Ukrainian economy does not allow this,” explained Alexander Khramchikhin.

Meanwhile, the official representative of the Investigative Committee of Russia, Vladimir Markin, proposed an option under which Ukraine would be able to pull such construction. “If warships are inflatable mattresses, then this is real. They know how to “inflate”, ”wrote Markin on Twitter.

In turn, the chairman of the All-Russian Movement for Fleet Support, Captain First Rank Mikhail Nenashev, is convinced that for the remaining three and a half years, Ukraine can only buy from the other country "a few low-power katerkov."

“The stated number of ships and boats in 30, if they are not made of paper, is fantastic for the Ukrainian state,” said Nenashev to VIEW.

In his opinion, Ukraine’s second-hand ship can be acquired from some “pitiful country - a member of NATO”. “These are the regular and dangerous attempts of the Ukrainian useless dreamers. 30 ships and boats - is a serious naval force. So many modern ships are not in the UK and Germany. It seems to me that the Ukrainian political elite is not producing boats and ships, but fantasies on the river and sea theme, ”Nenashev believes.

He explained that even for the construction of boats with machine guns on board, it is necessary to have serious cooperation in the defense industry complex and first-class specialists. “In Ukraine there are elements of the military-industrial complex. But these elements are already in a weak state. They can make separately diesel engines for ships, some types of ground weapons. Inquiries of the Kiev chiefs are akin to the production of tanks from garbage cans, ”said Nenashev.

He also noted that Ukraine should spend money not on vain dreams, but “saving lives in the country itself”. “If Ukraine stops the Bandera war against common sense and its own people, no one will threaten Ukraine. Those who closely monitor the events in the Black Sea region remember that some Georgian military leaders had similar dreams about dozens of new ships and boats, ”concluded Mikhail Nenashev.

Ukrainian navy at the moment almost lost. Kiev was not engaged in the development and even maintenance of this industry, and many ships became useless. There was even a reduction in the fleet: in the 2012 year, six ships were withdrawn from the Ukrainian Navy, and no replacement was planned for them. In October, 2013, another warship, three support vessels and five boats were withdrawn from the fleet.

The remaining vessels in Ukraine are not in the best condition. The guard ship "Vinnitsa" is under repair since 2007. During the return of the Crimea under Russian jurisdiction, it was located near the peninsula, but was subsequently transferred to Ukraine. Minesweeper Genichesk, also returned to Ukraine, was built 30 years ago. And from the submarine "Zaporozhye", recognized as dangerous for use, Kiev refused.

According to unofficial data, in the fall of 2009, the normal functional state was revealed only in one combat ship of the Ukrainian Navy - the corvette Ternopil. This is the newest ship, it became part of the Ukrainian fleet in 2006 year. Appointed in 2014 year and. about. Tenyukh, Minister of Defense of Ukraine, declared that only four ships were conditionally capable of fighting: the Hetman Sagaidachny frigate, the Ternopol corvette, the Slavutych command ship and the Konstantin Olshansky large landing ship. All but the first are under the jurisdiction of Russia today.

Ctrl Enter
Noticed oshЫbku Highlight text and press. Ctrl + Enter
We are
"In Kiev, we fought with werewolves." "Golden eagle" told about secrets of the Maidan: snipers, capture of a mortuary, underground smithyList of destroyed the largest and most high-tech enterprises
Military Reviewin Yandex News
Military Reviewin Google News
38 comments
Information
Dear reader, to leave comments on the publication, you must sign in.