28 May 2016
8
"Polish balcony" threatened with the collapse of the army, and even the empire


The great retreat in the summer of 1915 from Poland and Galicia, in spite of numerous works about it, actually remains a blank spot. Under the influence of the post-October political conjuncture, historiography has formed a stable opinion: this is a catastrophe, a turning point in the struggle on the Eastern front of the war, which led to the degradation of the army and an increase in the revolutionary situation in Russia.

So what was it - a forced strategic maneuver or a consequence of a major miscalculation?

During the hardest and multistage Gorlitsky operation 19 of April - 10 of June 1915 of the year, the Austro-German troops achieved tactical and operational success, managing to give them a strategic tint. The enemy decided to surround the Russian troops in Poland, striking in the north and south of the “Polish ledge”, to implement the “Summer Strategic Cannes”. It was from June, after the end of the Gorlitsk operation, that the Russian troops were forced to launch the Great Retreat. But the retreat was carried out according to a single strategic plan; Russian troops launched effective counterstrikes. The main reason for the withdrawal is the need to level the front and correctly evacuate the advanced theater in order not to allow the army located in central Poland to be locked into a strategic "boiler".

In early June, the 1400 infantry and 106 cavalry Russian divisions opposed the 36 infantry and 113 cavalry divisions of the enemy on the 19 kilometer front. His superiority in view of our problems with the logistics was quite noticeable. The number of field guns in the Russian army was reduced by 25 percent, and production could not even compensate for combat losses. 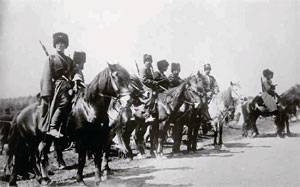 The meeting at the Russian Headquarters 4 June revealed that the armies of the South-Western Front have a shortage of 170 thousand people (replenishment is possible only in the number of 20 thousand fighters), projectiles and ammunition so small that it is necessary to limit the consumption of ammunition artillery ", although the number of guns decreased), there was an acute shortage weaponstrained reserves and officers. The decreasing number of combat units reduced the possibilities of fire defense and prevented the holding of counterattacks. Worsen maneuverability.

Nevertheless, at that time the Russian front chained 1 million 333 to thousands of German and Austrian soldiers and officers (they were opposed by 1 million 690 thousand of ours), while the French front was 1 million 800 thousand enemy troops (against 2 million 450 Thousands of English-French with equivalent technical equipment).

The decision to start a withdrawal, in order to avoid encircling the central army group of the North-Western Front in Poland, was made at a staff meeting on June 22 in the city of Sedlec. Attention was focused on the need to save manpower, without which the continuation of the struggle is impossible.

The author of the concept of active strategic defense in the 1915 summer campaign of the year — the commander-in-chief of the armies of the North-Western Front (4 – 18 of August – Western Front), General from Infantry, M. V. Alekseev, proposed the following tactical methods for the defense of positions, and concentrate the rest in reserve on the main directions where you can expect the enemy to advance; 1) when the enemy advances, conduct these short counter-attacks with these reserves. The concept of Alekseeva contributed an element of activity to the passive defense, to which, in the presence of weak maneuverability and fire impotence, the Russian armies were doomed. The enemy admitted to the positions almost unhindered, but the losses of those defending against artillery fire were reduced to a minimum. Counterattack restored the situation.

During the first month of the Great Retreat of the Russian troops (by early July), the enemy advanced along the Vistula by 55 kilometers and along the Western Bug by 35 kilometers - a rather modest result for two weeks of continuous fighting that began after the end of the Gorlitskaya strategic operation.

With the beginning of July, the simultaneous efforts of two army groups concentrated: one on the front of Narew and aimed at the Lomza-Ostroleka-Rozhan site, the other on the southern front of the forward ledge between Veprzhem and Bug, with access to the Hill-Wlodawa line, the Germans set themselves the task of cutting off surround the Russian troops that were on the arc of Narew - Middle Vistula and between the Vistula and the Upper Veprzhem. But the army on the flanks of the "Polish bag" restrained the enemy, and the troops in the central part of the kingdom, leaving Warsaw on 21 in July, slowly retreated to the Sokolov-Sedlets-Lukov railway. By the end of July, the armies of the North-Western Front retreated to the Osovets-Drogichin-Vlodawa-Turiisk line. The enemy was unable to quickly overcome the resistance of the Russian troops, who escaped encirclement and safely left the proposed defeat. But they had to retreat under extremely adverse operational-tactical and organizational conditions, and, moreover, adjusting to the pace of the Polish evacuation.

As a result of fierce fighting, incomplete fighting in the armies of the North-Western Front, which received almost no reinforcements, increased from 210 thousand to 650 thousand people. Despite the difficult conditions of the struggle with the enemy, superior in strength and possessing an unlimited limit of ammunition with a large number of guns, he was not allowed to cut off or surround a single military unit.

In early August, the enemy especially pressed in the direction of Bialystok - Brest - Kovel. 26 August The new management of the Stavka gives a directive to stop the Great Retreat and begins to struggle with the inertia of a long withdrawal.

In the course of defensive offensive operations in August-October of the 1915 (Vilenskaya, Lutsk, Chartori, offensive on Ceret), the front was stabilized along the Chernivtsi-Dubno-Pinsk-Baranovichi-Krevo-Naroch-Dvinsk-Yakobshtadt line.

Send away but not run

The great retreat was carried out according to plan, in stages. It can be qualified as a strategic pullback, a maneuver characteristic of the confrontation of mass armies. Russian troops were active defense, put effective counterattacks. The rollback was associated with the solution of the most important strategic tasks, the main of which was the evacuation of the “Polish balcony”. Saw it and the enemy. M. Hoffman noted: “Apparently, the Russians really repeat the 1812 year and are retreating along the whole front. They burn hundreds of settlements and take people away. ”

The great retreat for Russia had extremely adverse both military and economic consequences. From the end of April to 5 of September 1915 of the year (Vilno’s fall) the maximum value of the Russian army’s rollback was up to 500 kilometers. The enemy completely removed the threat from Hungary and East Prussia. Russia has lost important regions, a network of strategic railways, suffered sensitive human losses.

But the army was saved, and the enemy was unable to achieve the desired strategic success, even at the cost of much blood. M. Hoffman recorded in his diary 3 August (in a new style), summing up some of the results of the actions of the German troops on the northern flank of the “Polish balcony”: “On the left wing of Galvitsa (army group of general artillery M. von Galvits. - A. O.) Those 25 000 people that we lost dead and wounded will not be returned to us. ”

Paradoxically, it was a strategic setback, called the Great Retreat, marked the collapse of enemy plans to withdraw Russia from the war. It made it possible to keep the second front fighting the Austro-Germans (deadly for them by the very fact of its existence), and this fact deprived the Fourth Alliance of even a hypothetical perspective on the successful outcome of the First World War.

Ctrl Enter
Noticed oshЫbku Highlight text and press. Ctrl + Enter
We are
Austria-Hungary in the war: 1916 and 1917 campaigns. Deterioration of the empireAustria-Hungary retained the Eastern Front only with the help of Germany
Military Reviewin Yandex News
Military Reviewin Google News
8 comments
Information
Dear reader, to leave comments on the publication, you must sign in.