28 May 2016
89
"Especially distinguished by brutal massacres, helped the invaders in the mass extermination of the Soviet people"


Ukrainian radicals, supported by the Kiev authorities, claim that Russia is not only responsible for the "Stalinist genocide" of the Crimean Tatars, but also has not given them all the "debts". The idea of ​​repentance is imposed on our compatriots for more than a quarter of a century. The facts do not confirm the innocence of the deported people.

The testimony of Field Marshal Erich von Manstein, who in 1941 commanded Wehrmacht troops on the peninsula on the peninsula, is well known: “The majority of the Tatar population of Crimea was very friendly towards us. We even managed to form from the Tatars armed self-defense companies, whose task was to protect the communications and their villages from the attacks of partisans hiding in the Yayly Mountains. The reason that a powerful partisan movement developed in the Crimea from the very beginning, which caused us a lot of trouble, was that among the population of the Crimea, in addition to the Tatars and other small national groups, there were still many Russians ... The Tatars immediately took our side. They saw in us their liberators from the Bolshevik yoke, especially since we respected their religious practices. An impressive Crimean Tatar deputation came to me, for example, which brought an abundance of fruit and beautiful handmade fabrics for the liberator of the Tatars Adolf-efendi. ” The close cooperation of the Crimean Tatar nationalists with the occupiers was regularly reported in their reports to Berlin by the generals Halder, Guderian, Rundstedt or, for example, von Papen, the then German ambassador to Turkey. The last diplomatic missions in Moscow, Sofia and Berlin reported the same to Ankara.

“As soon as the front approached Perekop, the mass desertion of the Crimean Tatars from the Red Army began, as if on cue.”

In 1940, the share of Russians in the resident population of the Crimea reached almost 50 percent, Ukrainians - about 14 percent, and Crimean Tatars - 20 percent. Since August, 1941-th from German airplanes on the Crimea fell leaflets with promises to "finally solve the issue of independence of the Crimean Tatar nation." This was planned in the form of a protectorate of the Third Reich or condominium (joint management) of Germany and Turkey. And as soon as the front approached Perekop (at the end of September 1941), the desertion of the Crimean Tatars from the Red Army began, as if on command, in large quantities.

In December, the 1941 of the year, the German command began to organize so-called Tatar or Muslim committees in Crimea (they were also established in the North Caucasus. - AB). A month earlier, under the leadership of the Germans, armed Crimean Tatar self-defense units began to be formed. Separate formations were sent to the Kerch front and partially to the Sevastopol station, where they participated in battles against the Red Army. “From the very first days of their arrival, the Germans, relying on the Tatar nationalists, without robbing their property openly, as they did to the Russian population, tried to ensure a good attitude towards themselves,” wrote the head of the 5 district in Moscow in a report to Moscow. Crimea Vladimir Krasnikov. Tatars were called to be conductors of punitive detachments. But most of all "famous" for the atrocities against the civilian population. Fleeing from reprisals, Russian-speaking residents and small indigenous peoples (Krymchaks, Karaites, Greeks) were forced to seek help from the German authorities - and sometimes even found their protection. From among the Crimean Tatars who surrendered to captivity, a special agent was being prepared, who was thrown into the rear of the USSR for sabotage, anti-Soviet and nationalist agitation.

In a memorandum of the deputy state security and internal affairs officers of the USSR B. Kobulov and I. Serov addressed to Stalin and Beria, dated 22 on April 1944, says: “All 20 thousands of Crimean Tatars deserted in 1941 from the 51 th army during its retreat from Of the Crimea ... Most of them began to serve the invaders, revealing partisans, Soviet intelligence officers, mocking the civilian population. " The evidence that the desertion of the Crimean Tatars from the Red Army was almost universal, is confirmed by numerous documents. 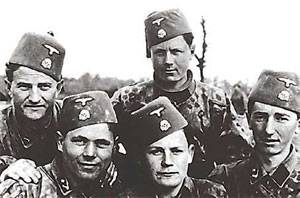 10 March 1942 th at the general meeting in Alushta of the "Tatar Committee" of Crimea expressed "thanks to the Great Führer ... for the free life he had given to the Muslim people. Then they arranged a service for the preservation of life and health for many years to Adolf Hitler-efendi. ”

After the crushing defeat of 6 of the German army of Paulus near Stalingrad, on the initiative of the Feodosia Muslim Committee, a meeting of the Crimean Tatars was organized, where they decided to help the Wehrmacht to the bitter end and raised a million rubles to help him. At the end of 1942, the committee announced the slogan “Crimea for Tatars only” and noted in its statements that the future fate of the peninsula is joining Turkey. A significant event was the two visits to Feodosia of the Turkish emissary Amil Pasha, who actively called on the Crimean Muslims to support the German fascist army in every possible way.

In April, 1944 began the last battles for the liberation of the peninsula. According to documents, the Crimean Tatar punitive battalions resisted the Soviet army and local partisans to the last. Thus, in the area of ​​the Islam Terek station, three Crimean Tatar battalions fought against 11-th Guards Corps units, which only lost prisoners of 800 people. The 149 Battalion defended Bakhchisarai stubbornly. The remnants of these units left the peninsula together with their masters and continued the struggle against the USSR. According to German data, in January 1945-th in the German armed forces, mainly in the SS, more than 10 thousands of Crimean Tatars fought. When the Red Army was approaching Berlin, every fifth adult Crimean Tatar shot her. As I. B. Tito testified, on the side of the Croatian Ustashes, Chetniks Mikhailovich (in Serbian Krajina) and in Bosnia, until the middle of May, the Crimean-Tatar detachments also fought, and a few of them managed to break through to northern Italy and the neighboring region of Austria, where they surrendered to british people

We give only some evidence of crimes of the Crimean Tatar accomplices to the aggressors in their native land.

“The chairman of the district Muslim committee Umerov Vekir was arrested in the city of Sudak. In January, 1942, during the landing of our landing force near the town of Feodosiya, Umerov's detachment detained 12 Red Army paratroopers and burned them alive. ”

“In the city of Bakhchisarai, a traitor Jabar Abibulayev was arrested, who voluntarily joined 1942 in the punitive battalion created by the Germans. For active struggle with Soviet patriots, Abibulayev was appointed commander of a punitive platoon and executed civilians suspected of being in connection with partisans. ”

"A group of local Tatars were arrested in the Dzhankoy region, who, on the instructions of the German authorities, in March 1942, poisoned the Gypsies and Karaites in the 200 gas chamber."

11 May 1944 was followed by the decree of the State Defense Committee of the USSR No. 5859-ss: “During the Patriotic War, many Crimean Tatars changed their Homeland, deserted from the Red Army units defending the Crimea, and went over to the enemy, entered into the German Tatar volunteer military units that fought against the Red Army. During the occupation of the Crimea by the fascist German forces, participating in the German punitive detachments, the Crimean Tatars were particularly distinguished by their brutal reprisals against the Soviet partisans, and also helped the German invaders in organizing the violent hijacking of Soviet citizens into German slavery and the mass extermination of Soviet people.

The Crimean Tatars actively cooperated with the German occupation authorities, participating in the so-called Tatar national committees organized by the German intelligence, and were widely used by the Germans for the purpose of bringing spies and saboteurs into the rear of the Red Army. The Tatar National Committees, in which the White Guard-Tatar emigres played the main role, with the support of the Crimean Tatars, directed their activities towards the persecution and oppression of the non-Tatarian population of the Crimea and worked to prepare forcible rejection of Crimea from the Soviet Union with the help of the German armed forces.

Given the above, the State Defense Committee decides:

2. Establish the following procedure and conditions for eviction:

a) allow special settlers to take with them personal belongings, clothing, household equipment, dishes and food in quantities up to 500 kilograms per family.

Acceptance of livestock, grain, vegetables and other types of agricultural products to produce with the issuance of exchange receipts for each locality and each farm. "

It should be noted that the deportation was also viewed as a measure to prevent interethnic conflicts, the protection of those resettled from the inevitable and, in the opinion of most people, just revenge.

According to the GKO, 191 044 people of Tatar nationality were removed from the Crimean ASSR. At the same time, anti-Soviet elements of 1137 were arrested, and in total during the operation - 5989 people. From 151 720 of the Crimean Tatars, exported in May 1944 to the Uzbek SSR, 191 people died on the way. Part was relocated to the adjacent areas of Kazakhstan (4286 people) and Tajikistan. Separate groups were sent to the Mari Autonomous Soviet Socialist Republic (8597 people), to the Urals, to the Kostroma region. Six thousand Crimean Tatars of draft age were mobilized into the Red Army.

According to the decision of the State Defense Committee, those who proved themselves in the fight against the occupiers remained in the Crimea. There it was 1500.

Soon the Crimean Autonomous Soviet Socialist Republic was transformed into a region. In 1948, the replacement of Crimean Tatar toponyms by Russians began in the region. The region, according to the available data, was planned to be renamed Tauride. But soon after Stalin's death, this campaign ceased.

5 September 1967 was adopted by the Decree of the Presidium of the Supreme Soviet of the USSR (No. 493) "On citizens of Tatar nationality living in the Crimea", which actually allowed those who were resettled to the Urals and Central Asia not to return to the peninsula en masse. The secret note of the KGB in the Central Committee of the CPSU from 4 of October 1967 of the year said: "... It must be noted that a significant part of the Tatar population expresses a desire to return to the Crimea. Currently, mass resettlement is not expected, but it is possible that since the spring of 1968, large groups of Tatars can start leaving there. Party and Soviet bodies of the Crimea region need to keep this in mind and take into account in their daily work. ” It was also stated there: “A group of people from among the so-called autonomists took a particularly negative position in relation to the decree, which makes a demand for organized resettlement to Crimea and the creation of autonomy.” They "recently change their tactics, considering it necessary to first move to the Crimea, settle compactly, and then raise the question of the formation of autonomy ..."

The actions of the USSR leadership in 1944 – 1945 in respect of the overwhelming majority of the Crimean Tatars were justified. The Soviet government did not intend to formally review the decision on deportation, even during a period of voluntarism. Only by the end of 80-s in Moscow did “innovations” on this issue appear. Which, as further and the current events in the region show, could not but contribute to the growth of the Crimean Tatar nationalism.