Mr. Tuka knocks on the closed ... wall. Why not in the open door?

26 May 2016
12
24 May in the Ukrainian media published a small, but rather interesting interview with the deputy new Ukrainian ministry, Mr., sorry, pan, Tuka. That, which made prompt career from the blogger to the head of administration of the area. And today Georgy Tuka is the deputy minister of the new ministry. Ministries for temporarily occupied territories and internally displaced persons. 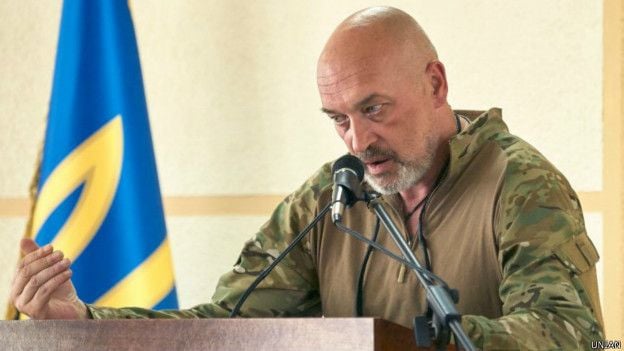 We will not talk today about the ministry itself. Not because it doesn’t really bother us. Just because after loud statements about its creation, the Ukrainian authorities fell into a stupor. What will it be and what should it do. Therefore, in the staff of the new ministry, there are still as many as 3 (three!) People. The rest in the project of this state.

Today it is much more interesting for me to understand how Ukrainian ardent European integrators and fighters for independence see the further fate of their homeland. And George Tuk is from such. Only, in contrast to the "parasyuk" and "lyashko", he had already picked up the power and realized that the official should be responsible for the words. Not a member of parliament. And the problem that he was "thrown" to solve is what most Ukrainians really care about.

Crimea, Donbass, Kherson, Dnepropetrovsk, Odessa, Nikolaev ... All these territories either have already come off "nenki", or on the verge. Yes, and "internally displaced persons" most have already stood up to the throat. According to the ingrained Ukrainian habit, today they are the cause of unemployment and the impossibility of raising the standard of living.

Their relatives and friends became "separatists". So, indirectly guilty and visitors. They require at least some opportunities for establishing their own lives in new places.

To begin with, I will quote common sense. Do not be surprised. It is sound. After all, the era of slogans passes. It is not particularly "Moskalyak" want to hang on the "Gilyak". Yes, and with horror they discover that life in the same Crimea is much better than in Ukraine. Even in the Donbas, where people die every day, better.

“The goal of reintegration is the restoration of civilian lifestyle in both controlled and non-controlled territories, the resumption of Ukrainian power, and the return of local civilians to a normal lifestyle. This requires some effort from both the government and the international community.

It should also be noted that, judging by the experience of international centers engaged in the study of armed conflicts, if within five years there is no reintegration of the territory, then practically the process never happens. "

I read this statement and thought: finally it came! At last, in the intervals between “antics and jumps,” at least one of the Ukrainian officials read international research on this topic. At least looked at international documents.

However, my joy quickly evaporated. The euphoria was replaced by the usual for Ukraine despondency. The correspondent of the Ukrainian media asked a very insidious question about the needs of the “liberated” territories of Donbas.

"The reintegration of the liberated territories involves several areas of work. One of them is the restoration of destroyed and damaged infrastructure, power lines, water supply, repair and restoration of the work of medical and school institutions. A very large list of what needs to be done.

In addition, it is necessary to create new jobs, because now, unfortunately, the problem of unemployment is very acute in the east, and it should be addressed, including by the state, with the involvement of international donor organizations and our domestic entrepreneurs. Because no one will create additional jobs for us. "

It seems that George Tuk has become an employee of the Zakharchenko apparatus. I'm not judging by words, by deeds. After all, it is there that they are trying to solve the problems of residents in this way!

But in this answer I was more interested in another phrase. Namely - "attracting international donor organizations." Speaking the language of an ordinary person, we don’t need loans, and they don’t give loans. Because we can not give. But let's give “free of charge, that is, for nothing”, as the hero of the Soviet cartoon said. Something broke in the minds of even people like Tuk.

Another answer shocked me. You will never believe what a Ukrainian deputy or official can say or write. There is enough patient for Ukraine in general, but especially for Donbass, a question. These are social benefits. But it is precisely the new ministry that is positioned as the main “resolver” of such problems.

Pensioners and other people who, according to the Ukrainian laws, are entitled to payments, have not received them for a long time. What's the matter? And here Tuku becomes that Tuku that was two years ago.

Ukraine is ready to pay money! Right now. However ... "It depends on how the opposite side will observe, first of all, security measures. How can we now talk about the restoration of payments if there are robbing banking institutions?"

So that's the thing. There are so many robbers in the Donbass that all banks are simply robbed. And all the ATMs too. A "cash" in the hryvnia buried in the ground and poured concrete.

The same "starotukovskaya" position of the deputy minister in the matter of elections. "I have never been categorically against the elections. I have always said that there are no prerequisites for this. They are not there now. They need to be created. If they can be created, then why not hold elections. However, in such conditions as now, then I I think that there can be no elections. "

"Elections are the last step. Before you hold elections, you need to take a number of measures that will ensure the legitimacy of the elections, their compliance with Ukrainian legislation, the participation of all political parties, the safety of election commissions and the media."

As we see, according to Tuk, there will be no elections in the Donbas. Because ... for a long time. Until the victory of the APU and punitive battalions.

But in general, if we consider this interview as the position of the government of Ukraine, a stable opinion is created that no one and nothing will be solved. All conversations are in order to calm down Ukrainian society. In fact, the government does not consider the question of reunification with the Donbas at all. It is important today to preserve those territories that are temporarily under Kiev control.

Donbass, according to Tuki: "At best, we will get Transnistria, and at worst, something like Ossetia." And I think it is on the basis of this that the policy of further development of the people's republics should be built.

Ctrl Enter
Noticed oshЫbku Highlight text and press. Ctrl + Enter
We are
Results of the week. “Excuse me, aren't you crazy?” - “No. I have a certificate "Turkey: fighters for democracy came together
Military Reviewin Yandex News
Military Reviewin Google News
12 comments
Information
Dear reader, to leave comments on the publication, you must sign in.