A monument in honor of MT Kalashnikov will appear in Moscow

25 May 2016
14
A monument in honor of the famous Russian gunsmith Mikhail Kalashnikov will soon appear in the Russian capital. The sculptural image of Mikhail Timofeevich will be installed in the Armory Square (alley) of Moscow - at the intersection with Krasnoproletarskaya Street. The initiator of the installation of the sculpture made by representatives of the Russian military-historical society. 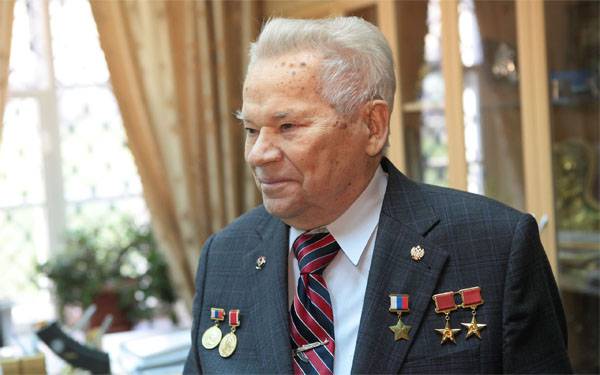 The installation of a memorial in honor of the Hero of Russia, twice Hero of Socialist Labor, laureate of the Lenin and Stalin prizes will soon be considered by the deputies of the Moscow City Duma.

Information Service Interfax reports that the Russian militaryhistorical society intends to take on all the costs associated with the creation and installation of the monument. According to some reports, we can talk about 35 million rubles.

It should be noted that last year a monument to Mikhail Kalashnikov was opened at a military cemetery in the Moscow region of Mytishchi. The daughter of the legendary gunsmith Elena Kalashnikova took part in the opening ceremony of the monument.

Recall that Mikhail Timofeevich Kalashnikov died 23 December 2013 year. He was 94 of the year.

Ctrl Enter
Noticed oshЫbku Highlight text and press. Ctrl + Enter
We are
In the center of Moscow a nest of “aliens” appeared: the installation with the eggs of the “fifth column” was exhibited in Novopushkinsky Square and at the editorial office of Echo of Moscow on the NewZRK C-200 rust in the woods near Moscow
Military Reviewin Yandex News
Military Reviewin Google News
14 comments
Information
Dear reader, to leave comments on the publication, you must sign in.