This will be a nightmare for China.

26 May 2016
38
The United States and China barely tolerate each other. You can say ripening confrontation. This is what some analysts think. And so news: the emerging alliance of the West and India can become a “nightmare for the Middle Kingdom”. Negotiations are underway between India and the United States covering the development of maritime security in the Asia-Pacific and Indian Ocean regions. 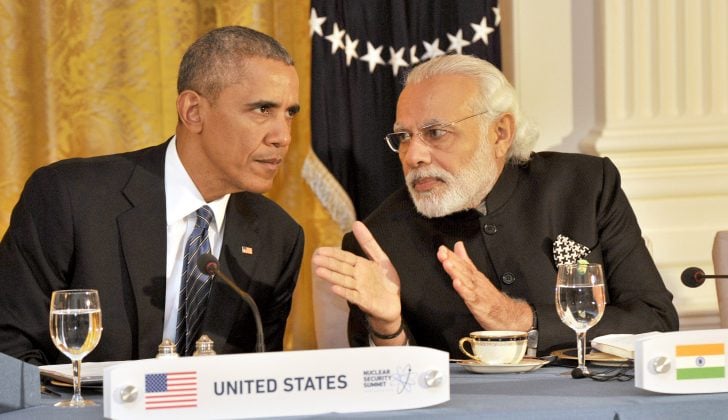 In the edition "Morning News USA" It is noted that "the United States and China are in confrontation with each other." And this is hardly an exaggeration.

The West is entangled in world conflicts here and there. The US, analysts believe, is already approaching the coming confrontation not only with Russia and China, but already with Venezuela. Not that war will be tomorrow, but Washington is clearly provoking tensions. Has the White House really gathered for a world war?

The publication points out that the United States violates the sovereignty of many countries by observing from the air. Some of the countries that have been actively “observed” lately are Russia, Venezuela and China.

Recently, one such “observation flight” reacted indignantly to China. The Celestial Empire called the passage at the borders of two American planes a "serious threat" (serious threat) to the airspace of the country.

However, Washington appears to be trying to deny this by blaming the Chinese media. The American press cites the “clarification” of Washington, which masterfully shifts responsibility to Beijing. According to US reports, the Chinese themselves began the "unsafe" interception of aircraft. Then came China, which refuted the American message. Foreign Ministry spokesperson Hong Lei bluntly stated that the Pentagon’s version was untrue.

In short, the issue was never resolved.

And things can go very far. China will probably have to soon find far more targets than a couple of some kind of aircraft.

In the past negotiations, as reported by the Ministry of Foreign Affairs of India, the American and Indian sides discussed issues of mutual interest, including prospects for developing cooperation in maritime security in the Asia-Pacific and Indian Ocean regions, as well as prospects for further strengthening cooperation between India and the United States.

This is quite officially stated in a press release.

Negotiations between the two countries led to the adoption of the US-India Defense Technology and Trade Program (DTTI). According to the National Interest magazine, US and Indian officials discussed technology sharing and the expansion of business ties in the defense industry of both countries.

The Iranian channel also writes on this topic. Press TV.

As it becomes clear from “some reports,” US lawmakers are striving to achieve India’s partner status. India must acquire a strategic similarity with the US allies in NATO.

20 in May, Indian newspapers wrote that US lawmakers approved a bill according to which India would acquire a status similar to that of NATO allies. That is, in the future, Washington will consider Delhi "as a closer partner." This also means that Americans will be able to sell more military equipment and technology to India.

This "LJ" is no accident. The article presents the opinion of the American columnist Stephen Landman. He says that the relevant American aspirations lead "to the isolation of the largest states from Russia and China." As a result, the Russians and the Chinese will be "more vulnerable", and in the future they will be "easier to attack." The matter is not about war, but about political and economic actions.

Mr. Landman explained that China and Russia adhere to similar positions on a number of geopolitical issues and therefore are “the main threat to America’s desire for world domination” for Washington.

Earlier, Washington managed to isolate Brazil from Russia and China, and now it intends to do the same with India, the analyst said. The White House "is trying to ... attract India to its camp."

Press TV recalls that in June Barack Obama is due to meet with Indian Prime Minister Narendra Modi. The subject of negotiations will be including security issues.

Russia, which participates in the conditional “anti-Washington” bond with China, is still optimistic about India.

“We traditionally look with caution on the development of US military-political ties with India and Vietnam. They are very important partners for us, ”said "Pravde.Ru" Professor of the Department of Oriental Studies at MGIMO, Deputy Editor-in-Chief of the journal Comparative Politics Sergey Lunev. - But so far there is no pessimism. India is our main customer. weapons in the world. We in India have lost the military transport market to the Americans aviationbut at the same time, cooperation in other areas is very active. ”

As for the frictions of China and India, the main irritant in the relationship between Delhi and Beijing is still the acute border issue. Also, the parties are nervous because of mutual claims about the disputed territories. No wonder one of the main topics of the current visit to China of President of India Pranab Kumar Mukherjee is the issue of territorial differences between the two countries. The visit of the Indian leader will last until May 27. Behind the president, American figures invisibly loom ...

Observed and commented on Oleg Chuvakin
- especially for topwar.ru
Ctrl Enter
Noticed oshЫbku Highlight text and press. Ctrl + Enter
We are
The state and prospects of development of the naval forces of Ukraine (2013)Strangulation: the context, conduct and consequences of the American naval blockade of China
Military Reviewin Yandex News
Military Reviewin Google News
38 comments
Information
Dear reader, to leave comments on the publication, you must sign in.