26 May 2016
11
That would seem to be extraordinary in a telephone conversation? It’s not even a summit, not a “summit” meeting, it’s just the people who organized a telephone conference and talked about urgent matters. Nothing, even if we consider that the people from the very top. 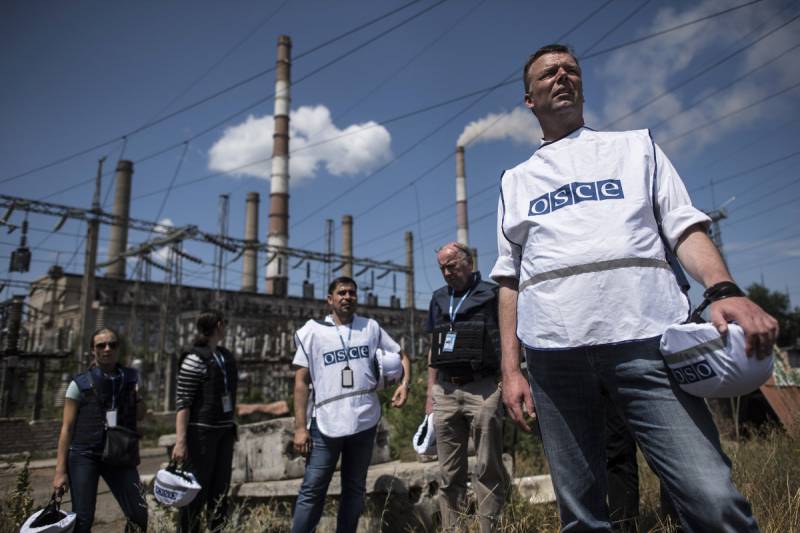 Just discussed in this mode, some issues. The crisis in the world, at least in order to save money, so as not to wander somewhere for half an hour of conversation. And the protocols do not need to agree. Phoned, questions discussed, something settled, something postponed to think. In general - "nothing, it’s everyday."

We have become accustomed to the fact that our neighbors climb out of their skin in matters of remaking their real zrady in a hypothetical peremog. And this case is no exception.

The press service of President Poroshenko loudly declares that at the talks "the leaders of Ukraine, France, Germany and Russia expressed support for the deployment of the OSCE police mission in Donbass, and also welcomed the start of consultations on this issue."

Well, really, if only they agreed on something ... But why?

It is clear that Peskov immediately issued a refutation, stating that no one even planned to create this mission for the time being. But who in Ukraine will listen to Peskov?

Paris and Berlin, strange as it may seem, gently twisted their fingers at their heads in the direction of Poroshenko, and in cautious expressions also spoke in the same vein with Moscow. Say, there was no talk of creating an OSCE police mission from among armed groups, although in principle we do not exclude such a possibility.

The OSCE mission, especially from the armed forces, is a very, very difficult question. Yes, he occasionally appears in conversations, but, having arisen, disappears immediately. The question is why?

It's simple. According to the participants of the Normandy debates, if the United Nations forces were to be introduced, then on the line of demarcation. In order to minimize military clashes, force peace and so on.

And this is where a magnificent Mr. Poroshenko arises, who has his own vision of the issue. The special contingent of the United Nations or OSCE should control not the line of contact. He must control ... the border with Russia. For, according to Poroshenko, this is where all the most important things for Ukraine take place. And the daily skirmishes ... this is so ... nonsense. The thing is completely everyday today.

Why exactly? The answer is simple to impossibility. Because all other ways to regain control of the situation, Mr. Poroshenko has successfully failed.

We don’t even remember the laws regarding the status of Donbass, we don’t remember about the elections that should have been held exactly as planned in the Minsk agreements. That is, first the law, and then the elections. Accordingly, the aforementioned transfer of the border with Russia under the control of Ukraine the day after the election, Mr. Poroshenko does not shine from the word "absolutely."

So you have to lie to the whole of Ukraine. In order to somehow show that "Europe is looking for us, Europe is looking at us." Well, yes, it looks. But more and more often silently twists his finger to his temple. Already, even to the most insidious Russophobes, it gradually comes to the conclusion that, whatever one may say, sober and consistent Putin is a much more profitable partner than the sometimes inadequate Poroshenko. And given that the cyclical nature of the quirks of the Ukrainian president is becoming shorter ... Conclusions can do everything. And they do. True, while quietly. But - it's all a matter of time.

By the way, there is another opponent of the OSCE police mission in the Donbas. This is the OSCE itself. Nobody jumps there from delight from the perspective of embarking on the line of demarcation. Not fools, they have a great idea of ​​what is happening there. It’s one thing to sit quietly in a hotel and go to the place where the next shell or mine is falling, and quite another to hang around the positions where, in fact, these mines arrive.

Although perhaps this would be quite an option. No wonder they say there, that if the OSCE arrived, there will be complete silence.

This strange layout comes out. And all that remains for Mr. Poroshenko is to lie, lie and lie again. At least for the sake of separation of its “authority” from the baseboard by a couple of millimeters.

Ctrl Enter
Noticed oshЫbku Highlight text and press. Ctrl + Enter
We are
Situational analysis of the death of the MH17 flight (Malaysian Boeing 777), made on the basis of engineering analysis from 15.08.2014Results of the week. “You are already indebted to the sea: neither the bottom nor the coast”
Military Reviewin Yandex News
Military Reviewin Google News
11 comments
Information
Dear reader, to leave comments on the publication, you must sign in.