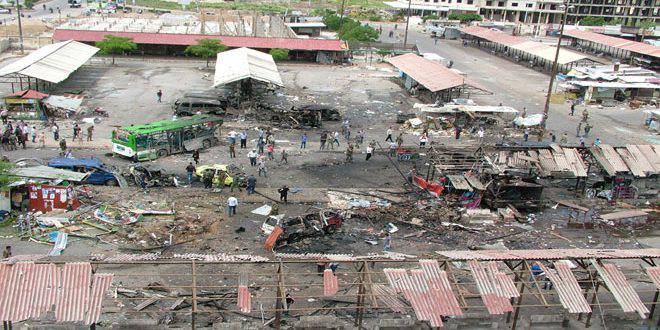 Among the fiery nightmare of the Syrian war, there are still small islands of tranquility, but death is also visited there. She does not come herself - it is brought by those who are called the "Syrian opposition." Including those groups that directly enjoy the support of Washington and its allies.

The cities of Jebla (Latakia province) and Tartus (the center of the province of the same name) have so far been islands of peaceful life. Thousands of mourning portraits, however, reminded of the war — against the background of the Syrian flag, the faces of the soldiers who gave their lives on the fronts. However, 23 May residents of these cities are directly confronted with a ruthless death.

Nobody expected this. Four explosions in Jebla and four in Tartus. In both cities, bus stations were attacked by terrorists. The attacks occurred in the morning, at the time of the greatest concentration of people. They are made according to the same scheme. So, in Tartus, a car bomb exploded first. Then among the crowd of people who tried to escape and escape, two suicide bombers blew themselves up - along with civilians. The same thing happened in Jeble. 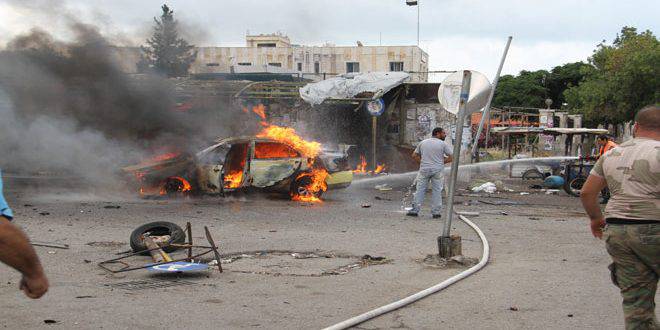 In addition, in Tartus, another explosion thundered near a busy shopping center. And in Jeble, an even more cynical attack was committed. One of the terrorists pretended to help deliver the wounded from the bus station to the hospital. And then - he blew himself up along with the doctors, nurses, patients.

According to the latest data, the number of people killed in this coordinated series of attacks reached 148 people. But the mournful list can be replenished due to the severely injured. Affected - a few hundred.

That is, we are talking about the largest terrorist act in the entire Syrian war and one of the largest in the world.

What is the reaction of the "world community"?

And it actually is not.

Syria, its leadership and people expressed their condolences to Russia, Iran, Belarus, Armenia and several other countries. Several banal phrases of condemnation were uttered by the UN Secretary General Ban Ki-moon - they say, he is concerned about the escalation of violence and urges all parties to refrain from attacks.

And where are those who once shouted: "Je suis Charlie"?

Immediately, two “opposition” forces claimed responsibility for this heinous crime. This is the notorious organization “ISIL” (“DAISH”), banned in Russia and in many other countries, as well as the Ahrar Al-Sham group, which is one of those considered in the West as “moderate opposition”. Who actually organized the attack? It is no secret that the various groups of the “Syrian opposition” in some cases conflict with each other, but by committing atrocities, they can show complete unanimity.

Only recently, Russia raised with the UN Security Council the question of including Ahrar Al-Sham in the list of terrorist organizations. The United States, France and Britain have blocked this offer. For them, “Ahrar Al-Sham” is “fighters against dictatorship”, “lights of democracy”, “rebels”.

Western leaders are constantly repeating, as if they were established: Syrian President Bashar al-Assad has no place in the political arena. But, in their opinion, on this very political arena there is a place for such groups of “moderate opposition” as “Ahrar Al-Sham”, as well as “Jaish Al-Islam”.

But earlier, on May 13, this same “moderate opposition” committed another terrible crime, which also preferred to keep silent about the West - the massacre in the village of Az-Zara in the province of Hama. Terrorists attacked a peaceful settlement early in the morning. They broke into houses and cut sleeping people, including women and children.

Washington continues to patronize "moderate" villains, cover up their crimes and frankly support them. “Progressive public” is in no hurry to put forward slogans: “Je suis Jeble! Je suis Tartus! And, maybe, right now in a hospital on the Syrian coast, in a flourishing city by the Mediterranean Sea, one of the civilians who were wounded in a monstrous series of terrorist attacks dies.

There, on the Syrian coast, live kind, hospitable, sincere people. Once I happened to be in a bus station in Tartus. No, not on the one that was blown up (this one is a new one, built quite recently), but on the other. It was necessary to go to Damascus, but it turned out that the buses no longer go. I had a thousand Syrian pounds with me, which was enough for a bus, but there was no question about a taxi - it cost three thousand. One of the girls, having learned that I was Russian, undertook to help, immediately the Syrians collected the necessary amount. I refused, but they lent them to me almost with force, with exclamations: “Shukran, Rusia!” (“Thank you, Russia”). And I had with me a chocolate, which I tried to thank the young Syrian, but she categorically refused. In general, they put me in a taxi, which brought the hapless traveler to the capital.

This bright memory hurt my heart when scary footage from a hospitable city, subjected to a barbaric, inhuman attack, appeared on the Web. Jebla also remembered, with its antique amphitheater, juicy fruits in the market near the bus station, sad portraits of fallen soldiers ...

Ctrl Enter
Noticed oshЫbku Highlight text and press. Ctrl + Enter
We are
Day of the national flag of the DPRSyria: Americans scare themselves, and Asma Asad buys chairs
Military Reviewin Yandex News
Military Reviewin Google News
10 comments
Information
Dear reader, to leave comments on the publication, you must sign in.