From the landfill - in the top ten


South Korea for 60 years after the end of the war with the North is in constant anticipation of a new armed conflict with the army of the DPRK. Seoul was able to create their own, no less powerful.

Until the end of the Cold War, South Korea’s defense depended entirely on the United States. Her own, although very large, was a dump of old American technology. With 90-x, the situation began to improve, and has now changed quite significantly. There was a significant diversification of imports of military equipment and, most importantly, mass production of their weapons, meeting the highest international standards, began.

The ground forces are divided into forces of central subordination (that is, directly to the General Staff), two field armies (PAs) and one operational command.

The forces of central subordination include six commands.

In response to the DPRK missile program, South Korea is developing its counterpart. At present, the NE is armed with at least 30 TR "Hyunmu-1" mobile (flight range - 180 kilometers) and up to 100 of mine-based "Hyunmu-2A" (300 kilometers). A large family of “Hyunmu” missiles with a range of 500 – 1500 kilometers are expected to enter service. All the MLRS can be used as PU for US TR ATASMS, of which there are 221. 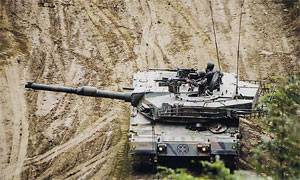 The actions of the fighters provide four AWACS aircraft based on the passenger Boeing-737. There are 28 reconnaissance and surveillance aircraft - the English 8 800, the 20 own KA-1 spacecraft. 4 US RF-5 and 13 RF-4 removed from the Air Force and are still in storage.

All 12 destroyers of their own: 3 type "Saojeon Tevan" (considered the most powerful in the world of surface non-avianosnyy warships), 6 "Chunmuhong Li Sunsin", 3 "Kvangetho." They are equipped with the "Aegis" system, are armed with a UVP on the 80, a Zuru "Standard", a UVP on the 32 SCC "Hyunmu-3" (comparable in terms of TTX to the "Tomahawk", but have a smaller range of flight) and 16 PLUR "Red Shark", as well as 4x4 of the Heson control panel. All of these missiles, except for the "Standards", are of their own design, albeit with American influence. The “Hyunmu-3” is in the same family as the “Hyunmu-1” and “-2” land-based, but formally, since the “land” missiles are ballistic and the sea-winged missiles (with a 1500 range of kilometers). Frigates type "Ulsan" (7 units, still 2 in the sludge) are considered obsolete. They are built to replace frigates of the “Incheon” type (now 4, no less than 18 is planned), which will also be armed with the SJLM “Hyunmu-3”. There are 18 cortex-type "Pohang" (still 2 in the sludge). 3 similar to them "Tonhe" are used as training. The 17 has been equipped with the latest Yun Yunha corvettes. The territorial waters and coast are protected by 63 – 75 patrol boats of the “Chamsuri” type, as well as by the coast guard, which includes 36 patrol ships and 39 patrol boats.

Mine-sweeping forces include the minzag "Wonsan", the 6 of the Italian minesweepers "Lerici" ("Ganjon"), the 3 of the minesweeper of their own construction, such as "Yangyang".

Over the past 20 years, first-class aircraft have been built in the Republic of Korea, capable of successfully resisting almost any army in the world in all three environments. Apparently, these aircraft are among the ten strongest in the world, especially given the high level of combat training. In the production are numerous samples of weapons and equipment. Together with the Russian Federation, long-range air defense systems are being developed, similar in TTX to C-400. All this provides a reflection of the strike of the North Korean armed forces. But Seoul’s army is incapable of capturing the DPRK, that is, militarily, the parties are in a state of strategic stalemate.

On the territory of the Republic of Korea there is a significant grouping of American troops: the 8-I Field Army Army and the 7-I Air Force of the US Air Force. The basis of the 8-PA is the 2-th Infantry Division, which includes the 210-th artillery brigade, 2-th support and army brigade aviation. In addition, the 8-th PA includes 501-I support, 35-I air defense, 501-I intelligence, 1-I communications, 65-I medical brigade. The 7-I BA includes the 8-e fighter (F-16) and 51-e wing (attack aircraft A-10).