The withdrawal of our main forces from Syria did not save the United States and its NATO allies from a headache. In the Western community, the work of the Russian means of electronic warfare is actively discussed. The reason for such close attention, apparently, is that our equipment is capable of closing large areas in which modern high-tech weapons and military equipment becomes ineffective.

This is very disliked by those who previously widely and successfully applied their EW facilities in Korea, Vietnam, Iraq and Afghanistan, Libya, and the Balkans. But the advantage in this area that consoled our "friends" is in the past.

The first to say this was the Americans themselves. In particular, Lt. Gen. Ben Hodges (commander of US forces in Europe), Ronald Pontius (deputy head of cyber command), Colonel Jeffrey Church (head of EW department of the ground forces), Philip Breedlove (at that time commander in chief of the united forces of Europe in Europe). With reference to the latter, the Daily OSNet publication reported that American troops and their NATO allies were blinded and deafed on the ground, in the air and in space - in a “bubble” with a diameter of about 600 kilometers in the area of ​​the Russian military group. Previously, according to Bridlava, Moscow “inflated” such “bubbles” over the Black and Baltic seas. He also spoke about the astounding possibilities of Russian EW facilities that are capable of creating large areas of А2 / AD (anti-access / area denial). They should be understood as a zone of guaranteed prohibition for the adversary’s access and any opposition to the use of its own weapons. Everything, as in the famous song of Edita Piekha: “I see nothing, hear nothing, know nothing, and say nothing to anyone.”

And what actually happened? We at one time did not hysteria about the use of Western EW in Yugoslavia or Iraq. Apparently, for such a nervous reaction of our sworn friends there are good reasons. Only a real effect could be a cause of the breakdown of those who do not even think about the possible superiority of Russia in some military matters.

With the escalation of the ongoing electronic warfare, it would be foolish not to use our capabilities to protect the Russian group and cause maximum damage to terrorist groups. After the destruction of our aircraft by a Turkish fighter, Lieutenant-General Yevgeny Buzhinsky, Deputy Director General for Foreign Economic Activities of Radio Concern Vega, OJSC, said: "Russia will be forced to use means of suppression and electronic warfare."

What exactly do we have in Syria? The first one can presumably be called the ground mobile complex “Krasukha-4”, which serves for setting up broadband active interference to suppress radio-emitting reconnaissance and data transmission equipment of space, air and ground-based systems at 150 – 300 kilometers. The complex is effective for countering radio-electronic means (RES) reconnaissance of Lacrosse and Onyx satellites, AWACS and Sentinel aircraft, as well as drones.

With a high degree of probability, we can talk about the use of the aircraft multifunctional complex electronic warfare "Khibiny", which became widely known after it completely crushed intelligence and command and control systems, as well as the Aegis missile defense system of the American destroyer "Donald Cook" in the Black Sea. "Khibiny" can be a group means of protecting aircraft from all existing anti-aircraft and aviation means of destruction. In this capacity, the complex proved itself to be the best in 2008 during the operation to force Georgia to peace.

In September, two electronic reconnaissance aircraft and an electronic warfare type Il-20 arrived at the Khmeimim airbase. With a complex of various sensors, antennas and other optical-electronic means, these machines are capable of solving assigned tasks during 12 flight hours in any weather and climatic conditions, day and night. The transfer of the Borisoglebsk-2 complexes to Syria, which today are among the most complex in the world in its class, has also been reported.

To create an electronic umbrella on the border with Turkey, other advanced EW tools could be used. For the suppression of radar, disruption of the guidance, control and communication systems - complexes such as "Lever", "Moscow", "Mercury", "Pobershchik". The latter is based on IL-22, which is equipped with side antennas and a cable unwinding in flight a few hundred meters with a transmitter. Along with these EW tools, fired disposable aiming jammers could also be used to protect our airplanes and helicopters.

It is impossible to exclude applications for combating radio-controlled land mines, improvised explosive devices and high-precision weapons, as well as for disrupting cellular communications and in the VHF range of the Electronic Electronic Equipment "Infauna" and small-sized Lesochek type interference generators. The media reported on the likely demonstration of the capabilities of active stations "Lever-AV" and "Vitebsk". The first can be installed on any military equipment and suppress the enemy’s command and control and air defense systems.

According to the Chief of the Electronic Warfare Troops of the Armed Forces of the Russian Federation, Major-General Yuri Lastochkin, the developed tools allow for the possibility of radio intelligence and radio suppression of communication systems for collective use, covert, selective blocking of the cellular terminals of the enemy. Experts believe that EW systems approximately double the capabilities of ground troops and increase the survivability of aviation by 25 – 30 times.

You will not drown this song ...

Taking into account the potential and purpose of our EW facilities, one of the main tasks in Syria was to cover the Russian military group and the Khmeimim airbase from possible air and ground strikes, as well as to protect personnel and equipment from being hit by radio-controlled land mines and improvised explosive devices. 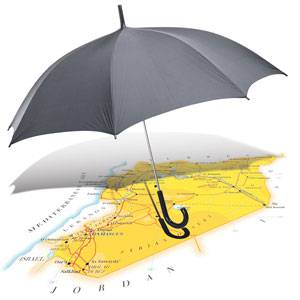 The effectiveness of the solution in this case is closely related to measures to protect its radio electronic components from technical intelligence and electronic suppression. The need for this is due to the known facts of the transfer of intelligence information to the armed opposition and terrorist groups by the special services of Turkey, the United States, Saudi Arabia and other countries.

Other equally important tasks of the EW facilities are the constant monitoring of the radio-electronic situation in the areas of their grouping and Khmeimim airbase and the strict observance of the electromagnetic compatibility rules to ensure the normal functioning of its own radio-electronic means.

To ensure high-precision fire destruction of command posts and other important objects, the problem of determining their location was solved by establishing the coordinates of the radio-emitting means located on them. It is also known about the suppression of ground-based and space-based radio communications, drones control channels and data transmission from them.

Finally, an information confrontation on the air using EW tools became an important condition for reconciliation of the warring parties.

Thus, Syria turned out to be a testing ground, where in real combat conditions, including in the confrontation with the RECs of developed countries of the West, important experience was gained. It allowed us to identify the strengths and weaknesses of our technology, to become the basis for further enhancing the capabilities and methods of its use. Much, for obvious reasons, remains outside the framework of publicly available information. But what is already known allows us to draw some conclusions.

The first, and probably the main one: EW facilities is one of the main asymmetric means of waging new generation wars. In the West, they are persistently referred to as hybrid and are trying to shift their authorship to Russia. Today, they accuse us of allegedly the first to wage such a war, which resulted in the annexation of the Crimea. But much earlier, there was a “contactless” aggression of the western coalition led by the United States, as a result of which the united Yugoslavia ceased to exist. And it was precisely the hybrid wars, planned and unleashed by the same forces, that turned out to be the cause of the present dismal fate of Afghanistan, Iraq, Libya, the situation in Syria and the disastrous situation of refugees in Europe. It is obvious.

The main capabilities of the EW tools should be as hidden from potential enemies as possible, and the tactics of their use should be based on surprise. This will not allow to take proactive measures, and together with the principles of massiveness, focusing on the main direction (priority objects) will ensure the achievement of goals.

It is also extremely important that domestic components should be the basis for creating our EW tools. Otherwise, as experience shows, this can become our sore point, which opponents will not fail to hit with sanctions. A vivid example of this is the state and combat readiness of the main samples of Syrian equipment, which today is 50 percent and below.

With further improvement of domestic EW assets, it is imperative that their selectivity and targeting of the impact on the enemy's electronic distribution system should be increased. This will minimize the negative impact on the operation of its electronic systems.

Currently, one of the main areas should be considered the active development and creation of EW tools with millimeter and terahertz frequency bands. Today, they are being actively mastered by new generation RES and high-precision weapon manufacturers. What will it give? So, if in the lower bands there can be 10 working channels, then there are already hundreds of them at the 40 GHz frequency. Consequently, for their "closure" will require more sophisticated automated EW tools.

Another important conclusion: The West is concerned about our success in this area and is stimulated to improve its EW tools, their methods of application. Finances for this, one can be sure, our “friends” will find, especially in the conditions of incessant anti-Russian hysteria. Therefore, the obtained very valuable combat experience should be maximally used by the military and manufacturers of EW equipment for its further development and preservation of leading positions.

Russia made the right conclusions on the basis of the war with Georgia in 2008. The current success confirms this. Today, according to Yury Lastochkin, our EW equipment is superior to foreign analogues in range, range of objects of influence, and other parameters. At the same time, the share of modern weapons and military equipment in the EW troops is 46 percent. On the state defense order delivered about 300 main and more than a thousand small-sized means of electronic warfare.

Some in the West, not without a share of gloating, relished information about the latest Turkish EW system “Coral” (Koral), which supposedly would nullify the capabilities of our C-400 air defense system. Without a hint of embarrassment, they took for granted the statement of the General Staff of the Turkish army, as if it would disable all Russian radar systems in Syria. Indeed, the Coral with a range of about 150 kilometers is designed to suppress modern ground-based, sea-based and airborne radars. But, first of all, those who are at least a little familiar with the specifics of our anti-aircraft missile systems can say that they are created taking into account possible radio-electronic countermeasures. Secondly, there is still no proven evidence of Coral’s capabilities. Thirdly, the C-400 ZRS has already implemented highly effective measures of protection against interference, which will not allow us to stifle our funds.

The report of the US Army Directorate for the Study of Foreign Armed Forces noted that today Russia has great potential for EW, and the political and military leadership understands the importance of such means of warfare. “Their growing opportunities to blind and disable digital communication systems can help them (Russians - AS) to equalize forces in the fight against an opponent that is superior in strength,” the document stresses.

Ctrl Enter
Noticed oshЫbku Highlight text and press. Ctrl + Enter
We are
E-war - myths and truth85 years of hard work for the benefit of the motherland
Military Reviewin Yandex News
Military Reviewin Google News
281 comment
Information
Dear reader, to leave comments on the publication, you must sign in.