25 May 2016
27
How often do we, who seem to be following the political life of a country and the world, manage to “ignore” obvious things. It seems like not very important events occur ... Here is the confrontation with NATO - it is important. Events in Ukraine is important. Russian-American relations are important. And the rest is routine. The usual relationship of neighboring countries. Ordinary contracts, agreements, meetings ...


In fact, we, like a troika of horses, "covered our eyes with blinders." We see ahead, but not on the sides. In order not to be distracted. We are used to "hit the tails." Speaker Obama - our answer. Ukraine is once again trying to spoil in our direction - our answer. Balts ... Again the answer. Sometimes hard, sometimes funny, with malice. But the answer is.

Meanwhile, we have areas that have already become a huge "thorn" in Western politics. A sort of permanent stimulus and brake for some actions. Like a sliver in the buttock. While walking or standing like nothing. There is. But when you want to sit down ... You understand that this is quite a problem sliver.

But the worst thing about this example is that a sliver is there. Where it is located is also known. Under what conditions will cause the pain - too. But to get it from this very place without outside help is impossible. And it’s indecent to ask a stranger for such a service, given the piquancy of the location of the object.

Why did I talk so tediously about the anatomy of "over-success" and "over-treatment"? Just because today, somehow undeservedly little attention is paid to the brainchild of several countries, including Russia - the Shanghai Cooperation Organization.

This organization is now one of the serious “thrusts” for Western politicians. Let me remind you that the members of the organization today are Russia, China, Kazakhstan, Kyrgyzstan, Tajikistan and Uzbekistan. In addition to full members, there are still observer countries. For the time being, these countries are only on the path to joining the SCO. 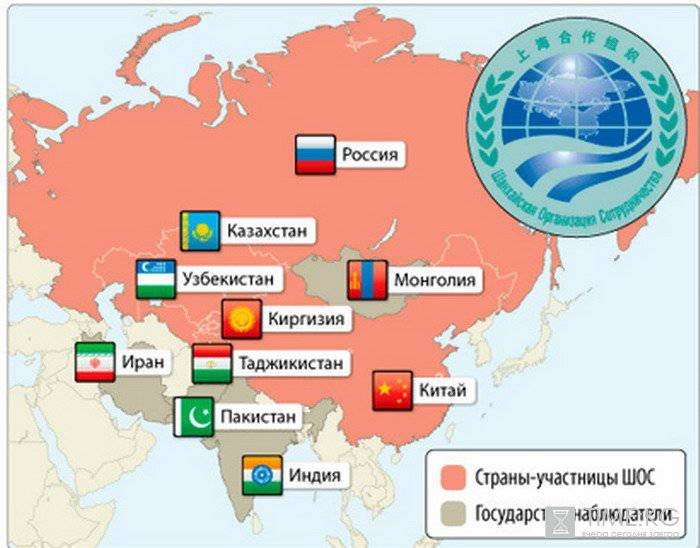 Some readers now smiled skeptically after reading the list of SCO members. Two great powers and several sided. This means that Russia and China will “pull the ears” of the rest into a bright future. Again at our expense to make someone happy.

Alas, but in order to understand the essence of the association, you just need to look at the map. And you immediately understand that, for example, all the conversations of Ukraine, Georgia, Turkey, Azerbaijan and some other countries about the "new silk road" are nothing more than a "carrot before an ass". Information to create "hope for the best."

Let me remind you of some of the documents adopted at last year’s SCO summit in Ufa. Remind it is purely concise, because I am sure that those who are interested have already dismantled these papers "by letters" a long time ago.

1. The SCO members advocate non-interference in the internal affairs of countries. Territorial integrity and national traditions in each country. But the SCO will not allow hostile actions against its members.

2. The SCO members will interact in legal matters and human rights issues. At the same time respecting the cultural and national identity of each nation.

3. The SCO members are in favor of reforming the UN Security Council in order to enhance the effectiveness of its work.

4. "Special attention will be paid to cooperation in countering the activities of international terrorist organizations aimed at involving the citizens of member states (SCO) in terrorist, separatist and extremist groups."

5. "An important direction of collaboration will be cooperation in the field of infrastructure modernization and logistics."

6. "This concerns the protection of intellectual property rights; the exchange of information about goods and vehicles moved across the customs border, interaction in the development and application of the risk management system."

Thus, Russia and China, together with other members of the SCO, have created a system that practically controls Asia. Namely, almost the entire Asian continent.

Of course, I will be objected. The author writes about the "northern route" from Japan to Europe. But there is also the "southern path". The one that most recently tried to test the Ukrainians "floating train". There is in fact another way through Iran, Afghanistan, Pakistan, India. And here our possibilities, alas, are not limitless.

I use the "purely Russian" answer to these objections. Well no! The author knows what he is writing about. And they know this in our government and the Foreign Ministry. I will not write about the president. Moreover, they have already taken certain steps to solve the problem.

Namely, this issue will be considered at the SCO summit in Tashkent 23-24 this June. It will be a question of full-fledged admission to the SCO members of India and Pakistan. And, according to the special representative of the Ministry of Foreign Affairs of the Russian Federation in the SCO, Bakhtier Khakimov, Minister Lavrov intends to raise the issue of Iran’s membership. The lifting of sanctions from this state automatically eliminated the obstacles to entry. And the desire of Iran was from the very beginning of the creation of the organization.

By the way, there is another country worth mentioning. Small but important. And dad there is important. Still, the center of Europe. I am about Belarus. She is also an observer. Until. Probably until the next summit ...

A meeting of the foreign ministers of the participating countries and observers of the SCO has opened in Tashkent today. Naturally, the conversation will be quite serious. Preparation of the meeting of the first persons of the states. So, we are waiting for the final meeting document.

Whatever may be said about the role of our country in world politics, our homegrown and foreign russophobes, Russia is becoming more and more a country to which they are drawn. The country they are hoping for. A country that is believed.

Nice damn it! The Russian bear begins to actively communicate with the Indian cow, the Pakistani leopard, the Chinese dragon and other neighboring totems. An interesting fold "pack." Like Kipling in Mowgli. It remains to declare a universal principle: "We are of the same blood with you! You and me!"

But the Sher Khan and the Red Dogs are worth thinking about. Is it worth it in the taiga or jungle to climb. Akela, as events in Syria have shown, is. Kaa - too. Even Bagheera and Balu available. Maybe you should not look for that Mowgli? It is troublesome.

Ctrl Enter
Noticed oshЫbku Highlight text and press. Ctrl + Enter
We are
Prospects, subtleties and difficulties of the formation of the SCO PRO, or when the observers are closer to the participantsTrojan horses in the SCO?
Military Reviewin Yandex News
Military Reviewin Google News
27 comments
Information
Dear reader, to leave comments on the publication, you must sign in.