General G. Carlisle: the threat from the Russian and Chinese aircraft increases

25 May 2016
19
The deterioration of the international situation leads to unpleasant consequences of a military and political nature. Increasingly, there are reports of interception of aircraft of foreign countries in certain areas. This situation seriously worries both heads of state and military leaders. They express their opinion on current events both in official statements and in the framework of press interviews.


22 in May, the US edition of USA Today has published an interview with US Air Force General Herbert Carlisle, who heads the Air Force Operations Command. The article with the saying headline “Threat from Russian and Chinese warplanes mounts” indicates that recent events in the airspace of different regions were the reason for the conversation with the general. Chinese and Russian warplanes with greater aggression began to intercept the US, and in addition, increased patrols near the west coast of the United States.

Herbert Carlisle told USA Today that the current situation with the interaction of Chinese, Russian and American aviation in international airspace is important, but at the same time dangerous. American military leaders are concerned about the resurgent military power of Russia, as well as China, which, in their opinion, is very aggressive. 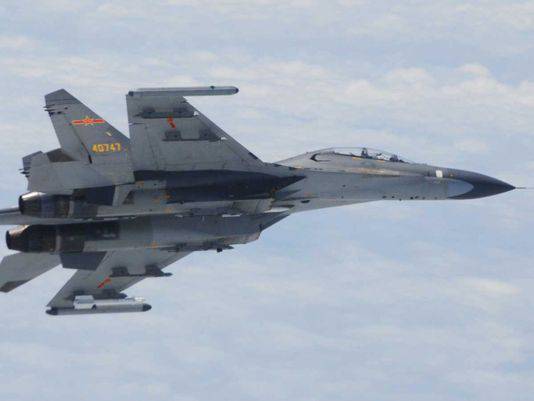 Both countries intend to expand their spheres of influence. Russia defends its interests in Eastern Europe, and China intends to act in the Pacific Ocean, with special emphasis on the disputed islands of the South China Sea. According to G. Carlisle, Russia and China have a simple goal: to oust the United States from these regions. Official Moscow and Beijing wish to individually control international airspace in the regions of interest to them, preventing the United States from going there. The general believes that the US military should not allow such a development.

The commander of the air operations considers it necessary to continue work in the international airspace and in the neutral waters of the oceans, despite the interests of third countries. In addition, if China or Russia resorted to aggressive and unsafe actions, the American side should speak directly about it.

In the current situation, the stakes are very high. Aggressive interception of US patrol aircraft can have negative consequences. There is a risk of aircraft collisions in the air, which will lead to an escalation of tensions between the most powerful powers of the world.

In this context, USA Today quotes Loren Thompson, defense industry consultant and military analyst at the Lexington Institute. This expert believes that any accident resulting from the “cat-and-mouse game” of the American, Chinese and Russian armed forces risks developing into a real conflict. In this specialist notes the negative features of this collision. In the event of the start of a full-scale confrontation, American ships and aircraft will have to act at a great distance from their bases. At the same time, the enemy of the United States will be able to operate from its own territory. Small clashes can escalate into major wars, and the new defense doctrine of Russia, as L. Thompson recalls, does not preclude the use of nuclear weapons to win in local conflicts.

General G. Carlisle points to current trends in the interaction of US forces with foreign armies. Thus, in recent months there has been an increase in the number of interceptions of American aircraft by fighters of Russia and China.

One of the results of this practice was the Pentagon’s condemning statements related to interceptions for about a year. However, the official words of the US military did not change the situation. So, on May 17, a pair of Chinese fighters passed dangerously close to an American patrol aircraft that was in over the South China Sea. At present, China intends to expand its sovereignty to this area, for which, in particular, it is building several artificial islands near disputed territories.

G. Carlisle also reminded that at the end of April, the American reconnaissance aircraft RC-135 was flying over the Black Sea when it was intercepted by a Russian fighter. The Russian pilot not only accompanied the conditional goal, but also carried out the “barrel” maneuver, which was the reason for criticism from the US military and led to accusations of provoking an emergency.

General G. Carlisle raised another topic concerning air confrontation. Simultaneously with the interception of American aircraft, Russian aircraft patrols in remote areas. There has been an increase in activity in patrolling in areas of Eastern Europe and the US West Coast. In the latter case, the aircraft pass along the entire country, up to the coast of California.

The main risks in the context of relations between the United States and China relate to the situation in the South China Sea. Several countries in the region, including China, are claiming a number of islands. Official Beijing not only makes claims to the ownership of these territories, but also builds artificial islands near disputed land areas.

G. Carlyle believes that in the near future, China will deploy over the entire water area of ​​the South China Sea identification zone of air defense. Thus, entering this area, all aircraft will be forced to identify themselves and transmit data about their location. A few years ago, the United States had already launched a similar system, which was the reason for another exchange of unfriendly statements. In addition, in 2013, China launched an air defense identification zone in the East China Sea.

The American commander suspects that China may simply seize the disputed islands and declare them as his own. Such a technique can later be used to connect other territories where it is possible to deploy the necessary systems. According to the general, the Chinese administration implements its plans so that its actions cannot be fully considered and evaluated in terms of existing norms.

Preserving ties with the Russian and Chinese command, according to G. Carlisle, is a key task, the solution of which will allow to avoid various unpleasant incidents. At the same time, American pilots will also be trained in view of the possible interception by fighters of third countries. The growth of aggression from the pilots of foreign countries leads to certain risks. This must be considered.


The article "Threat from Russian and Chinese warplanes mounts":
http://usatoday.com/story/news/politics/2016/05/22/threat-russian-and-chinese-warplanes-mounts/84673228/