Press Service of the Ministry of Defense of Ukraine: "Until the 2020 of the year, the country's Navy will receive 30 of new ships and boats"

24 May 2016
90
The Ministry of Defense of Ukraine spreads the message that by 2020 Ukrainian enterprises will build three dozen ships and boats for the country's Navy. Oksana Gavrilyuk, the head of the communications and press department of the main military department of Ukraine, said that the events will be held as part of the “building up the capabilities of the Ukrainian naval personnel fleet». 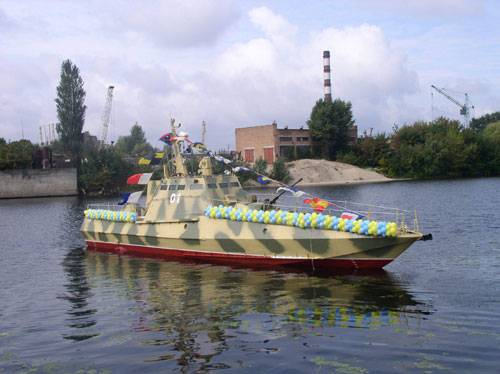 From the message of Oksana Gavrilyuk, published by the press service of the Ukrainian military department:
Capacity building of the ship staff continues. By order of the Ministry of Defense of Ukraine, two small armored artillery boats were built for the Ukrainian Navy, and production of four more continues.

It is noted that the Ministry of Defense of Ukraine placed an order for the construction of two amphibious boats at the enterprise “Plant“ Leninskaya Kuznya ”. It should be recalled that the actual owner of this shipbuilding enterprise in Ukraine is President of Ukraine Petro Poroshenko. Attention is drawn to the fact that today this enterprise is preparing to go through the process of “de-communization” - at the end of April a competition was announced for a new name for the plant. The company accepts applications for renaming to e-mail [email protected]

From the statement the press service of the Ministry of Defense "Square":
According to the decision of the Minister of Defense of Ukraine, work continues on the development of a new Navy patrol aircraft An-148MP. Approximate deadline for adopting it - 2019 year.

Ctrl Enter
Noticed oshЫbku Highlight text and press. Ctrl + Enter
We are
The action “Military service under the contract is your choice!” In Rostov-on-Don: future contract servicemen, exhibitions and “Russian Knights”
Military Reviewin Yandex News
Military Reviewin Google News
90 comments
Information
Dear reader, to leave comments on the publication, you must sign in.