24 May 2016
214
On the official YouTube-channel of the German concern Rheinmetal a video appeared on which the new MBT Revolution tank is being demonstrated, reports Rossiyskaya Gazeta. 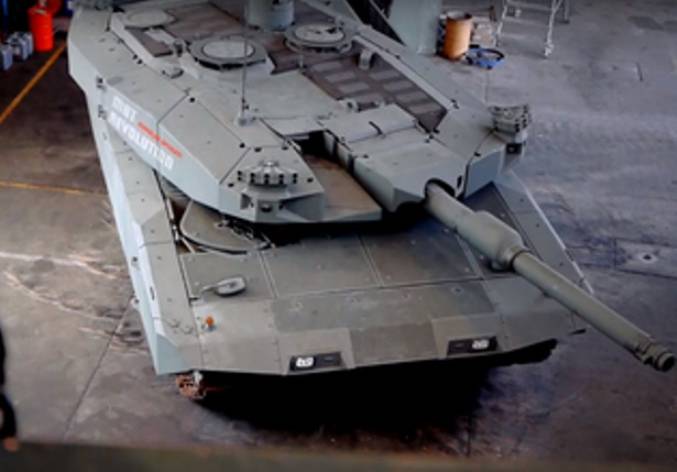 According to the developers, MBT Revolution should become a “serious competitor of“ Almaty ”, but this will not happen before 2030.

In fact "The model is a deeply upgraded version of the Leopard 2A4 using modular technology. Moreover, it should replace not only its predecessor in Germany, but also the Leclerc tank, which is in service with the French army ", notes the newspaper with reference to warspot.ru.

The concern has been working on this project for 6 for years, and the video is yet another report on the progress achieved.

“Already from the first frames you can understand that the tower tank, thoroughly "stuffed" with electronics. These are video cameras, guidance systems that provide the crew with an all-round view. The gunner's dashboard is fully computerized. The tower is also equipped with an active defense system, ”comments the publication.

The developers and the weapon stabilization system noted: “when the car moves over rough terrain, the gun remains almost stationary,” the commentary says.

As the designers explained, the tank "is adapted to any climatic conditions and can fight both day and night."

Ctrl Enter
Noticed oshЫbku Highlight text and press. Ctrl + Enter
We are
Crusade upgrades: the West intends to extend the life of their military equipmentNew Chinese tank MBT-3000 will be ready in two years
Military Reviewin Yandex News
Military Reviewin Google News
214 comments
Information
Dear reader, to leave comments on the publication, you must sign in.